Last week's extraordinary tale regarding the Hebridean White-throated Needletail (recounted here) drew plenty of positive response from readers, particularly those who had been lucky enough to connect with one of the few previous occurrences of this exhilarating central Asian species. Of those, the 1984 Shetland (Hillwell, 25th May — 6th June) and 1988 Orkney (Hoy, 28th May — 8th June) were the most 'available' to twitchers. Here, Nigel Wheatley and Mike Cartwright share their own experiences surrounding each bird. Firstly, Nigel takes up the story on 2nd June 1988:

"The epic news was relayed by Alun Hatfield, early Thursday morning. He then spent the whole day on the phone making sure the team had places on the ferry to Hoy. Well behind schedule, Al, Tony Clarke and Robin Chittenden (all from London) picked me up at 10:30pm near Reading and we headed north, picking up Ian Ricketts on the M6. Worried about the lack of time, we stopped only for fuel and zapped along at a steady ton. At Inverness, we landed on a roundabout and some way north very nearly met our doom when the car refused to round a corner — we only stopped two feet short of a barrier that overlooked a nasty cliff.

So, it was with some relief that we finally got out the car at John O'Groats to news of a Pallas's Rosefinch on North Ronaldsay. Absolute pandemonium set in. Eventually it was agreed to try for the swift first, so we boarded the ferry and crossed to Hoy — Tysties, Arctic Terns, Arctic and Great Skuas, Puffins and a European Storm-petrel were seen en route. Once on Hoy, we were taken to Melsetter House in a fleet of rusty cars and minibuses. Alas, an hour of no joy and the time came for us to make a decision about catching the ferry to North Ronaldsay. Never had I seen so much uncertainty on a twitch, as people ummed and ahed about whether to head for North Ron or not. I could barely afford the cost of getting to Hoy, let alone an extra ferry trip on top, so I remained on Hoy as the other 25 or so rushed off north once more.

Back at the mansion, all were asleep in the garden on my return. I went scanning from a nearby lane and, at 5:30pm, suddenly clapped eyes on a tiny black-and-white rocket bombing across the fields — "there it is!". I hurried back to the house to relay the news to everyone only to find the bird already there, swooping in, low, and back out again! 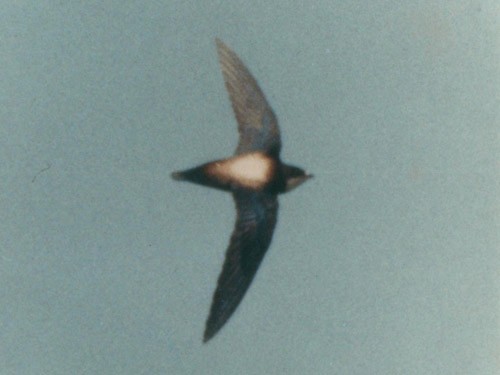 We moved out on to the lane and there it was, the White-throated Needletail — working the flies and bees along the edge of the sycamore stand with unbelievable speed and agility. One slight movement of the wings acted like a turbo switch as it shot high in to the sky. It would occasionally swoop low over the field, giving supreme views of its coppery-edged silver mantle in the sunlight, but spent most of the time working up and down the garden edge — the chocolate belly, white 'arrow' and forehead all observed well as it turned just a few feet away, frequently sweeping past our heads with a 'whoosh'! With many of the 'tickers' heading off, just five of us were left to enjoy the bird until 9pm when, after three unsuccessful attempts to land on the building, it disappeared. We retired to the local hostelry for some much-needed food before returning to the mansion, where the very friendly owners let us sleep in their summer house.

The Liverpool crew departed early on the Saturday, leaving me alone with the swift on this beautiful island. I enjoyed it for much of the morning until, just as I was about to tuck in to some surprise sandwiches and coffee brought out to me by the mansion owners, the Rosefinch twitchers reappeared. I said, "follow me", and we all ran down the lane — they soon gave a great roar of approval as the bird made its first pass over their heads at the garden edge. 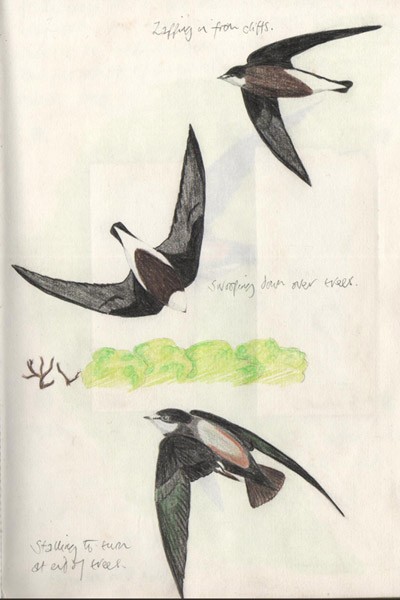 The Needletail went straight to the top of many people's list of British favourites (mine included) for it was an aerial delight — a "flying Killer Whale" according to one observer. We happily returned to John O'Groats and drove merrily home to a welcome bed, bath and larder. It was, in short, an epic encounter."

The Pallas's Rosefinch Nigel mentions was never accepted on to Category A of the British list. Nigel added that, shortly after the swift, he (among others) headed down to Clevedon to see a Black-winged Pratincole on 12th June before, on 3rd July, they were on Anglesey for a Bridled Tern at Cemlyn. Coincidentally, both species have been recorded in Britain in the week following the Harris bird..!

Four years before the famous Hoy Needletail, what could potentially have been the same bird spent almost two weeks in the Hillwell and Quendale area of Shetland. This was a time long before any sort of bird news information service existed, and as such Mike Cartwright had no idea of the presence of the bird as he began the long trip north to spend a week on Fair Isle. Mike takes up the narrative:

"My story starts on 28th May 1984. Having travelled to Aberdeen by train and boarded the St. Claire for Shetland, I was full excitement for what might unfold in the coming week that I had booked to be on Fair Isle. Nobody on my limited 'grapevine' had of any news from Shetland, and of course there were no news services back then, either. As we left Aberdeen I stood at the back of the boat with two other birders watching a glorious evening unfold, though there was little in the way of seabirds.

We immediately got chatting. They were having a birding holiday on Shetland, hoping to see the Black-browed Albatross at Hermaness and the four female Snowy Owls on Fetlar among other things. Although I had seen these before I felt envious of them; what if I went all the way to Fair Isle and saw nothing?! They were envious of me, though, and suggested I might see something amazing like a Cretzschmar's Bunting!

Having started to talk about rarities, they then told me about a conversation they had with Bobby Tulloch the previous day: a couple of days previously, Needle-tailed Swift had been seen and photographed by Dennis Coutts while he was supposed to be photographing a wedding at Loch of Hillwell, but they had had no further news since. We all stood in awe, contemplating the bird and then had a laugh at what the wedding photographs must have been like — assuming there were any!

We reasoned that this highly mobile species would have long since departed — as swifts tend to do — but hoped there might be something else found up there. Never having heard of Loch of Hillwell and assuming it to be north of Lerwick, I was surprised to hear it was at the south end of Mainland. I needed to get to Grutness — at the southern tip — to catch the Good Shepherd to Fair Isle. A plan was hatched: they would very kindly give me lift and we would have a look at the loch, even if it was simply to pay our respects to this amazing bird rather than hope to actually see it. After all, that was too much to hope for given that there had been no news for a couple of days.

After docking the following morning, we journeyed south in a small, blue hatchback. I was in the back, completely submerged by luggage and rucksacks and surrounded by condensation-covered windows. Eventually we were driving along the north side of the loch, and I wiped a small hole in the condensation to reveal the outside world: there were some hirundines but then, as we bumped along further, I caught a glimpse of a huge pale-backed swift that was moving very fast. Disbelief...no, it really is! Panic!

The car jolted to a stop. I tried to get out — there were only three doors; I couldn't.

I couldn't see for mist, lack of space and sheer excitement.

At which point it zoomed back past me.

From outside it must have looked hilarious as the three of us and various bags exploded from the poor little car. But no mistaking it, there was the Needletail, putting on the most exhilarating of displays and to just the three of us! Its stunning speed and beautiful markings — the wonderful greenish sheen to its upperparts, the huge white undertail and chin offset by dark brown — were just incredible. I don't know how long we watched it for — I sort of slipped into another dimension; I think it was for a good few minutes, but equally it could have been seconds or weeks. We were all captivated, in awe and totally numb. It gradually started to make each pass a little higher and when it eventually departed to the northwest I knew that this was an experience that would never be repeated. 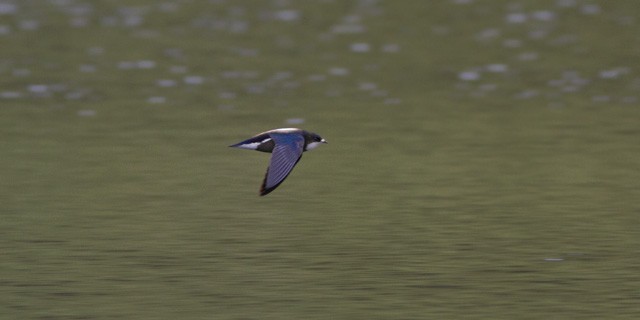 At the time, of course, we had no idea that it had been faithful to this spot. We looked at each other, the abandoned luggage and car. The incredible realisation of what we had seen cut through the peace of the loch; we were stunned. It was some minutes later, as we re-engaged with an Earthly time zone and the beautiful loch now calm but somehow incomplete without its spectacular guest, that we realised that a Corncrake was calling on the other side and probably had been doing so the whole time!

Even to this day this is still the rarity that I have had the most luck with. It would have been so easy not to have seen it in the short time I had available. In fact, I could easily have never known about it. This finally dawned on me when the Good Shepherd docked on Fair Isle and I was met by Nick Riddiford, who wasn't able to leave the island and had the most agonised look on his face. "Do you know about the Swift?"

That afternoon was spent on top of the cliffs looking down into one of the geos and watching a Subalpine Warbler among the Thrift and Sea Campion in exquisite light, ending a truly memorable day. Nearly thirty years on, the Needletail remains one of my most treasured memories — though the memory had dimmed over time, the events of last week totally reignited my own recollections. It could have been yesterday!"