With its bold face and underparts patterning and distinctive blood-red flanks and underwing coverts, Redwing is one of our most-loved winter visitors. This delightful thrush has a large continental breeding range extending across the boreal and birch zone from Scandinavia eastwards to the Kolyma River in eastern Siberia. A few pairs also nest annually in Scotland.

From this vast area, birds head south and west in autumn to winter throughout central and southern Europe and south-western Asia, some even reaching North Africa. The species is highly nomadic and shows a distinct lack of attachment to any particular wintering area.

There is, however, another population of Redwings (comprising between 100,000 and 300,000 pairs) which breeds in splendid isolation on Iceland and the Faeroes and which migrates south-east to winter along Europe's western seaboard, mainly in Ireland, western France and north-west Iberia. This population differs in both its average size and plumage and is treated as a distinct subspecies: Turdus iliacus coburni.

Redwing (Lewes, East Sussex, 8 January 2010). Redwings are beautiful thrushes, and particularly welcome when they visit our gardens in hard weather. Here they can be easier to watch than when in the open countryside, allowing us to appreciate their complex plumage: a striking buffy supercilium, strong dark malars leading into thick underparts streaking and the characteristic blood-red patch on the flanks (Lisa Geoghegan).

In Britain, nominate Redwings from Scandinavia and Russia are the quintessential late autumn migrant, typically arriving en masse with Fieldfares and Blackbirds along North Sea coasts and then heard across the country giving their distinctive tseeeee calls from the night sky. In winter they are a familiar inhabitant of farmland and woodland, resorting to suburban gardens in hard weather.

By contrast, Icelandic Redwing is seen almost exclusively in Scotland, down Britain's western fringe and in Ireland. Away from here, this subspecies is surprisingly little known and is considered rare in eastern counties. Here, and indeed anywhere away from the west, it represents an exciting target, providing a real opportunity to add to our knowledge of its vagrancy status.

With recent records from The Netherlands and Heligoland (where it is described as scarce but regular), it is surely under-recorded in eastern England. It is best looked for in late autumn, perhaps particularly when north-westerly airflows bring other Icelandic birds like Whooper Swans and Pink-footed Geese or wanderers from Greenland such as Lapland Buntings and Greenland and Hornemann's Arctic Redpolls.

As noted above, Icelandic Redwings differ a little in average size from Scandinavian birds, with a minority being longer winged than the longest-winged nominate birds. However, most fall within an overlap zone. Nevertheless, a long wing on a trapped bird (or a heavy weight) is indicative of Icelandic Redwing and any such individual should be carefully examined.

Although bill length does not differ between the two subspecies, Icelandic Redwings sometimes appear (at least to my eye) quite strong billed with a deeply curved culmen. Maybe this is a subtle supporting feature?

In the field Icelandic Redwings are best identified by a suite of plumage features rather than by any single diagnostic character. They are on average (compared with nominate birds) a darker, more earth-brown tone above, with more buffy hues in the fore-supercilium and more solidly dark brown ear coverts. The underparts ground colour is more buff and the malar and breast and flank streaking is warmer brown and heavier and more blurry, coalescing to form a rather smudged pattern, which is especially dense on the breast.

The undertail coverts are often more heavily marked, with broad dark feather centres forming prominent chevrons. As for the bare parts, the legs can be dark brown, paler than the fleshy-pink of nominate birds.

However, Icelandic Redwing poses a conundrum familiar to those with an interest in subspecies. It is (just like Scandinavian birds) somewhat variable and while the more 'extreme' examples can be relatively straightforward to identify, others may be less so, falling into an overlap zone, and will ultimately resist identification. For example, it is not unusual to find birds in Iceland with a rather paler and less well-marked appearance than 'normal' with, correspondingly, some Scandinavian birds appearing darker and more heavily marked than others. As a result, it is best to identify only the most 'obvious' examples (particularly away from the west) and let other less distinctive candidates 'get away'.

It is also worth mentioning the risk of potential confusion with four much rarer thrushes: female Dusky, Naumann&#39;s, Black-throated and Red-throated Thrushes. This risk is, to be sure, pretty small. Even the commonest of these – Black-throated Thrush – is a major rarity which most of us will never find in a lifetime, while the other three species are in a rarer class still. Nevertheless, it is a good discipline to check thrushes thoroughly and a poorly seen rare thrush could easily be 'thrown away' as a Redwing.

Female Black-throated and Red-throated Thrushes are moderately streaked dark below but, in truth, do not otherwise greatly resemble a Redwing. Their relatively bland face pattern and lack of red in the flanks should readily distinguish them.

Female Dusky and Naumann's Thrushes are much more Redwing-like, with a similar size and structure, a similarly long and bold creamy supercilium and bold markings (albeit in the form of chevrons – dark in Dusky and reddish in Naumann's) on the underparts. A brief or poor view could easily suggest a Redwing.

If in doubt check the underparts properly – Redwings are obviously and heavily streaked dark below and have the 'give-away' red flanks. If the underparts are obscured, look for pale or rusty panels in the greater coverts, tertials and secondaries. If absent, Redwing is the likely answer. If they are present, however, it's time for a closer look! 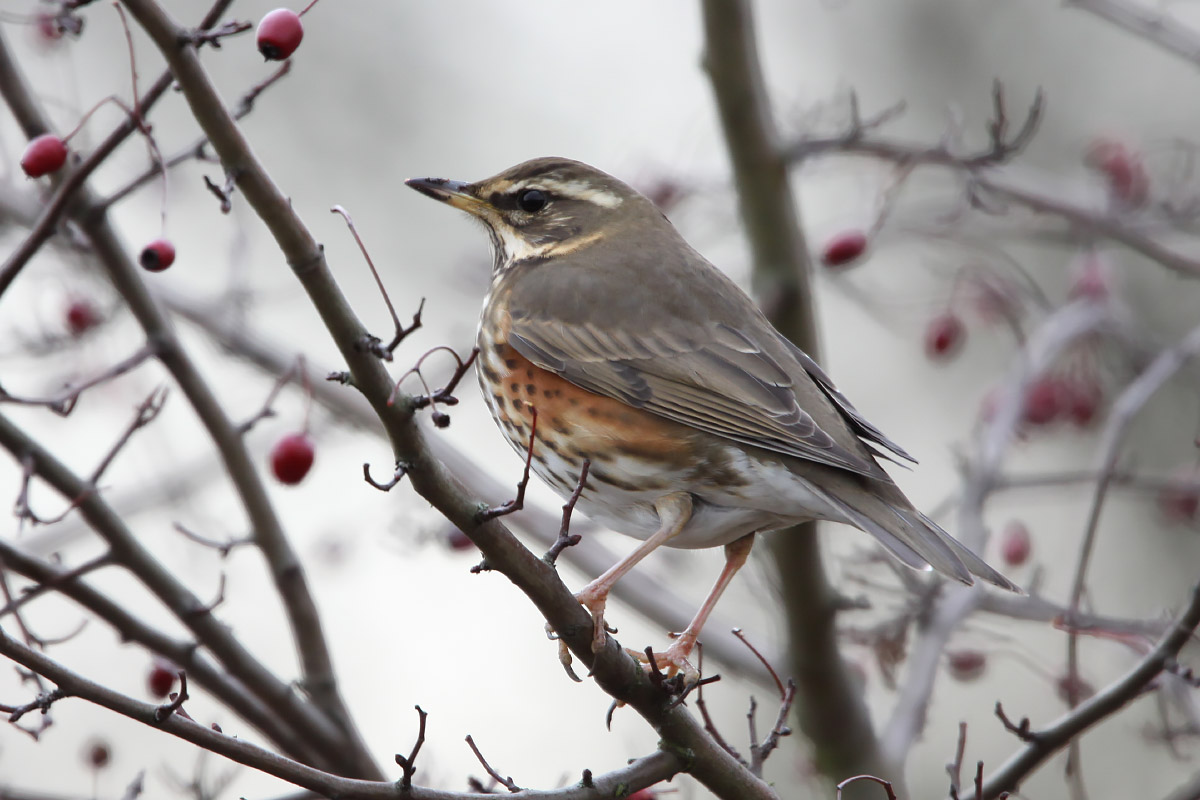 Redwing (Rainham Marshes, Greater London, 17 December 2010). This Redwing looks a rather pale greyish-brown above, while its underparts are very clear white with the visible streaking on the flanks appearing relatively sparse. These features are strong indicators that this bird is of the nominate Scandinavian and Russian subspecies, the default form across most of Britain. Note also the very pale 'bubblegum pink' legs and feet – another feature of some nominate iliacus (Dominic Mitchell). 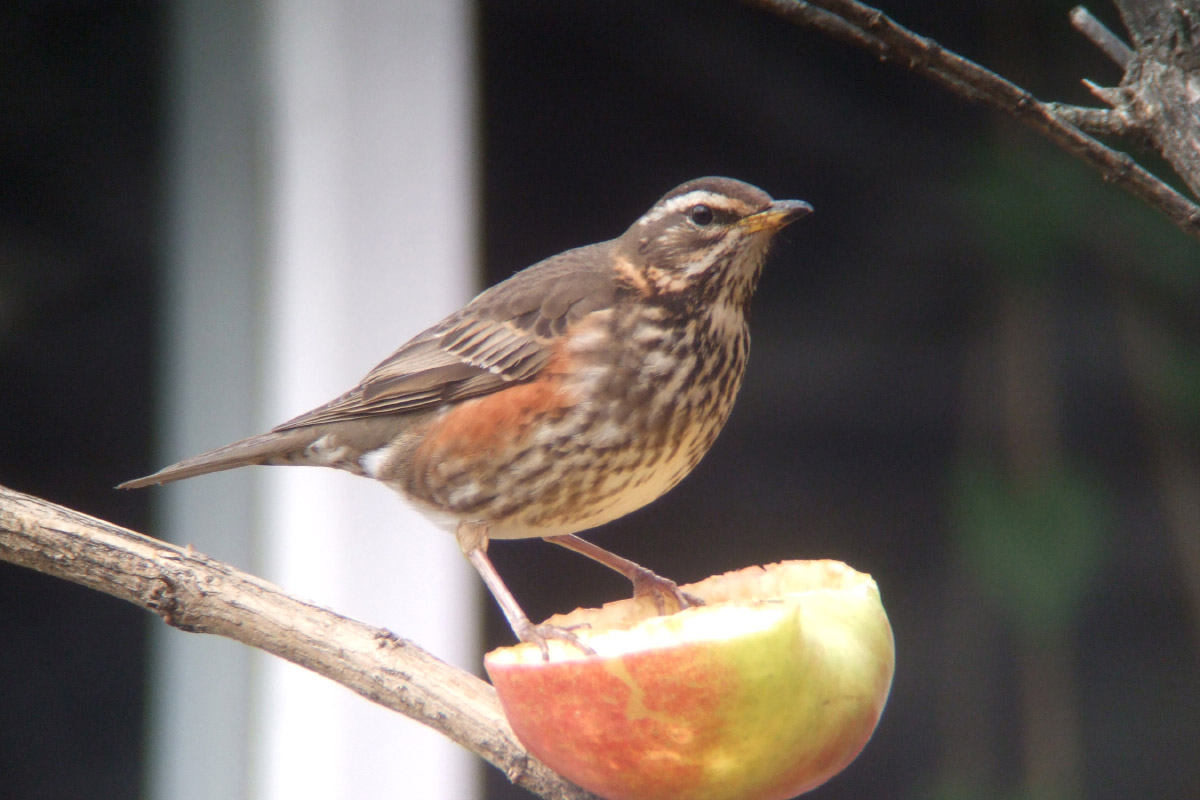 Redwing (Selfoss, Iceland, 17 April 2011). This bird looks very like a nominate form Redwing, but its underparts are quite thickly streaked, giving a rather dark appearance to the whole of the underside, suggesting that it might be of the Icelandic subspecies. This is a somewhat subtle individual, however – some Icelandic birds are rather more striking than this – and it might not attract attention in Britain. We can be sure of its identity, though, as it was photographed in its home Icelandic range (Andy Stoddart). 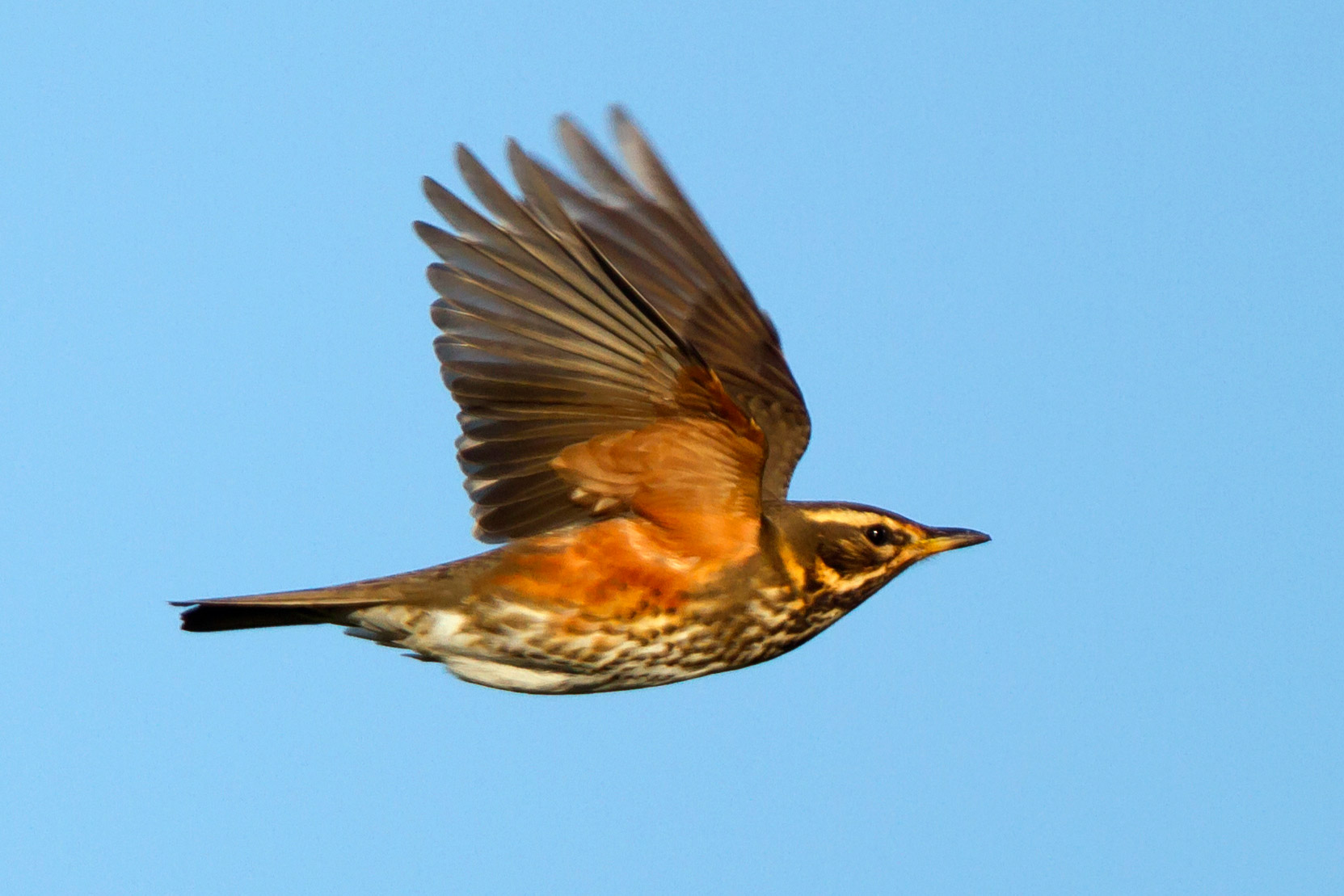 Redwing (Heligoland, Germany, 15 October 2011). Identifying Redwings to subspecies on a flight view is probably a step too far, but some details can nevertheless be captured in photographs. This bird is moderately streaked below and could either be a well-marked nominate bird or a weakly marked Icelandic bird. However, the location of this individual (Germany) provides compelling circumstantial evidence that it is likely to be the former (Ralph Martin / www.agami.nl). 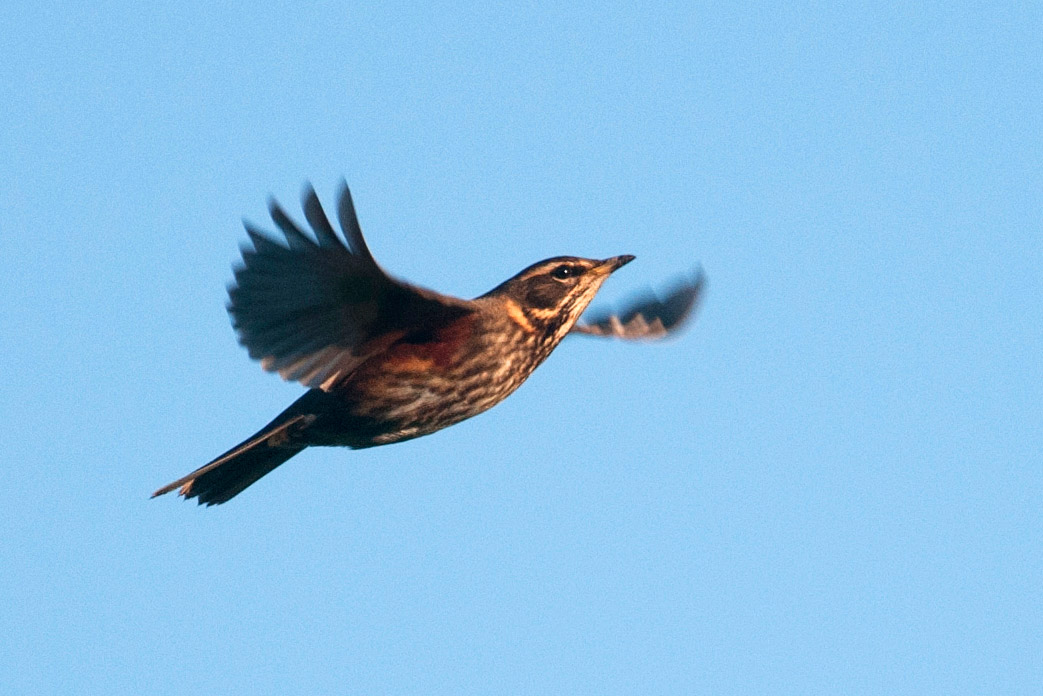 Redwing (Findhorn Valley, Highland, 8 November 2014). The very heavily marked underparts of this bird, with strong blurry streaking on a dull background, strongly suggest that this is an Icelandic Redwing. Note also the strong warm buff hues in the supercilium and a quite dark red flank patch (Marianne Taylor). 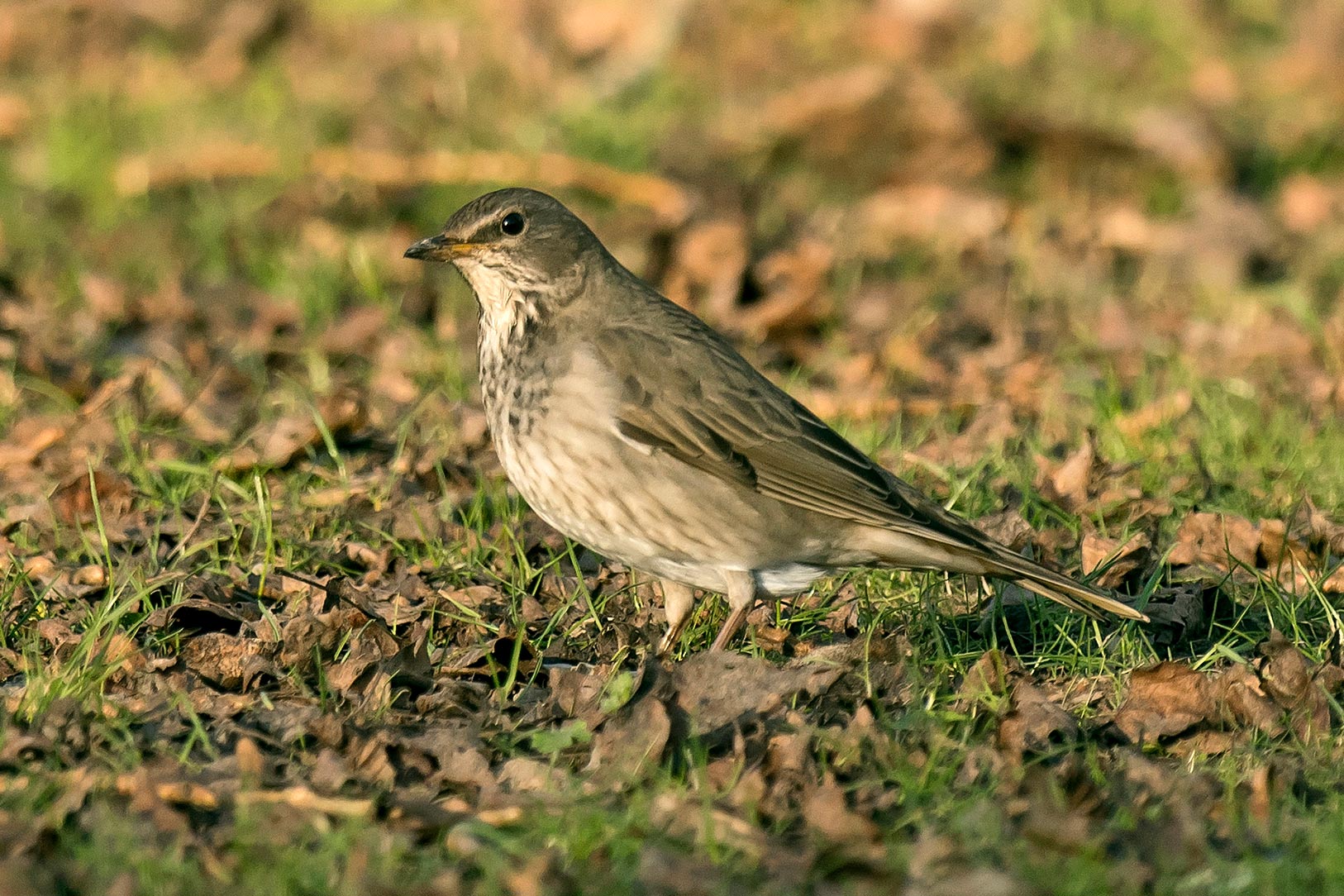 Female Black-throated Thrush (St Asaph, Clwyd, 29 December 2016). This rather featureless thrush shows dull grey upperparts, a weakly marked face pattern, diffusely streaked flanks and a gorget of dark marks across the upper breast. It doesn't strongly resemble a Redwing, nor is it any of the common British thrushes. It is instead the dramatically rarer Black-throated Thrush (Steve Young / www.birdsonfilm.com). 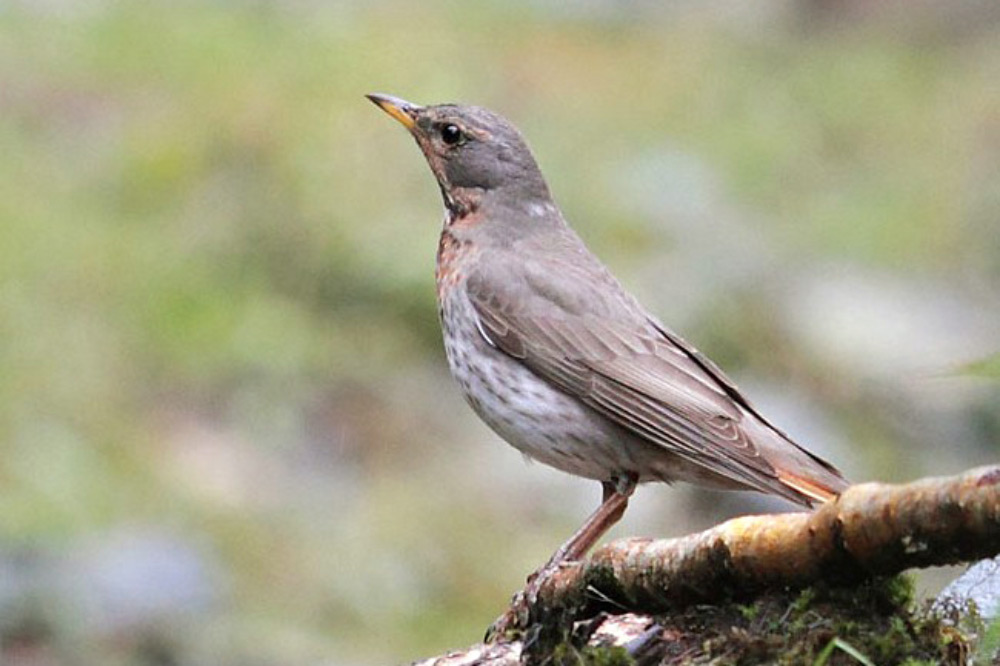 Female Red-throated Thrush (Arunachal Pradesh, India, 11 April 2016). This thrush is similar to the Black-throated Thrush in the preceding image, but shows orange-red hues in the supercilium, throat and breast. There is also some orange visible in the tail sides. This combination of features identifies it as a Red-throated Thrush, a close relative of Black-throated, with which it hybridises to a limited extent, although the two are generally treated as specifically distinct. With only one British record, this is about as rare a bird as you can get! (Gobind Sagar Bhardwaj). 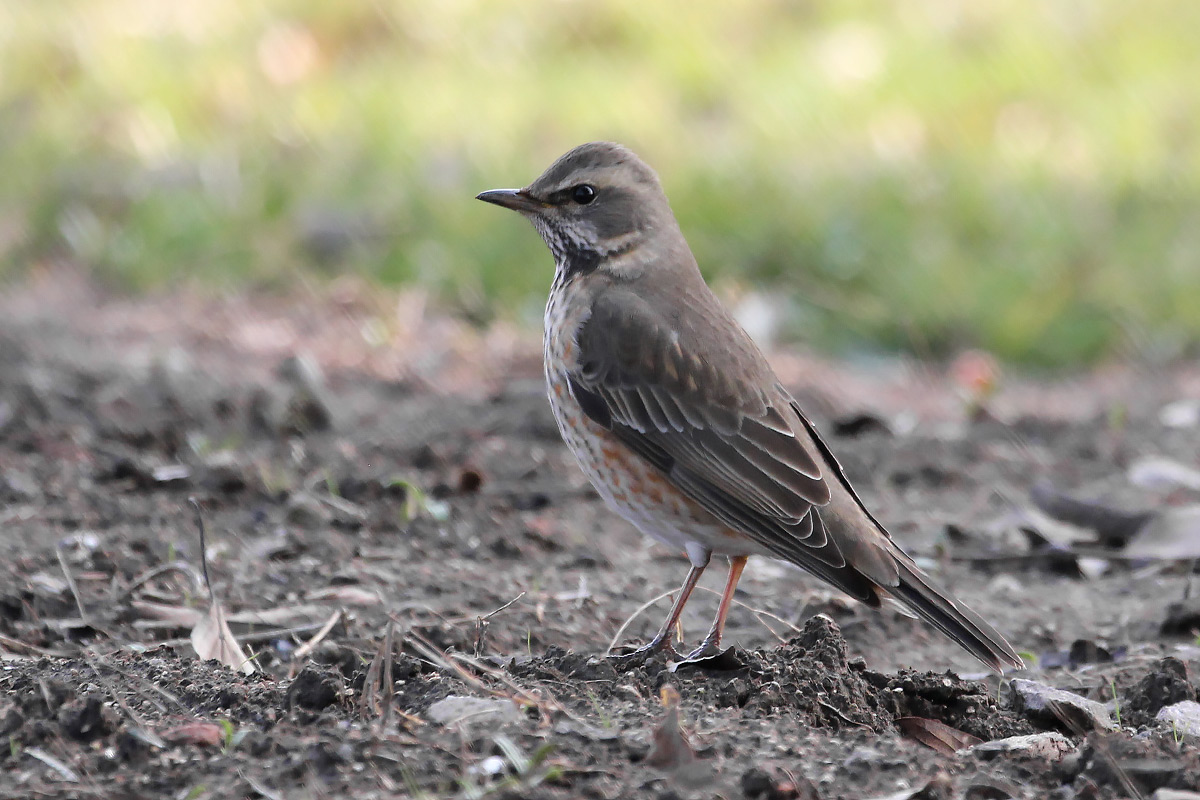 Female Naumann's Thrush (Shanghai, China, 25 December 2012). Almost as rare in Britain is Naumann's Thrush. This species resembles Redwing much more closely and could easily be passed off as such on a brief or distant view. Note, however, the rather weaker supercilium and much more weakly marked underparts which lack the strong longitudinal streaking of its commoner relative. This is a particularly unstriking individual which might easily be passed over as a Redwing (Devaram Thirunavukkarasu). 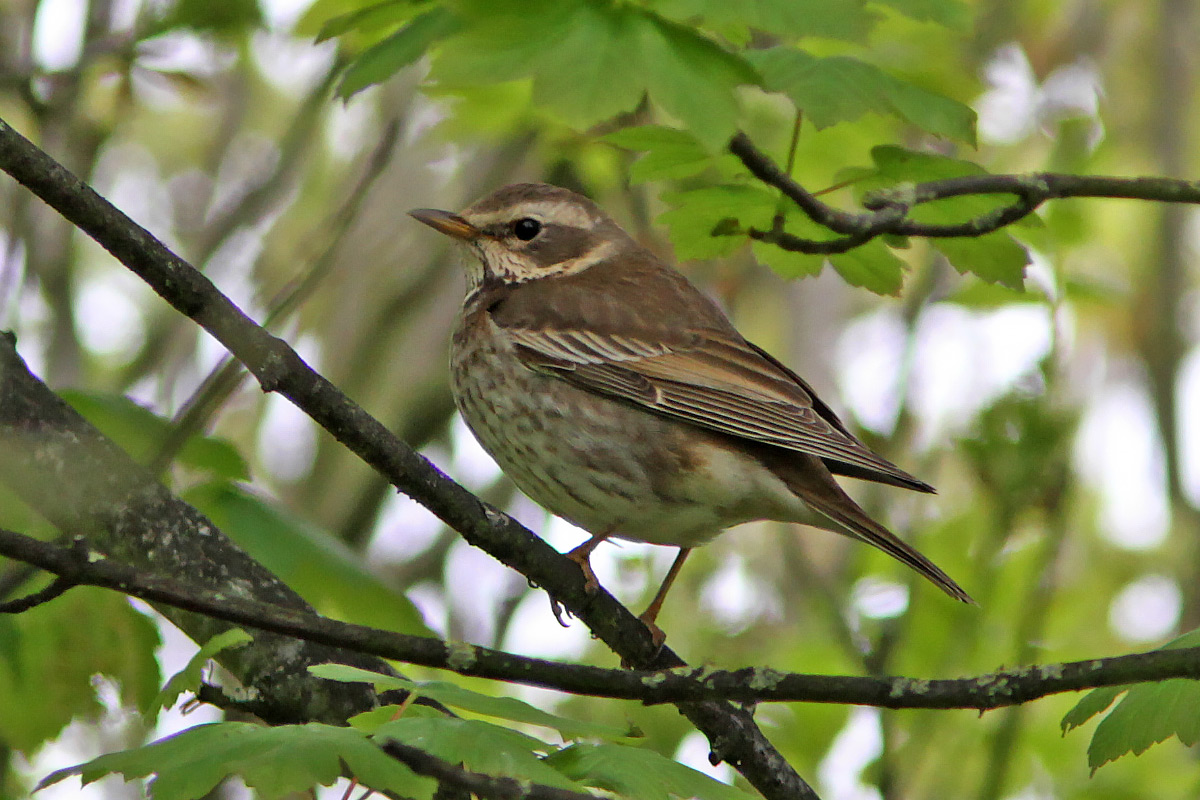 Female Dusky Thrush (Margate Cemetery, Kent, 18 May 2013). Dusky Thrush – another very rare vagrant to Britain – also resembles Redwing in size and structure, while its strong supercilium is also highly reminiscent of that species. The rest of its plumage is generally rather distinct, however, with variable but (as here) often prominent chestnut hues in the upperparts and blackish markings, often in the shape of chevrons, across the breast and down the flanks, the ground colour of which is white (Dominic Mitchell).