Red Kite breeds in Cornwall for first time in 170 years

In recent years, Red Kite has become an increasingly familiar sight in Cornwall during the summer months. Settled mid-summer high-pressure systems bring large numbers of birds into the county, with more than 200 occasionally seen at bottleneck sites in Penwith and the Lizard peninsula. These birds filter south and west, sometimes gathering in large roosts before moving on. It's presumed that these birds are roaming non-breeding birds from 'up-country', but the occasional presence of Black Kites mixed in with these flocks may suggest some have a continental origin. It is also possible that these birds get caught up with the larger movement of birds, having arrived in the UK further east. 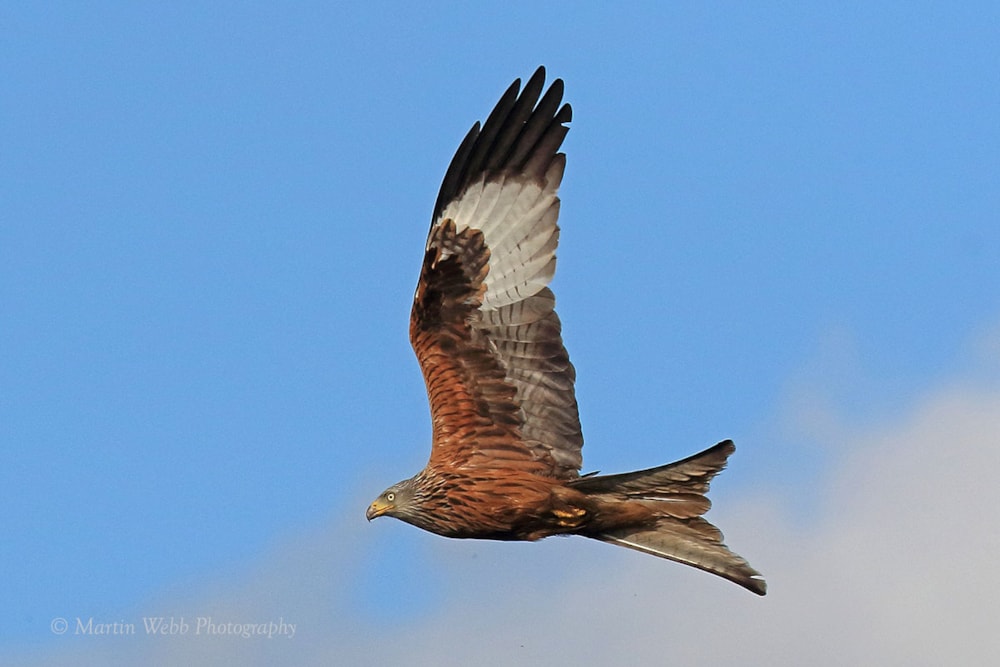 Red Kite sightings have been a familiar part of summer birding in Cornwall in recent years, but a confirmed breeding record had proven elusive (Martin Webb).

Sightings of wing-tagged birds over the years have provided some clue, and the only evidence, as to where these birds originate. The BTO's Online Ringing Report (current to 2019) lists six records of ringed birds in Cornwall, with two more recent records known to us. There is one 'old' record of a bird ringed as a chick in Highland Region in July 1991 and subsequently reported from Angus, Perth & Kinross and Co Down before being found long dead near Truro in December 1991. In more recent times, there have been reports of wing-tagged birds as follows: 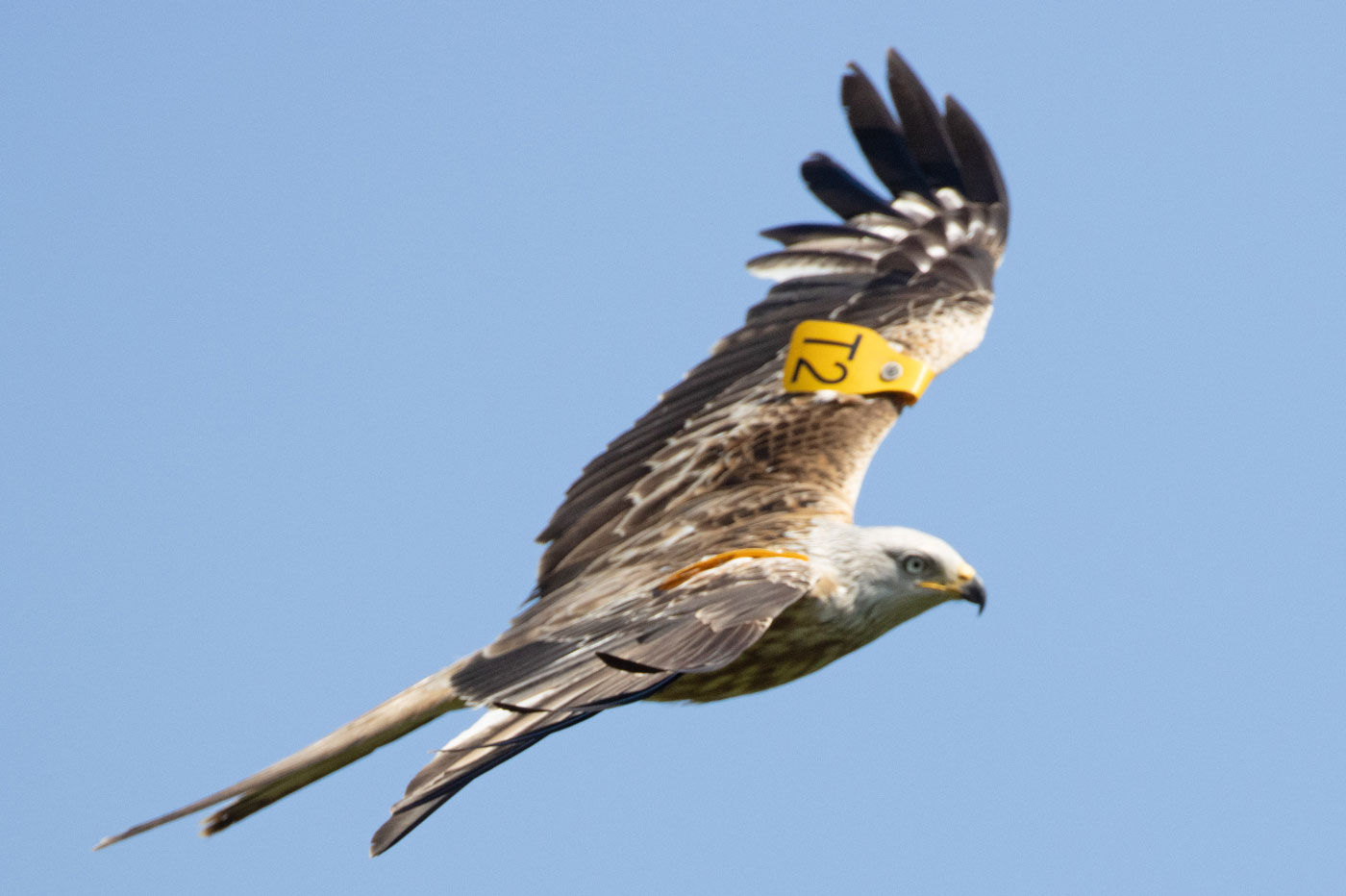 One of several wing-tagged Red Kites noted in Cornwall, this bird was ringed at the nest in Shropshire in July 2013, before being observed at Towednack the following summer (Linton Proctor).

The glut of summer sightings in recent years now makes it rather difficult to identify any birds lingering in likely breeding habitat. While breeding has long been suspected, proof of this has eluded nest recorders across the county. Historically the picture is also rather clouded, as this extract from Penhallurick's avifauna (1978) nicely summarises:

According to D'Urban and Mathew (1892), Rodd could remember when the kites bred annually "in some large woods in Cornwall", but his own books and MSS make no mention of this, only that he had some recollection from his schooldays at Buckfastleigh of kites breeding at Holn Chase on Dartmoor – a claim refuted by D'Urban and Mathew. Bulmore (1866) wrote of a pair (no date) taken from a nest in Tolvern Woods, Philleigh – "both reared, one escaped, the other died shortly afterwards" – which Clark (1906) interpreted as nesting at Tolvern until 1835. Clark also claimed nesting above St Neot until at least 1842, and in the Lizard peninsula in the early 19th century, but there is no evidence to support any of these claims. On the contrary, contemporary reports note the rarity of the kite.

"Nesting has occurred in the west of England (Devon, 1913), including Cornwall in 1920." No details were published at the time and no correspondence with Witherby and Co survives, for which reason the record is viewed with scepticism. Rumour places the nest-site in the Glyn valley near Bodmin.

So, it is still unclear what the historical status of Red Kite is in the county, but it is perhaps likely that it bred in the 19th century. Since this time though, the trail has run cold.

In mid-May 2021, I was shown a video by a tree surgeon friend that appeared to show a territorial Red Kite driving off corvids from what the landowner thought was an occupied nest site. Having visited the site (in mid-Cornwall) soon afterwards, there was certainly a pair of kites present, but not appearing to show any signs of breeding behaviour.

Several further visits over the next few weeks saw occasional sightings of lone birds, but again very little behaviour to suggest breeding. However, during incubation birds can become quite elusive, so this didn't necessarily disprove anything. By late June (and with a Schedule 1 licence now in place), the site had gone very quiet and the landowner assumed the birds had left. However, on 26 June I saw an adult actively feeding in the local area, so decided to check the site once again. The next day I saw two active adults in the area with one, possibly two, other very vocal birds. When one of these was tracked down it was obvious that it was a recently fledged juvenile, with its outer tail feathers still not fully grown. At least one, and probably two, juveniles were then seen occasionally in flight, with both adults (now in active wing moult) in attendance. By the start of July, the birds appeared to have left the site, with no further records. 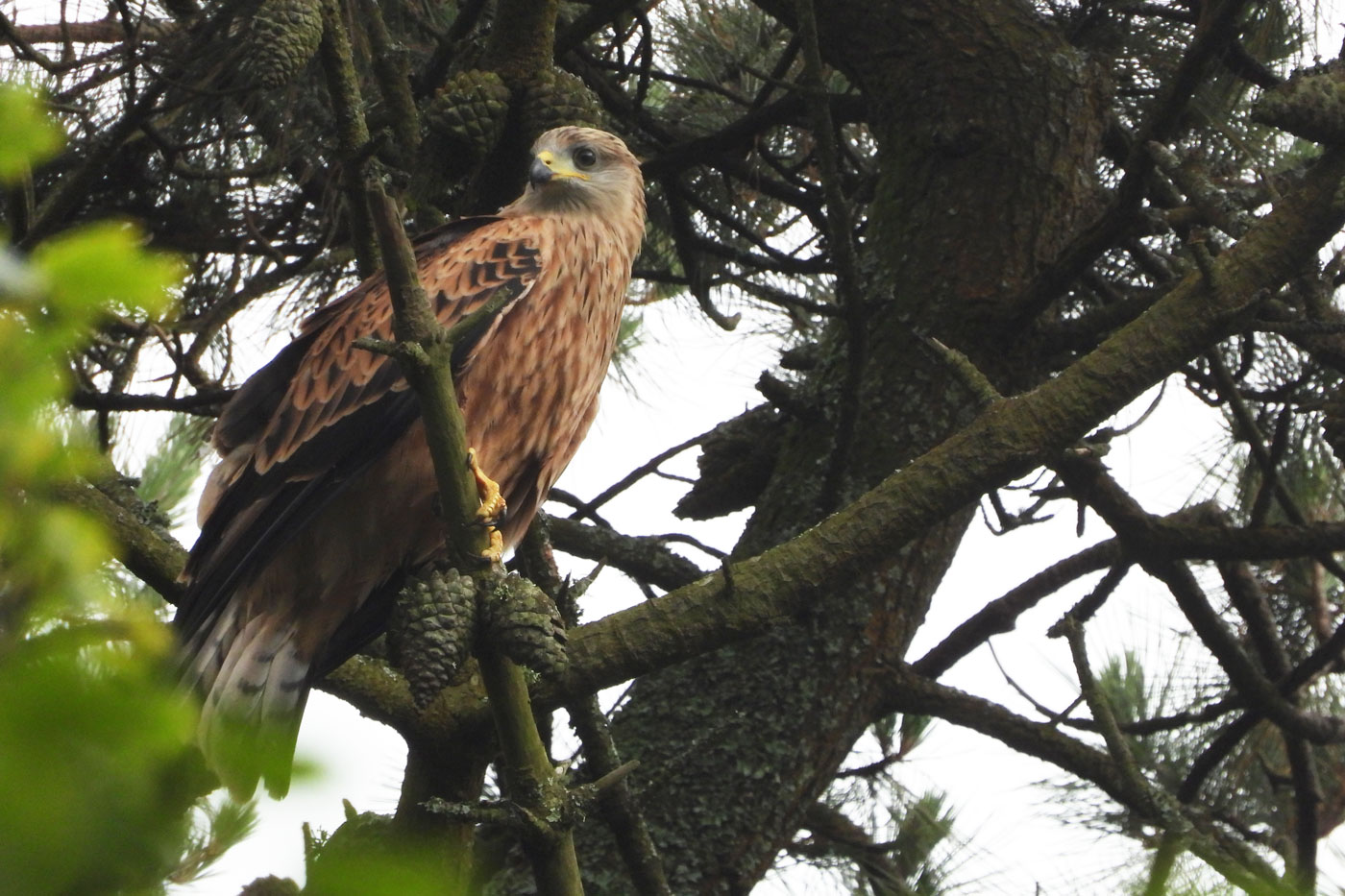 One of two juvenile Red Kites confirmed to have fledged in Cornwall this summer, marking the first definitive breeding occurrence since the 19th century (Mark Grantham).

Regionally, Red Kite has unsurprisingly been increasing in number, with breeding now recorded across most of the region, summarised below:

In the Devon Bird Atlas (2007-13), birds were recorded in 93% of 10 km squares, but still has yet to be proved to breed. There have been a few 'possible' breeding records, but only within the caveat of 'in suitable breeding habitat'. However, there is also a record of unsuccessful breeding near Plymouth in the late 1990s, but this does not seem to be published by Devon Birds nor submitted to the Rare Breeding Birds Panel.

Breeding was suspected from around 2010, with pairs displaying and even nest-building recorded, but not confirmed until 2019. There are still very few breeding pairs, but certainly low to medium single figures.

There have been a couple of unsuccessful breeding attempts in 2004 and 2010, with eggs laid but nothing further and thoughts are that these were immature birds. However, in the last couple of years it is strongly suspected that several pairs have bred in the far east of the county near the Wiltshire border, although not actually proved so far. Red Kites are present all year in this eastern part of the county, so it would suggest they are breeding. It is also the area of Somerset with the few observers.

The county benefited from the large-scale reintroduction scheme in the Chilterns (Oxon/Bucks/Beds) which ran from 1989 until 1994. Unsurprisingly, records soon started to come from the eastern edges of the county and the birds slowly found the Cotswolds to their liking. A pair summered in 2003 and in the following two years a pair displayed in the same area but breeding wasn't confirmed. RBBP has records of confirmed breeding in 2006 and 2011, in both cases based on records of fledged juveniles with the nest site unknown. Breeding was then confirmed in 2013. Currently, the vast majority of breeding birds remain in the Cotswolds, with confirmed breeding in 27 tetrads (with nests located in most cases) and possible breeding in 15 further tetrads, although the actual figure is suspected to be much higher than this (60-100 pairs). 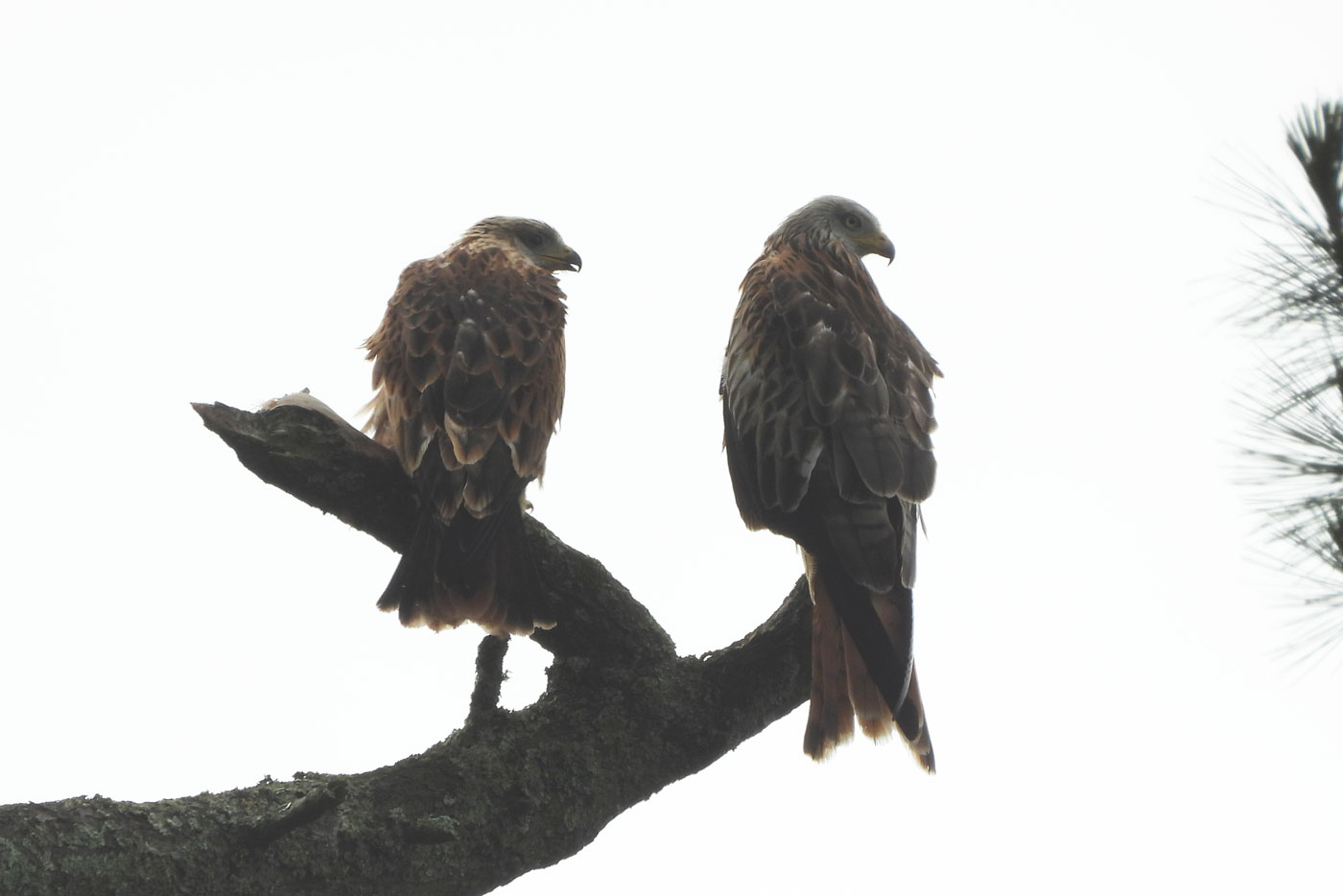 The recent increase in other breeding raptors in Cornwall (particularly Eurasian Hobby and Northern Goshawk) set the stage nicely for a long-anticipated pair of Red Kite, but it was sheer luck that this pair was picked up and reported. We hope that with this species now firmly back on the radar of birders in the county that we might see further confirmed breeding records in the future.

Many thanks to the two Cornish landowners who allowed free access across their land to monitor these birds. Also to the county recorders and raptor groups from across the region and Mark Eaton at RBBP who provided a useful summary of breeding records.