Red-rumped Swallows are beautiful and distinctive birds, with their rusty-red rump and nape. In world terms they have a widespread distribution. The western race ranges from northwest Africa and Iberia eastwards to the Middle East; other populations breed in eastern Asia, across the Indian subcontinent and locally in equatorial Africa. The wintering grounds of European birds are not fully known, but are presumed to be in the savannah zone of the northern Afrotropics; there is a strong spring (and autumn) passage through the Straits of Gibraltar involving birds from the western part of their range. The nominate form from eastern Asia has also occurred as a vagrant to the Western Palearctic.

A northward expansion of the breeding range in Europe was reported in the 1970s and there has been a more recent range increase in France and Portugal. This expansion has correlated with more British and Irish records over the past 25 years or so. There were only seven records prior to 1958 and just 95 by 1986. An exceptional 64 were noted during an influx in October and November 1987, but the best spring tally was 19 birds in 1990. One of the more frequent rarities on the British and Irish list, this species is better considered a scarce migrant nowadays rather than a true rarity, with over 350 records by the end of 2001.

Traditionally it is one of the earliest rarities to occur, with the earliest ever at St. Mary's (Scilly) from 15th-16th February 1998 (with three other February records the same year). There has been one other February record and six others have been in March, but the majority of sightings have been between April (over 15%) and May (nearly 40%). As would be expected of a spring overshoot there is a strong bias towards records along the south coast, as well as the east coast, though birds tend to move on quickly. Where birds linger they always attract a substantial amount of attention from birders. Of interest was one in a House Martin colony in Dorset from July-September 1988 which sang frequently and helped to feed the young at the nest.

During April and early May 2003 a record spring influx of Red-rumped Swallows was noted, the majority of birds associated with strong southerly airflow coming up through Iberia and into Britain, leading to classic overshoot conditions for migrants moving into Iberia at the time. This lead to a major arrival of birds from the 24th (see weather maps for 23rd April, 24th April and 25th April) onwards, with at least 31 birds over this period (plus four earlier birds this spring) bringing the spring total thus far to at least 35 birds, easily eclipsing the tally of 1990.

As with national records, there was a southerly bias to the arrival, with birds only reaching as far 'north' as Cleveland and Cheshire. At Gibraltar Point an excellent total of four birds was finally accumulated late evening on the 29th April, with the birds still present the following morning. The influx did not last long, with the three on the 4th May the last, except for one in Kent after the 'event'. As is usual with spring overshoots it is likely that these birds soon found their bearings and successfully re-orientated themselves.

Birds were noted from the following sites (note that these sightings will have to be assessed at a national level): 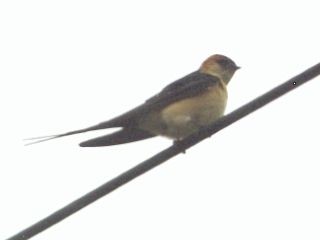