Every birder on a pelagic trip dreams of seeing a rare, 'lost' bird, often thousands of miles from its normal range. When we woke up on the morning of Thursday 2 June 2022, none of us expected to see the mega that would visit us at the end of the day …

On that early June morning, at 2.15 pm, Ortelius casted off from Vlissingen in The Netherlands to Spitsbergen where she will spend most of the summer discovering the flora and fauna of this Norwegian archipelago in the High Arctic. On board were 112 birders from Inezia Tours, all eager to get out into the open sea and witness species up close that we were more used to seeing from afar.

Before arriving in Longyearbyen, Spitsbergen, we called at Fair Isle and Jan Mayen. With an area of only 7.7 km2, Fair Isle is famous for its observations of Siberian birds and remains a hot-spot for bird migration with no less than 388 species recorded to date. Two days of sailing separated us from this little birding paradise halfway between the Orkney Islands and the Shetland Islands. The conditions at sea were particularly mild and favourable for observing the marine wildlife and taking photos – which is far from always the case. 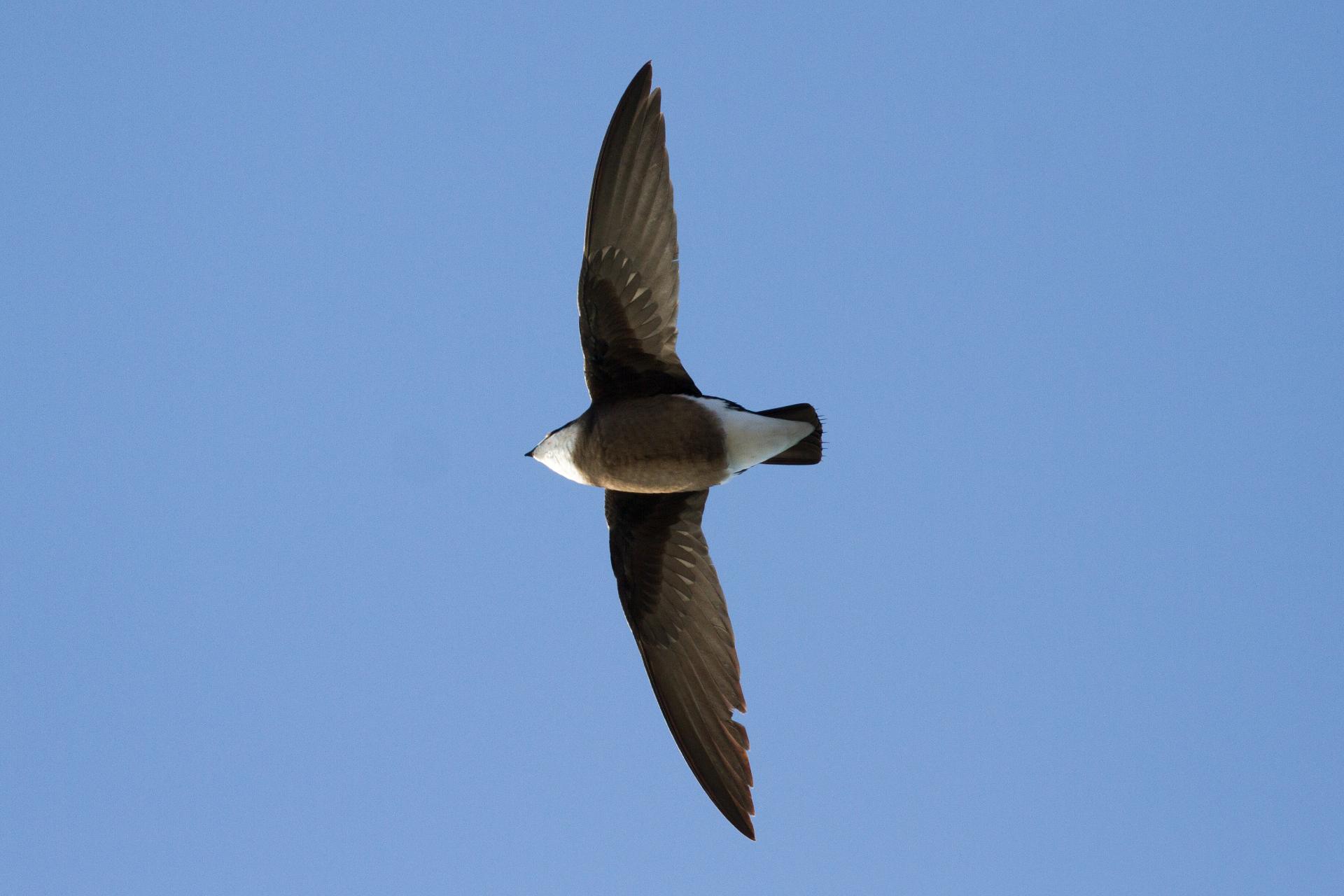 The needletail will prove to be a 10th record for Britain, and the 25th for the Western Palearctic (Christophe Gouraud).

After a first night, the day of 3 June passed quietly and everyone was getting familiar with their new home. The first Northern Fulmars, Northern Gannets, Kittiwakes and Guillemots soon appeared and circled around the Ortelius. In the afternoon a Northern Wheatear and a Acrocephalus species took an interest in the ship for a few minutes. Even though these birds are quite common on land, seeing them in the open sea, a few hundred kilometres from any coast, is a special moment. Some continue on their way while others will gladly land for a few hours of well-deserved rest.

The day of 4 June was likely to be similar to the previous one. As we got closer to the Scottish coast, we observed our first Puffins and, shortly before lunch, two Swallows landed on the back deck. The temperature was very pleasant and a simple breeze was felt. The day progressed slowly and we alternated observations on the outside decks with lectures given by the seven naturalist guides on board.

Just when we thought the day was over, a few minutes before dinner is announced, several birders from Inezia Tours still present at the back of the bridge spotted a strange bird approaching the ship. Still quite far away, one immediately thought of a swift or a martin. As the first details of the bird appeared, a young and enthusiastic birder called out "Needletail!". A shiver ran through our bodies.

One hesitated between grabbing one's binoculars or one's camera; nobody knew whether the bird would just pass by or whether it will linger for a few minutes. The conditions for observation were optimal. The boat hardly rocks and the light of this end of day was perfect. The bird made several passes over the ship and sometimes even only a few metres above our heads. With its stocky body, white throat and underbelly, brownish back and small needles protruding from the tail, there was no doubt that it was a White-throated Needletail – a truly mega bird in the Western Palearctic where the species has only been seen a handful of times.

The excitement was clearly perceptible and hundreds of photos were taken. Clearly interested in our presence, the bird's aerial manoeuvres became more and more impressive until the unthinkable happened: the bird rushed behind five passengers and tried to cling to the metal wall at the back of the bridge. Unfortunately the section was too smooth and the bird could not hold on. Losing its grip just one metre above our heads, the needletail found itself on the ground with its wings spread, helpless and unable to take off again. We were all frozen for a few seconds.

As I put my binoculars and camera on the ground I invited the passengers, totally stunned (as was I), to take a few steps back. I took off my fleece, crouched down and slowly approached the bird, hiding behind the garment I would use to cover the unfortunate bird. As I picked it up and folded its wings, the poor animal showed its displeasure with a few cries. I placed the very short – but sturdy – legs between my fingers and moved into the sunlight before uncovering the bird to see if it had any injuries.

Reassured about the bird's condition, I raised my arm so that everyone on deck could appreciate the beauty of this species. The bird let its wings hang down on each side of my hand, revealing very nice metallic reflections on its shoulders. As the bird was not injured and I did not want to stress it any more than necessary, I decided to release it after a few minutes by placing it on my hand, the arm stretched out over the railing. Feeling the freedom the needletail spread its wings and immediately dove into the void. 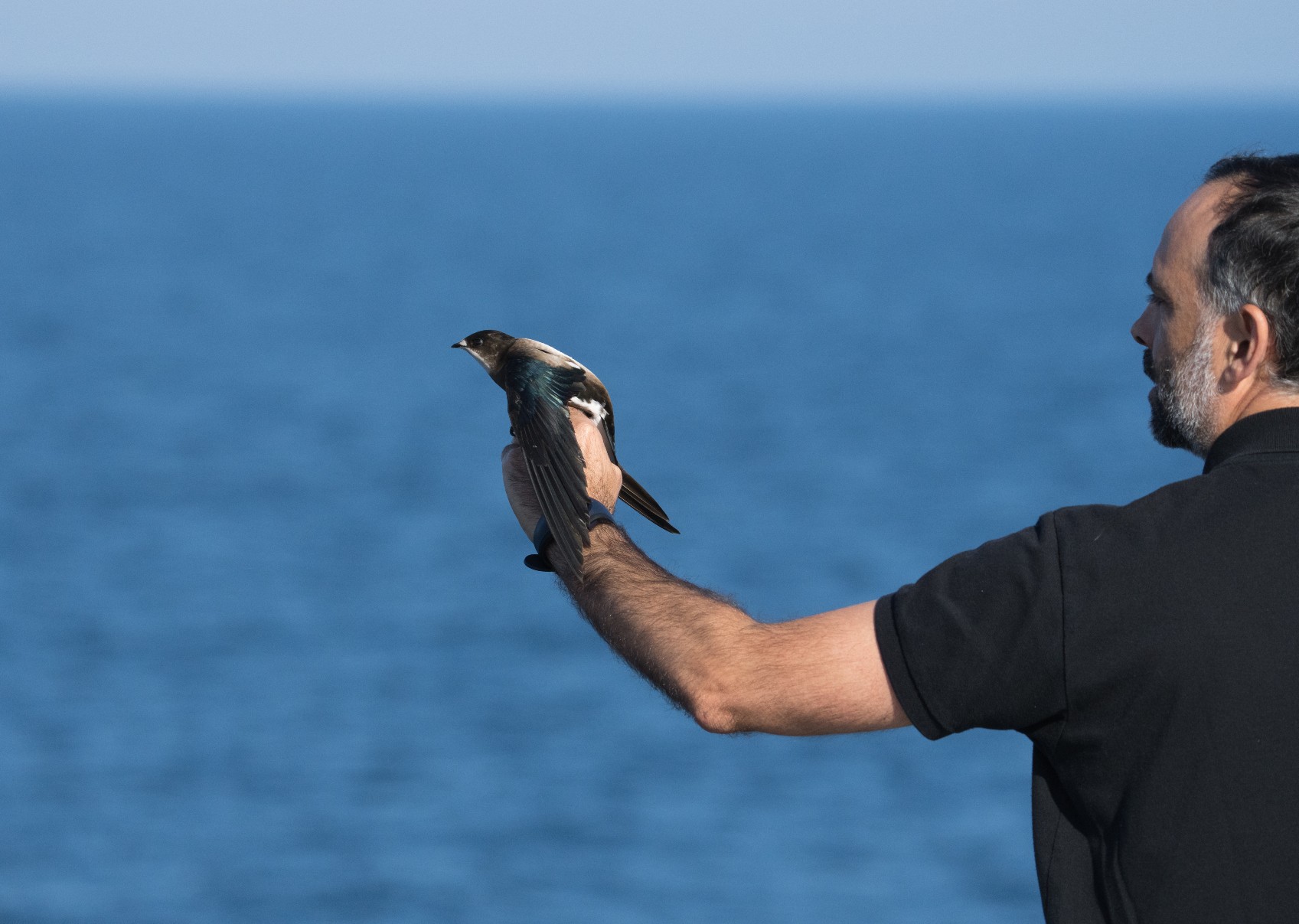 The White-throated Needletail moments before its release by Christophe (Fred Olk).

Everyone held their breath and prayed for the bird to regain altitude. Touching the water would certainly be fatal. Fortunately, after a few flaps and caught in the wind, the needletail soared in the air reminding us that he is master in this element. One would have thought that the experience of a few minutes earlier would have caused this Asiatic visitor to distance himself from us, but it was not to be!

The bird immediately returned to hover over our heads before circling the ship and flying over us again, much to the delight of the photographers. It was with this experience that we ventured in excitement and awe to the Ortelius restaurant. During the meal, everyone obviously discussed this extraordinary observation. We all wondered why and how this bird arrived here in the North Sea, only 65 nautical miles (about 120 km) east of Duncansby Head in the north of Scotland, more than 5,000 km from southern Russia and Mongolia, its closest range.

While the Himalayan populations appear to be sedentary, the populations from Russia, Mongolia, China, Korea and Japan winter to the eastern part of Papua New Guinea and Australia. Has the bird been diverted from its migration route? Did it suffer a malfunction in its navigation systems? No one will ever know. We can only hope that it will have found the continent quickly so that it can feed properly and return to the east where it will perhaps meet up with others of its kind.