At 07:00 I picked up a distant stint among several hundred Dunlin. It just looked like a partial summer-plumaged bird but upon closer inspection something was wrong — the bill was somewhat longer than expected and I could not match the upper body and closed wing to any Little Stint that I could remember.

I got a little closer and thought palmations were present between the long toes but was uncertain. Reviewing the head-on images I had just taken, I could see what appeared to be at least one decent palmation and although the bird was still distant, size and structure were leaning towards Semipalmated Sandpiper.

At 08:30 the sun shone for a few seconds and produced beautiful warm-rustic scapulars, with a row on each side of the outer mantle. I knew this was going to be better than Semipalmated as I noted pencil-line flank streaking — it was short and fine but extensive (unlike in Semipalmated). With Western Sandpiper now firmly in my mind I rang Killian Mullarney to discuss some of the finer ID points, and he said he would be on site within 15 minutes.

I stood back from the bird until he arrived, but when he did we edged closer for better views, taking images continuously. KM was particularly cautious, scrutinising the scapular bases as they should be warm and rusty. It took some time but eventually it ruffled its body feathers and boom! KM noticed one base to a rear scapular which was fully rusty. Semipalmated never shows warm rustiness to the base of these feathers but can do so to the outer edge, although this is uncommon. KM shook my hand and congratulated me on finding a Western Sandpiper.

The subject left the main flock and settled with a few Dunlin at the area known as the sluice, and afforded cracking looks and the chance to take a few more images. The bill was long but on the short end of Western, indicating male (Semipalmated can be as long-billed as Western). The head was rather like Little Stint but in the sunlight the crown was russet red, more similar to Pectoral Sandpiper but not nearly as bright as in full breeding-plumaged Western. The coarseness of crown streaking was restricted to the centre crown, not unlike Little Stint, but less capped like in Semipalmated.

As already mentioned, the scapulars were a real giveaway and at least one lower feather had the apt tones to the base. Also of note was the black-looking shaft streak, better for Western than Semipalmated, with arrowheads to the edge of the smaller feathers. The flanks were well marked with tiny, short and fine streaks — Semipalmated can show this but never so extensively. The toes had a half-web on the outer side of the foot with the smallest hint of a web to the inner side (this would be webbed on both inner toes on Semipalmated). The bird behaved all day and about 40 birders were able to enjoy it. 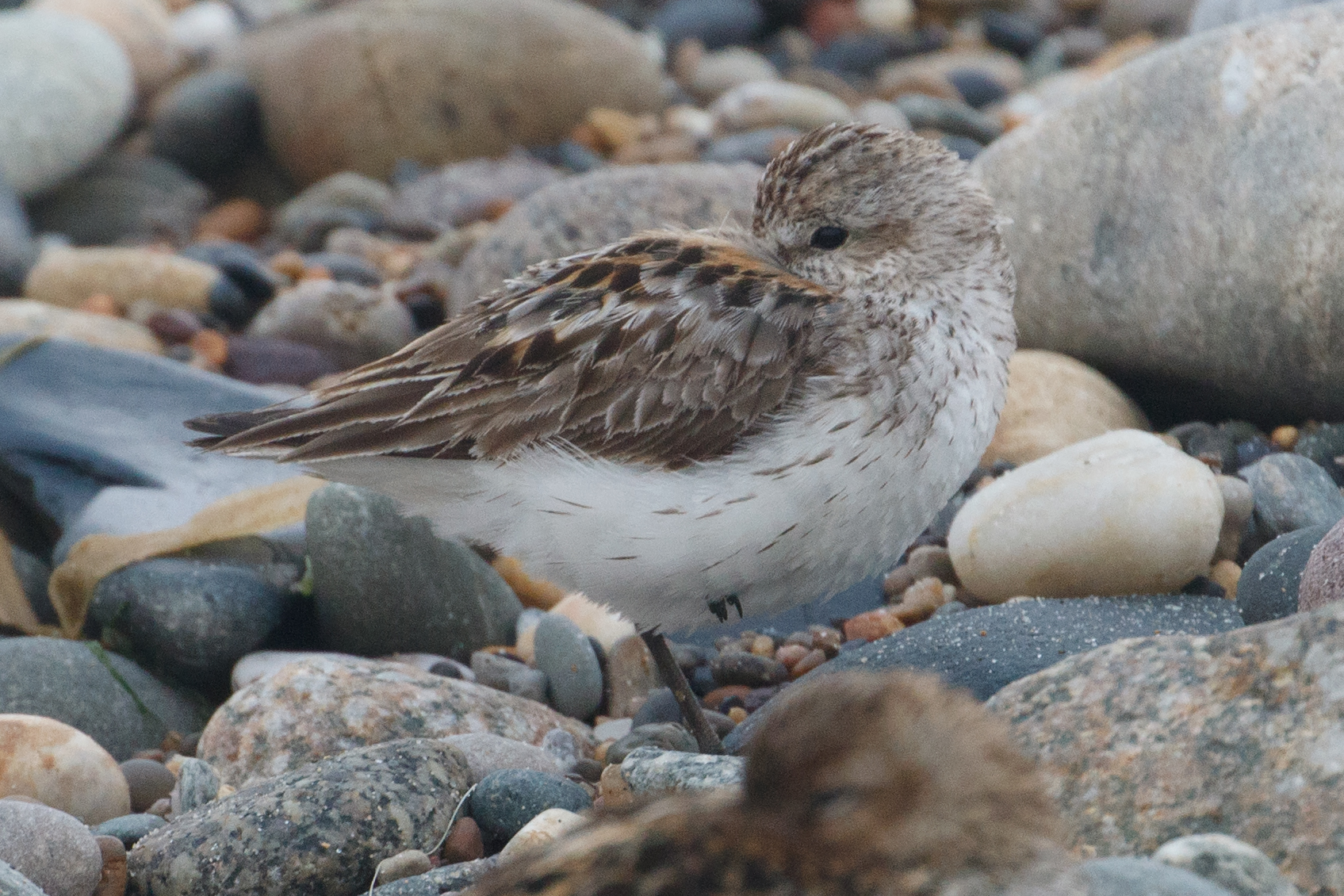 I must add a huge thanks to Killian Mullarney for his time and help in clinching Ireland's fifth Western Sandpiper.