6:45 am Friday November 16th: Rosemary made her usual early-morning visit in the dark to see what moths had been attracted to the outside light. Turning the corner of the house she was startled to find herself confronted with a huddle of darkly clad men. All she could think of to say was "Oh, you're here," and swiftly retreated indoors to report: "It's really happening. It's started."

Actually it had all started six days earlier as we ate Sunday breakfast in our kitchen. Two Blackcaps in the apple trees were joined by another grey bird. Rosemary said: "Isn't that a Lesser Whitethroat?" After a quick look with the binoculars that hang alongside the kitchen table, I agreed, noting that the white eyering seemed particularly noticeable, but thinking nothing further of it.

Rosemary and I have been birdwatchers for 40 years or so. We have participated in many BTO surveys and have birded extensively around the world, but are definitely not rarity-spotters. Rosemary commented that it seemed rather late for a Lesser Whitethroat and so we put a brief post on the Pembrokeshire Bird Blog. Mike Young-Powell, who is definitely a rarity spotter and "hot birder", asked if we could take a picture of the bird to see whether it might be the eastern race. The bird stayed, but it was not until Thursday morning that I managed to take some reasonable pictures. I quickly put them on the blog, and went out for the afternoon and early evening, returning mid-evening. 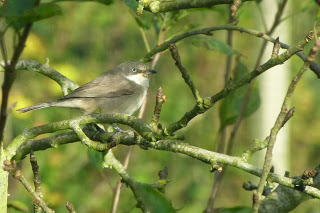 The picture that started it all off (Photo: Peter Royle)

As soon as he saw the pictures, around 6:00 pm, Mike began to think the iris colour and size of bill suggested an Orphean Warbler. Despite his experience he was nervous of calling it, even after a couple of phone conversations with other birders. He confesses to being exhilarated, but beset by doubts, and his wife returned home from work to find the evening moussaka burning in the oven, forgotten in the excitement. Mike's dilemma was resolved by a phone call from Rich Brown, the Skokholm warden, with the same thoughts as Mike. That was the clincher and so Mike, having sent us an email (which we did not see until the following day), put it up on the Pembrokeshire Bird Blog at 7:16 pm, just ahead of Ian Bennell who raised the same question on Birdforum at 7:42 pm.

I returned home and walked into the study as the phone rang. "Hello, this is Steve, from BirdGuides. Do you know you have an Orphean Warbler in your garden? Will you allow access?" You have to agree that's a bit of a show-stopper!

"I'll call you back." A few desperate phone calls later I had arranged with our nearest neighbour, some 400 yards away, to have the use of his camping field for car parking and Mike Young-Powell, Dave Astins, and Steve Sutcliffe had offered help, so I rang BirdGuides back to say OK, we could do it. I initially thought we would have to use the house for viewing, but in the middle of the (rather sleepless) night realised that the bird could be seen from the parking area at the top of our garden.

Which brings us back to Friday morning as the first 30 or so birders took up position. It was a worrying time — would it come to the apples with all these people in the garden? It was a great relief when it appeared at first light, and then rather sporadically during the day, giving reasonably good views to most people. A steady stream of birders arrived, probably 120 or more in total, and this was only Friday. 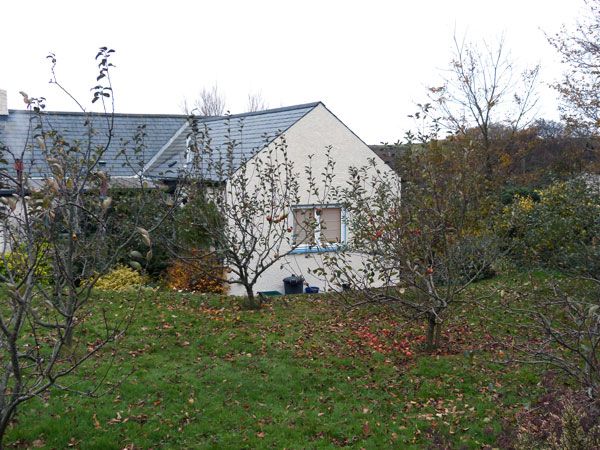 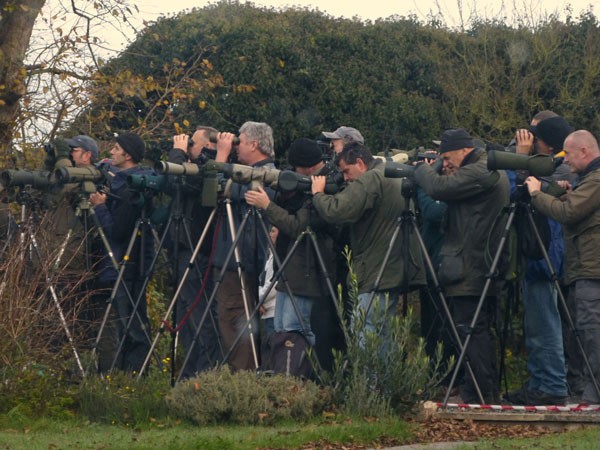 A typical scene from the first weekend of the twitch (Photo: Peter Royle).

The question was asked: Eastern or Western? If it turned out to be Western then those who had seen the Hartlepool bird would not be coming, but if it were Eastern, Pembrokeshire might be overflowing with birders, scopes and long lenses! So Saturday dawned with around 100 people inside or waiting to get into the garden in the first hour. The bird performed well with the observers positioned a little further away from the bird than on Friday. The East v West debate raged through the day; was there a decent picture of the tail and undertail coverts? There was no definite resolution by Saturday evening, despite the 250+ birders who had seen the bird today.

Consensus having moved towards Western, the Sunday crowd was a little smaller. Good news for us though — we have seen Eastern several times but Western was our 4377th lifer, as well as our 90th garden bird. 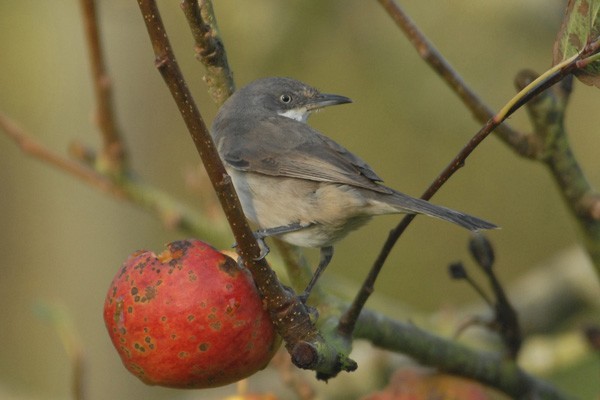 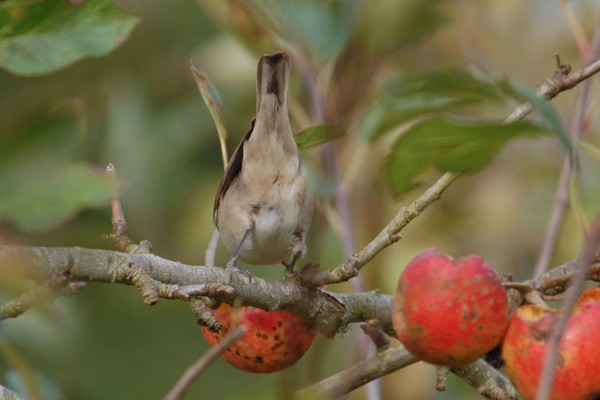 This was the first twitch we had ever 'attended': well, we could hardly avoid it! We had read all the usual horror stories and were prepared for the worst, but we need not have worried. Everyone was patient as they waited to get into the garden, there was a general air of camaraderie, lots of happy people, and a general willingness, once the bird had been seen, to return to the back of the queue in the lane outside in order to let new arrivals see the bird. Mind you, we had to cope with only being able to get in and out of our house, via the conservatory, when the bird was not in view, and not having the house lights on in the early morning, and we felt a tremendous personal responsibility for the bird showing well, silly as it may seem.

Another 150 people arrived the following Sunday and again the bird performed well. (We could not open on Saturday as we were helping to organise the Pembrokeshire Bird Conference on that day, and most of our band of volunteers were going to be there as well.)

On the first morning I had hurriedly put out a bucket and scribbled a notice "Skokholm Island Restoration Fund". Both of us, and many of the volunteer marshals, have worked as volunteers on Skokholm including constructing the Heligoland traps; Rich Brown, the co-caller, is Warden on Skokholm; Yvonne, whose husband's field we used, is a member of the Islands Advisory Committee; while Steve Sutcliffe is the driving force behind the Skokholm project — so it was not a difficult choice. Over the four days the donations to the bucket totalled £1185, leaving Rich with a wide smile on his face as he thought about what they might spend it on.

We, as the owners of the house and garden, would not have coped without the tremendous efforts of Dave Astins, calling upon his experience as organiser of triathlons as well as being an ace birder, supported by Mike Young-Powell (who sort of felt responsible for it all) and Mark Hipkin (all-round good bloke), Kathy Young-Powell, Dave's daughter Emily, Mervyn Jones and Brian Southern. They ensured that everyone had an enjoyable time and a fair crack of the whip, and I would like to thank them all most wholeheartedly. (Dave's book "How to organise a Twitch" — Chapter 1, Find a Bird — will be available shortly!) 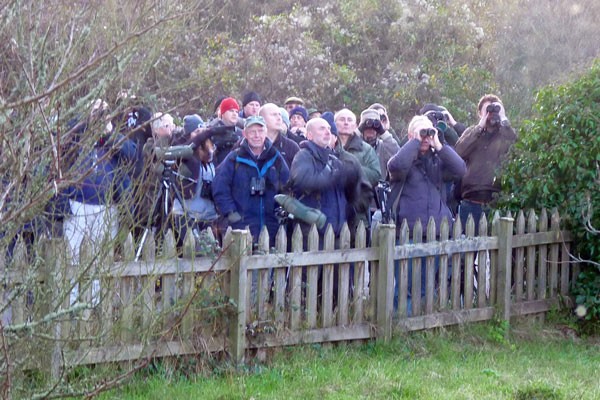 And thanks to all those who visited us, their kind comments in person or via Birdforum etc. and to BirdGuides, who were very supportive in their control of information. Congratulations to "Billy Junior" who drove down from Aberdeen on Saturday night to see the bird. 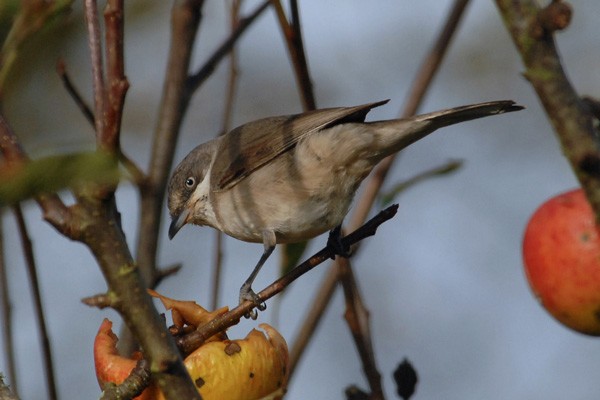 As the light faded on Sunday evening the bird unexpectedly landed on the ground, next to the collection bucket, perhaps just checking whether it had all been worthwhile? Of course it was!