My exams were finished and school was over forever — all that was left to do was some relaxing, birding and ringing at my home on North Ronaldsay. The evening of 29 May was spent at the North Ronaldsay Community Hall with the observatory team playing indoor sports. On the return home I joked that the next rarity was falling out of the sky given the strong westerly winds coupled with torrential rain, little knowing the truth of what was to come.

It was my turn to 'man the nets' at Holland House gardens the following morning, as part of the observatory's routine netting procedure, so I woke just before 07:00 to cycle up and open at around 07:30. Given the breezy conditions I contemplated the effort, particularly considering the prevailing westerly winds had halted any real volume of continental songbird movement through the island, and I wondered whether I would ring any migrants at all. Given the date I maintained in my tired mind that it is always worth opening the nets during a migration period, if weather permits.

After around 20 minutes I set out to do a net-round. On arrival at a net ride, deep in the fuchsia, I saw a bird in the end of the lowest panel of the net. I hastily walked towards it and on closer inspection saw it was a small thrush with a blotchy brown breast.

After careful extraction from the net, I noted it had a much shorter bill and was far too small to be a Song Thrush, though too big and round to be a Nightingale, despite noting an overall rusty-brown tone. This was when the adrenaline kicked in and my heart started shooting its way out of my chest! I was in disbelief. I checked the underwing and the striking light and dark pattern confirmed what I had suspected: it was a Catharus thrush.

I placed the bird in a bird-bag and immediately checked the remaining nets before phoning the observatory and interested parties, exclaiming: "I think I've caught a Catharus thrush!"

I was met by the same dialogue from Mark Warren at the obs and my father at home: "Have you checked the underwing?!" To which I replied: "Yes!"

I remember anxiously and excitedly pacing to the ringing room and waiting for others to arrive. I was in the company of the bag with a bird without identification but enormous rarity. Having no previous experience with the genus, I searched my memory banks. I knew that Hermit Thrush had a rusty-brown tail but was comparatively duller on the upperparts. This bird had an overall rusty tone, so that ruled out one potential candidate. The only other thing I could remember was that Swainson's Thrush and Grey-cheeked Thrush were both rather grey-coloured. Having seen a photograph of a Swainson's Thrush in an Orkney Bird Report a few years ago, I thought the overall colour of this bird was too bright for this species; moreover, it lacked an obvious eye-ring. Could this bird be the far rarer species, Veery? 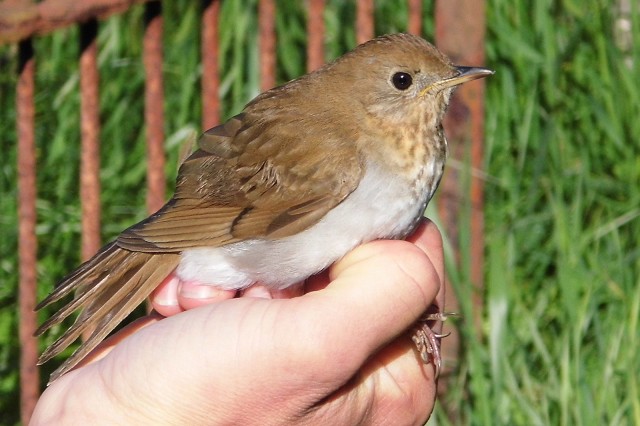 Within minutes people arrived. I remember thinking that this bird may have just crossed the Atlantic and that we needed to identify it, take biometrics and photographs then release it swiftly. Mark Warren and I confined ourselves in the ringing room and I decided that, given his experience, he should start taking the more complex biometrics required for such rare species, to minimise stress for the bird.

Initially there was some debate over its identification and consideration as to whether it was a brightly coloured Grey-cheeked Thrush, or perhaps even a Bicknell's Thrush, though after consultation with the American identification guide, it was becoming clearer that this was less likely. The emargination on the fifth primary feather and the fact the second primary feather was shorter than the fourth were indicative. I pointed out that the dull ringing room light was deceiving and that in fact the bird was much brighter than it appeared in there. When brought out into natural light, that became clear. Then the general consensus was that this was in fact the rarest species. Now completely sure that it was in fact a Veery, I fitted the numbered metal ring accordingly.

In-the-hand photographs were taken by extremely content onlookers, and then I released the bird in the nearby kirkyard. This was to avoid immediate recapture and to prevent any would-be observers from disturbing the ringing site or indeed the bird itself. Hugs and high-fives were exchanged as we all enjoyed the sheer rarity that this bird represented, and its unlikely discovery.

It seemed to disappear late morning from the kirkyard, and was present again in the exact same place it was discovered in the gardens in the evening. It was never seen in the dense gardens themselves and was only recaptured early the following morning during the mist-netting session. Overall there were just 10 observers including myself who witnessed this truly special bird, which had travelled the enormous distance from North America yet still looked in good condition. I will never forget that one particular morning in May on North Ronaldsay.

Blast from the past: Orkney's first and only previous record of Veery, coincidentally also trapped in Holland House garden, North Ronaldsay, on 30 September 2002 (Photo: Ross McGregor)