Rarity finders: Two-barred Crossbills in the Forest of Dean

The Forest of Dean has no shortage of cone-rich plantations, so in years where Two-barred Crossbills reach Britain in any numbers, my thoughts always turn to the possibility of finding one locally. When nine were found at Broomhead Reservoir in South Yorkshire back in August, I hit the web to remind myself of their calls. But, despite a good number of crossbills arriving in the forest, I failed to turn any of them into anything other than Commons. Fast forward to the evening of November 9th, and news had emerged that two male Two-barred Crossbills and a Great Grey Shrike had been found earlier in the day around Woorgreens GWT reserve by local birder Gavin Black and those attending a Gloucestershire RSPB Local Group walk he was leading. This marked only the second Two-barred Crossbill record for the county, the first being a well-twitched female at New Fancy View in 1998.

A number of local birders, including myself, managed to get there the following day but, despite nice views of the shrike, there was no sign of the crossbills. As Woorgreens is on my way to work, I decided to spend an hour there each morning throughout the week. Friday soon arrived, and although local birders had searched far and wide, there had still been no sign. Nevertheless, with nothing planned for Saturday, I decided I would spend the day walking around Kensley Inclosure checking likely spots.

Saturday 16th dawned and the weather was overcast but perfectly still — ideal for listening for calls and looking for quiet feeding birds moving in the tree tops. I arrived on site at 8am and started as I had done for the past seven days, walking past Kensley Lodge, where there were a couple of Hawfinches feeding in the Yew trees and a wheezing Brambling nearby. I carried on north along the track towards Crabtree Hill, entering the avenue of Western Hemlocks where the birds had originally been found a week earlier. It all seemed very quiet as the end of the hemlocks came into view. I was just starting to think about which way to head next when I heard crossbill calls coming from the east — Two-barred Crossbill calls at that! Listening to various recordings had paid off and luckily for me the birds were heading my way. Five crossbills flew directly over me and landed at the top of a tall hemlock along the edge of the track and immediately started giving the distinctive nasal "trumpet" calls. As the binoculars reached my eyes I was greeted with three male and two female Two-barred Crossbills — stunning! 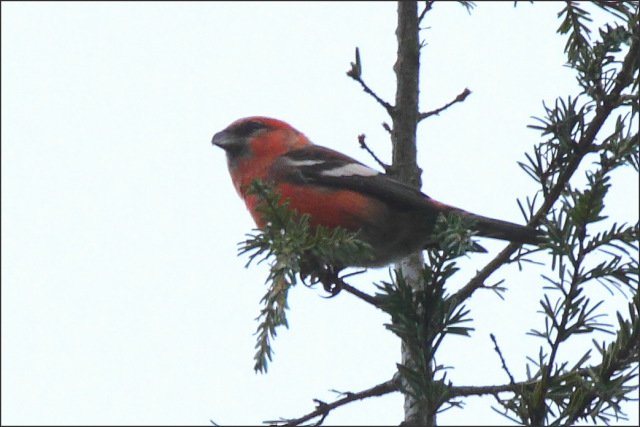 I wrestled my camera out of my rucksack and managed to get a few record shots before the birds dropped lower into the trees to feed. By a minor miracle I had phone reception and rang a few local birders to broadcast the news as quickly as possible. Now came the waiting game; what were the chances of the birds still being present by the time anyone arrived? All of a sudden the feeding birds started giving loud contact calls. I was looking up enjoying the sound and then realised what was happening, the calls were being answered from further north along the track. Five new birds flew in and joined the first five. I was convinced that there were now a minimum of ten Two-barred Crossbills feeding in the trees above me.

A few minutes later another local birder, Keith Colcombe, came strolling up the track and asked if I had seen anything, unaware of the news. "Yeah, there are Two-bars in here!" I replied in a loud whisper, "at least five, probably 10!" We waited, with not a single call coming from the trees, just the occasional sound of cones being opened and dropped to the ground. A flighty flock of Siskins had dropped into the same trees and eventually took flight taking a few of the Two-bars with them. Luckily they only flew around over our heads and back into the top of the same trees, giving fantastic views before dropping down again to feed.

The first birders who had received the news began to arrive and I decided to walk a little further up the track looking between trees to see if some of the flock was on view from there. Stupidly, I accidentally dropped my camera flushing the Siskin flock, again taking the crossbills with them, and this time they didn't seem to be stopping. I walked back to the others, apologetic and red-faced, and said that I would walk around the other side of the plantation where there was a clearing to see if the birds were feeding in the larches there. Keith came with me and, no sooner had we reached the clearing, we saw the Two-barred flock flying back towards the hemlocks and the other birders. I left Keith to look for the Great Grey Shrike that had been in the area and headed back to the other birders and, to my relief, they were looking intently at the Two-bars feeding in the hemlocks again, this time in full view on branches high above the track. More locals arrived and we were able to confirm at least seven birds, five males and two females.

It seemed that as the number of birders increased so did the number of birds. Keith came back down the track to let us know that the shrike was showing well on the heath. Several birders decided to go and have a look after having their fill of the Two-bars. Those of us still watching the 7+ Two-bars in the hemlocks were soon alerted to a call from Martin McGill who had gone for the shrike. Not only did they have the shrike but also another small flock of Two-bars: the total number now stood at 14+! 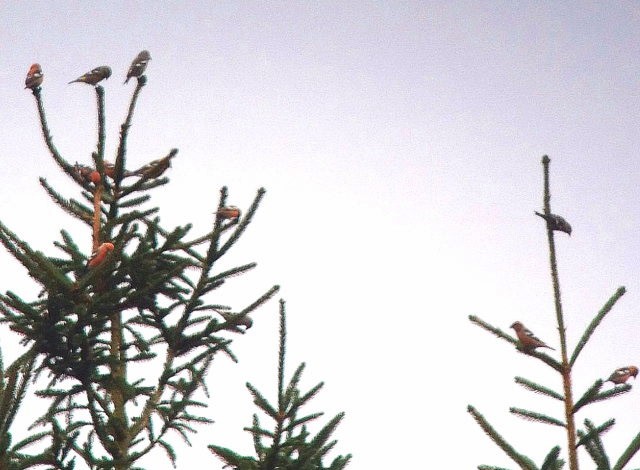 Eventually I decided to go and have a look at the shrike myself with a couple of friends, if only to give our necks a rest from all of the looking up. Others were already on the bird when we arrived and, to our astonishment, at the top of the pines around it were eight Two-barred Crossbills, giving their distinctive trumpet alarm calls and mobbing the shrike! The crossbills soon flew west leaving the shrike in peace and I decided that that was enough for me; I was in need of a sit down and a cup of tea. On the way back past the main twitch Richard Baatsen, our county recorder, informed us that there had been nine Two-bars feeding in the hemlocks while another eight were around the heath. This added up to at least 17 birds in the area, the third-largest flock ever recorded in Britain. I certainly won't be forgetting 16th November 2013 in a hurry!