I first started birding at a young age and have always had a keen interest in migrant birds appearing on the east coast, close to where I live, during autumn. Having recently graduated from Northumbria University this year, after completing a course in Environmental Science, I have had more time to go out birding with the aim of hopefully finding my own rarities. One particular area at which I have been focusing a lot of time is Trow Quarry in South Shields – a coastal site that has previously hosted many rare birds, such as Britain’s first Eastern Crowned Warbler in October 2009.

I had been keeping an eye on what was appearing along the east coast, with Wednesday 14 October producing scarce migrants such as Red-flanked Bluetail, and Dusky, Radde's and Pallas's Warblers up and down the country – I felt like it was a good time to head to the coast and see what was about. With a north-east wind blowing and spells of rain overnight, it looked and felt good for birds arriving on the coast.

The Taiga Flycatcher proved an accommodating customer during its five-day visit to Co Durham (Peter Hines).

I didn't arrive at Trow until after 12.30 pm, though it was apparent that a good arrival of birds was happening – Redwings and Blackbirds were flying inland overhead as I walked from the car down to the quarry. Upon entering the most northerly corner of the site, Goldcrest, Blackbirds and European Robins were the only birds of note, with a pair of European Stonechats also joining them. The 'Main Bowl' area was pretty similar, producing a good number of Redwings and Goldcrests also, as well as a Common Chiffchaff and two Blackcaps. Making my way south around the site, I crossed the main footpath and started to walk around the 'Southern Bowl' – an area consisting of two Elder trees and exposed grassy rockfaces. Scanning with my binoculars, I noticed a lot of movement within the smaller of the two Elders – with Dunnock, Robin and two Stonechats immediately apparent.

Moving closer toward the bushes another bird appeared from the ground and flitted across to the larger Elder. Here it sat for a few seconds, where I was able to note a brownish flycatcher, before it flew again. The bird was very flighty, feeding continuously and only stopping still for a few seconds at a time. After taking a few photos while it sat in one of the Elders, I reviewed these and saw what appeared to be a Red-breasted Flycatcher. I took a photo of my camera screen and posted it on Twitter to share with other local birders, before continuing to watch the bird feed for another 10 minutes or so, as it moved up and down the rock face frequently. 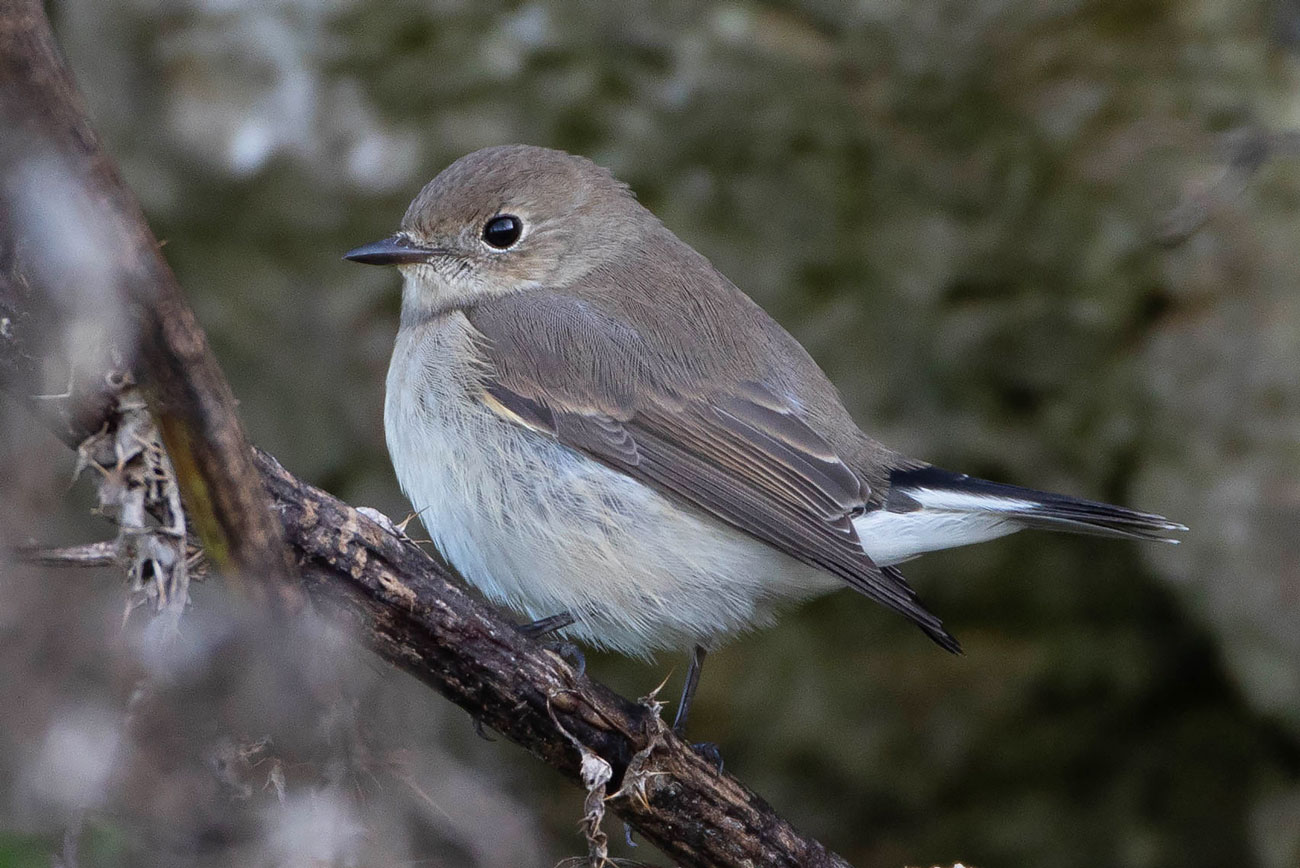 After working an area to the south known as 'The Mound' (an area of scrub and bushes to the south-west of Trow Quarry, at The Leas), I returned to where I had found the flycatcher. Local birder John Chapman had arrived after seeing the news, but I had to leave due to work commitments.

Upon finishing work, my phone was full of Twitter notifications and, after catching up on these, it was apparent there was something not quite right about the bird I had found. Another local birder, Stu Thompson, had connected and managed a range of images from different angles, which he also published as a Red-breasted Flycatcher. However, lots of other birders were quick to pick up on the pale tones within the bird's plumage, as well as black bill, jet black uppertail coverts and pale tertial fringing. More photos continued to circulate from other local birders throughout the night, with lots of speculation around the bird being a Taiga Flycatcher.

The next morning, the flycatcher was still present in the same area of the quarry, allowing around 70 birders to connect at first light – still with a lot of deliberation and speculation over its true identity. Faecal samples were collected and the bird continued to show well to the crowds throughout Friday, where it remained, following the same behavioural pattern; moving up and down the rockface feeding frequently. It wasn't until the Friday morning that the bird was heard to call for the first time and the identity confirmed beyond all doubt as a Taiga Flycatcher, with local birder Ian Mills noting the differences in its vocalisations to Red-breasted Flycatcher via sonograms (Taiga Flycatchers call faster than Red-breasted Flycatchers, managing between eight and nine individual notes in 0.2 seconds versus the four of Red-breasted). The bird continued on site over the weekend, showing very well at times, until the evening of Sunday 18th.

Amazingly, this is only the fourth record of Taiga Flycatcher for Britain, which I am pleased with, to say the least – a find that I was never anticipating, and still fully expected to be identified as a Red-breasted before the call was recorded. However, it also goes to show that the use of technology and social media has a large influence on the way birds are identified and how we bird in today's world, as well as the way it helps us to improve our knowledge of similar-looking species that may sometimes arrive on our shores. 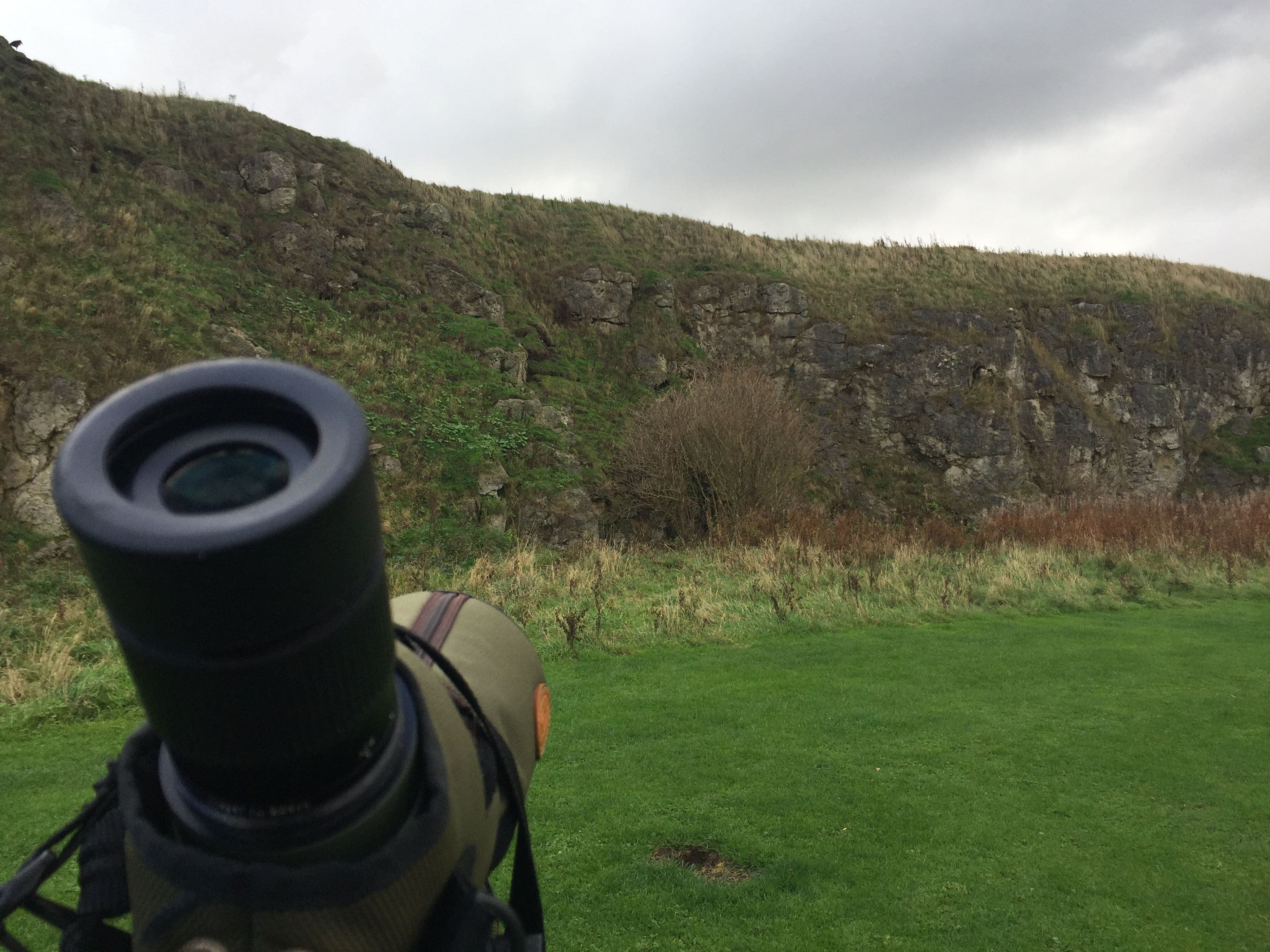 The Taiga Flycatcher favoured a small area of shrubs and the surrounding rockface during its stay in the North-East (Sam Viles).