For Kayn Forbes and I, Blakeney Point is a place we tend to meet up at during peak migration periods. It's a landscape that we have come to know and love and the process of seeking out migrant birds is a very different experience to what we typically do in our everyday lives and careers. We freely acknowledge that such visits go beyond a mere catch up and satisfy some basic hunting instinct.

Gazing ahead at a four-and-a half-mile shingle spit pointing out into the North Sea with a series of landward pointing arms, heavily vegetated with dense patches of Shrubby Sea-blite, is a daunting prospect. To cover all the main areas equates to 12 miles walking along difficult terrain. Couple this with the strong likelihood that on the majority of visits there will be nothing newsworthy to report has many who try it staggering back to Cley Beach car park proclaiming 'never again!'

Perhaps the best approach to birdwatching on Blakeney Point is to have low expectations, enjoy the landscape then treat whatever you unearth as a bonus. Regard it as a slog and it is guaranteed to become one! Persistence over time will at some stage be rewarded with memorable sightings – but all too often such rewards fall to those shirking the suaeda and taking the direct route straight to the famous Plantation. 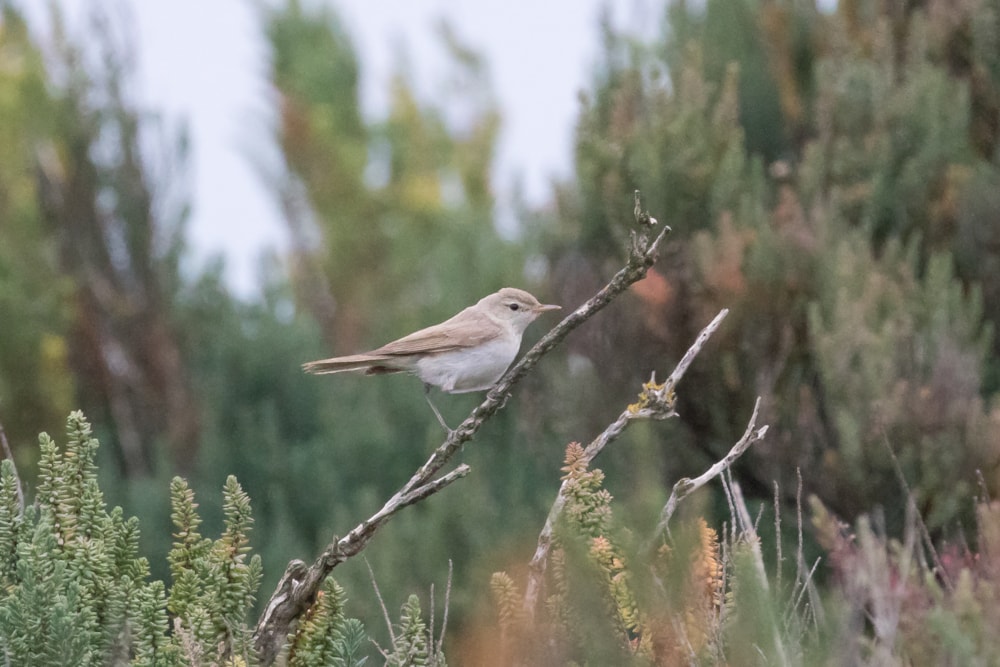 On 3 September 2021 we arranged to meet mid-morning but, I wasn’t able get there until an hour or so later. I sent Kayn a message explaining the situation and light-heartedly, tagged on the end of the text, the specific instruction 'don't find a Booted Warbler until I get there!' As I was gathering my things I received a hastily typed text, which ironically amounted to 'I think I'm onto a Booted Warbler at the Fairway'.

Initially I thought perhaps it was a wind up but, although Kayn has a very good sense of humour, this seemed a too obvious a joke for his taste. I sent him a congratulatory text but only with hindsight could I find amusement in the irony.  By the time I’d reached the area, Kayn had decided to check some other spots leaving me to locate the bird in the thick stretch of suaeda.

Through these dense swathes of vegetation are discrete pathways, the location of which once learnt provide routes through the main vegetated areas without damaging this unique habitat. My first wander through revealed nothing other than a moulting Reed Bunting. However, my return saw a strikingly pale warbler break cover and makea lengthy flight before diving back into the bushes.

I must admit its appearance rather stopped me in my tracks as the bird's proportions appeared longer than I expected, particularly the bill and tail. The plumage was also remarkably pale, but I was conscious that this was only first impressions based on a single flight view. The second view was essentially a repeat performance of the first. Some long distance perched views suggested that the wing was lacking contrast and the bill relatively long and spiky.

I was itching to get further views, but this was Kayn's bird and I thought it important that he was present before perusing other lines of thought. I sent him a quick message saying how amazing the bird looked then asked if he was 100% happy with the identification. He phoned back to say that he'd seen me at the site and was already heading over to meet me as there were a few aspects of the bird that didn't fit his past experience of Booted Warbler.

Kayn had previously seen a Booted but not Sykes's Warbler. I'd previously seen half-a-dozen Booted and also two Sykes]s Warblers, including a bird I'd found on Shetland which fortunately had enabled some priceless field experience in identifying this tricky species pair.

Within 10 minutes Kayn was beside me and I congratulated him on his discovery but added that he could have had the decency to wait until I was with him before he found it. He seemed surprisingly downbeat then admitted that he was annoyed that he'd edged towards Booted so quickly when there were a series of aspects of the bird that didn’t entirely fit his previous experience of the species. I was quite blunt with him stating he was being unnecessarily hard on himself and seldom is the identification of tricky rare birds as smooth a process as many published write-ups suggest. After all he'd achieved by far the hardest part by finding the bird in the first place and the identification of his bird could yet go either way.

In a roundabout way we realised that in reality the identification process was still in the early stages and it was then time to channel our energy into correctly naming the bird. We decided to scrap everything previously said and start the process again as if the bird had just been found, starting with the basics before concentrating on detail. The bird continued to be quite flighty but bit by bit we started to get better views and slowly made progress piecing together the jigsaw, discussing our impressions at each stage.

Structurally it genuinely did appear longer-tailed and longer-billed than our previous experience of Booted and the bird habitually adopted a horizontal posture when moving through the bushes. Although it was obviously one of the smaller Iduna pair, it did at times bear a resemblance to a small pale Blyth's Reed Warbler in its proportions and posture – something we had not noted previously in Booted. The overall field appearance was strikingly pale and the tone of the upperparts and gleaming white underparts were paler than even the palest Booted Warblers we'd encounted at the same site and in the exact same habitat. 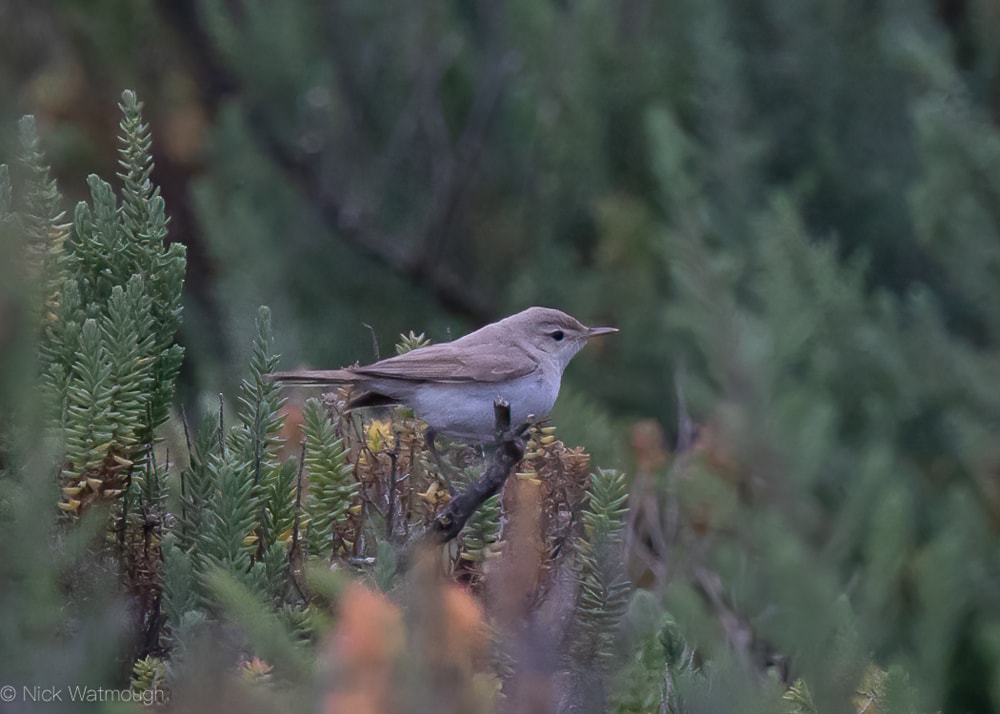 Looking closer, the wings were quite worn and lacking in contrast across all the feather tracts and, importantly, the tertials lacked the contrasting dark tertial centres that typically characterise Booted. The tail appeared proportionally longer than in Booted and, in common with the wings, was worn in appearance. At times there were also hints of fault bars across the tail suggesting that, despite the worn appearance, this was a first calendar year bird. The outermost tail feathers were whiter and clearly shorter than the neighbouring tail feathers.

Assessing the face pattern and facial expression was an interesting exercise as the influence of light and shade could greatly affect the apparent pattern of the supercilium and eyestripe. But in bright overcast conditions it was clear to see the bird had weaker head markings than is seen in Booted. This was especially true of the lores which were all pale except for small darker dash immediately in front of the eye. This detail gave the bird a somewhat open expression and served to highlight the bird's gape the result was a very different 'look' than is typically seen in Booted Warbler.

After a long intense process it did appear that Kayn's bird appeared to be a Sykes's, however, before we felt confident enough to release news of the we suddenly became mindful of the possibility of a worn adult Booted Warbler. A slight wave of tension grabbed us for a short while but we were confident that this line of thought could be ruled out on structure alone and the bird was indeed a Sykes's Warbler.

We could then fully relax and simply enjoy watching this strikingly pale and exciting looking vagrant. Very quickly the first locals began to arrive and by the evening a large crowd had gathered to admire the bird.