This is the fifth year that a group of us has spent a mid-autumn week on Sanday, Orkney. It's a beautiful island with a wide range of habitats, ensuring that there is pretty much something to look at in most weather conditions: waders, wildfowl and small migrants. We've learnt that the winds don't need to be easterly for the island to deliver. Our two previous best birds — Blyth's Reed Warbler in 2012 and Laughing Gull in 2013 — arrived on light to moderate westerlies.

I'd spent the afternoon on Start Point, and despite a strengthening westerly breeze there had been a few Goldcrests and Redwing arriving. Having received a text from Graeme Garner, David Douglas and I decided to go and help him relocate a skulking warbler. Together with Tim Sykes we spent about an hour walking up and down ditches and through nettlebeds, but to no avail. Having decided to call it a day, we headed home and I asked to be dropped off at the end of Cleat cottages to walk back to our house in Lady.

As I headed along the cottages, a small thrush flew up from a field and landed on the gravel at the side of a house. I was about 50 m from the bird, but I was sure that as it landed I'd seen a white panel on the underwing. It then flew around the back of the house and out of view.

The owner kindly gave me permission to go into the back garden, and as I crept around the side of the house I found the thrush on the ground but it immediately flew into a small sycamore and settled at the back, only partly in view. I still wasn't completely sure that I was gauging size correctly, but then a sparrow flew in above the thrush and it was clear just how small it was.

I was now struggling a little to hold my bins steady with the excitement, and the bird remained pretty much hidden at the back of the tree. I managed to phone David Douglas, who was close by, to say I had a Catharus thrush and to bring the telescopes. The bird then came to the edge of the sycamore and showed well but in bright sunlight. I could now see that the spotting on the underparts was largely confined to the breast and that it had a very strong eye-ring, a buff stripe above the lores and a clear dark malar stripe. It then flew up on to a gate showing fully out in the open and I could see no red in the tail. Collectively these features seemed to rule out all species except Swainson's Thrush, but the spotting on the breast had looked quite brown rather than black, and the bird appeared warm-coloured. Better views later confirmed that this impression was simply due to the strong light. 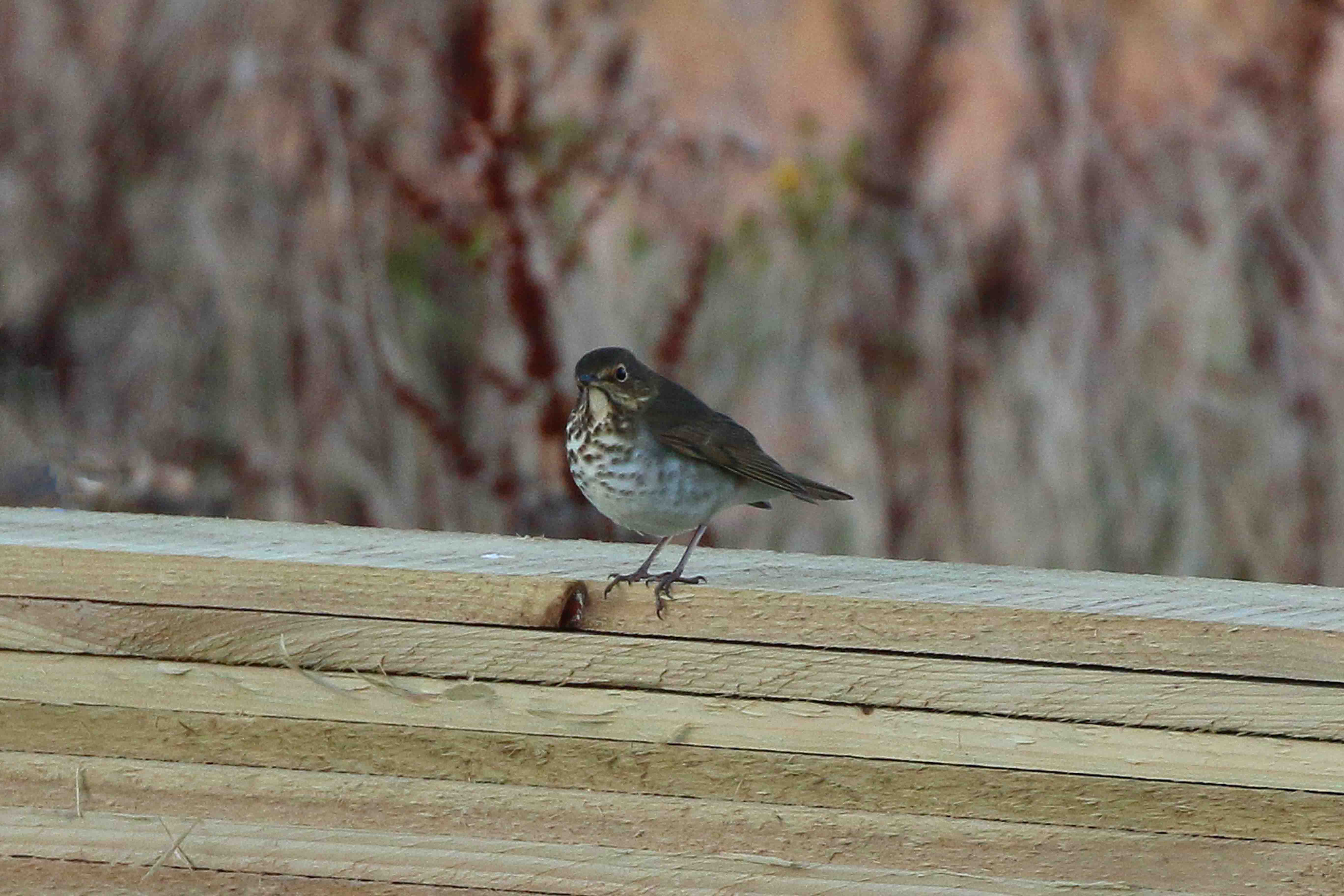 Just as David was arriving, the bird hopped up on to the gate post providing only a brief view before it went back round the front of the house. It was then chased off by a Northern Wheatear and we were unable to locate the bird for a further 20 minutes, during which time the other four members of our group arrived (namely, Graeme Garner, Mark Lewis, Tim Sykes and Andrew Whewell). David's views were not good enough to confirm Swainson's and I wasn't sure if I had enough detail for the record to be accepted. More importantly there were only about 30 minutes of daylight left, and so there was a real feeling that this might be one that would get away and not everyone would see the rarest bird we'd found on Sanday.

We split up to walk around the area and luckily Tim Sykes relocated the bird a little further down the road. The sight of the other five of us 'running' down the road dragging telescopes must have been truly ridiculous — hopefully there aren't any videos — and will have only strengthened the belief of the residents that we're genuinely mad. Tim confirmed he'd seen enough to be confident of Swainson's, and once everyone was in position he went round to where he'd seen it last and it flew, first onto an unoccupied house and then into its small garden. Here it went on to show fantastically well for at least 15 minutes.

Everyone was able to enjoy great views through telescopes from about 15 m away and some really good photos were taken. It really was pretty special. The light was now perfect, the wind dropped and the bird could not have shown any better. 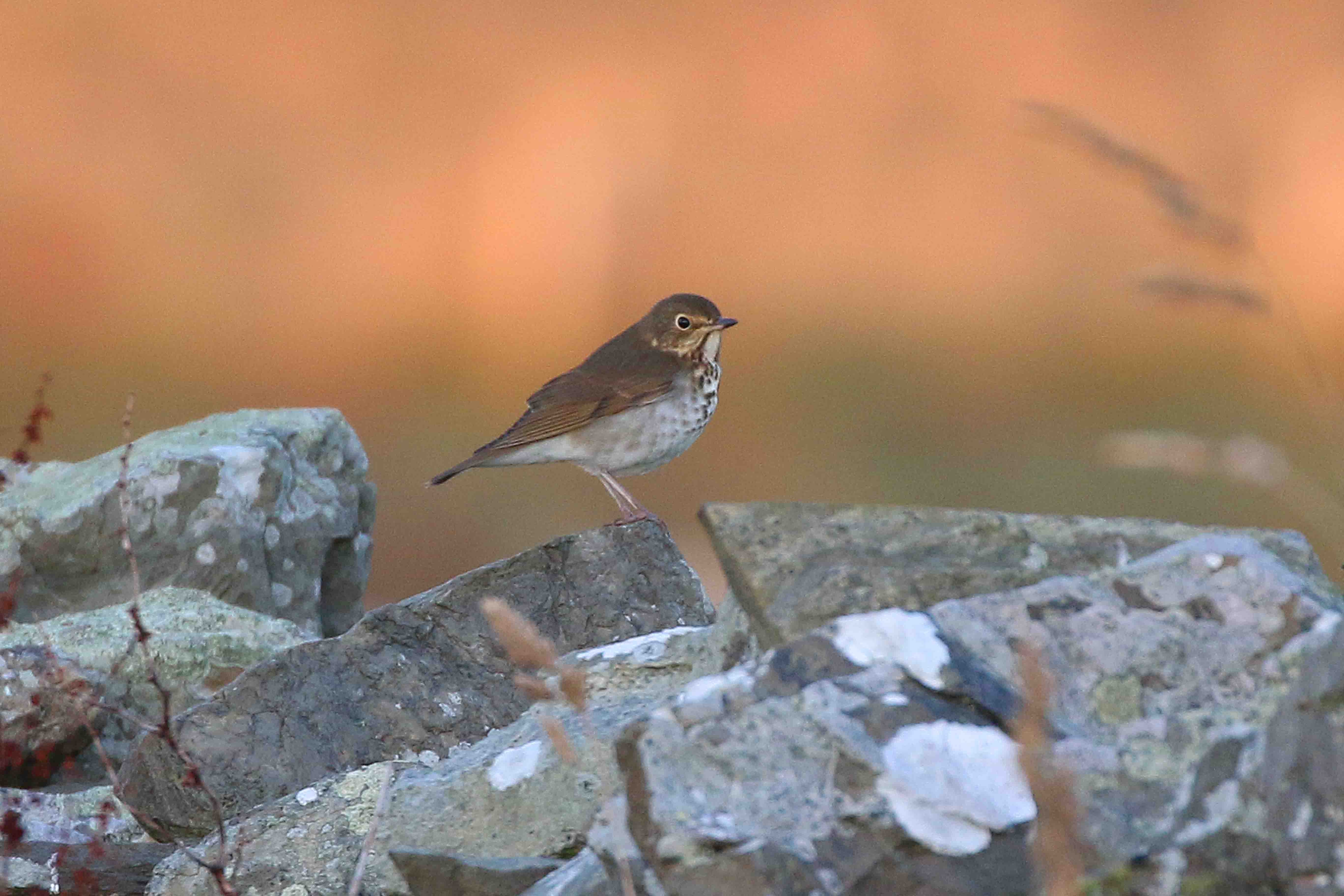 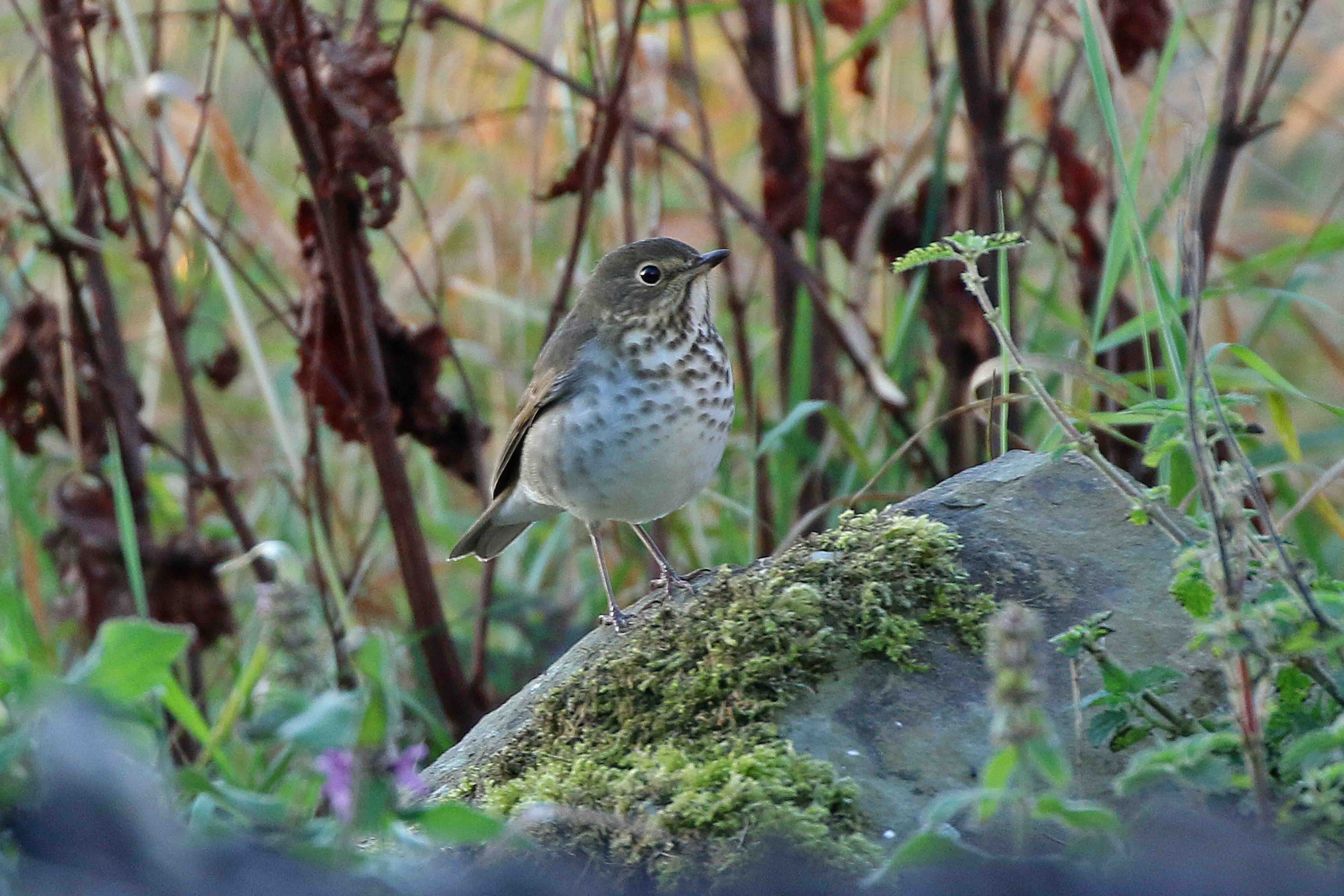 It was getting late so we left the bird to roost, returning first thing the following morning and several times during the day. However, following a clear night the bird seemed to have left and could not be relocated.

Every trip to Sanday has been extremely enjoyable but I think we all felt that this was the bird that finally rewarded all of our efforts over the years under often pretty inclement weather conditions.