My wife Sandra and I moved to the island of Westray, Orkney, in 2011. Over the years since then we have found a few interesting scarce and rare migrants, although, being on the west side of the archipelago, we don't get anything like the number of good birds as, for example, North Ronaldsay. One of the best birds we had found was a Sharp-tailed Sandpiper in 2012 at Loch of Swartmill, which is just a couple of miles from our house. Swartmill is a shallow loch very close to the sea at Bay of Swartmill and if water levels are low in the summer, it can be great for waders – hence the Sharp-tailed.

During autumn, the loch plays host to varying numbers of waterfowl moving down from northerly breeding areas such as Iceland. These include Whooper Swans and large numbers of Eurasian Wigeon and Eurasian Teal, with smaller numbers of Mallard and Northern Pintail among others. There can sometimes be one or two more marine species like Long-tailed Duck and Greater Scaup.

On 26 October, we had seen an American Wigeon here and, on the afternoon of 29th, we stopped to scan the loch to see if this or anything else of note was about. While I was scoping the Wigeon flock, Sandra, who was using binoculars, said she had seen an odd-looking duck. I got the scope onto the bird in question and, I must admit, was at first puzzled as to what it was. It was clearly a fairly compact diving duck and was in fact diving repeatedly. The bird was fairly distant but I noticed that it had two thin wing bars which could be seen as the bird swam side on. Excitement rapidly mounted as I realised that this was a feature exhibited by Steller's Eider. Having never seen this species before (and the bird in front of us not being a distinctive adult drake!), I wasn't 100% sure of this so grabbed my copy of Collins Bird Guide from the car. Bingo! I just couldn't believe what I was seeing. 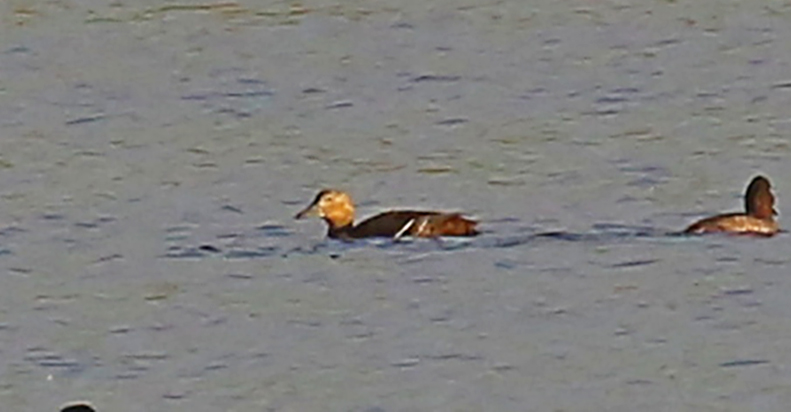 The two white wingbars, as well as distinctive bill and head shape, are clearly apparent in this image (Don Otter).

We watched the bird for almost an hour and Sandra managed to take some distant photos. During this time it was possible to see the following details. As stated, the bird was a compact duck, nothing like the shape of a Common Eider. The head was quite angular, steep at the back and at the forehead with a flat crown. The grey bill was broad and squared off at the tip. The overall colour of the bird varied as it turned in the sun, sometimes appearing dark brown and sometimes looking paler. Despite being fairly distant, it was possible to make out vertical dark stripes on the flanks and near the base of the tail. Two white wing bars could be seen but these were relatively faint and narrow leading me to believe this to be a young bird rather than an adult female. This was seemingly backed up by the fact that I could not see the long tertials which an adult would be expected to show. The bird flapped its wings a few times, showing the underside to be very pale. It was diving pretty constantly but would occasionally stop to preen. 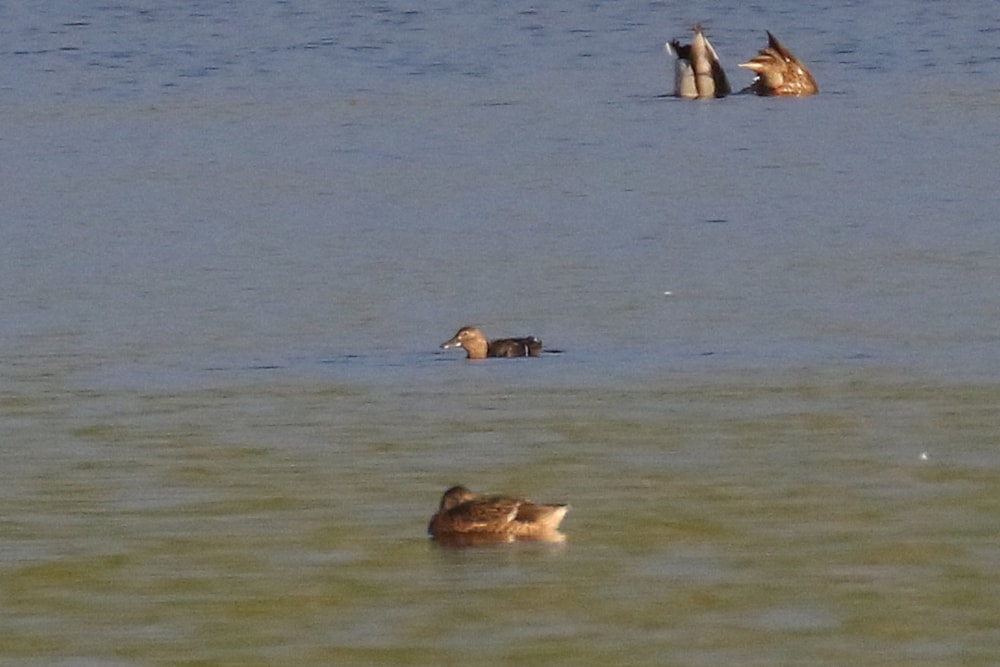 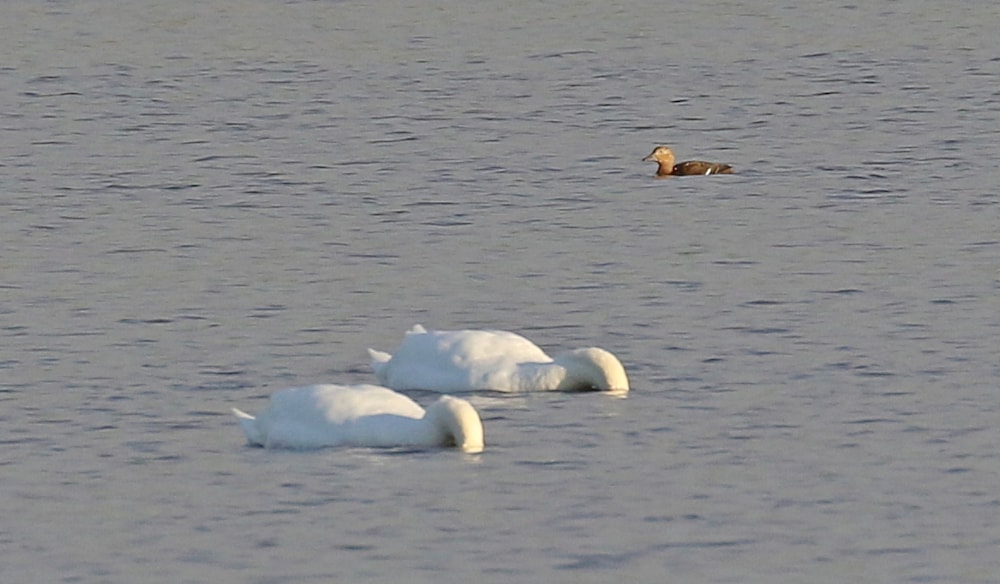 We revisited the site a little later and the bird was present until it was too dark to see it any longer. We also managed to show it to a couple of friends from the island. The next day, a few birders from the mainland came across but the bird failed to show for most of the day. However, at about 3.45 pm we stopped by the loch and almost immediately located the bird. Unfortunately, none of the visiting birders were present. Within a few minutes of re-finding the bird, the wigeon flock was inadvertently flushed by some children who were playing by the loch shore and the bird disappeared with them. On 31 October several visiting birders were again present but the bird failed to show. We were left with mixed feelings – excited to have found such a great bird but sad that none of the visitors had managed to connect with it. 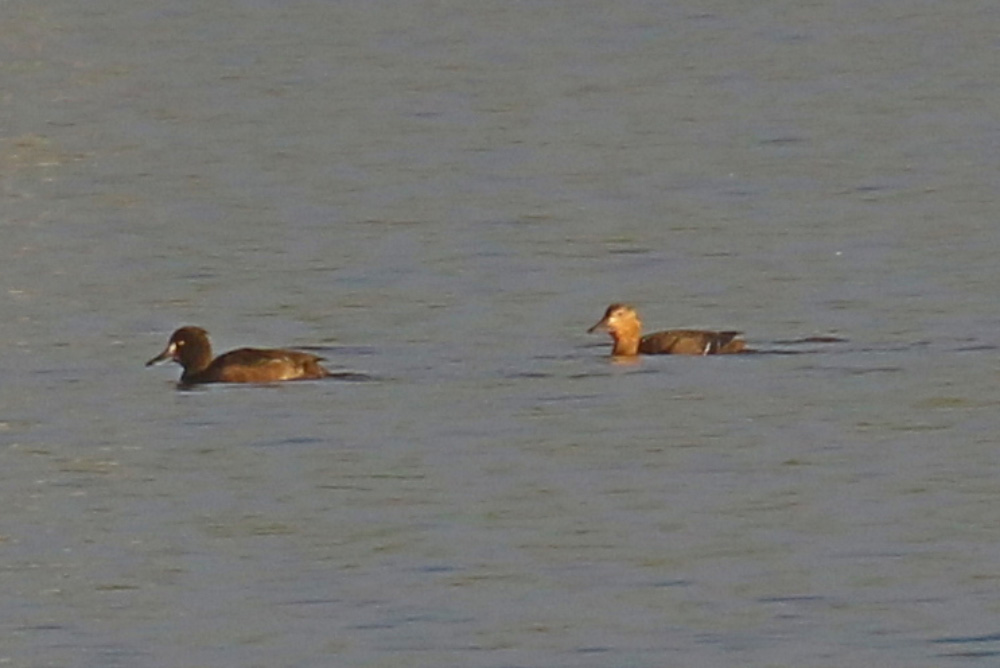 Steller's Eider is an Arctic-breeding duck, found in northern Siberia and Alaska. It tends to winter at relatively high latitudes and is scarce away from these favoured areas. In the Western Palearctic, the easiest place to encounter the species is either in Estonia or northern Norway in winter. While the combined Western Palearctic wintering population did not decline between the 1990s and 2009, many more birds are now lingering in Russian waters rather than continuing on to either Norway or the Baltic Sea, with climate change cited as a likely reason for this, with birds increasingly 'short-stopping'.

There are 30 accepted British records, although the true number of individual birds involved is around half that – several records refer to a long-staying drake on South Uist between 1972 and 1984, while a returning drake also frequented Papa Westray and Westray, Orkney, in 1974 and 1978-82. If one thing is clear, it is that records have dried up since the South Uist bird disappeared – the wing of a drake was found along the shore at Tresta, Fetlar, Shetland, on 31 March 1996 but, this aside, there is only one other record between 1985 and 2018, that being the three-day bird at Hopeman, Moray, from 16-18 November 2000. It is therefore one of the most desired of all species on the British list among keen listers not old enough to have seen either the Hopeman or South Uist birds.