It was a beautiful autumn afternoon on 12 September 2020 and I had just seen off a ship full of happy visitors from Lundy Island. I still had a few bits to do before finishing up for the evening but decided to take a quick jaunt along the east coast to try and find a first-winter Red-backed Shrike, a bird which had been seen by Tim Jones and Tim Davis earlier in the afternoon. I was told the bird was flighty and therefore ranging widely over this area – being seen last at around 2 pm above Rüppell's Quarry – a small and damp quarry, home to some stunning mature willow trees and, of course, a singing male Rüppell's Warbler on 1 June 1979.

I decided to take the high road first, ambling slowly through the narrow, heather-bordered path above the Quarries towards Halfway Wall Bay. Unfortunately there was no sign of the shrike 'up top' so I decided to pop down to the Lower East Side Path to try my luck.

It was then as I reached the Terrace, formerly an old stone platform which the Lundy Quarry company built in 1863 to shift, shape and load granite from the island onto ships in the bay below. Now the site is home to a handful of mature willows, thick fruiting brambles and flowering ivy, and is a superb area for invertebrates and avian migrants.

I was just passing the old Heligoland trap when a flash of brown scurried inches past my feet from a stack of old Rhododendron wood to a clump of thick brambles on the other side of the narrow path. My first thoughts from this brief encounter was that I had found a Water Rail – a species which moves through Lundy in small numbers at this time of year – and one that had found itself in atypical habitat.

Pinpointing the area of scrub where the bird had run into, I managed to part the brambles and bracken to see that it was sitting tight and low to the ground just next to the path. Unable to see the bird fully from any angle, I then decided to brave the prickly wrath of the brambles and reach in to try and catch it. Luckily, it didn't move as I did so, and I embraced the bird gently and safely in the ringers' grip. 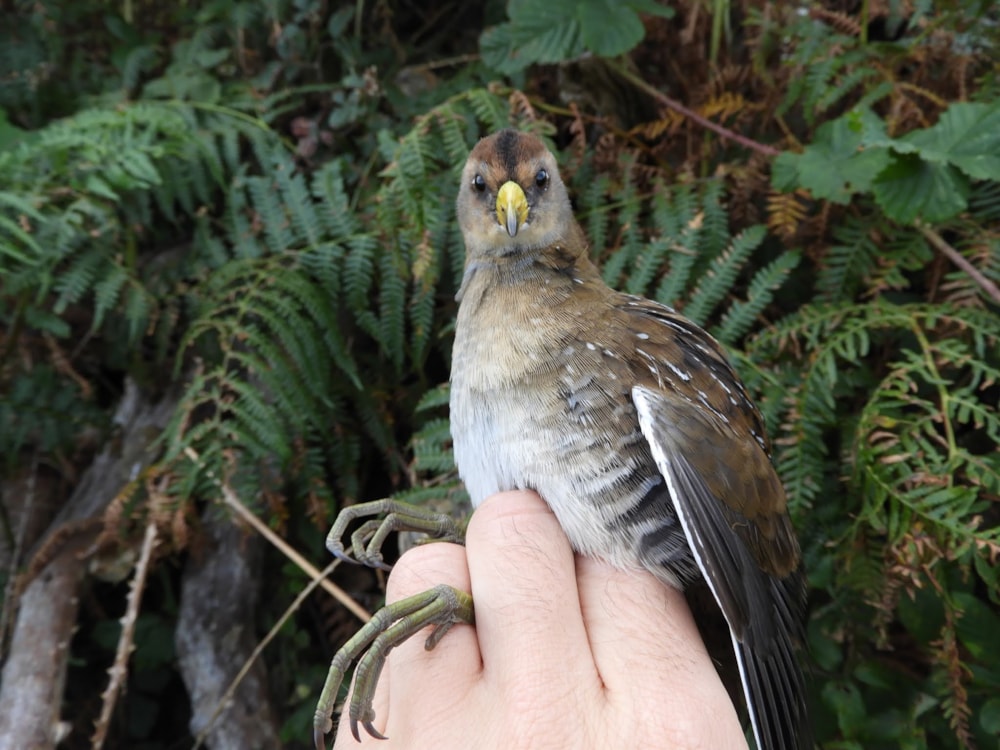 The Sora was so tired when found on 12 September that Dean was able to reach into a bush and carefully pick it up (Dean Jones).

I pulled the mystery rallid out from the brambles very slowly so as not to harm it in any way. It was then I first caught sight of the bird's beautifully patterned back, thick yellow bill and dark central crown-stripe – my heart started racing! The bird was obviously exhausted from a long journey but still alert and bright eyed. Conscious that it wasn't in the best of condition and of course, not to stress the bird too much, I quickly took a series of photographs before taking it to an area where there was plenty of fresh water, heaps of invertebrates to feed on and of course some cover to allow it to recover.

Being very rusty with my juvenile crake ID – last seeing Spotted Crake some five years or so when I lived on Samos, Greece – I then sent some back-of-camera shots to my birding friends for confirmation. Friends who were unfortunately en route back to Ilfracombe after leaving the island only an hour before!

Fortunately, I managed to get a strong enough internet connection to receive some illustrations of Sora via WhatsApp. The lack of fine spots on the bird's neck and breast, absence of white transverse bars on the wing, thick, bright yellow bill lacking a red base and, of course, a distinct dark central crown-stripe – I really had found a juvenile Sora! I couldn't believe my luck. 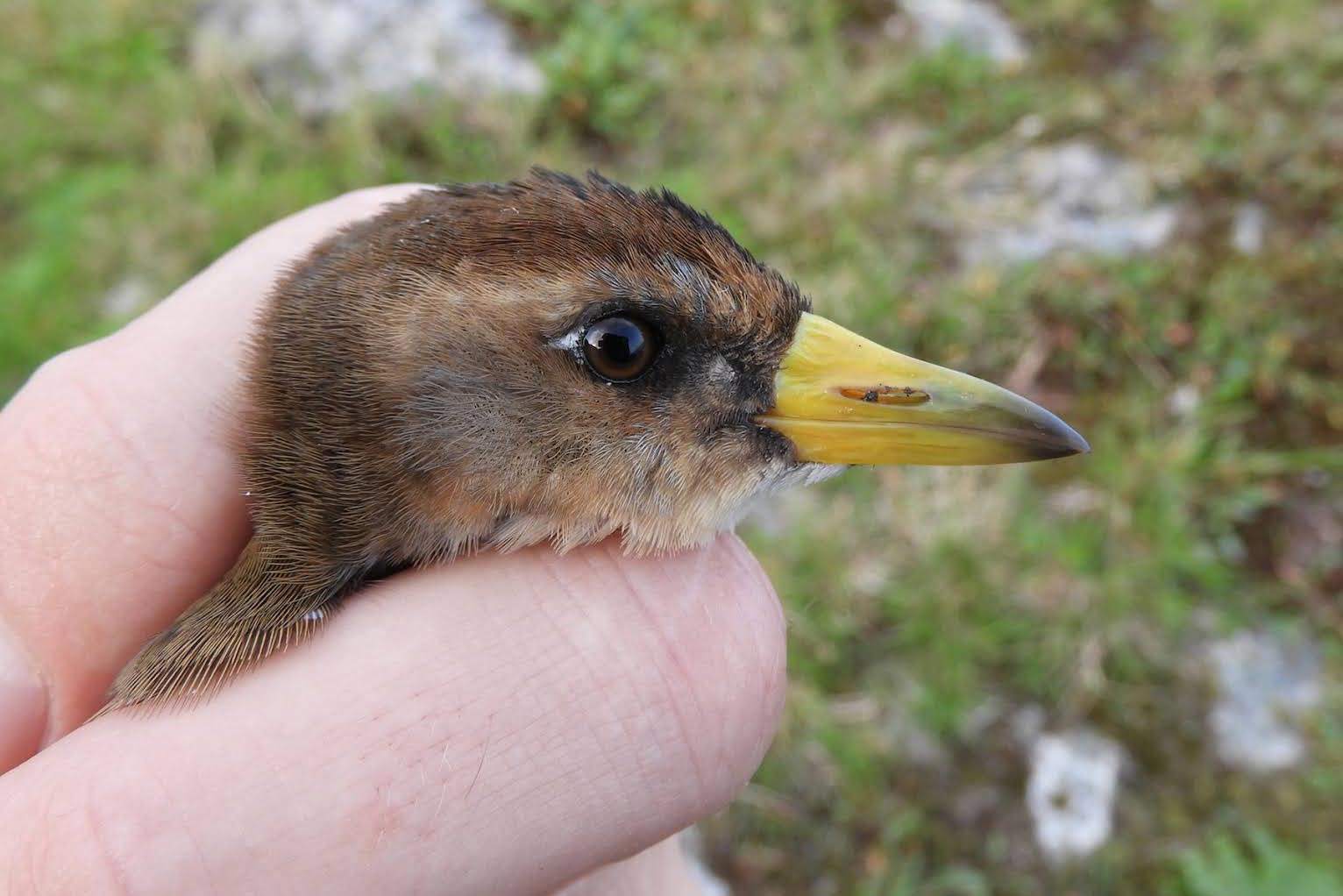 In-hand study showed the bird to have a clearly yellow bill with darker tip, lacking any red at the base as in Spotted Crake. Furthermore, a ghosting of the 'mask' shown by mature Soras can be seen around the bill base, lores and eye (Dean Woodfin Jones).

The rest of the day was spent in a state of disbelief and, thinking back to it, I can't actually remember finishing off the day's chores!

The next morning I awoke before first light to see if I could find the bird again and check on its health. I thoroughly searched the area but to no avail, therefore was hopeful that it had either recovered and was feeding somewhere else on the island or had moved on overnight.

Later that evening after another unsuccessful trip to find the bird in the early afternoon, I received news that volunteer Assistant Warden Ben Hanson had seen it at around 4 pm where I had originally found it. Here he watched it for around 20 minutes zipping around the area, stopping periodically to peak at the ground for invertebrates. It was great to hear that the bird was in better health. There were numerous subsequent searches after 13th, but it had evidently moved on.

Following a Killdeer on 16 March and a Bridled Tern on 26 August, 2020 is shaping up to be a mega year for birds on the island – what will be next? On Lundy, it could be anything!

Dean is the warden of Lundy Island.