Having passed February's Birdwatch for press, I had been at home catching up with the riveting task of my tax return. With that sorted out by lunchtime on Thursday 13 January, I decided to spend the afternoon at my local patch, Rainham Marshes. However, as I drove past the adjacent landfill site there were so many gulls present that a change of plan was called for. Rainham is an excellent place for 'gulling' and, having found the occasional larid of interest there previously, I decided to check it out, keeping my camera and telephoto lens at the ready over my shoulder.

From the perimeter I began scanning through the huge numbers of birds on the tip. After an hour had passed, with just a single adult Yellow-legged Gull to show for my efforts, I wondered if I had made the right move. But then something extraordinary happened. Panning through the swarm for about the eighth time, my gaze froze on a striking-looking bird, and almost immediately an adrenaline surge kicked in. "Adult Slaty-backed Gull!" was my instant thought, while scarcely believing what I was seeing. I looked again, trying hard to remain calm, yet the bird still seemed to scream 'Slaty-back!' – potentially a new species for Britain. 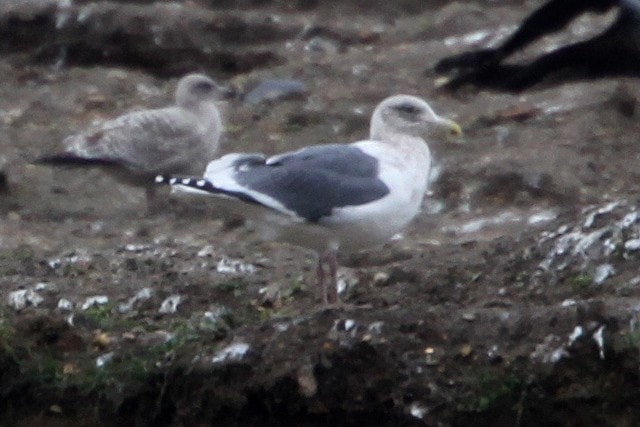 As another gull flushed it a few metres away, I fired off some quick shots through the chain-link fence to get images while I still could. They were not as clear, sharp and bright as the bird was 'in life', but at least I had something for the record. I also began to note some of its key features.

It was bulky and solid, though different in character to Great Black-backed Gull. The head was less powerful than the latter, more like Herring, and its body profile was more pot-bellied and slightly shorter legged than Great Black-backed.

It had slate-grey upperparts and distinctive broad white tertial edges. These continued conspicuously along the secondaries, showing as an obvious white lower edge to the folded wing. The upperparts were uniformly and solidly grey and had a very slight bluish cast, subtly different to graellsii Lesser Black-backed.

Its primaries were black, with four conspicuous white tips visible beyond the tertials at rest, and its tail white. The head and neck were extensively streaked pale greyish-brown, forming a diffuse hood which extended down the breast, becoming less boldly marked. This streaking was densest around the eye. The remaining underparts were unsullied white.

Its iris was yellow. The bill was a dull yellow too, dullest and more colourless towards the base and brightening towards the tip, with a small red spot near the tip of the lower mandible, and not especially bulbous at the gonys. The legs were pink.

Having noted these key details, I had to try to get other local birders to see it. While I was on the first frantic call, to Howard Vaughan at the nearby RSPB reserve, the gull took off and flew through the throng towards Wennington Marshes.

After more hurried calls reinforcements arrived, but we couldn't refind the bird before dark. I remained happy that it was probably a Slaty-backed Gull, a species I had last seen 10 years previously in South Korea. However, Andy Tweed had brought Gulls of the Americas with him, and images of darker-mantled adult-type Slaty-backeds caused me some concern, as this bird was closer in tone to graellsii Lesser Black-backed Gull. Clearly, caution had to be exercised.

At home that evening, I contacted Martin Garner for some early feedback. His response was encouraging, and helpfully he contacted Chris Gibbins, who had found the Latvian Slaty-backed Gull, and who also had experience of the species in Asia. Chris was positive too, and both he and Martin felt that the tone of the upperparts probably fell within the likely variation of the species. Both also stressed the need for images of the open wing-tip to help clinch the identification.

I'd uploaded my record shots online for Martin and Chris to view, but became aware that they were also starting to get hits from elsewhere. With initial views of the ID supportive and interest increasing, I felt I had to post about the bird publicly, couching it on my personal Slaty-backed Gull blog at www.birdingetc.com as a 'candidate' Slaty-backed Gull, and soliciting further opinions.

Back at Rainham the next day, I was determined to get shots of the wing-tip, but first the bird had to reappear. Surprisingly few birders were in evidence for a potential British first, but Richard Millington saw it very briefly and he too was enthusiastic about the identification.

Later that morning, Laurence Pitcher and others finally refound it on Wennington Marshes. It soon moved again, and Paul Whiteman called me to say it had flown back towards the landfill. Within 20 minutes I managed to relocate it, and in that pulse-quickening encounter I fired off several shots on the ground, and then more in flight as it departed. There was no further sign until just over an hour later, when I picked it out again very distantly on the far side of the landfill. This time, by phoning directions to Andy Tweed, the 25 or so birders standing outside the landfill got to see it. 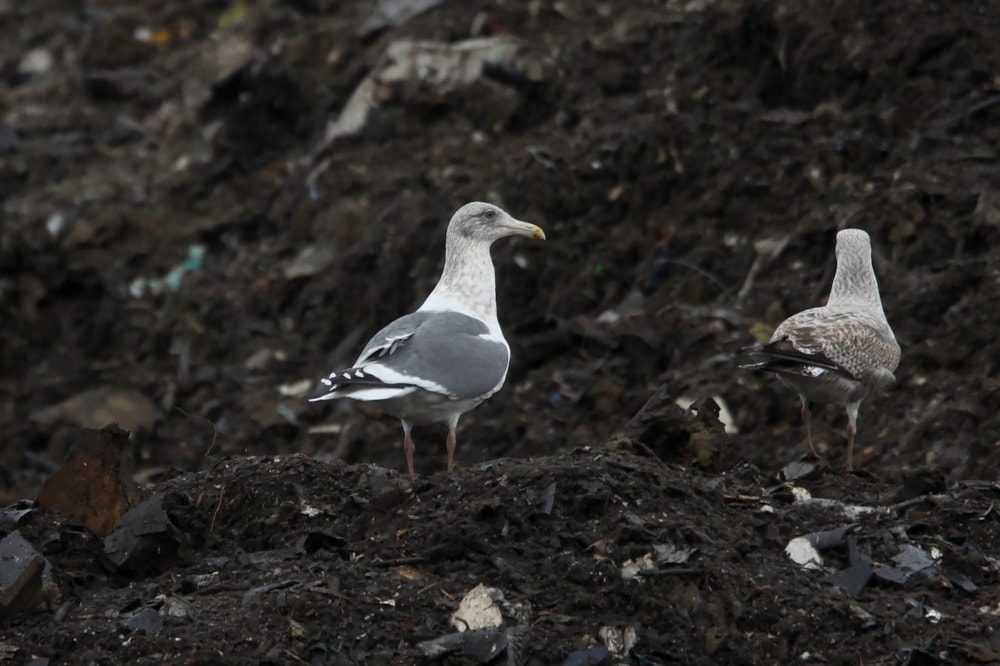 This image of the bird – perhaps a near-adult – shows most of the diagnostic features typical of Slaty-backed Gull, as well as the bulky and wide-legged character of the bird. Note the pattern of head and neck streaking. (Dominic Mitchell).

That evening, flight shots taken by Adrian Webb and myself were analysed. They revealed that, as well as a very broad white trailing edge to the secondaries which narrowed on the inner primaries and a dark 'shadow' on the underside of the flight feathers, the bird indeed showed the critical 'string of pearls' feature – the tips of the white 'tongues' to the inner webs of P5-P8, which are separated from the white feather tips by black subterminal markings. With this confirmation, the bird's status was dramatically upgraded and it was mega-alerted as an adult Slaty-backed Gull. 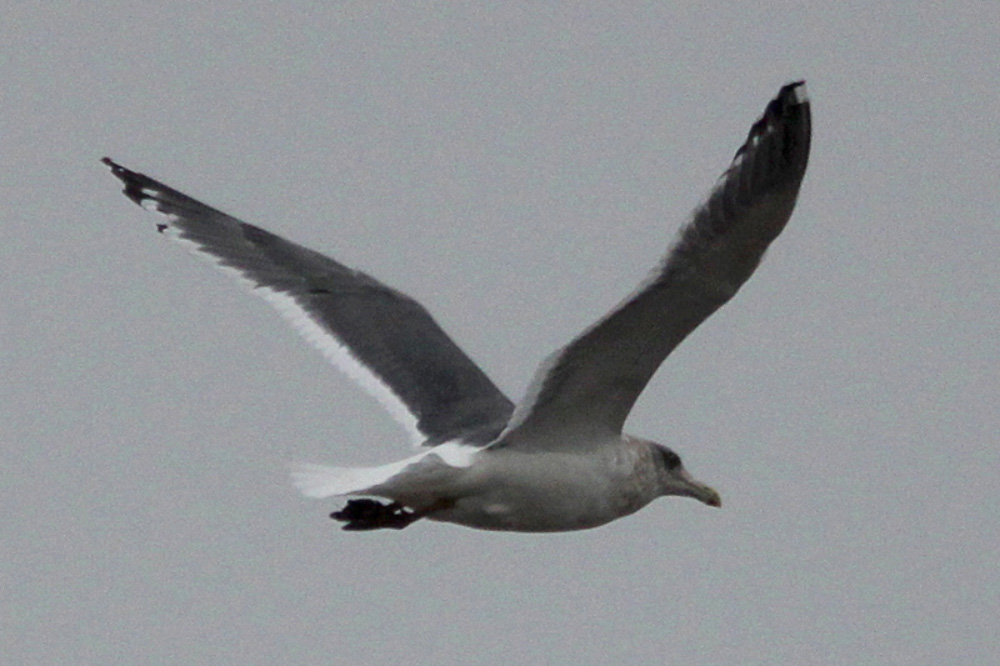 The Slaty-backed Gull stood out strikingly in flight. The all-important wing-tip pattern, showing the 'string of pearls' near the tips of P5, 6, 7 and 8 (Dominic Mitchell).

The next morning, a Saturday, saw more than 1,200 birders arrive hoping to see the bird. There was no mass sighting, however, and it wasn't seen there subsequently. Amazingly, however, it was refound to the east on 3 February, at Pitsea, Essex.

Thanks to Martin Garner, Chris Gibbins and Osao and Michiaki Ujihara for their swift feedback, and to the many who discussed this bird with me. I am particularly grateful to the management at Veolia Environmental Services, and to staff and volunteers at Rainham Marshes RSPB, who coped admirably when the reserve was swamped with visitors.

ID under the microscope

In this digital age the identification of major rarities is analysed at an increasingly forensic level, especially when hybrids have the potential to cloud the issue.

As well as soliciting views from British gull experts, initial opinions were also sought from Japan – where Slaty-backed Gull is a very numerous and familiar species – and on the ID-Frontiers email group. Japanese gull gurus Osao and Michiaki Ujihara, who have extensive field experience of the species, felt the Rainham gull was a Slaty-backed, saying they "can't find any wrong feature. Its overall appearance including the short-winged structure, wide tertial crescent, moderately dark mantle shade and 'string of pearls' look very nice. What a great find!"

The issue of the bird's mantle tone was cited by some as potentially problematic, leading to lengthy online debate and the suggestion of a possible hybrid origin. Previous discussion on vagrant Slaty-backed Gulls in Connecticut and Newfoundland covered similar ground, and on this the Ujiharas commented that "In our experience, mantles of Slaty-backed Gulls are not as dark as American birders often expect".

They believe the Kodak grey scale values quoted in Howell and Dunn 2007, compared here with the two black-backed species, are the most accurate:

Slaty-backed Gull thus overlaps extensively with graellsii Lesser Black-backed, but not at all with Great Black-backed. The Rainham bird would be at the pale end of the spectrum, and subsequent image research has shown that such birds are not unusual. This may also have a bearing on the perceived lightness of the 'shadow' on its underwing, but from images taken in Japan this also appears variable. 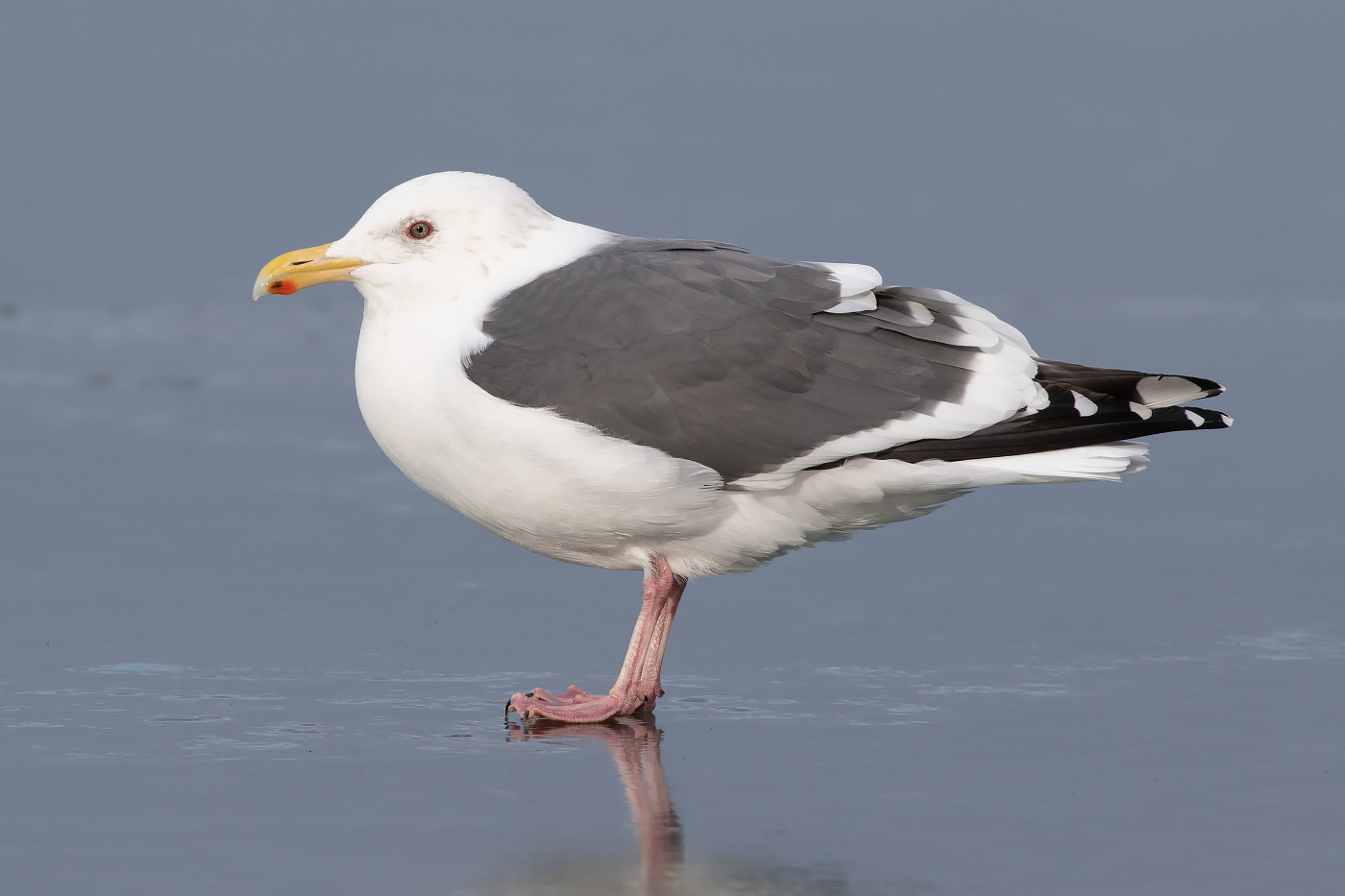 A majority of adult-type Slaty-backeds show bright lemon-yellow eyes, whereas the Rainham bird had duller (though not dark) irides; this feature is shown by up to 30% of birds (Olsen and Larsson 2003), so is also unproblematic.

What of the hybrid possibility? Slaty-backed Gull has hybridised with Vega and Glaucous-winged Gulls, but the range overlap with both species is small, and hybridisation is far less frequent than in the oft-quoted example of Glaucous-winged and Western Gulls in western North America. Out of a world population of 100,000 Slaty-backed Gulls, adult hybrids must be a tiny proportion of the total – and the chances of a pure individual reaching Western Europe vastly outweigh a hybrid.

More importantly, any proposed hybrid should show characters indicative of the influence of a second species. Yet all the features of the Rainham bird appear to fall within the described variation of Slaty-backed Gull.

The last word will come from the Rarities Committee and the Records Committee of the British Ornithologists' Union. They have covered similar ground before, and when accepting the first British record of Glaucous-winged Gull, the BOURC noted that "the bird did not show any features which were demonstrably those of a hybrid". This will perhaps be the final test for the Rainham gull.