I opened our front room curtains at about 7:30 am, having been slow to get up due to our 15-month old daughter Nula having had a restless night, resulting in me having none. However, two Yellow-browed Warblers chasing each other round the trees was enough to get me fired up.

I grabbed my bins and set off for my morning circuit in Halligarth. The previous fall of Yellow-broweds had cleared a couple of days before, so clearly there must have been new arrivals. A third followed by two Willow Warblers and two Garden Warblers was enough to prompt a text to Roger Riddington: “New birds in!” I wrote excitedly.

It was one of those flat, calm mornings that just feels 'rare' – that indescribable autumn atmosphere when you feel a monster rare is possible. The above tally was enough to convince me to carry on for an hour after breakfast and taking the bairns to school. After 12 more Yellow-browed Warblers an hour later, it was time to head home, as I had work to do.

A quick jaunt across Baltasound was necessary, and en route yet more ‘YBWs' caught my eye along the road to Ordaal. Two feisty 'Sibe' sprites were chasing each other round a roadside garden, visible from the car, so I stopped and pulled over. I’d tried to photograph one earlier with zero success so I thought I'd try again, and have a cheeky scan of the gardens, too.

Standing on the roadside, I'd been mimicking the warblers’ sweet call and they'd posed nicely. A few frames were in the bag, and I was feeling mildly pleased at my efforts when a bird flew up out of base of hedge just a couple of feet from me, flying straight across the garden and into a Sycamore about 10–15 m away.

As is often the way, I only got a three- or four-second glimpse as the bird flew across but I registered distinct white corners to outer tail, white flashes in the wing and scaly plumage: was it a White’s Thrush? No: even from such a brief view, I knew this bird was too small. Though I'd had my camera raised to photograph the warblers, I dropped it to raise my trusty Swarovski EL 10×42s, and am I glad I did! There, superbly scaly, 'supercilium-ed' and shadowed in the Sycamore canopy was a female Siberian Thrush. 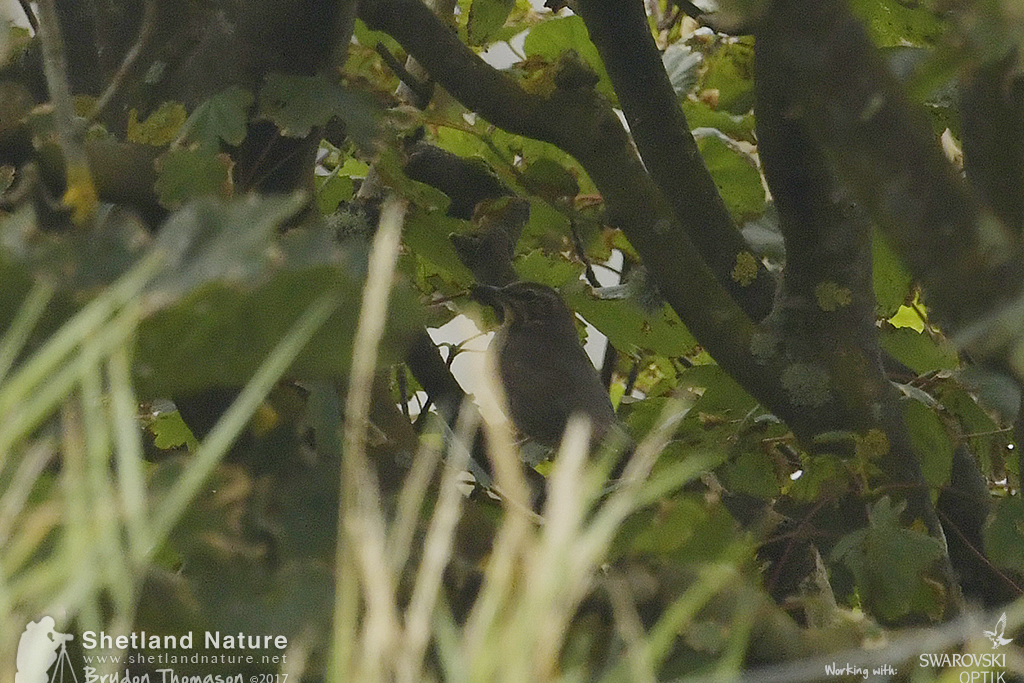 The Siberian Thrush giving its typical lurking view while ensconced in the gardens at Ordaal. Photo: Brydon Thomason.

When writing up a rarity, it's almost customary to describe the overriding surge of adrenalin coursing through the body but, strangely, that day I was actually rather 'together' and level headed (although my legs did feel somewhat weaker than normal). I think, because the identification was so strikingly obvious even on these first two glimpses, I had no doubt and this maybe helped me keep calm.

After perching for just a few seconds, it flew out of the garden, uttering a sweet but fairly clear tssi, rather like a cross between a Song Thrush and a Hawfinch. The wing-bars, white outer tips to the tail and black-and-white underwing pattern combined to create a truly sensational sight. Grabbing at my phone to get the news out and other birders on site was when reality started to hit me. Okay, there have already been five Siberian Thrushes on Shetland and the last was only a year ago on Unst,  but this is still a dream bird and one of the 'big guns’ from the east, and although we allow ourselves to dream of such things, I don't think I ever imagined finding one.

Perhaps predictably, the phone network was down so I had to leave the site and the bird to release the news. But then I thought: hang on, I've just found a ‘Sibe Thrush’ which I've only seen for a few seconds – if I leave it, I could lose it! I had another couple of flight views as it flew from garden to garden, but it was remarkably reluctant to show itself. After 10-15 minutes, it appeared to be settled between the two gardens so I ran up the road to use a landline or find a wi-fi signal.

Within five minutes, local birders started to arrive and, to everyone’s relief, the bird showed well enough, giving tantalising flight views. Given permission to enter its favoured garden by Mike Pennington, I was able to ‘encourage’ it out a couple of times. We all agreed that it was then best to leave the thrush in peace and by 2 pm, less than two hours after it was found, we had all left. To my knowledge everyone arriving over the course of that afternoon managed to see it, too, and thankfully everyone behaved well.

The initial images captured the overall experience quite realistically, especially Rebecca Nason's flight shot, though it was surprising just how good flight views were through bins. Rebecca and I both mocked our own efforts from photographers’ perspectives but celebrated them from birding ones!

Having refrained from twitching the Uyeasound bird last year and not having seen any of the previous indivduals, this female was all the more tremendous. I had previously seen the species in China about 10 years ago and could well remember its frustratingly elusive nature, and this bird certainly lived up to that impression. Over the course of the two hours I was there, I only saw it twice actually perched in view, and not once in full view on the ground.

If accepted this will be the 12th record for Britain.