As Assistant Warden at Fair Isle Bird Observatory during spring and autumn migration, part of my duties is to count all migrant bird species in certain sections of the island each day. Fair Isle is divided into three sections: north, south-east and south-west are split between three wardens and surveyed on a clockwise rotation.

As I performed the south-west census on 5 October, the weather was very promising, with a strong south-easterly breeze. Having already checked Setter Croft and Pund, picking up a few migrants en route such as Siberian Chiffchaff, Yellow-browed Warbler, Blackcap and several Goldcrests, I decided to check the west cliffs, which I hoped would be more sheltered.

On passing the tip of Hoini, I reached a promising grassy slope down to the sea as three Song Thrushes flew out just below me calling. Then a very dark thrush of a similar size followed them. I got my bins on it immediately, and saw it flip sideways. It was completely dark blue with a blue stripe leading up the underwing, bordered by gleaming broad white stripes. It then disappeared south round the cliff edge. It had been on view for literally a few seconds, but I had absolutely no doubt that it was a first-winter male Siberian Thrush.

Now the panicked phone calls started, as I tried to relocate the bird in the next geo to the south. On arrival I could hear the Song Thrushes calling again, only to see the thrush again disappear over a ridge and towards the very high southern cliffs of Hoini.

The next half an hour was a bit of a blur, as all the birders on the Island scoured the west cliffs. Then Fred Fearn relocated the bird in Steensi Geo, but sadly it vanished again without any others seeing it.

The area in which Lee discovered the Siberian Thrush at Hoini, 5 October 2015 (Photo: Lee Gregory)

Even having lost the Siberian Thrush it was an amazing day on the isle with migrants everywhere, including three Richard's Pipits, four Glossy Ibises, Red-breasted Flycatcher, 15 Yellow-browed Warblers and 653 Redwing — a real spectacle!

If accepted, this will be the second Fair Isle record, following a male in 2008, found by then FIBO Warden Deryk Shaw. 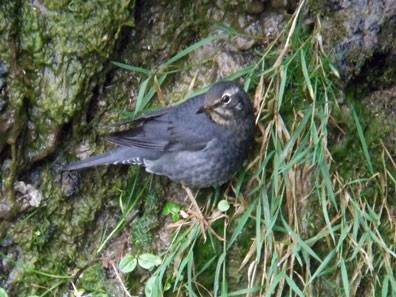