After a brief autumn visit in 2010, I've been living and working full time, with my wife Fleur, at North Ronaldsay Bird Observatory for the past three years. Like the fortunate few who've shared a job similar to mine since its establishment in 1987, I've been lucky enough to stumble upon some fantastic birds during this time. Among many highlights, the personal headline-makers include Lesser Kestrel, Rufous-tailed Robin (OK, so I picked that up dead) and of course the Walrus (OK, admittedly not a bird!) but, on Sunday 17th November, things went up another notch.

Winter comes early up here and, after a long, hard season, my workload usually consists of paperwork and writing the year's bird report in November. However, I always try to get outside most days, despite the often inclement weather. After six hours of rugby (good job Wales!) and X Factor on a consistently rainy mid-November Saturday, I was left with itchy feet. With a reasonable forecast predicted for the following morning, I decided I'd give the north end a punt.

I'd been out for about an hour and was routinely counting the flocks of gulls and waders feeding in the flooded fields just south of Bewan Loch when a white supercilium caught my eye. "Spotted Redshank or dowitcher," I speculatively mumbled to myself but, as the bird was largely obscured, I carried on counting the commoner species. Returning to it a few moments later I could now see its entire head. It was a dowitcher! I dropped to my knees, commando-style, and crawled to the nearest bit of wall to rest my telescope on and obtain a better look. However, I'd forgotten about the sheep, and managed to disturb a large group — within seconds of focusing my telescope, all the waders were off! I cursed, but a short time later refound the bird with Redshanks on Bewan Loch. No doubt a dowitcher, but which one? With the season over, the other Observatory staff were either off-island at the BTO Scottish ringing conference or had finished their contracts — as a result, only resident birder Pete Donnelly and I remained, though he was unavailable for well over an hour. I was on my own with this one. 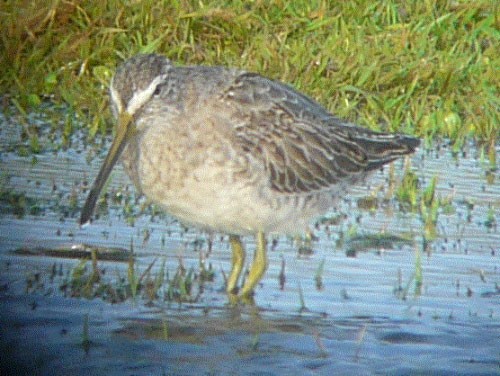 After an agonizing wait, the bird returned to the flooded fields and, using the walls for cover, I was able to 'scope the bird at a decent range and take in some features. It appeared to be a first-winter with an obvious contrast between the greyer, moulted mantle and upper areas of the wing and some browner-looking juvenile areas. I couldn't remember all the separating features but focussed in on the tertials. The two shorter feathers were dark-centred with a distinctive, uneven, grey notched patterning around them but the one underneath lacked this and had an unmarked golden-brown edge. As they matched the colour of the mantle I interpreted these upper, patterned tertials to be moulted first-winter feathers, and took the contrasting longer tertial to be juvenile. In doing so I incorrectly identified the bird in the first instance as a Long-billed Dowitcher. The loral angle also appeared fairly straight, almost in a continuous line with the bill — I knew from memory that this was supposed to be steeper in Short-billed Dowitcher, though of course it was difficult to judge with changes in posture. 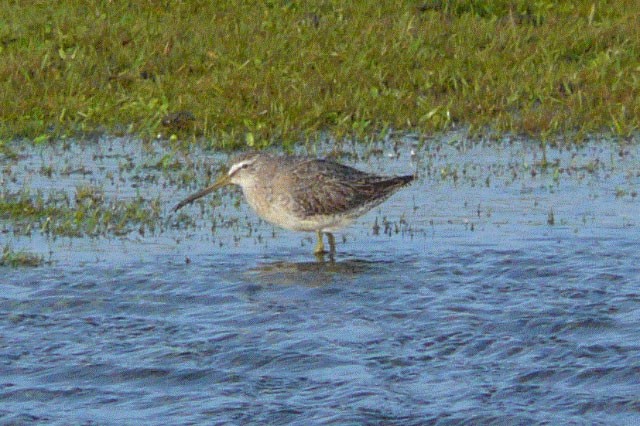 Photographs proved crucial in the identification of this, the fourth British record, but the first in this plumage. In this image, the bill can be judged to be one-and-a-half times the length of the head, drooping towards the tip. The sparse markings on the underparts can also be seen well, with narrow barring on the flanks, some spotting on the sides of the breast, a hint of a peachy-buff breast-band and an extensive pale throat. The primary projection extends beyond the tertials, with these extending slightly beyond the tail. The very white supercilium is obvious, extending up, over and a fair distance beyond the eye, framing a contrasting dark cap. (Photo: Mark Warren)

Pete arrived and we discussed the features, agreeing that Long-billed seemed most likely, but I knew these two were tricky to separate. With over 100 unidentified dowitchers residing in the BBRC archives, and no literature to hand, I was taking no chances, rattling off plenty of photos over the next couple of hours. Later that day, the wind having dropped considerably, I opened the mist-nets for the last couple of hours of daylight and between net-rounds I began checking through my photos. It just didn't look right to me. Getting the wing rule out to measure the head-to-bill ratio, I found it to be one-and-a-half times the length of the head. I knew Long-billed should have had a two-to-one ratio. With doubts creeping in, the nets were soon closed and I hit the books! 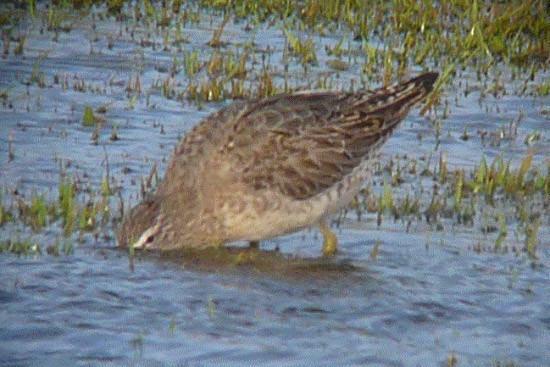 The crucial patterning in the wing can be seen here, including the juvenile tertials with their notched pattern and also a number of 'tiger-striped' retained juvenile coverts. Though it retained a few juvenile feathers, the moulted grey scapulars show prominent white feather fringes, which is another pointer towards Short-billed. Some brown streaking is apparent in the crown, and the bird's primary projection beyond the tertials is again apparent (Photo: Mark Warren). 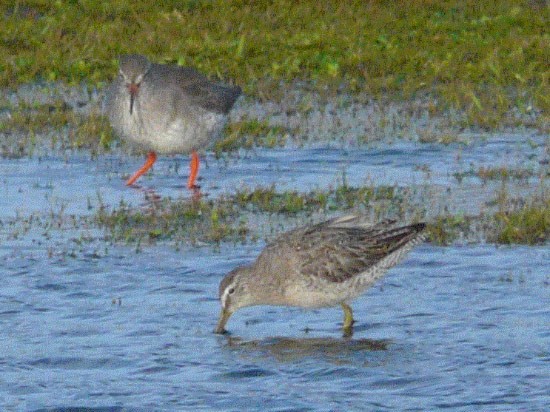 In addition to the features mentioned previously, this photo shows that the white bars within the tail can be seen to be equal to, or possibly even broader than the dark bars (Photo: Mark Warren)

Back at the Observatory several cups of tea went cold as I compared the features in my images to those on the internet and relevant field guides; as I did so the panic levels began to rise! It had a startlingly white supercilium that extended well beyond the eye, framing a cap that was much darker than the upperparts. The bill was short and slightly de-curved at the tip. The primaries projected beyond the tertials and seemed to extend slightly beyond the tail. The underparts were sparsely marked with narrow, fine grey barring on the flanks and subtle spotting on the sides of the breast. The dark bars through the tail were narrow, roughly the same width as the white bars, and perhaps most importantly it had a few retained 'tiger-striped' coverts! The bird just looked wrong for a Long-billed Dowitcher, but I was still confused by the whitish, rather than golden-brown, patterning to the tertials — had I aged the bird wrongly?

I needed some help, and thanks must go to Rael Butcher, Orkbird founder Paul Higson and BirdGuides' Josh Jones for early correspondence as to the bird's identity. It proved that the bird was indeed a first-winter Short-billed Dowitcher — only the fourth British record. I now believe the whitish patterning of the tertials to be down to wear and bleaching and, with the other three records having all been juveniles in September, this first-winter bird has definitely proved educational. I couldn't find it the next day but thankfully it was back at Bewan early on 19th, and was even heard calling regularly! I'd recorded the calls of both species onto my phone overnight and several times I heard the treble note 'tu-du-leu' — best described as a cross between a Lesser Yellowlegs and a Turnstone. Until now I couldn't help but be slightly disappointed that I hadn't got this right first time around but now, with it correctly identified and calling, I could really enjoy the bird. 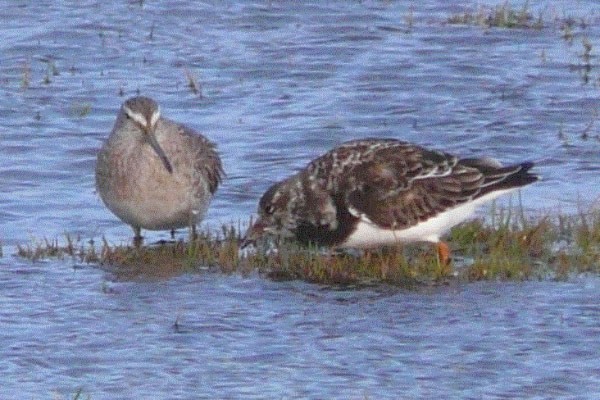 The very white supercilium tapers inwards down the crown can be seen in all the head-on shots, and is typical of Short-billed Dowitcher — in Long-billed this runs straight. The crown looks especially dark here and the neat spotting on the breast as well as the bird's small size — in direct comparison with the Turnstone — can also be appreciated (Photo: Mark Warren) 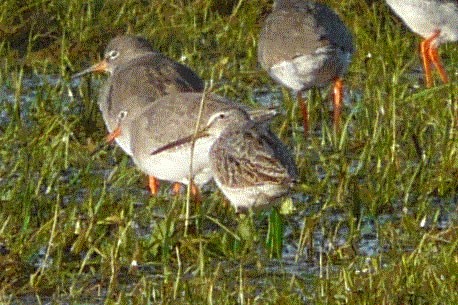 In this pose the loral angle appears much steeper, whereas in most of the images this appears fairly straight. The position of the eye, being well above the bill, is also significant (Photo: Mark Warren)

At the time of writing, the bird hasn't been seen for several days but I'm the only birder out looking at this time of year, so it may still be about. It's staggering to think that such a rarity has only been seen by eight birders, including three who twitched it from Mainland Orkney. It's been a good year on North Ronaldsay — even Orkney's first Brown Shrike, present in September, doesn't top the bill. There has been a strong supporting cast of rarities viewable over the last 12 months, including Red-flanked Bluetail, River, Paddyfield and Blyth's Reed Warblers, Pacific Golden Plover, Lesser Yellowlegs, Blue-winged Teal and so much more besides. Yet the island still remains so underwatched and, with such a diverse range of habitats, any time of year can be good. The Observatory remains open during the winter months and we are now taking bookings for 2014. But don't forget to keep checking the Observatory website, because 2013's not over just yet... 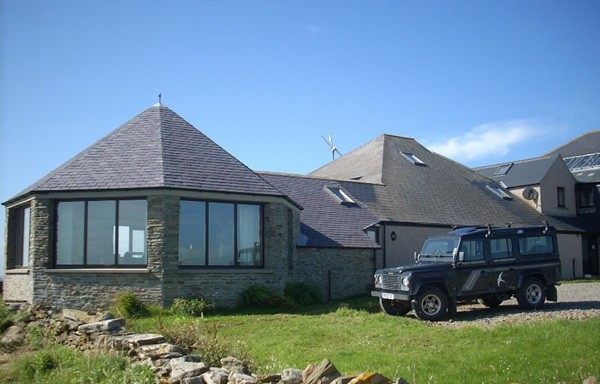 The Bird Observatory and its bar — a great place to celebrate many a fine day's birding! (Photo: Mark Warren).