Monday 21 June started with online meetings and ended with me watching Long-eared Owl chicks just before midnight, confirming the first breeding record for the Belmullet Peninsula in Co Mayo. In between, however, I wasn't expecting to find a Red-winged Blackbird!

I arrived at BirdWatch Ireland's Annagh Marsh reserve, on the Belmullet Peninsula, around 3 pm to carry out my regular monitoring walk. I hadn't ventured very far when, out of the corner of my eye, I noticed a blackbird-like bird flying over the top of some club-rush and pitching down into a patch of bulrush, some 100 m away. Although having only seen it briefly with the naked eye, there was something odd about it that didn't seem right for a Blackbird and I also couldn't recall having seen a Blackbird in the marsh before, so I decided to change course and check it out.

On approaching the patch of bulrush, the blackbird lifted off the ground and perched on a dead stem 20 m away – even with the naked eye it was clearly not a Blackbird and through binoculars the orangey-red lesser and median coverts stood out like a beacon against the black plumage: I was looking at a male Red-winged Blackbird! 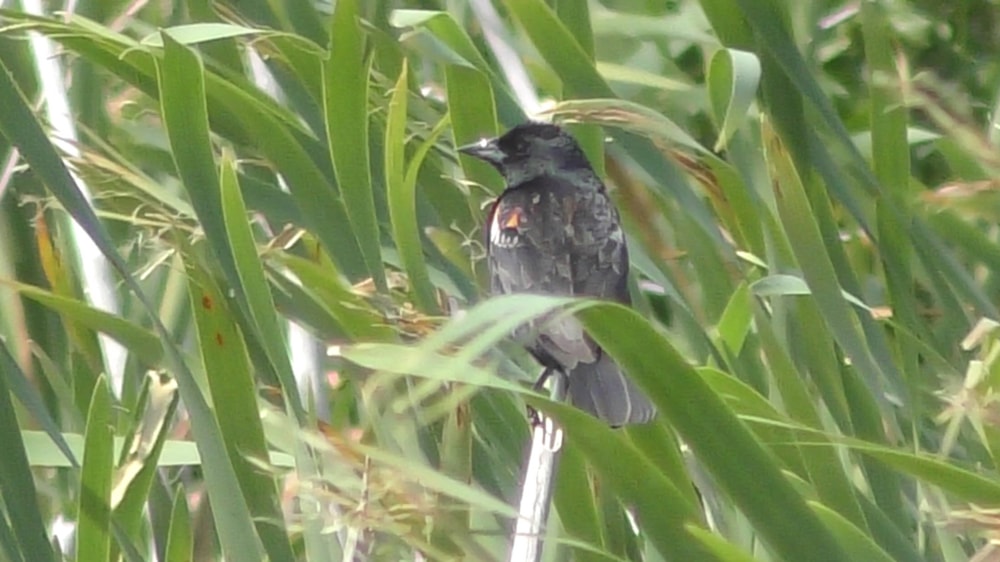 The Red-winged Blackbird was mobile and could be very tricky to see, but there was little mistaking its identity (Dave Suddaby).

With an increasing adrenalin rush I stepped back a little, as I did so the bird flew over my head and I noted its unusual shape, a combination of broad wings and a broad, thick-looking tail, with a distinctive floppy, undulating flight – unlike that of most European birds. While in flight it was calling regularly with a throaty coarse chuck. It headed up the road and over the dunes with me in pursuit and, after a short while, I found it feeding around some grazing cattle. Here I sat and watched it, noting its distinctive deep-based, pointed bill with straight-edged mandibles, along with pale 'ghosting' to some mantle and underpart feathers, although the striking feature was the coverts. The lesser coverts were an orange-red colour, while the median coverts were yellowish – particularly the outer coverts whereas the four inner coverts were black centred and edged pale yellow to greyish indicating that this was a second-calendar-year male. The shape of the tail feathers also indicated this age.

After watching it here for some 20 minutes or so it flew, unprovoked, back towards the marsh where it flew around landing on fence posts, from which it would drop down and feed within areas of club-rush.

Eventually, however, it landed back within the original patch of bulrush. Over an hour had now passed, and with the bird seemingly settled I headed off towards Belmullet to get some mobile phone reception. At this stage I spoke with BirdWatch Ireland colleagues to discuss the situation and agree on releasing the news. This was duly done with a message posted on the national bird news WhatsApp group. 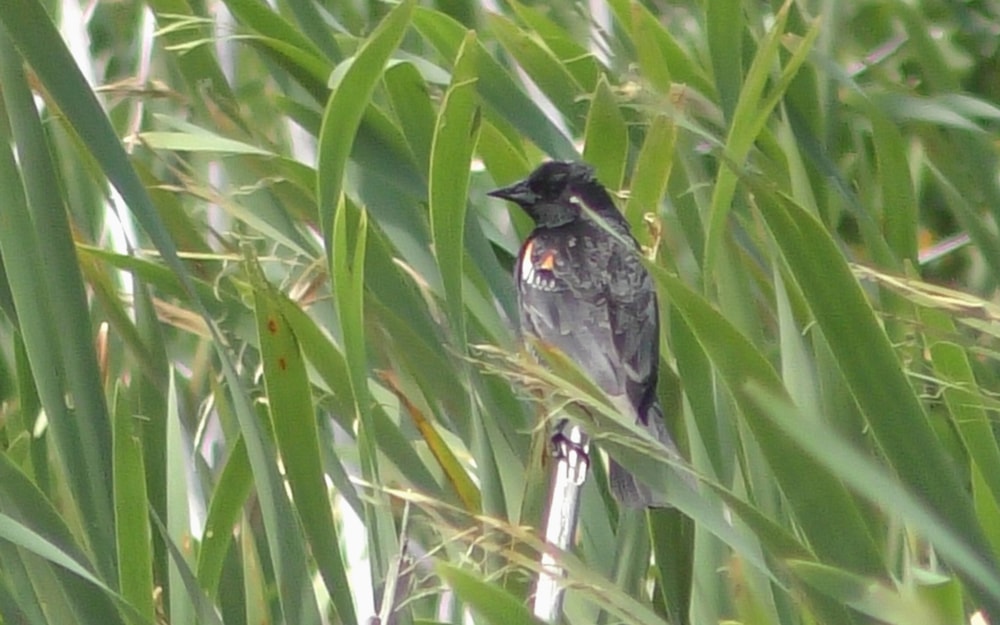 The bird favoured a particular clump of bullrushes throughout the afternoon and evening of 21 June, but was only seen very briefly the next day (Dave Suddaby).

I then took the opportunity to get some food and drink, and headed back to the reserve around 6 pm. While parked at the reserve gate, eating my sandwich, I picked the bird up flying over the dunes from the direction of the cattle. It landed again within the patch of bulrush, perching out in the open for a few minutes before it then 'walked' down the stem onto the ground and out of sight.

It was now around 6.30 pm. Knowing that it would be another hour or so before the first birders turned up, I headed off to do some maintenance work just along the road before returning at around 7.30 pm. The first birders arrived shortly after and, by 9 pm, a small group of 10 birders were standing scanning over the marsh when the blackbird appeared, much to the relief of those present, from the same spot it had dropped into three hours earlier!

After a few minutes the bird then flew, and after doing a couple of circuits of the marsh area it was lost to view behind the dunes. Despite searching, that was it, with only two very brief views the next day and nothing thereafter.

Prior to finding this bird at Annagh Marsh, BirdWatch Ireland's Niall Hatch received a brief report and some photographs on 16 June of an unusual bird seen at a bird table in a garden in Castleconnor, Co Sligo, on 11 June; the bird was readily identified as a male Red-winged Blackbird! Comparing those photographs, the shape and colour of the inner median coverts and some ghosting pale edges to a couple of the upperpart feathers indicate that this is the same bird –  a straight-line distance of around 65 km between sites. 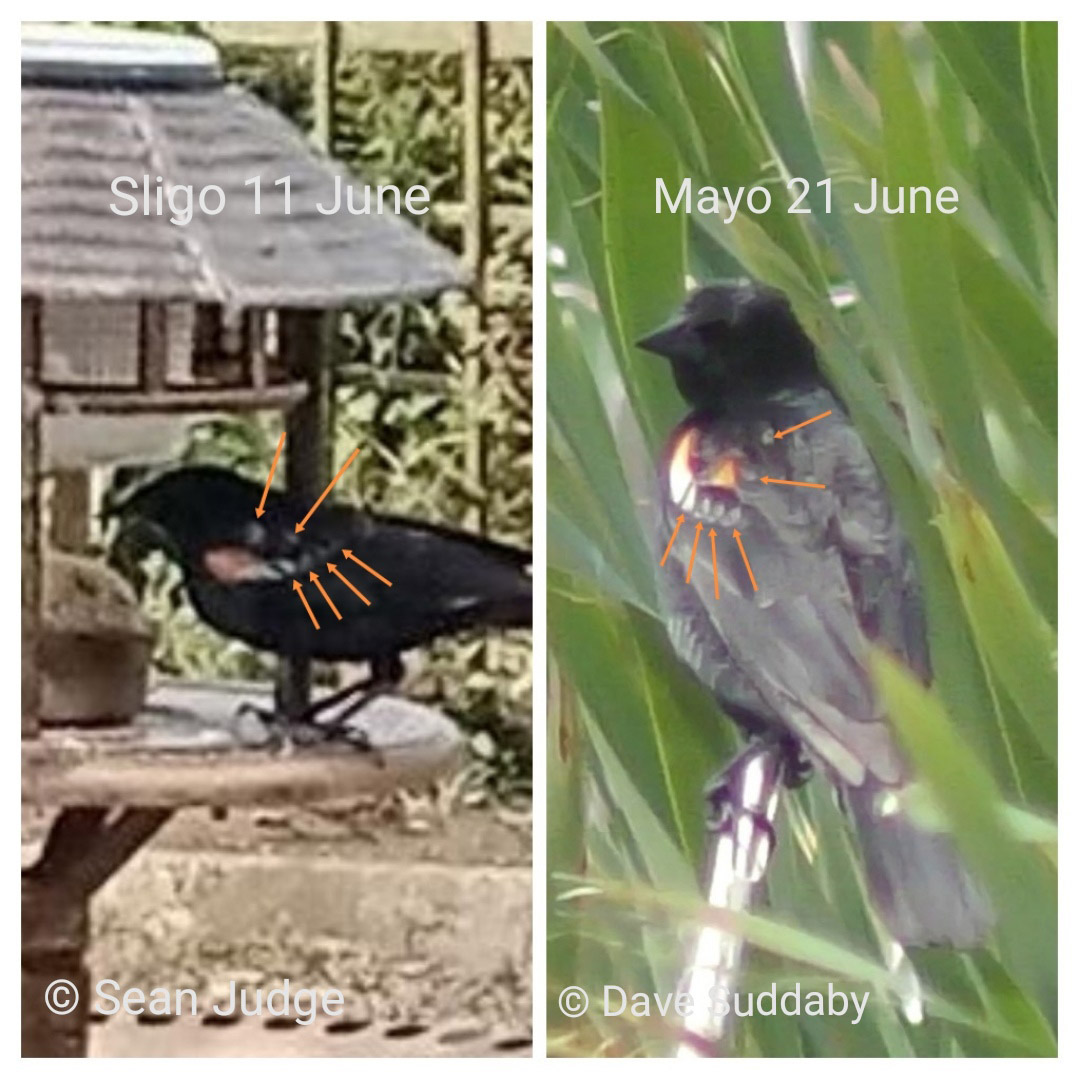 If accepted this will constitute the first Irish record and the second for the Western Palearctic of this North American species, following the record of a female on North Ronaldsay, Orkney, from 29 April-14 May 2017 (more on that bird here).