I had some hope that a front of rain would bring a passage of Common Swifts at Bempton Cliffs on the afternoon of Monday 27 June. Sadly, it didn't happen. After a while I decided to do my routine stroll along the clifftop path towards Staple Newk, where I knew the Black-browed Albatross was sitting on the cliffs but out of sight.

The air smelt fresh after the rain but the stark sunlight was a little too much. The swift no-show was disappointing and I had no feeling of seeing anything more than the usual. Only 100 m short of Staple Newk viewpoint I paused to check my phone. I then saw something flick up onto the top wire of the cliff fence.

The naked-eye view from 20 m away caused no alarm. A medium-sized passerine with a white front and perhaps a dark cap or hood. The sunlight cast shadows on the bird as I raised my bins. Then there was utter shock! I threw my phone and reading glasses to the ground, took a longer look, established what it was, and quickly rushed off a few record shots just in case it disappeared (the first photo was at 2.48 pm). 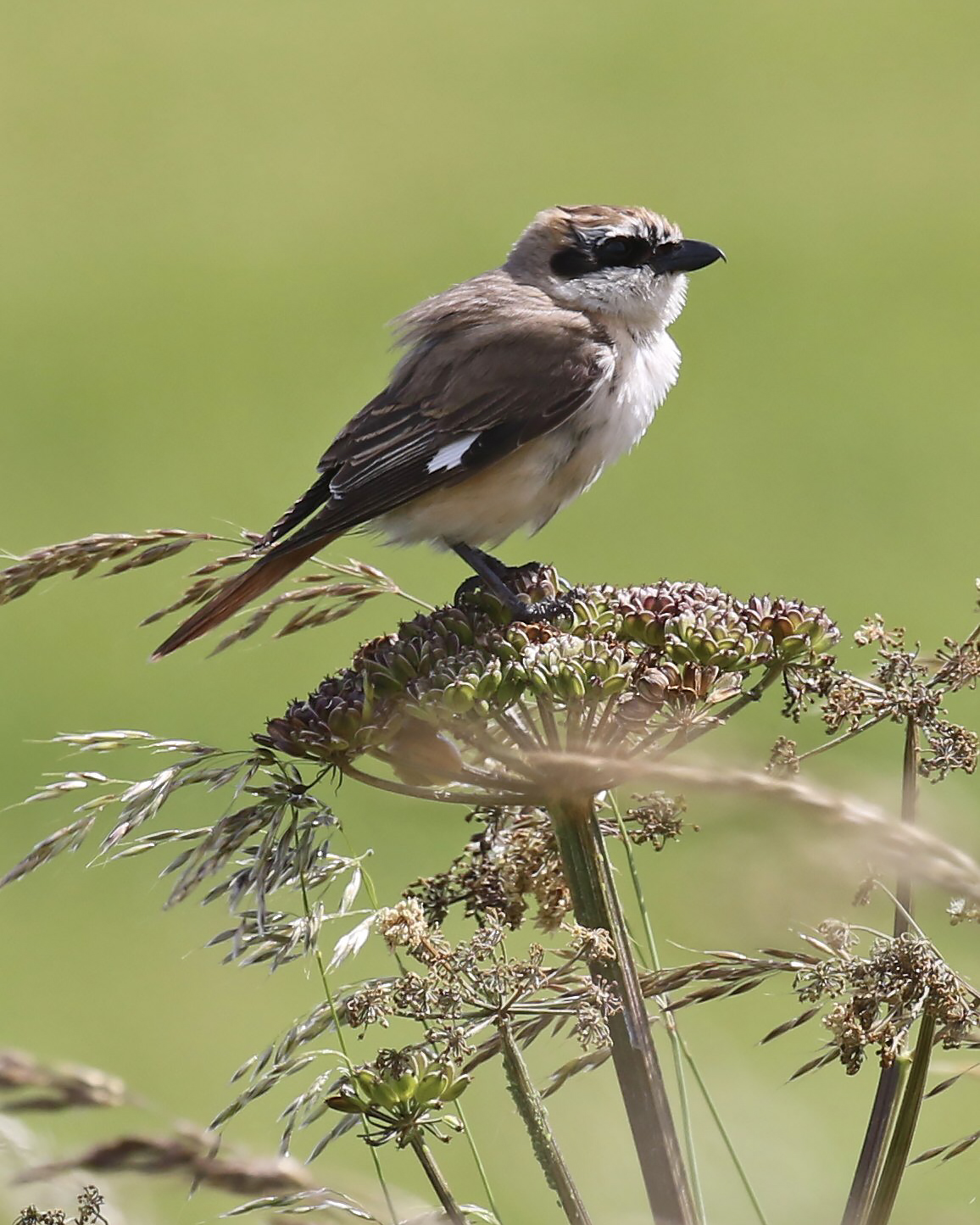 A wet crown and forehead perhaps owed itself to inclement weather offshore as the bird arrived (Trevor Charlton).

On first glance through bins I eliminated Brown Shrike (of which I had previous experience in Britain). This bird was daintier and shorter-tailed. It lacked the rusty tones of Brown Shrike and showed obvious white-based outer primary notch. However, the colour tone of the wings and upperparts did show slight rusty tones which led me away from Isabelline Shrike (of which my previous experience was in East Africa in winter). There was a hint of gingery tones on the rear cap, difficult to see well owing to a wet crown and forehead. The rear supercilium was deeper than that forward of the eye and very white, as was the throat. The peachy tone to the flanks was obvious and seemed to fade paler towards the breast sides. The tail was seen to be very rusty when perched, but more especially when it flew (twice) and appeared to have a darkening towards its tip. These general colour tones suggested Red-tailed rather than Isabelline. My opinion was that the colour tones were strongly suggestive of phoenicuroides as I would have expected an overall sandier diluted ground colour overall in a summer male isabellinus.

The bird took flight twice after some perched photos were obtained. It flew about 100 m to the south-east and was lost over a brow of grassland. I ran the path to relocate. For much of this time I was distracted by my phone having alerted local birders. Messages and calls – I was in panic mode. I met two visitors (Cathy and James Clements) with little knowledge and no bins, but both had cameras. I asked for help to relocate. Over the brow of the grass ridge the bird was not there. I knew the best chance was the next field less than 50 m away. To my relief, I saw it immediately in a rough grass fence line. The two others saw it through cameras only and obtained a few poor photos. The shrike then few into the field perching atop some docks, then to another dock 20 m further away. I got my last photo at 3 pm. At that point checked images on my camera to ensure decent exposure, at which point it flew so I missed it go and failed to relocate it. Soon after locals started to arrive. We searched the area up to 9 pm, failed to refind the bird and left the site. We reviewed my images in detail and concluded it was a Red-tailed Shrike. I was gutted no one else got to see it.

The following day I was on the reserve very early. I covered a wide area and failed. Only one other birder was looking properly. We discussed a strategy to search a wider area a short distance inland. Blakey Lane was a favourite and two guys did it independently. The first guy failed. The second guy with his wife (Ian and Karen Howard) walked the whole length of the lane and failed. But as they walked back, they found the bird! I was truly elated.

Incidentally, I measured accurately on Google Maps the distance between the sitting albatross and the shrike: 98 m. The shrike moved closer when it went to the rank grass area – just 84 m! Who would have thought that …