Finding a rare bird is part of what drives many patch birders, and the hope of finding something good — though rarely realised — is always in the back of my mind whenever I visit my patch at Collingham Pits, near Newark (Notts). I've been hitting the site quite hard this year, as part of the Patchwork Challenge, and had been most pleased with a Pectoral Sandpiper earlier in the autumn. However, my visit on 9th November was, for various reasons, my first in two weeks. I was looking forward to seeing what had changed since my last visit, but wasn't expecting to see much of note; wader passage had long finished, and wildfowl numbers had been unspectacular of late. Thoughts of a rare passerine certainly didn't cross my mind... 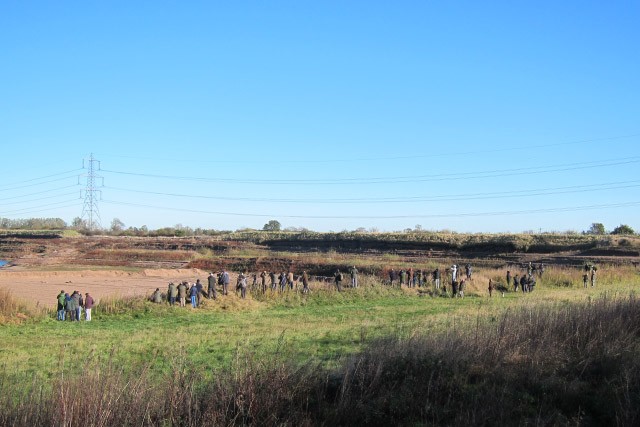 I arrived on site at about 10am and began by scanning Ferry Lane Lake, which is the main part of the gravel pit complex. Having examined the wildfowl, I had a look through the Linnets and Meadow Pipits that were moving around on the bare gravel, hoping for a Twite or a Rock Pipit. Scanning along a line of Linnets sitting up on a low gravel bund, the final bird instantly caught my eye. It was sitting front on, was small (not much bigger than the nearest Linnet), and looked like a wheatear. Worryingly, it had a very plainly marked head, and a brown, slightly ochreous, band across its upper breast. It bobbed a couple of times, pumping its tail, and then flicked over the back of the bund, flashing a wheatear-patterned tail. My heart rate quickened — I'd only seen it for a few seconds, but this looked good!

The bird popped up further along the bund 10 minutes or so later, and gave an equally brief, front-on view, but it still looked promising; it was a female or immature-type, and definitely wasn't a Northern Wheatear! It then didn't show for another 30–40 minutes before popping up again — standing sideways on, it looked quite long-tailed and showed a brownish-grey mantle. I began to panic — this was surely either an Eastern Black-eared or a Pied Wheatear! I knew the latter was much more likely at this time of year, but also that the two can be very tricky to separate in this plumage. Foolishly, instead of taking a photo when I had this opportunity, I decided I needed back-up and started making calls. I got hold of local birder Carl Cornish (who'd just arrived in Sherwood Forest for a relaxed morning's birding), and he came straight back over to Collingham having been convinced by my excited tone. Frustratingly, the bird had vanished just after our phone call and, when Carl arrived, we spent a further two hours looking for it with no success. By now I had to leave to play hockey. I was already very late. I was furious with myself on the drive down to Leicester — my views, which had not exactly been at close range (c.150 metres) had amounted to not much more than a few seconds; I'd failed to obtain any photos, and all I had to show for myself was a few scribbled notes.

Thank goodness then, that John Ellis, another local birder and frequent visitor to Collingham, had seen a missed call from me, called back, and then gone to look for the bird in the afternoon. Checking my phone in the changing rooms after hockey, I was elated to see that he had relocated the bird and that, although it was still proving elusive, Carl had managed to get some phone-scoped photos — one of which he'd texted through. Arriving home, I phoned Carl and John for their thoughts; the photos were then emailed to various people, and consensus from all quarters was that it looked good for a Pied. With rumours beginning to leak out on Facebook, I decided to put news of the bird out. By now, of course, it was dark, and I didn't sleep too well! 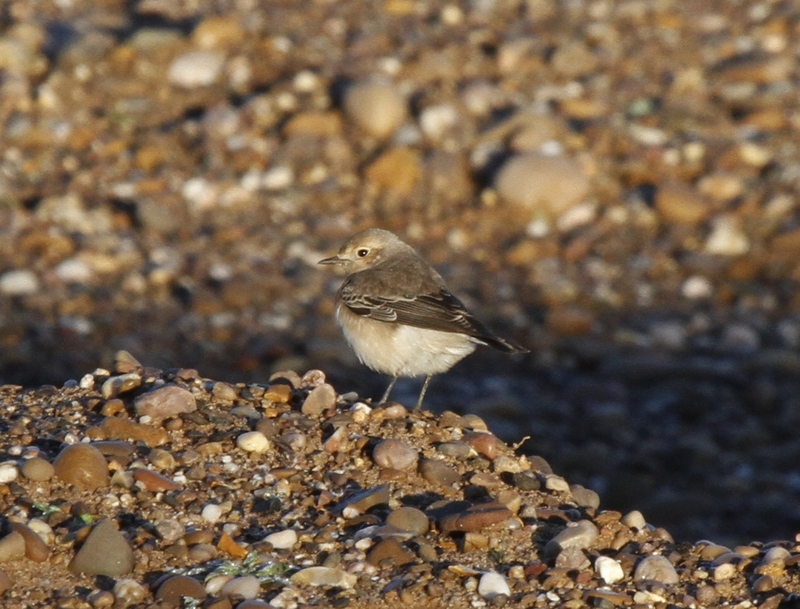 Sunday morning saw me arrive on site at 06:45. There were already several people present, and it was bitterly cold. It had been a clear night, and I was feeling rather nervous that the bird may have moved on. Gradually the sun rose, and light crept across the quarry floor. But soon, relief: the bird was located on the gravel bund, in exactly the same place where I had last seen it the previous day! Silence descended over the growing crowd. It was clearly warming itself up in the sun, and sat more-or-less motionless for several minutes — why hadn't it behaved like this on the Saturday? As the sun rose it became more active, moving along the bund and then more widely while several gaggles of Nottinghamshire birders discussed the bird's identity (making me feel less guilty about not nailing the ID initially). Personally, I had seen what I needed to see: a Pied Wheatear it was! 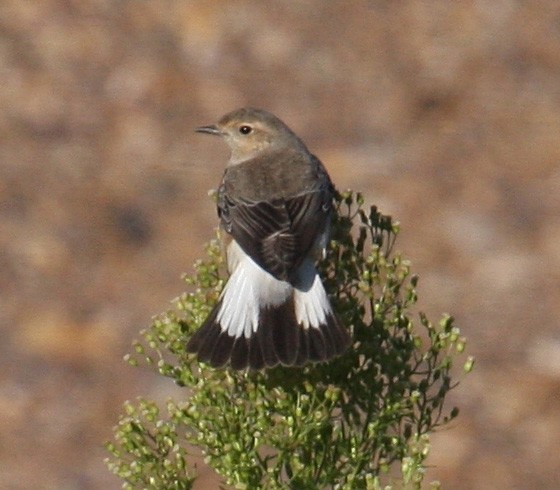 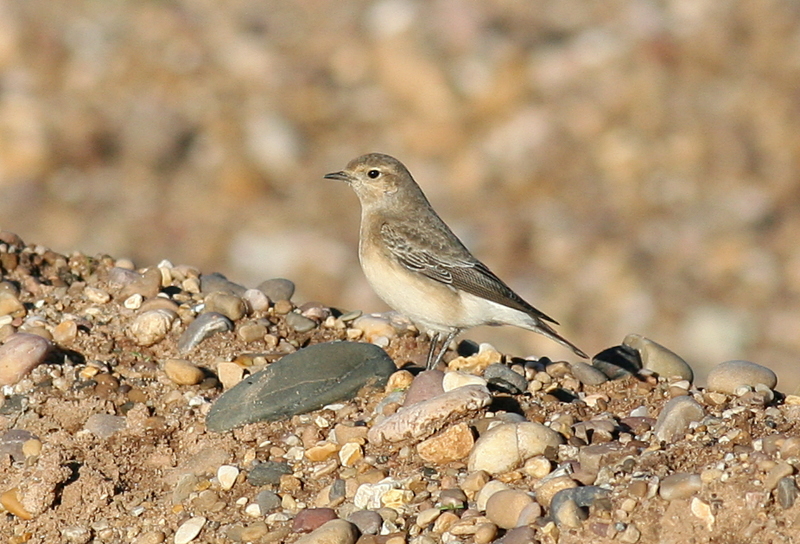 Over the next couple of hours it showed extremely well on occasion, catching several large caterpillars and even moving along the bank at the front of the pit right in front of the crowd, allowing for some super photos to be taken. In the warm morning light, its upperparts didn't look quite as dark as I'd perhaps have expected (and were certainly rather less dark than Carl's initial photos had suggested), but they were cold toned and showed subtle pale fringes at close range, a feature which I hadn't been able to see yesterday. The bird continued to perform for the rest of the day and was well twitched, but there was no sign of it the following morning, it having presumably departed overnight. 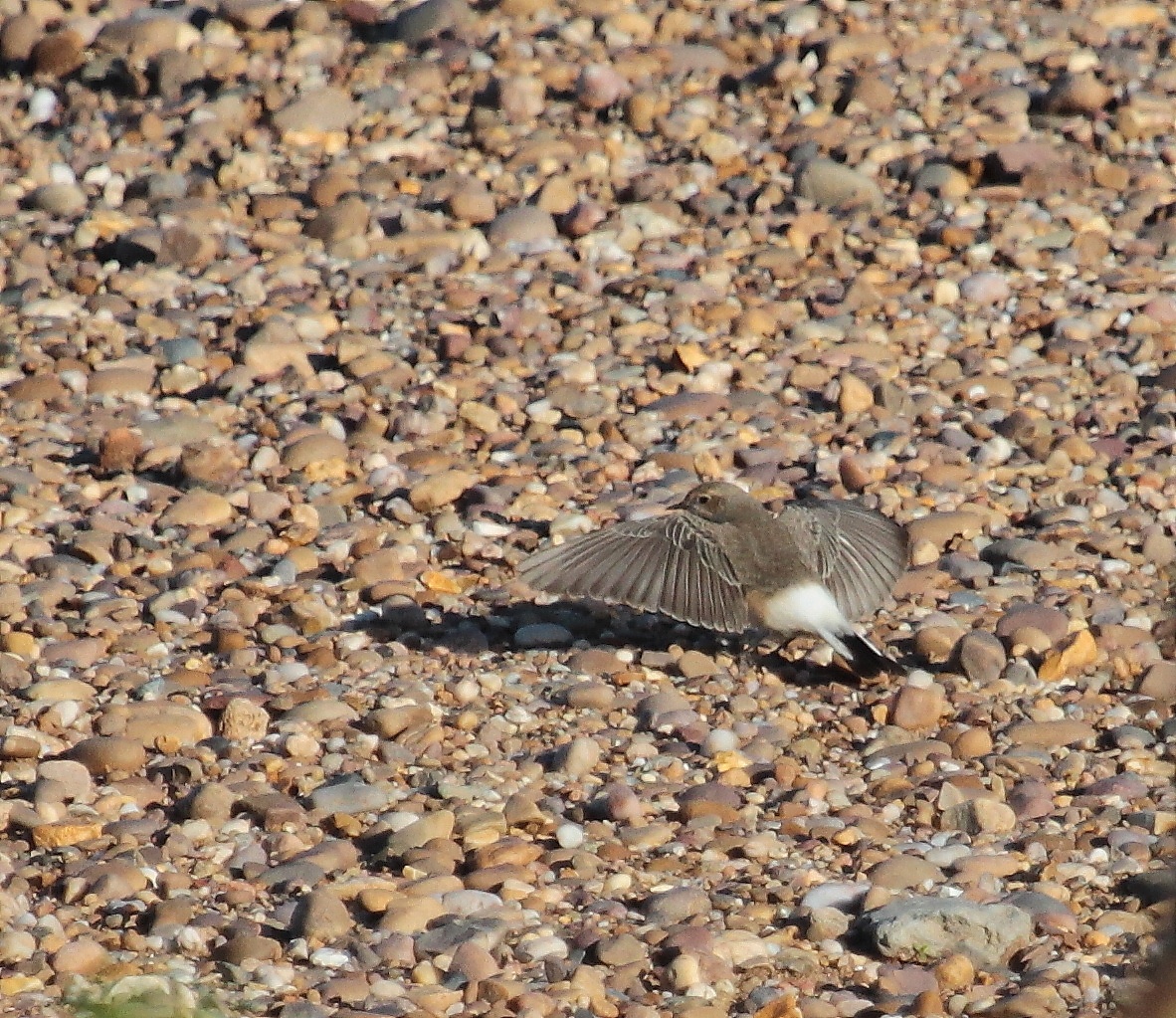 Perhaps unsurprisingly, this bird is the first Pied Wheatear for Nottinghamshire. It also potentially the first-ever inland-county record, as a multi-observed male at Bredon Hill (Worcs) on 5th November 2005 was never formally accepted. It goes to show that, even in November and even at inland sites, rare and totally unexpected birds are out there to be found. So, the moral is to make sure that you keep checking your patch!