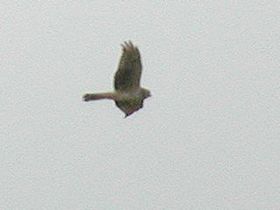 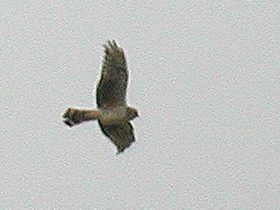 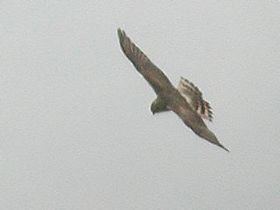 Every year, for almost the last 10 years, a group of birders from northwest Kent have stayed at the Dungeness Bird Observatory in Kent for the duration of the May Day Bank Holiday period. It is always a good social and birding event and it is sometimes complemented by the occasional rarity.

Friday 3rd May had been quite good for migrants but Saturday had been dire, with the highlight being the annual trip to the Ghandi Restaurant in the evening!

Sunday 5th May looked as though it was going to be pretty much the same with a cold northerly breeze making both seawatching and looking for passerines rather futile. So it was with some relief that a Citrine/Yellow-type Wagtail had been found at Hawthorn Corner on Walland Marshes late morning, as at least we now had something to look at and discuss.

After eventually relocating and studying the bird we were quite sure that it wasn't a Citrine Wagtail, so we felt there was no need to broadcast the news further. However, the old grapevine had worked well and a few birders had travelled to the site just in case.

Colin Shields arrived at the site at 2.30pm and as he left his car to join the twenty or so birders present, he noticed a ringtail harrier flying towards us.

I was standing 30 metres away with my brother Marcus when the shout of 'Harrier' went up. I quickly located the bird with my binoculars and then switched to my 'scope. It was by now only 300 metres or so away from us and flying at an angle which would have taken it to within a few metres of us! At the last second it must have noticed the crowd and it banked 90 degrees to the left, flew 50 metres away from us, and then swung back 90 degrees to the right and continued along on its original line. This then gave me an excellent side profile view. I could clearly see three long primary fingers and a much shorter P10 on both wings, thus immediately eliminating Hen Harrier Circus cyaneus.

Unfortunately, like many of the birders present, I then assumed that the bird must be a Montagu's Harrier Circus pygargus; the thinking was, 'It's Dungeness, it's May, it's not a Hen Harrier, therefore it must be a Montagu's.' However, I carried on noting as many features as possible and I quickly became aware of a number of features inconsistent with it being a Montagu's Harrier - in particular a clear, pale collar and dark secondaries in the underwing.

At its closest it must only have been 50+ metres away from most of us, at a height ranging from 3m to 20m. The bird then flew behind the crowd and gradually circled up to a height of about 70m at which point Andy Wraithmell managed to obtain video footage of the bird. The bird then continued in a northwesterly direction. The bird was on view for a total of 5-10 minutes.

Marcus confirmed that he had managed to take three photographs of the bird. I then left him so that he could continue to photograph the wagtail whilst I rejoined the rest of the crowd. Fortunately two of the birders present, Ray Turley and John Cantelo, had quickly suspected that the bird was, in fact, a Pallid Harrier Circus macrourus and were discussing the ID features of this bird.

Another birder who had been watching the bird away from the rest of the crowd had already phoned the bird into the information services as a Montagu's Harrier. He wasn't surprised when we called him later to inform him that the bird was in fact a Pallid Harrier as he had already had similar concerns. He added that he phoned it in immediately as a Monty's to alert any birders in the near vicinity.

There was an air of excitement as the rest of us quickly realised the enormity of our sighting and we decided to return to the Observatory so that we could look at the photographs and the video footage.

Ten of us arrived back at the observatory at about 4pm and we huddled around the televsion in the Observatory common room. Marcus then downloaded each of the three images in turn from his digital camera to the television. We were now able to confirm features that we had seen in the field and also other more subtle ones.

This bird turned up after a spell of easterlies and coincided with what is perhaps the largest influx of Pallid Harriers ever recorded during spring in Europe.

Additional north European records at this time included: France: a total of at least 6 birds in March and April; Denmark: by 14th May, around 8 birds were recorded at Skagen, with a couple of birds elsewhere; The Netherlands: a single bird was seen in the north at the end of April; Sweden: reports between 20th April and 5th May ran well into double figures and involved at least three 2nd-calendar year birds, two adult males and one adult female - a little more than usual, as most spring records are usually in late May and early June. In addition, in Italy at least 85 were noted by the start of May, the best spring passage ever. There had only been 10 accepted British records by the end of 2000 and two others were seen in 2001, though there have been no truly twitchable mainland records.

If you, or someone that you know, chances upon a top-class rarity, we'd love to feature the write-up (and sketches or photos). Please send it to us at sightings@birdguides.com.