I walk the same birding route most mornings from our house in Castletown to Dunnet Bay and around the woods. It had been very productive prior to 10 November, with a Grey Phalarope and Leach's Storm Petrel a few days previously and the week before I was ecstatic with my first patch Great Spotted Woodpecker.

It was the first calm day for a while on 10th, and it was clear a few more finches had arrived, mostly Eurasian Siskins and the odd Brambling. As I was leaving the far end of the patch, a calling Lapland Bunting flew over – only my second here this year. I remember Marc Hughes talking about patchbirding when I was younger, saying something along the lines of 'you need 20 patch visits to get a good bird or have an extra special visit'. That could be a monster, local or patch rarity, an interesting-looking bird, a high count or a good fall. Delighted with the bunting, thinking this was my good bird in 20 visits, I continued to the track that takes me back to the house, enjoying the weather.

As I got to the track, I stepped around a large boulder, keeping an eye on my footing. I was vaguely aware that a bird had taken off from in front of me. After a couple more steps, I heard a distinct call, reminiscent of a Jay, from behind a low obscuring tree. In that moment, I thought to myself that Jay would be amazing for the patch, having only seen one in Caithness previously – which was the county's second record – three years ago.

I knew it was close as it was still calling, so I crept around the low tree. To my surprise, I could see that it wasn't the brightly coloured Jay I was expecting. What was it? Lifting my bins, I was stunned to see a Nutcracker. There was no need to think about confusion species – there was a Nutcracker staring at me from just 20 m away! After a stare off, the bird casually hopped up the Sycamore branches, flashing its distinctive white tail-tips at me. It climbed to the top of the tree and flew off. The white spotting on the brown back colour was so smart, and having only seen images of Nutcracker before I hadn't imagined it being as big and bulky as it was. 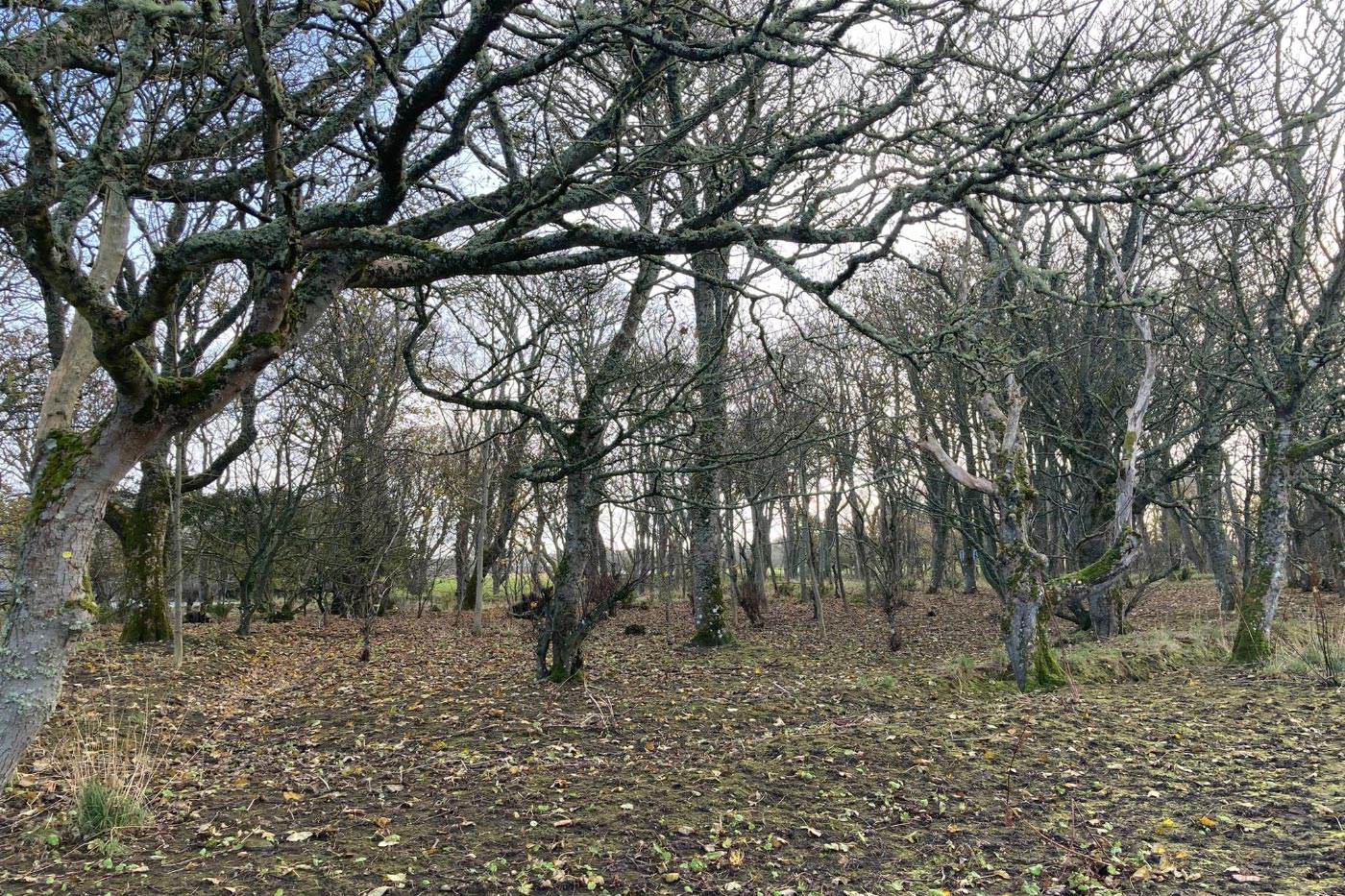 The Caithness woodland where Rob had the fleeting – but magical – encounter with the Nutcracker (Rob Hughes).

It then started to sink in. While phoning my partner Nina I realised my legs had gone to jelly and I had to lean against a wall. I sent some panicky messages to the local WhatsApp group and Twitter. It was only later that I heard from the people who phoned me that my voice had gone quivery too.

I've spent hours walking in forests in Finland, Latvia and Austria looking for Nutcracker and never been lucky enough to see one. I would never have expected to find one on my local patch – it wasn't on the radar at all. There are certain species that your mind wanders to finding on the quieter days, but Nutcracker hasn't ever featured.

Unfortunately, despite searching the local woods, leaving peanuts and apples at the site and loading up our bird feeders, the bird hasn't returned. There aren't many birders in Caithness so I'm particularly grateful to Peter Stronach and Bob Swann for coming straight up from the Highlands to help with the relocation effort. I put a message out in the Caithness Birds Facebook group hoping that it might be relocated in a nearby garden, and the search continues.