"I must change that alarm ringtone." That was the first thought that entered my head at 05:50 on Sunday 18th July — a generic Nokia nightmare that forces me to flounder for the phone before it wakes any of my housemates. The early morning grumblings of a birder are oft frowned upon by the sane and well adjusted. My second thought was that "I don't hear any wind outside", and a quick look out the window left me unimpressed. I couldn't see much movement in the trees outside my house, but there did appear to be a breeze evident on those at the top of the hill.

"Ugghhhh... do I really want to do this today?" A friend's birthday party the evening before had me out later than usual the night before a planned seawatch. Perhaps I should have taken the option of the offered sofa bed. Any 'normal' person would have done so, but birders aren't normal though, are we? I hauled myself out of bed and trudged, groggily, to the bathroom.

"I'm getting old" — no doubt about that, the mirror doesn't lie. Five years ago I would have already been on the road. Now my body longed for the warmth of my bed and my brain refused to work without the smoky kiss of a hot Italian coffee. A splash of cold water and the injection of caffeine via the method above would have to keep me alive and awake for the next 12 hours. Thankfully my tardiness at home didn't impact upon my arrival time at Galley Head, pulling into the old castle lay-by at approximately 07:00 — access to the lighthouse compound now being barred.Coming over the high ground of Ardfield had worried me. Thick fog was evident in the higher areas, and there was not as great an improvement as I had hoped there would be at the tip.

Most of the first hour was spent scanning close inshore through binoculars; there was simply no other choice. The line of fog and rain restricted the view to only a few metres of rough sea between the Head and the weather barrier. Manx Shearwaters were moving through in small groups and one or two Storm Petrels swooped over the surf at the base of the cliff. Birds were certainly out there. 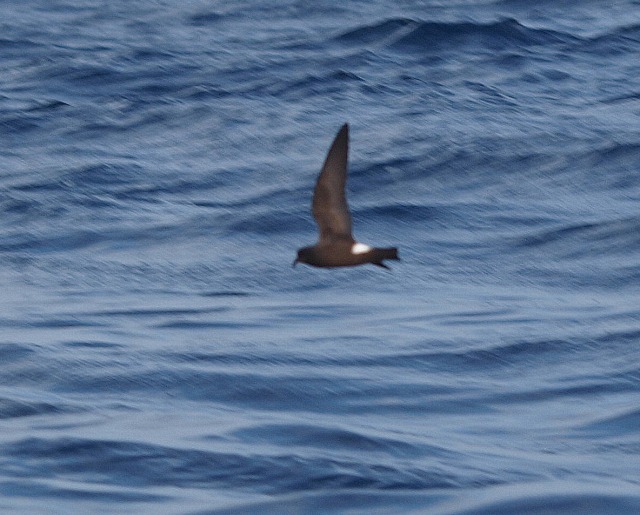 The upperwing pattern was muted and subdued, with faint, warm greater-covert panels which didn't reach the carpal joint, and lacking the contrast between mantle, covert bars and flight feathers that Leach's normally has. The wings were also clearly more rounded than Leach's. A clear, neat, unmarked white rump extended down and around towards the vent and the tail was neatly squared off, clearly not forked.

The bird loped along the trough in a straight line, only banking when a wave crest would force it up above the water's surface. It would stall and flare out its tail, further showing it to be lacking a fork, before continuing to glide interspersed with long, powerful, graceful wing strokes. It was a Madeiran Storm-petrel. I tracked the bird west until it was eventually enveloped by mist yet again, my jaw unable to close the whole time the bird was on view. 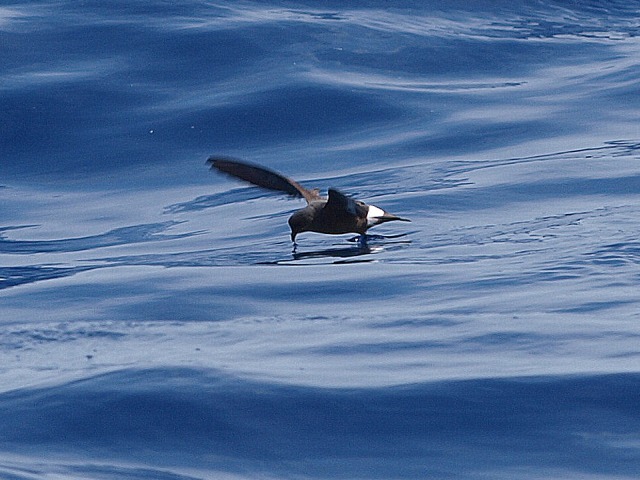 There are no words to describe the shock with which this bird impacted me. For a full five minutes after the bird had disappeared back into the mist, I sat back in the worn-out grassy hollow, mulling the event over in my mind. Finally I realised there was nothing for it but to trudge back up to the lighthouse and put the news out. Maybe, just maybe, Steve Wing on Cape Clear could intercept this mega rarity.

As I emerged from the hollow, I heard a whistle and turned to see fellow Cork Blow-in, Rónán McLaughlin, huddled up against the wall of the compound. His face was telling me more than words could.

"That big petrel? I did. Thank god you got onto that!"

We compared our notes and agreed fully. The news had to be put out. I ran back up to the compound and put out a mass text, whilst Rónán settled back down in the hollow.

I didn't wait for any responses and descended back down the cliff, out of phone signal, to join Rónán. We could have sacked things off there and then, but little were we to know that the day had more in store for us.

Petrels were now streaming through en masse! Massive numbers were close inshore and within 20 minutes I had picked up a Wilson's Storm-petrel gliding slowly along at less than quarter-distance. A tick for Rónán, this was followed up with two more birds within the next hour and a half, and a rather fetching first-summer Long-tailed Skua, which I tracked for nearly the entire field of view from east to west. 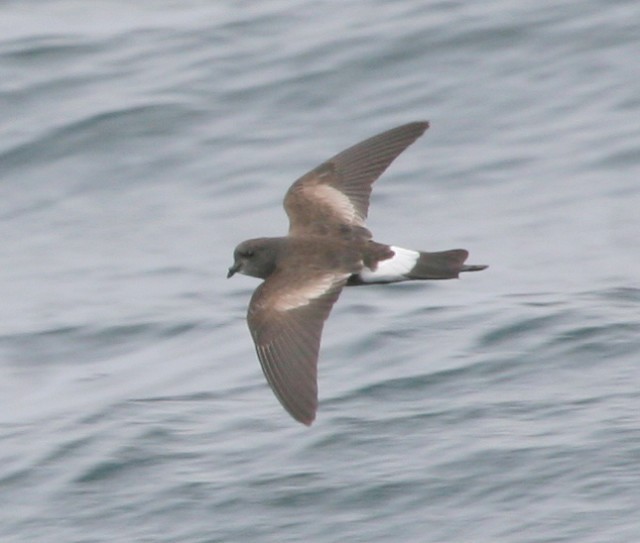 Rónán and I then left, after a very successful morning; Rónán headed home and I set off for Rosscarberry for food and to dry off. I had only just pulled into the Celtic Ross hotel when I got a text that Ciarán Cronin had picked up another Wilson's. This was followed by numerous updates over the next two hours, with five more Wilson's picked up between the two lads. Something special with petrel migration was clearly underway.

Having dried off sufficiently and raised my body temperature back up to normal levels, I ran back for the evening bout of seawatching. I joined Ciarán and Colin in the hollow, and within 10 minutes I picked up another Wilson's Storm-petrel, a very tattered bird that we all enjoyed at reasonable range. Other birders showed up as the evening wore on, tempted out by the barrage of rarity news emanating from Galley. However, as the evening drew in, visibility worsened and petrel numbers decreased, though shearwater numbers picked up significantly. I picked up one more Wilson's, number 10, but sadly was unable to get any of the others on to it.

At around 18:30, cold, damp and exhausted, but in a euphoric state, I made the decision to head home. The day was done and had the feel that the sea had given us all it had to offer. A barrage of text messages and missed calls awaited me on the drive back to Cork city, as friends and well-wishers expressed their happiness and contempt (often eloquently and efficiently done within the same text).

I figured I deserved a treat and settled into the Wilton Bar for a slap-up meal and cool, sweet pint and watched the messages further roll in. My final text to a friend that evening as ever expressed my passion and hunger for seawatching and ended only with the phrase "It's not even August yet."