East Guldeford Levels is a large, open expanse of arable and grazing land at the eastern extremity of Sussex, just east of Rye. I first went there to fill in some gaps in coverage for the national Atlas project, liked it, and have been visiting regularly for the last few years, principally to record farmland birds —  apparently few others go there.

Having missed a Hen Harrier elsewhere the previous day, I decided to visit the levels on the morning of December 30th to try and find one for myself. It was a lovely, frosty morning, and almost immediately I saw a fine male, looking great against the white fields. Well pleased with that, I continued down the main track into the heart of the Levels.

Suddenly, a plump looking bird shot up from beside the track into the sun, showing a lot of white, and landed in a frosty ploughed field about 100m away. I didn't immediately realise what it was, and suspected some kind of artificially released gamebird, but I moved in order to get better light, whereupon I was amazed to see a small bustard — surely a Little Bustard, a bird I hadn't seen for 25 years. 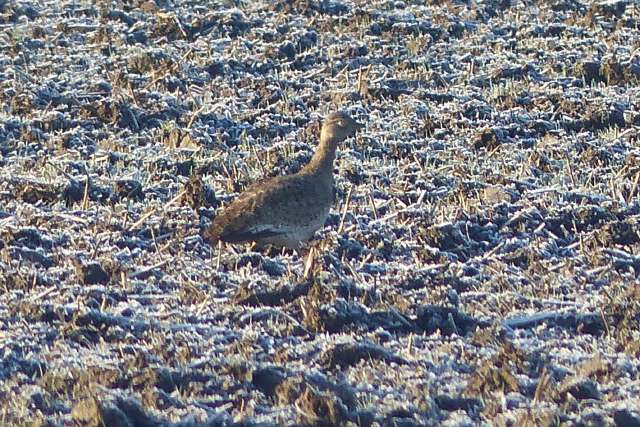 Fortunately my camera was to hand, so I first took a few shots of it on full digital zoom, intending to then study it at leisure. It was just as well I did photograph it, as the bird suddenly took off — I got one flight shot — and flew strongly towards Rye Harbour. The bustard again displayed lots of white in the wing, while putting up all the Lapwings and Golden Plovers it passed over. 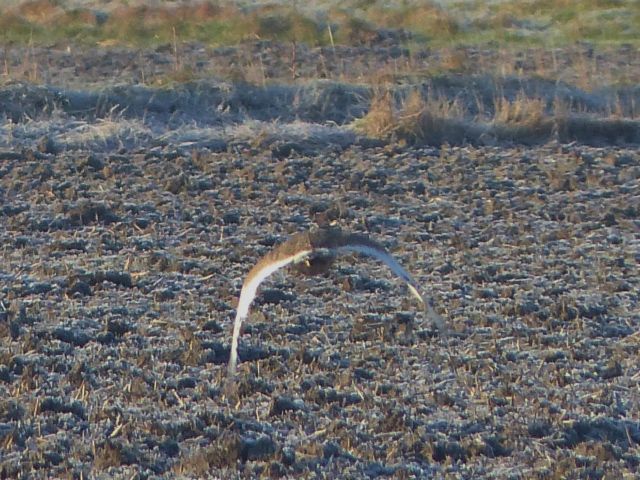 The distinctive white upperwing is immediately apparent in this shot as the bird flew off (Photo: Alan Parker)

I watched it until it was lost in the distance, then tried to alert a few local birders. My phone had some problem, but with great difficulty I managed to talk briefly to a friend who alerted the staff at Rye Harbour NR; they then began to search likely parts of this extensive reserve.

Cutting my visit short, I returned to the car, passing through the fields the Little Bustard had flown over, checking these without success. Back home, I compared my hastily-taken photos — which were better than expected — with the pictures in the Collins Bird Guide, phoned the news services and let various local birders know about the sighting.

Throughout the day I expected to hear that the bird had been relocated, but despite lots of searching, it was not seen again; I was really glad I had taken those photos!

One other thing I did as soon as I got home was to check my old records; remarkably, I have found a bustard in Britain before, a Great Bustard which flew past me over the sea wall at St Mary's Bay, near High Halstow, on Kent's Hoo Peninsula in 1981. I hoped for a remarkable coincidence of dates, but just missed it by one day: that was on 29 December.