I live in Northumberland and visit East Sussex, where I have family at Ridgewood near Uckfield, two or three times a year. As a keen birdwatcher, I walk the various trails and paths among the wonderful habitat in Ashdown Forest very regularly in an attempt to see both Woodlark and Dartford Warbler — two species which do not occur back home.

It was 10 June, and very warm and sunny. Over the previous few days, in glorious weather, I had seen some great birds. Today, I was at the 'Old Landing Strip' — accessed from the Long car park. After only 10 minutes and well out among the gorse and heather, while scanning to the south, I saw a seemingly large and very pale raptor way off in the distance.

It was hanging in the wind, only making small adjustments to its position, with very little effort, and I thought to myself "I must get closer — this looks different and very interesting." After running and stumbling along the paths and over the thick heather, and out of breath, I got fairly close to the bird. I could see it had long angled wings, thrust forward at the carpal, the whole of the underwings being very pale with slightly darker tips to the primaries. With the blue sky and very strong light burning out much of the detail on the underparts, I could just discern a few faint spots or bars on the underwing and body and the hint of a breast band. I realised I was watching an eagle species but was still unsure of its size, as there were no other birds in sight for comparison, and I kept thinking to myself "am I missing something — is this just a pale Buzzard?" The jizz of the bird and the lack of even a suggestion of a comma on the primary coverts discounted this but I needed something more substantial to convince myself.

I soon got it when I heard a Common Buzzard calling and it came out of the sky from nowhere to mob the eagle, which took evasive action by flipping over on to its back presenting its talons to the Buzzard. With these fabulous views, the wingspan of the eagle was seen to be 25–30% longer than that of the Buzzard, or perhaps a little more, and also having seen the unfeathered legs I knew I was watching a Short-toed Eagle. I am very familiar with the species, after seeing my first in the Spanish Pyrenees in 1990, as well as during many subsequent visits to Spain and other countries. 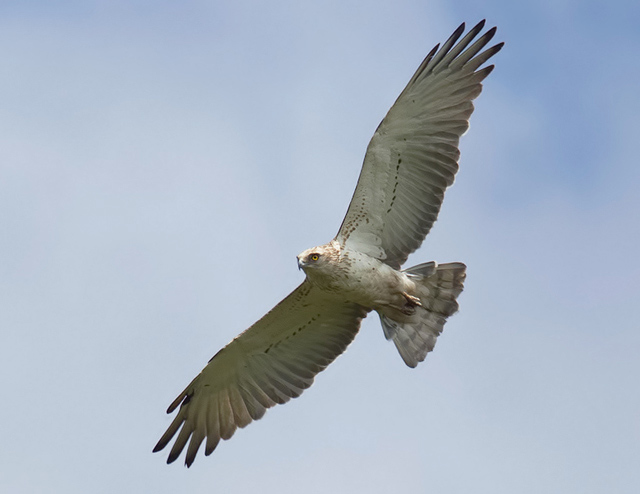 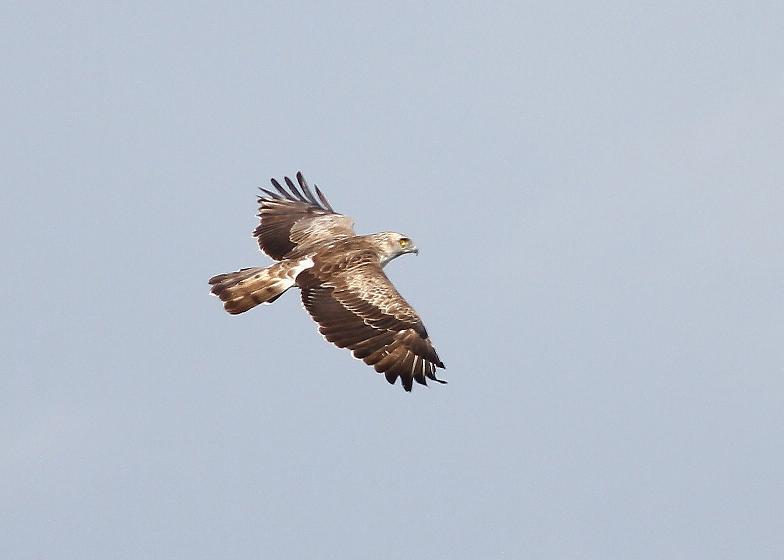 I was absolutely buzzing and reached into my pocket for my phone to report the bird, but was horrified to find that I had come out without it. I know the importance of getting rare bird news out quickly, but pondered what to do for a few minutes before deciding, as it was a once-in-a-lifetime experience, that I would stay and watch this amazing bird. I watched the bird from approximately 10:35am through to just after midday, mostly over the heath to the south of the Old Landing Strip from various distances and angles, at times directly overhead which afforded superb views. It would also go missing for short periods, but would re-appear usually off in the distance, in the opposite direction from where it had previously been seen. No other birders were seen on the heath and I finally lost the bird, fairly high towards the A22 a little north of the car park. Although I was on site for another 30 minutes, I failed to see it again and presumed it had moved off.

I have found the odd scarce and rare bird at home but this is my most unexpected find, and although I was very fired up and on a huge high my joy was slightly tempered by not being able to share this experience with other local birdwatchers. Because the eagle had apparently flown off I was unsure how to report it, but I knew Alan Tilmouth, who works for BirdGuides and is a birding mate back home in the North-East, would be interested so I sent him a brief text after I had returned to my sister's home in Ridgewood.

With Alan being a busy father of young twins, it was a little later when he got my message and put the brief details on BirdGuides. As expected the doubting locals came out in force and I found some of the negative comments very tiresome. Alan meanwhile was frantically trying to contact me but, with no reception in Ridgewood on my mobile network, it was the next morning when we spoke to each other and the exact details were put out in the public domain. There were, however, no further sightings and the eagle was reported back in Hampshire on 13th.

Fast forward to Sunday 15 June and I was birding at Old Lodge Nature Reserve, one of my favourite sites in the forest. Other species seen included displaying Tree Pipits, lots of Redstarts, recently fledged Great Spotted Woodpeckers and many Lesser Redpolls among others. As I was heading home the following day I was keen for one last walk in the forest. Having seen them nearby on Friday, I drove to Four Counties car park, crossed the road, and walked to where the heathland stretched away below the high vantage point.

Scanning around to get my bearings, I noticed a large raptor over the ridge to my right, probably five or six hundred metres away, and incredibly it was the Short-toed Eagle I had seen three miles or so to the west back on the Tuesday! Running closer, I got very close to the bird and, with the overcast conditions, a great more plumage detail could be seen and I was now happy it was the same bird. This time, with a fully charged phone at hand, I passed on the news to Alan back home, barely able to contain my excitement as I tried to explain the new location. This time the news was immediately put out and, within 30 or 40 minutes, a large group of birders were assembled at the roadside, opposite Gills Lap car park. I was delighted and very relieved that the local birders were now enjoying the eagle, a first record for the county, albeit a few days after it was first reported. 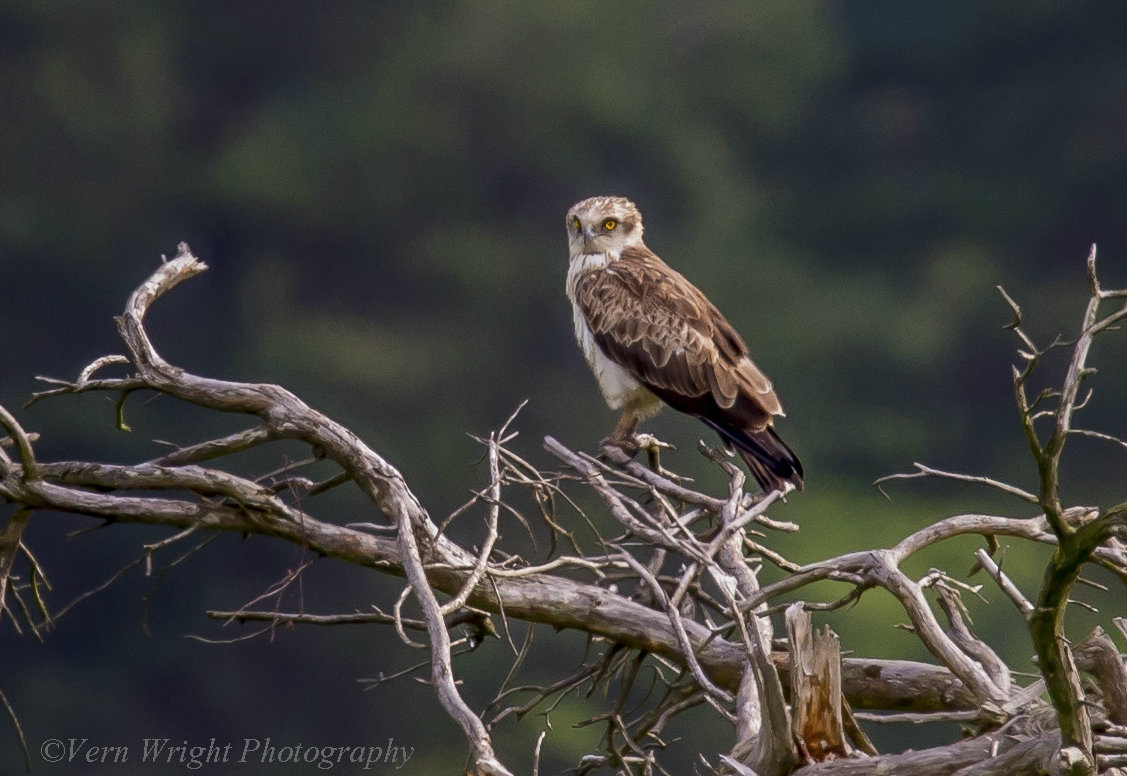 Meanwhile, I was well out on the heath where the bird was performing absolutely brilliantly. Again, as last Tuesday, it was covering great distances, but at occasions would come really close, seemingly not bothered by my presence, hovering and hanging in the cool breeze. On many occasions it was seen to close its wings, with bare legs outstretched, plunging down at great speed among the heather and gorse, reappearing on three occasions with what were presumed to be snakes in its bill and swallowing them while on the wing. For more than an hour I had incredible views, at times down to less than 40 metres at a height of 40 feet. The yellow eye and grey bill with darker tip were clearly seen and due to the terrain, the upperparts of the eagle were seen very well as it flew past beneath me. 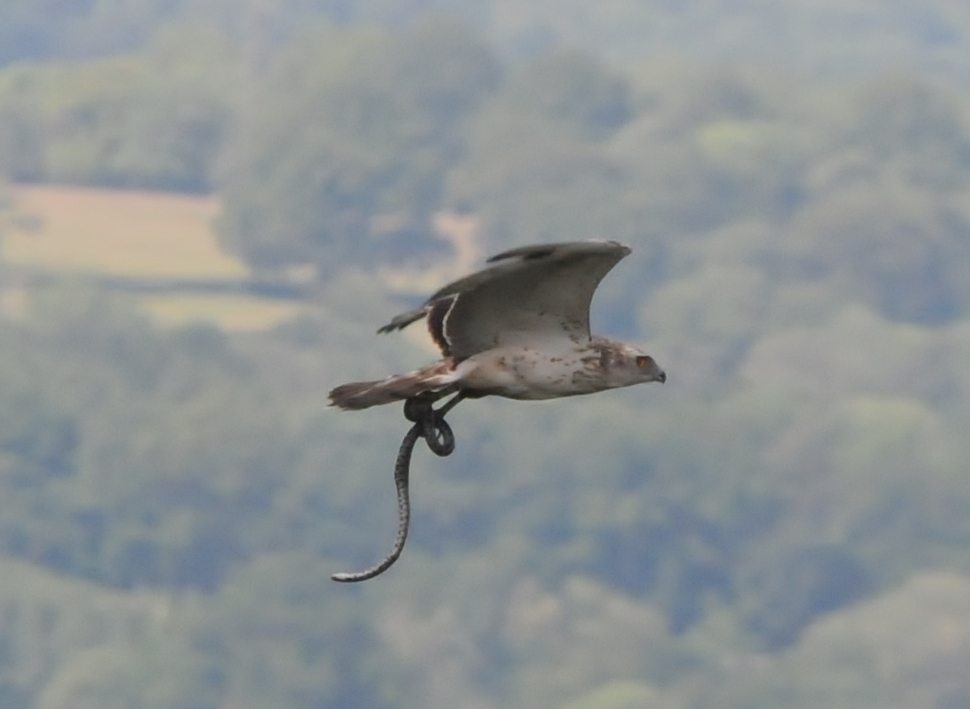 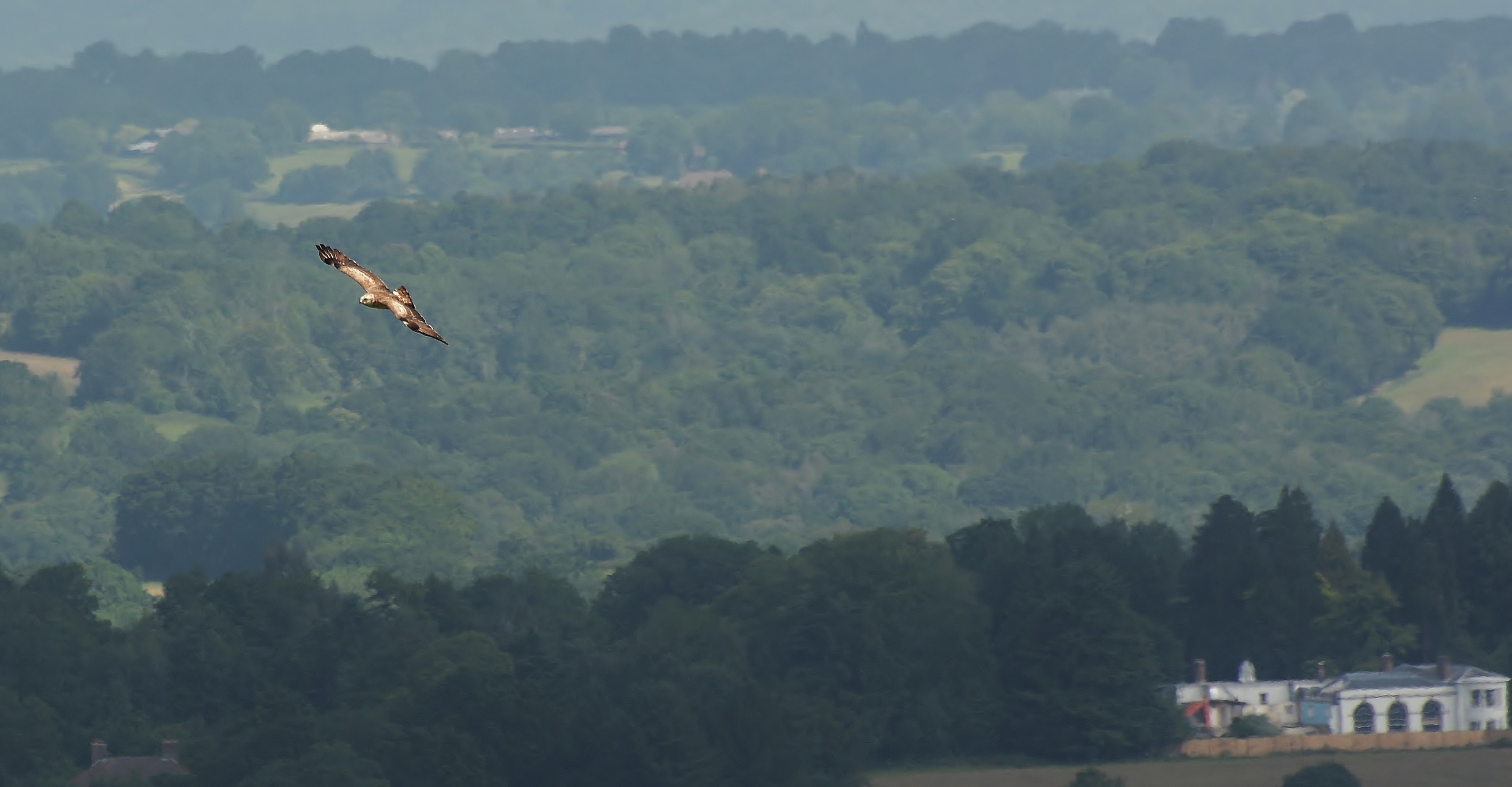 At around 1:40 pm it soared up high, crossing the road, heading off west in the direction of the distant Old Landing Strip where it was seen later in the afternoon. A few of the local birders I talked to thanked me for getting the news out so quickly, saying that I had made all Sussex listers very happy. Also hats off to some of the doubters who took to social media holding their hands up saying they had got things so wrong. However, some of the more vociferous disbelievers have kept their heads firmly below the parapet — perhaps they have choked while eating an extra-large helping of humble pie!

The Short-toed Eagle was still in Ashdown Forest on 29 June, but had moved back to Pig Bush (Hants) by 30th. Given the length of its stay, it will have been enjoyed by hundreds of birders, both local and from afar, and many absolutely superb photographs have been published on BirdGuides as well as other websites. I do hope everyone got as much pleasure from seeing this fantastic bird as I did — Ashdown Forest is a splendid birding spot, and I will be back.