I'd been grumpy and frustrated for most of August having been confined to the house with gout. Fortunately, I was well enough for a family trip to see my dad in north-east Wales over the August Bank Holiday. It was great to be out again and the Red-backed Shrike showed well at Whixall Moss, as did a small group of Marsh Tits at Colemere. I'd been thinking about twitching the Greater Sand Plover at Redcar but, arriving back in south-east London on 31 August after five hours of driving, I couldn't face another day in the car.

I'd noticed that the wader numbers at Cliffe Pools, Kent, were steadily building up and I still needed Curlew Sandpiper and Little Stint for my year list. So, on 1 September, I woke up at 5.30 am and was quickly on the road. A Eurasian Hobby flashed low over the house as I left which I took as a good omen. Arriving at Cliffe I found one birder already at the viewing mound for a pre-work session and we were joined shortly afterwards by someone called Gary.

There were some 100 Dunlin and other waders on Black Barn Pools and over the next hour or so we picked out at least 12 curlew sands, the long-staying Pectoral Sandpiper, two Ruff, 10 Little Stints and hundreds of Avocets and Black-tailed Godwits on the other pools close by. The small waders kept making short flights, which shuffled the pack and kept interest levels high.  At 8 am work beckoned for the early birder, leaving just Gary and I.

Just before 8.30 am, while scanning the sandy bank between the two Black Barn Pools for the umpteenth time, I did a double-take. A new wader with a striking black mask, white throat and a broad orangey-apricot breast band had appeared from nowhere. My first thought was the Redcar Greater Sand Plover must have headed further south. I told Gary, who'd only started birding during lockdown, that I had a sand plover and quickly got him onto the bird. 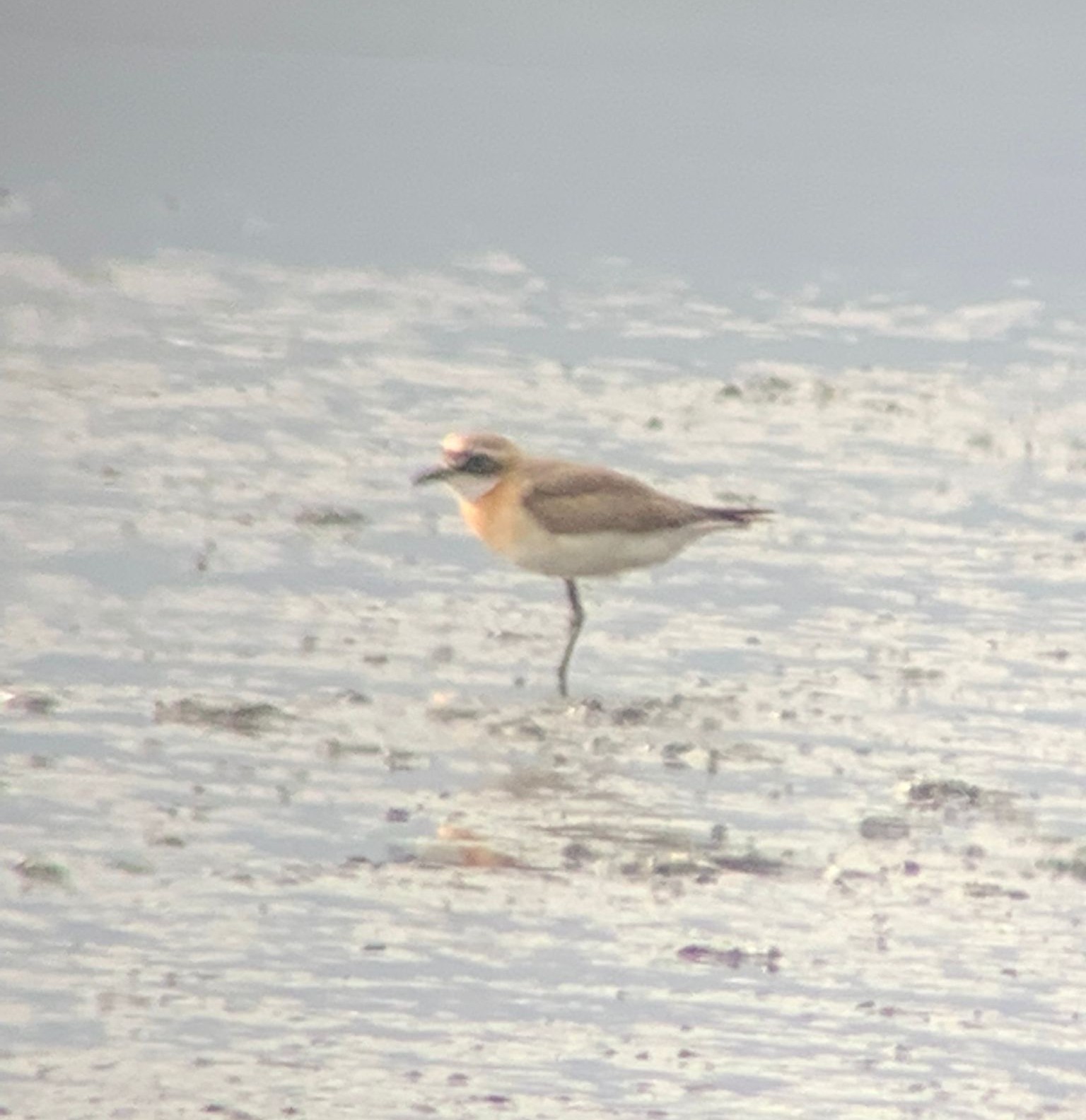 The photos taken by Gus show a bird with clean flanks, a relatively long bill and a forehead patch, all in keeping with a late-in-the-season Tibetan Sand Plover, the subspecies to which this bird should be assigned (Gus Wilson).

On looking closer this bird had a smaller, thinner bill, thin black legs and gave the impression of being smaller and more delicate. It was tricky to judge without any nearby birds for comparison. I was in a bit of a flap by this point and I knew I had a big bird on my hands and wanted others to see it. I quickly got a couple of phonescoped shots and a short video which I posted on the local WhatsApp group as a sand plover species. I'd seen that Ray O'Reilly was on site so I gave him a quick call and he joined us within a few minutes.

By this time the sand plover had been joined by two Ringed Plovers. They were very close in size, with the sand plover appearing marginally bigger. It was clearly a Lesser Sand Plover. The white forehead was quite extensive under a broad black band. 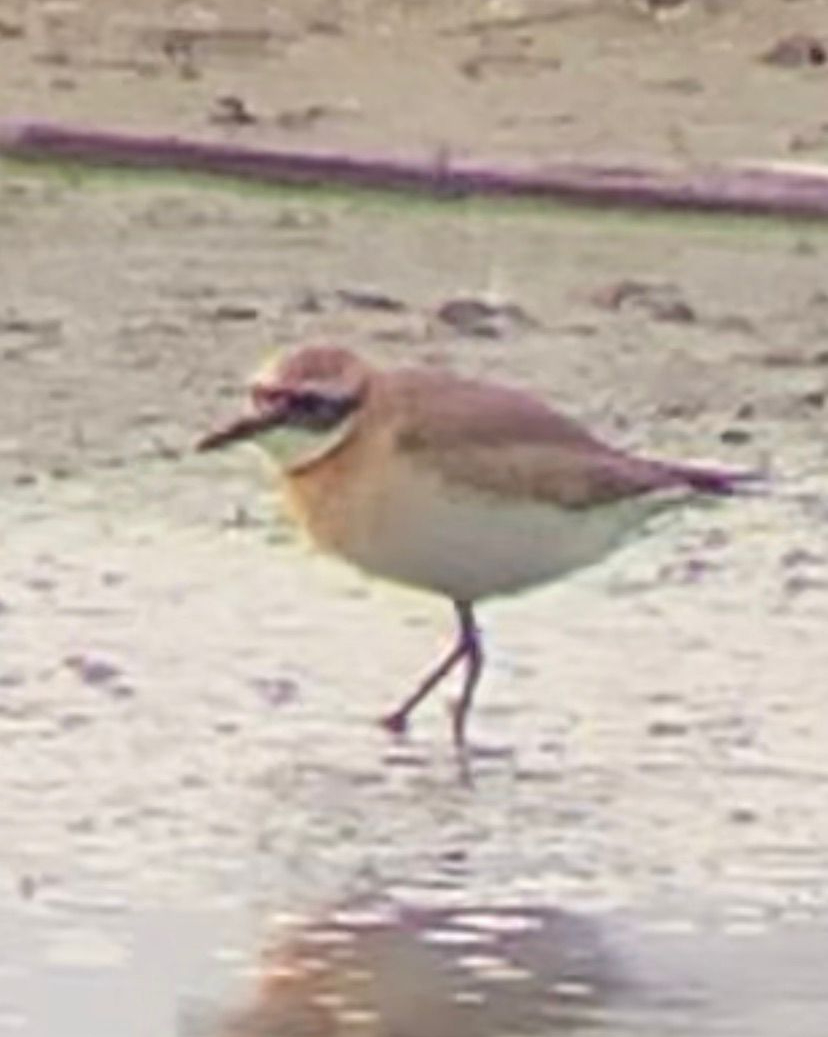 Genetic analysis of the sand plover complex has concluded that Lesser Sand Plover should be treated as two species, making the images by Gus all the more important (Gus Wilson).

The bill was slender and parallel-sided, pointed at the tip. The white throat was separated from the orange-apricot breast with dark lines from the shoulders not quite meeting in the middle. The breast became buffier lower down and the flanks and underparts were strikingly white. The black legs were much longer than those of the nearby Ringed Plover.

After 15 minutes we were joined by another local, Howard Vaughan, who was fortunate to be looking at his phone when my WhatsApp message arrived. Five minutes later the sand plover joined four Ringed Plovers and flew strongly east, gaining height until they were lost from view over Cliffe Church. Only four of us saw the bird during its half-hour stay and despite many people looking throughout the day – at Cliffe and further afield on the Hoo peninsula – it was not re-found. Howard kindly agreed to share his notes, and I've sent the record and supporting video and photos to the county recorder. 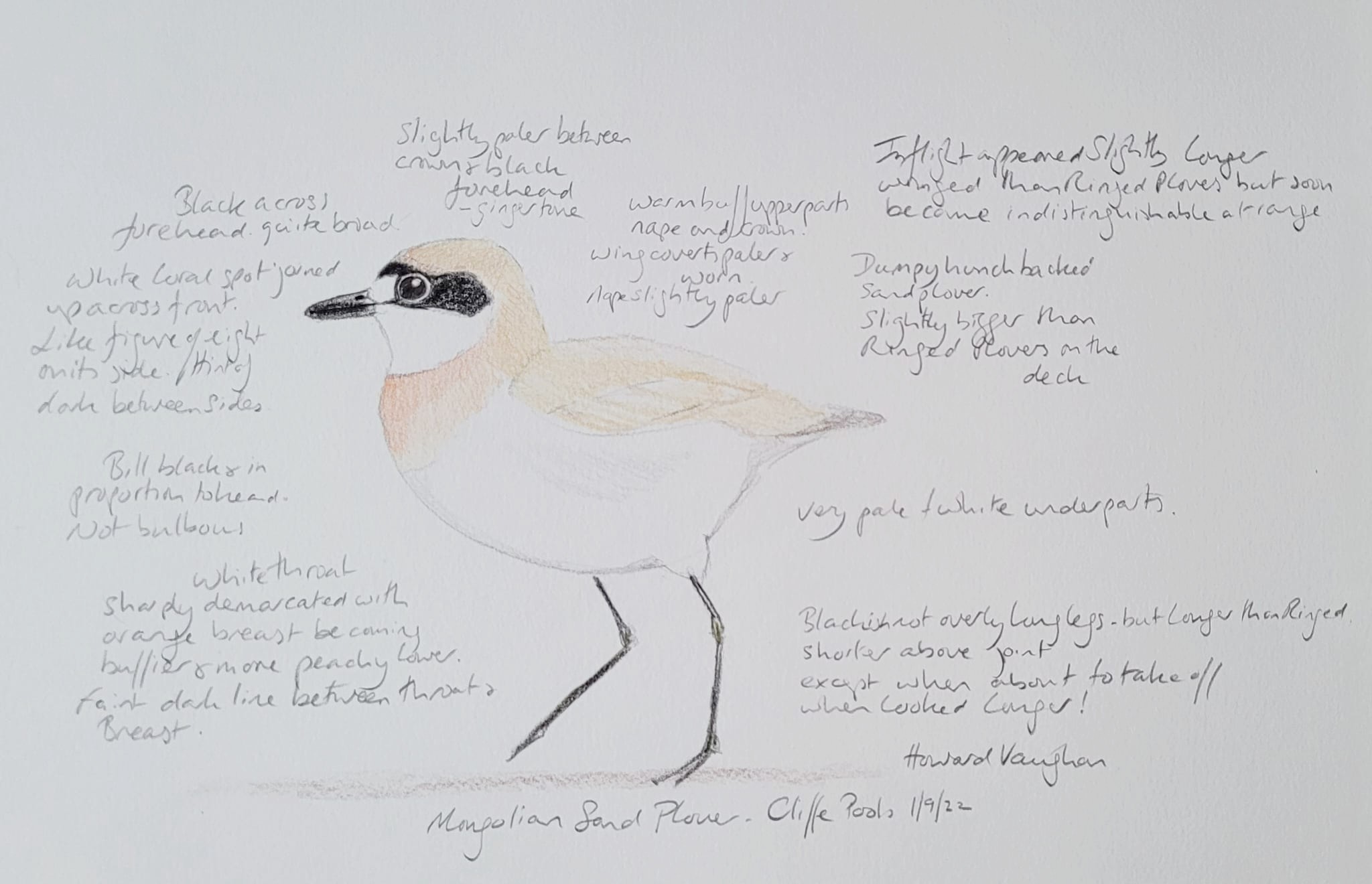 I'm grateful to my good mate Bernie who encouraged me to join the WhatsApp group during lockdown. Prior to that I'd been a bit of a loner when it came to birding. On this occasion it really helped get some of the dedicated local patchwatchers onto a great bird and I've met a lot of nice people and seen a lot more birds as a result.

So, having started the day wondering if I'd made the right call not to go for the Greater Sand Plover, I ended up finding its much rarer cousin. It's far and away my best and rarest find to date. I'm sure I'll catch up with Greater Sand Plover at some point too.