I have kept a Durham year list for the past two years now and always find it entertaining; aside from my British and county life lists it's the one I focus on the most. And, as spring arrives, I always try to see each migrant species in Durham as soon as possible; it fills in the hours and keeps things ticking over on a county level, which can be important for maintaining enthusiasm. As a result, when a Lesser Whitethroat was reported near Sunderland University I thought it would be rude not to call in to have a look on 24th April — little did I know that something altogether rarer would be waiting for me...

Having parked up, I proceeded to walk down the long track at Blue House Lane to listen for the whitethroat but, unfortunately, there was no sight or sound of it whatsoever. I decided to continue down the lane and, about halfway along, I paused when I heard a distinctive and familiar three-part song — saying to myself "that sounds like an Iberian Chiffchaff"! 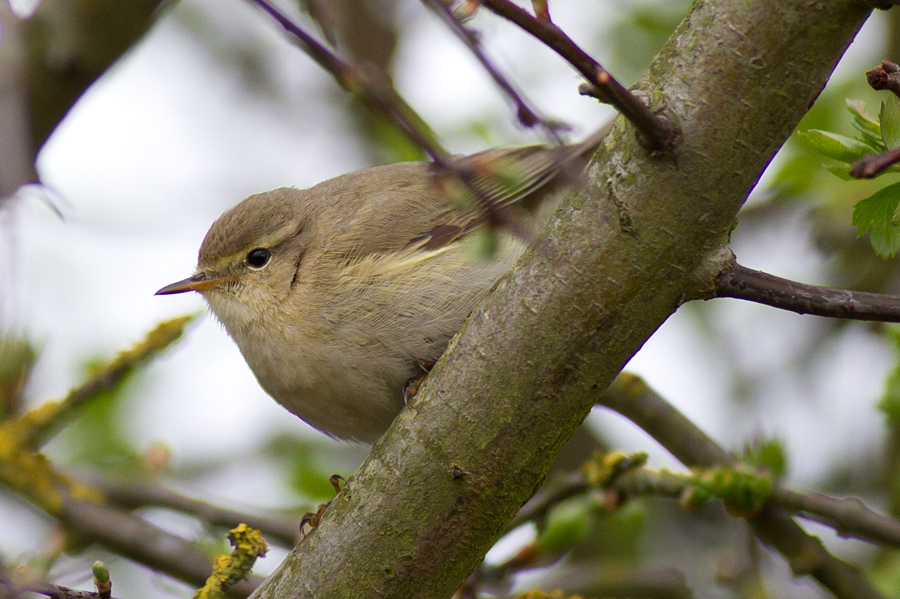 Iberian Chiffchaff, Boldon Flats NR, Durham (Photo: Martyn Sidwell)
In this image, note the extensively pale bill, bright yellowish wash to the head (particularly supercilium and cheeks), the indistinct and broken eye-ring limited to the lower edge of the eye and the pale greenish tones to the upperparts.

Like many birders these days, I have bird recordings loaded on to my iPhone and immediately worried that it was that playing by accident. But it was no sound recording and, after a few more seconds, the bird sang again twice. It was clearly Iberian-ish and panic quickly set in. Being a keen Durham lister I knew full well that Iberian Chiffchaff would be a first for Durham, and so I waited for another burst of song — this soon came; I managed to convince myself I wasn't hearing things and rang around the local birders.

A small crowd had soon gathered and, with the bird still singing, it was nice to hear a unanimous agreement that the bird seemed spot on for Iberian Chiffchaff as opposed to a mixed singer. Crucially, the bird looked the part too. Unlike the mixed singers of 2012 (West Sussex and Cambridgeshire) that quite simply looked like Common Chiffchaffs, this bird had an altogether more Willow Warbler-like appearance:

The bird continued to sing frequently throughout the day; during the entirety of the time I spent on site it only once gave a clear "Chiff-chaff" song before resuming the more typical song of ibericus. I had Iberian Chiffchaff song from Spain on my iPhone and I played this to see if it generated any reaction from the bird: indeed, the bird flew right towards me and began to sing and display! Though it could be mobile at times, fantastic views could be obtained with patience; of course, the constant singing helped considerably when tracking its movements!

I never thought I would find a first in the county that I hold so dear; I guess you just never know what is going to happen in birding and that good old rarity-finding cocktail of right place, right time, and a lot of good fortune of course plays a helping hand! By the way, I did hear and see the Lesser Whitethroat in the end — two-tick day! 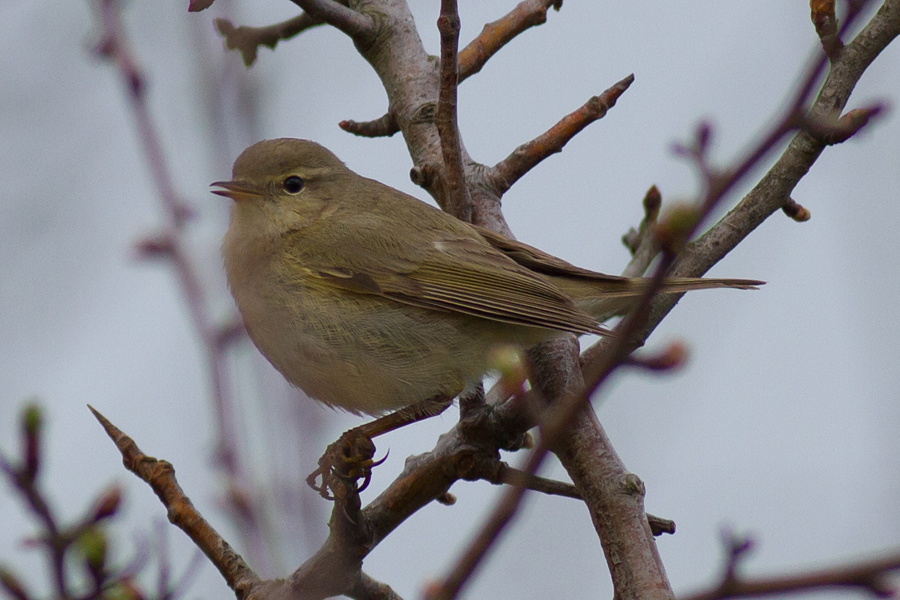 The Durham Iberian Chiffchaff was one of four birds to arrive during the week from 20th April. Two of the further three were singing males: at Soap Rock (Cornwall) on 20th and on St. Mary's (Scilly) from 24th onwards. Like the Durham individual, both birds gave perfect Iberian Chiffchaff song and also possessed a series of plumage and structural qualities characteristic of the species. Images of these birds appear below, while sonograms and sound recordings of the Cornwall bird can be found here. The week's fourth bird was at Flamborough Head (E Yorks), identified during the afternoon of 25th thanks to its diagnostic down-slurred call — it was not heard to sing. 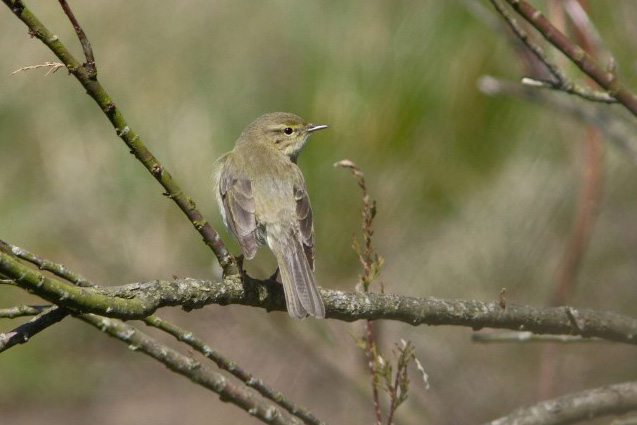 Iberian Chiffchaff, Soap Rock, Cornwall (Photo: Anthony Blunden)
In this photo, the Cornish bird appears both long-tailed and long-winged, while the bright sunlight highlights the pale green upperparts and the strong yellowish wash to the supercilium. 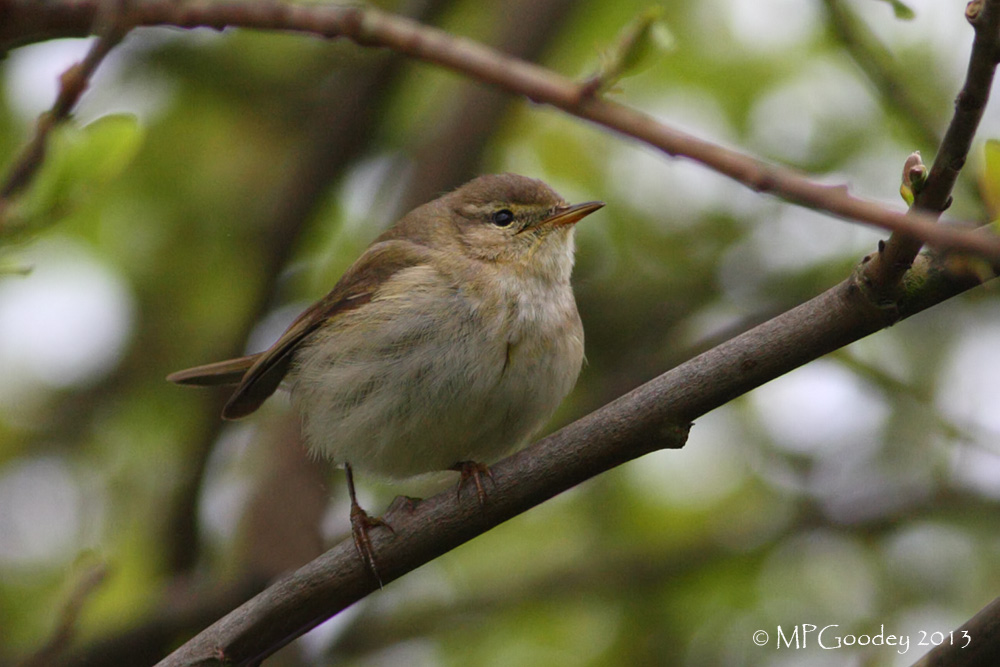 Though a greater appreciation and knowledge of the vocalizations and appearance of Iberian Chiffchaff has no doubt played a large part in converting the species from a mega-rarity to an almost expected annual spring overshoot (of the 29 accepted records up to and including 2011, 17 have been since 2006!), it does appear that something of an influx has occurred this week. The species has a tendency to turn up and hold territory just about anywhere — be that coastal scrub or a landlocked woodland and, with a clear arrival having taken place, this weekend could be the perfect time to find one on your patch. Here at BirdGuides, we're certainly anticipating one or two more records before the summer is out.