A sprained knee ligament on 13 May meant that I was housebound for the foreseeable future, so I would have to be content with finding and watching a European Bee-eater in and around the garden at Tarmon on the Mullet Peninsula from 14–20th May. Although this was very nice, by the 24th cabin fever was starting to set in and so I started to hatch an escape plan!

Putting that escape plan into action came sooner rather than later, with the announcement that there was to be a power cut for the whole day on Monday 25th. So, knee strapped up, painkillers dropped and crutches in hand, I got myself into the car and set off up the road to BirdWatch Ireland's Annagh Marsh reserve, where I spent the morning monitoring the breeding Lapwings from the car. Sometime around 1.30pm I relocated to the graveyard at Termoncarragh to continue with the monitoring, and some 10 minutes later a local walked passed and we exchanged acknowledgments. While doing so my attention was distracted by a thrush-like bird that had dived straight into a small patch of nettles in front of the car. Intrigued, I focused my binoculars on the nettles and shortly afterwards the bird popped up onto the fence — I was right: it was a thrush, but not any regular thrush — it was a Catharus! Hang on a minute: although the weather feels like October, this is May! Bizarrely, looking over my shoulder I could see Blackrock Lighthouse, where on 26 May 1956 the only other Catharus thrush to be seen in County Mayo had occurred: a Swainson's Thrush, the first record for Ireland (and the British Isles). 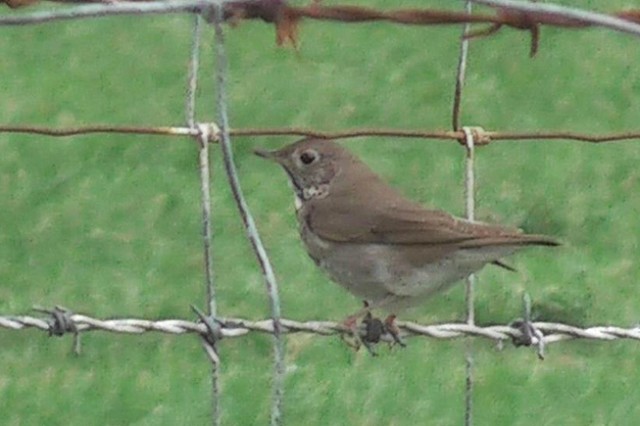 The old grey matter started to go into overdrive and, looking at the bird, thoughts of this being a Swainson's were quickly dismissed given the lack of any buff tones around the face, and the ear-coverts being undefined along the lower border. However, the supra-loral area was greyish and this, combined with the rear whitish eye-ring, did give the appearance of 'spectacles' at times. With this, thoughts then turned to Hermit Thrush, but with no redness in the rump, tail or primary edges and the upperparts being, at best, a warm olive-brown extending onto the tail (and only slightly warmer on the uppertail coverts and primary edges), the possibilities of Hermit, or even Veery, were dismissed. That left me with Grey-cheeked, and certainly some features 'ticked the box' when thinking back to some of the birds I had seen in the autumn (although that was a few moons ago!), like the obvious grey cheeks mottled with paler streaks. But why did it appear so warm-looking on the upperparts at times — maybe it was because it was a spring bird? Even so, thoughts turned to the possibility of Bicknell's — the 'warm' look could be a plus point and there was an extensive yellow base to the lower mandible. Could it be? Well, it appears that without any poo sample or stray feather that possibility will have to remain just that. 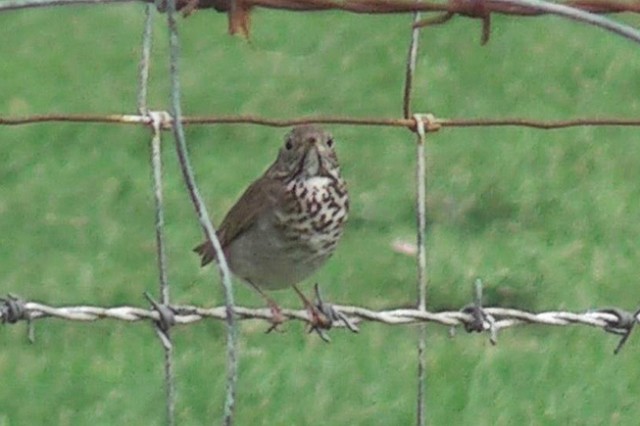 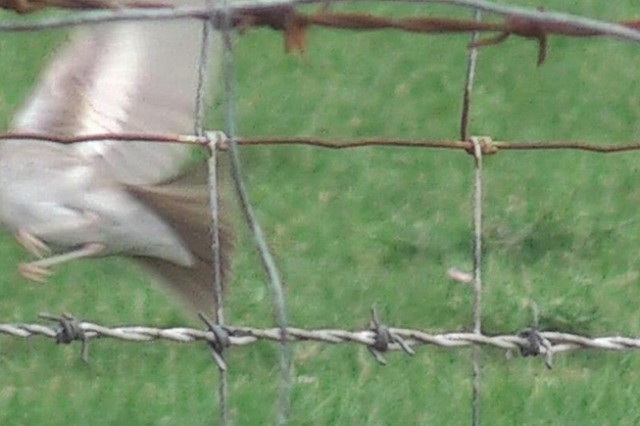 The bird was starting to move further along the fence line, so I now concentrated on getting some video footage; I manoeuvred the car slightly and managed to get a couple of short sequences at 50m range. After a few minutes, unprovoked, it took off and flew some 100m down the fence line towards the lake — I then remembered I was on crutches and unable to follow! However, I watched it through the scope as it dropped up and down from the fence, until it disappeared out of view. Some 45 minutes later Michael Reilly arrived and searched on foot but to no avail. I left around 5.30pm, informing MR that although a long shot it would be worth checking, later in the evening, the one and only bush in the surrounding area that was in the graveyard; it might come back to roost there. Sure enough, MR arrived back around 7pm and on a quick search of the graveyard found the bird feeding in and around the gravestones! Here, after having had excellent views, he left it undisturbed at 7.30pm. It was the last time it was seen.