It was 30 October and after returning from a predictably unsuccessful attempt to find anything in the patriotic homeland of Cornwall (now something of an inevitable tradition), the clocks had gone back, the winds were south-westerly and the prospects weren't looking that good for finding anything in east Cleveland either. Watching the BBC Breakfast forecast though, I managed to focus long enough on the right-hand side of the screen to see that the winds were in fact from the south-south-east — result, so our dog Flint's daily walk was going to be at one of three local patches, rather the local woods.

Choosing Hunley Hall Golf Course, I opted for the classic dog-walking technique of leaving him in the car while I quickly checked the plantation near the hotel first, somewhere I rarely check. A quick circuit revealed good numbers of Blackbirds and a couple of Brambling, although little else. Then, just as I was leaving the wood, I noticed a pale Phylloscopus warbler in the last sycamore. It appeared to fly across the road into some dogwood so I walked out to the edge of the wood to check, but couldn't find it — hey ho, another one lost — and I set about leaving again. As I did, something made me glance back into the sycamore, and luckily the warbler was again in it. I put my bins up and was stunned to see a green and white warbler with a couple of weak wing bars, and my first thoughts were "Bloody hell, Arctic!" It then came towards me and I was struck by its gleaming white underparts and the long bright supercilium, set in much darker surrounds. Time for a phone call! 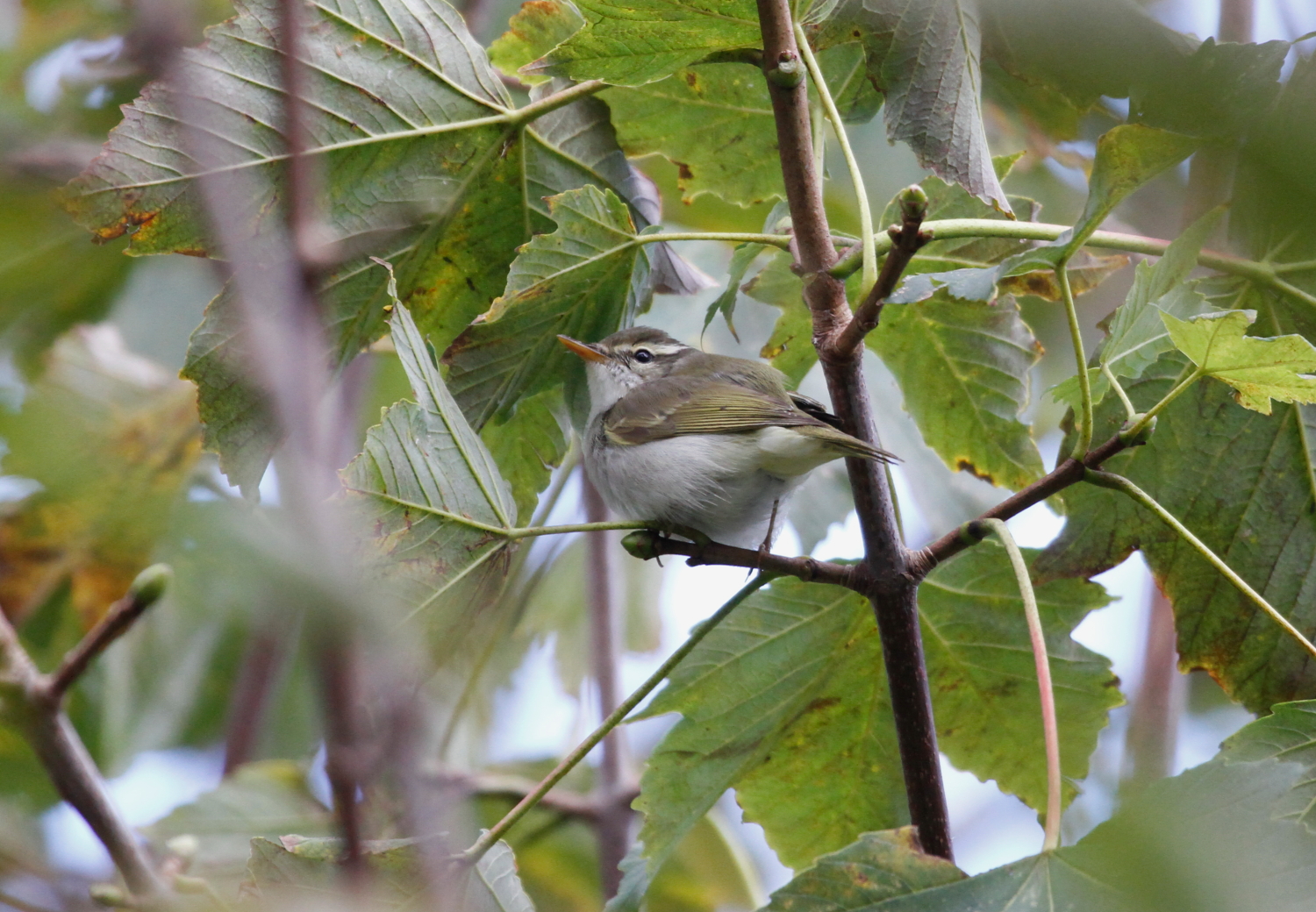 I phoned Mark Askew saying that I thought I had an Eastern Crowned Warbler, but that it may be just an Arctic. Unable to share my excitement (he had had to go to Doncaster), he did agree to make a few more phone calls. I then waited for backup and a bit of reality checking and during the wait the bird showed pretty well, at one point turning its head on its side facing away from me, showing what I was sure was a reasonably obvious central crown stripe. Things were now getting serious and I didn't have to wait too long before Graham Megson arrived, but the bird had moved further into the wood and had disappeared. He'd interpreted Mark's phone call as Eastern Bonelli's Warbler, so when I was waffling on about confusion with Arctic, he must have thought they were the ramblings of a madman. Quickly back on track, Ian Boustead arrived next, so we split up and tried to relocate the bird.

As the wood is hard work and the prospect of re-finding it seemed slim, I gloomily mused over the options for submitting the record. I was blissfully unaware of the coincidence in dates (the Herts record of 2011 also came on 30 October) — not that, frankly, I'd necessarily go out with a view to finding an Eastern Crowned! Anyway, back to reality — after a few minutes Ian Boustead shouted and came running up the path with the kind of athleticism only shown in the presence of a rare bird, saying he'd seen it and he was sure it was an Eastern Crowned. We found Graham watching the bird, and over the next half-hour or so we all got reasonable views, but agreed the crown looked entirely plain olive green and so, by now, we were convincing ourselves it was Arctic. Mark Rowbottom was next on the scene and, after a few more views, I'd clearly seen a broad off-white patch at the rear of the crown which, along with the gleaming white underparts, convinced me it had to be Eastern Crowned. What was going on? This was now getting frustrating. Mark was the voice of reason and suggested we now needed to do something — after all Arctic hadn't been seen in the county for a good few years, so either way others needed to see it and we needed to make a decision, even if it was a hard call for such a rare bird.

Mark's suggestion led to a flurry of activity: comparison of Ian's skilfully obtained photos of the bird with internet images, a few calls to people who could get to the site to help confirm what we were seeing, a discussion with college friend Martin Garner and a conversation with the hotel staff over parking arrangements. Time now to walk the dog. During my check of the wider golf course, others, including Tom Francis, arrived and confirmed the presence of lemon undertail coverts and this, combined with the suite of other features we'd seen, meant it was 'good to go'. 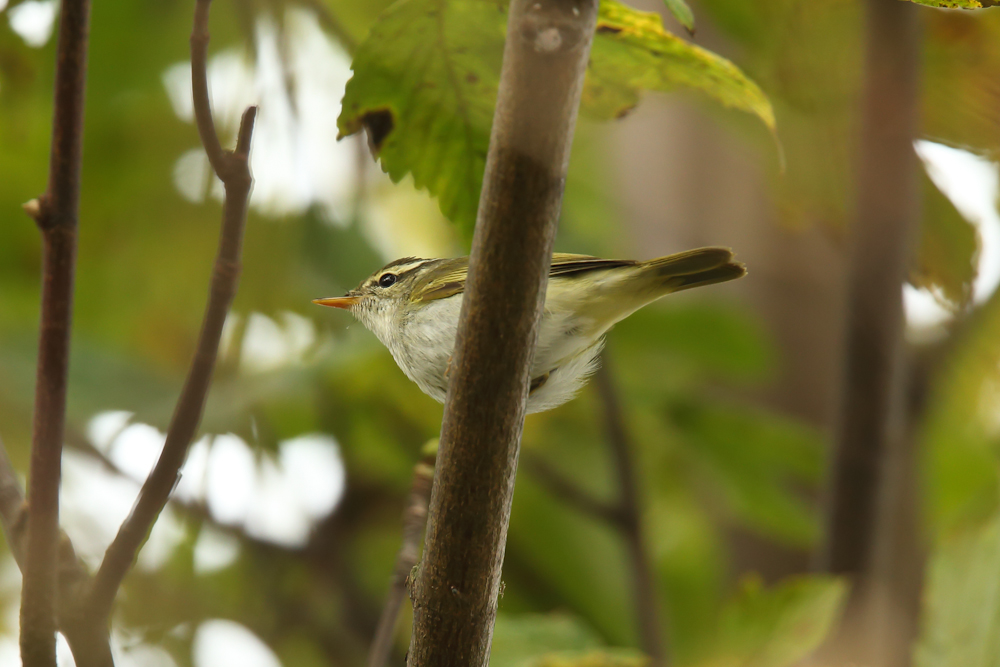 Good to go, but the story I'd actually told the hotel staff that it was a rare bird and that there may be a few cars and would they mind etc., assumed it was going to be Arctic. Therefore, another conversation seemed in order: there may be a few more cars now and would they mind...? They were remarkably helpful and while my decision to park cars in the housing estate wasn't the best in the world (well it seemed big enough at the time and I wasn't convinced the grass overflow would hold up), things seemed to go reasonably smoothly. 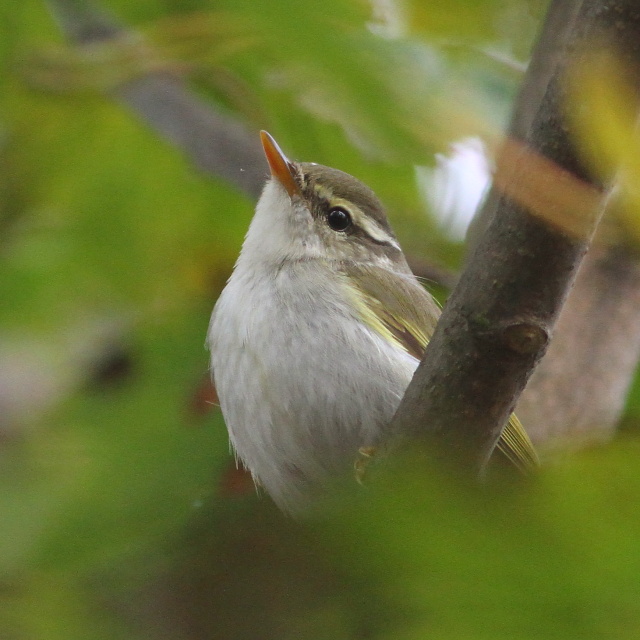 The bird moved around a bit sluggishly, not dissimilar to Red-eyed Vireo, which meant it could be frustratingly difficult to pick up at times. In the afternoon it vanished for over an hour and had moved to the far side of the wood, where it was re-found by Mark Askew (safely back from Doncaster) in a large leafy sycamore, although even then it was still difficult and some people were unable to get on it, not helped by the assault-course-like terrain on site and the fading light. Fortunately it remained pretty faithful to the corner of the wood where it was first found for much of the rest of its stay and showed well in some fine sunshine through to Saturday evening, but evidently departed overnight.

It was a fine-looking creature, with some cracking features: the dark olive lateral sides of the crown, the clean white underparts, lemony undertail coverts, the often-obscured median crown stipe and pale lower mandible — all easy to see in a relaxed state, but the leap from a phone call to a mate to a phone call to the wider world in a state of trembling excitement was a reasonably big one. Thanks to those who helped in the process of confirming the bird; you know who you are. 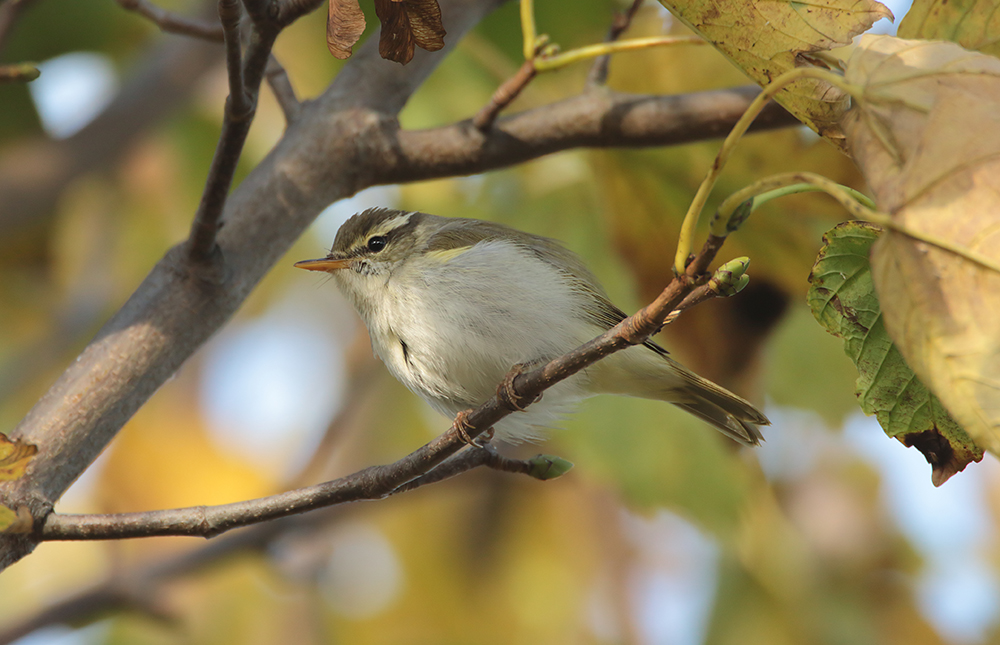 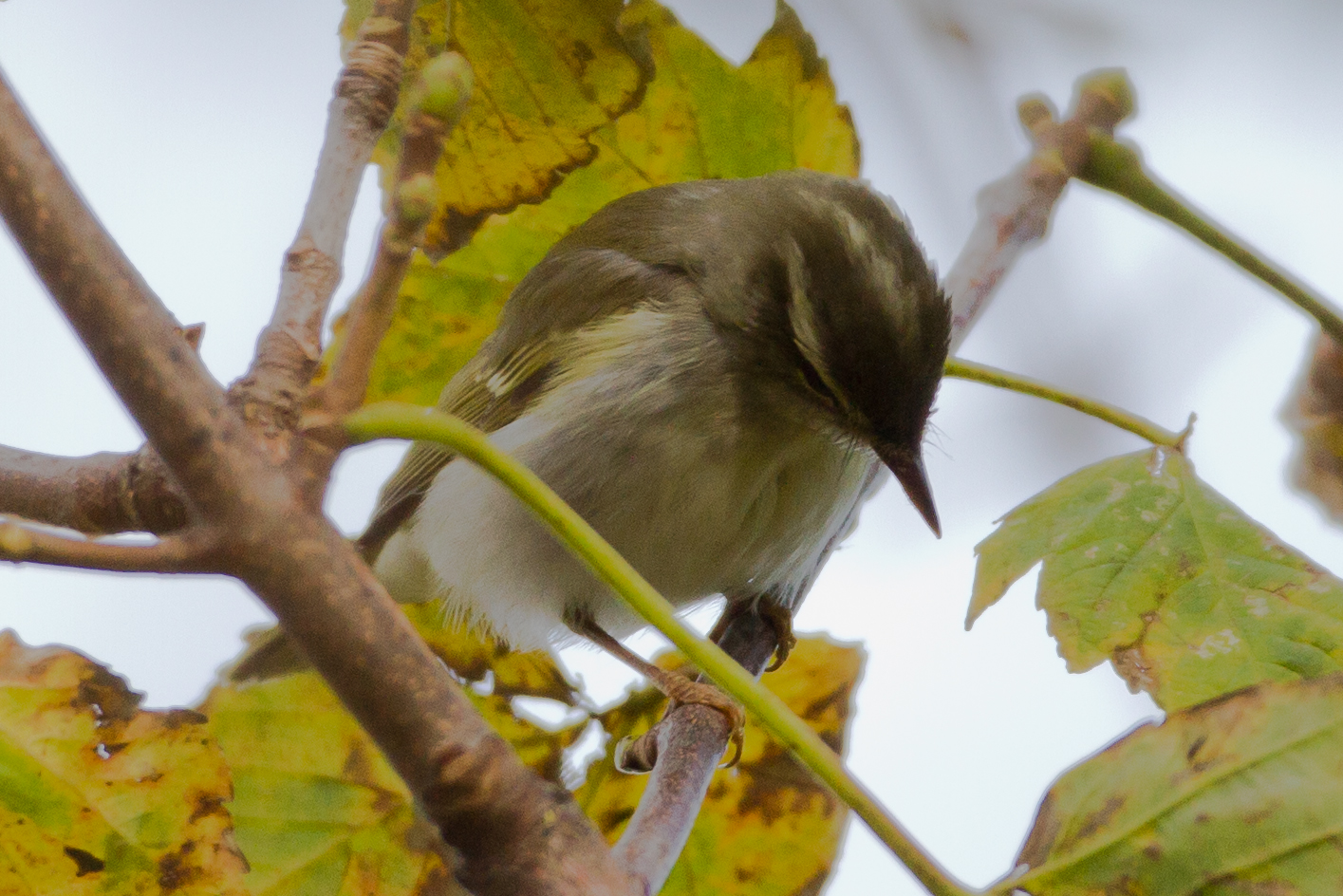 Our "little recording area", as some call it, of Cleveland can pay rewards for endless hours of patch working and for that I'm grateful. Suffice it to say I'll be checking the wood just a little bit more often in the future.