Kerry birder Liam Doyle and his 10-year-old son Adam were in the very fortunate position of being finders of a white-morph Gyr on 18th January. White-morph Gyrs are much sought-after birds, and here the Doyles describe their fortunate encounter:

"On Saturday 18th January we had our first sighting of Gyr Falcon. It was a bright and breezy day down at Fenit, a small fishing village on the outskirts of Tralee, County Kerry, Ireland. The village consists of a small port and much of its coastline consists of small bracken-covered cliff faces. It was on one of these very cliff faces that my son Adam — an enthusiastic 10-year old birdwatcher — first spotted the falcon.

He first saw it in a fallow green field beside the cliff face. The Gyr had just killed a Curlew, and was beginning to tear it apart as we disturbed it. It flew out of sight and we eventually found it perched on a rock on the cliff face, where we watched it for at least an hour. During this time it did not return to they prey — all it did was move from rock to post surveying the area. After an hour or so we left quietly." 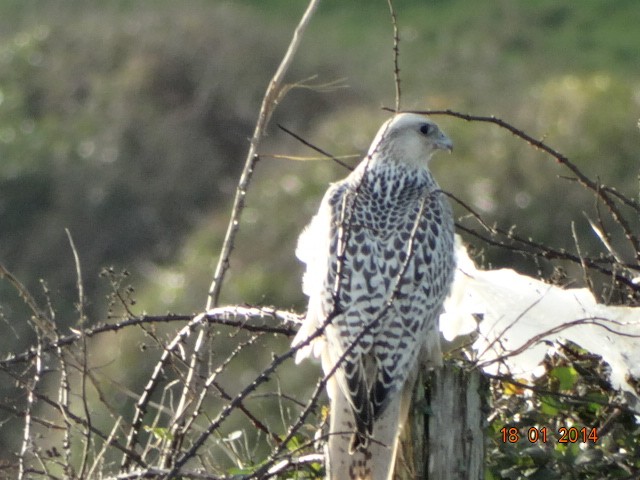 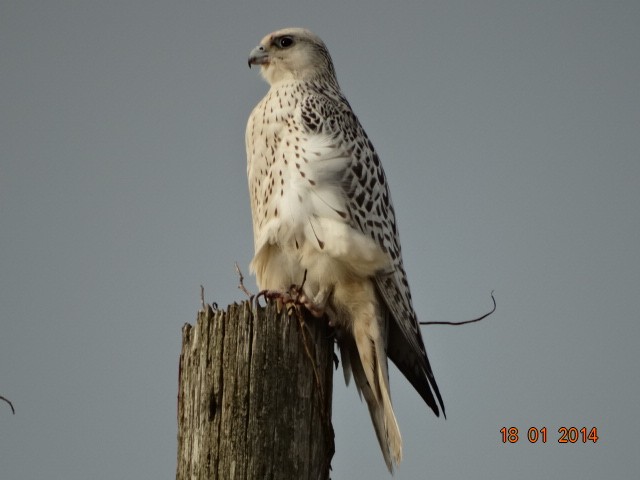 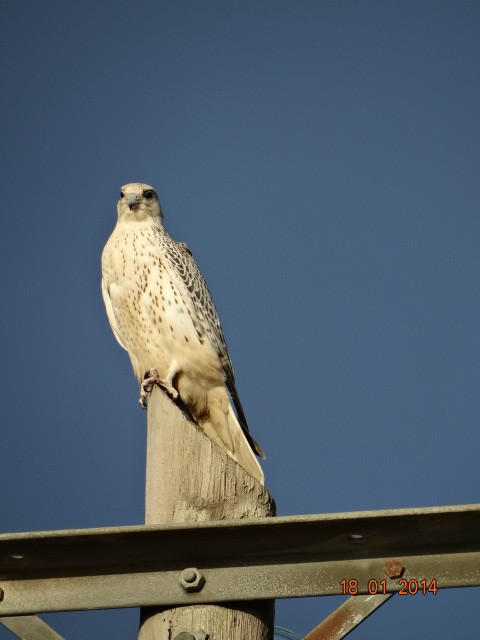 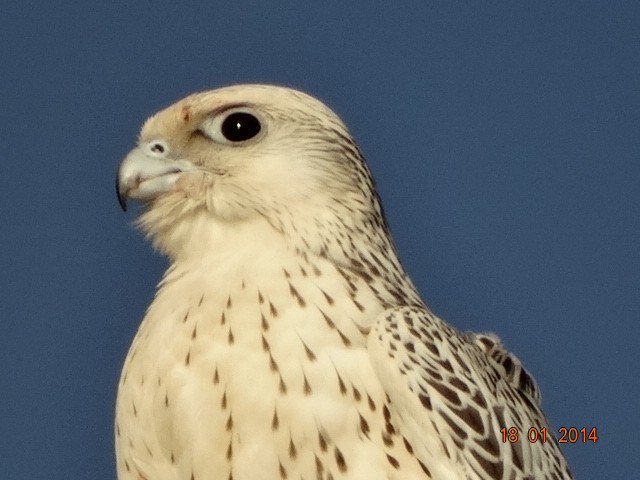 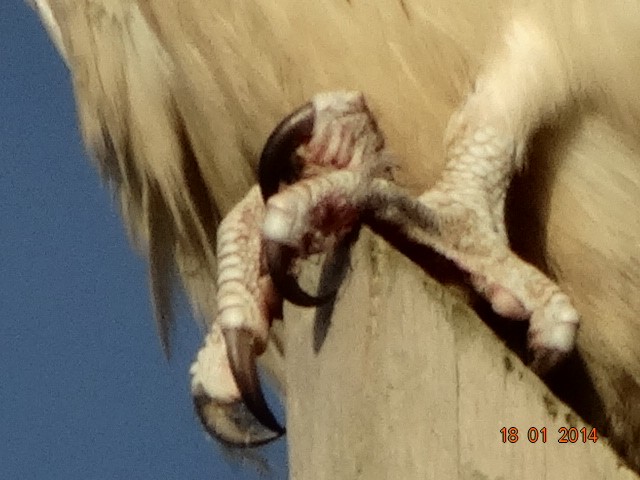 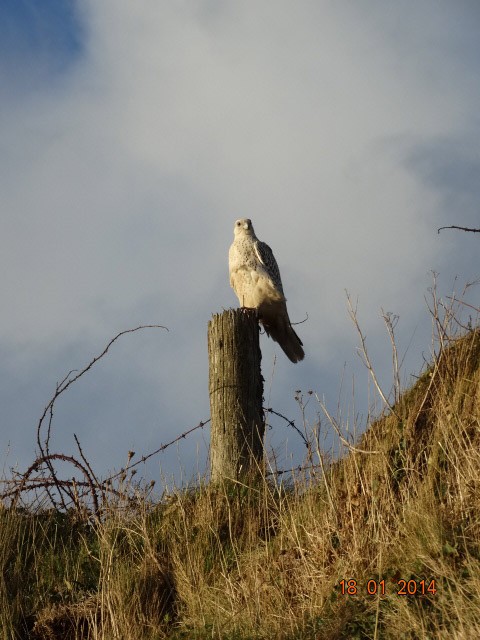 "Fifteen minutes later, we passed the same field where we had initially seen the Gyr to find that it had returned to its prey — obviously it didn't like being disturbed eating!" 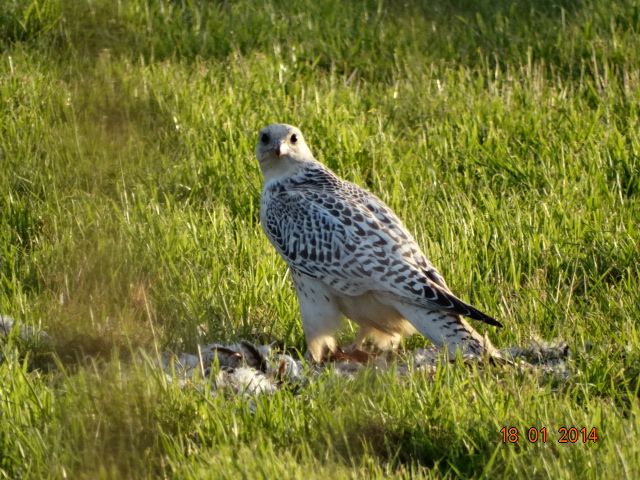 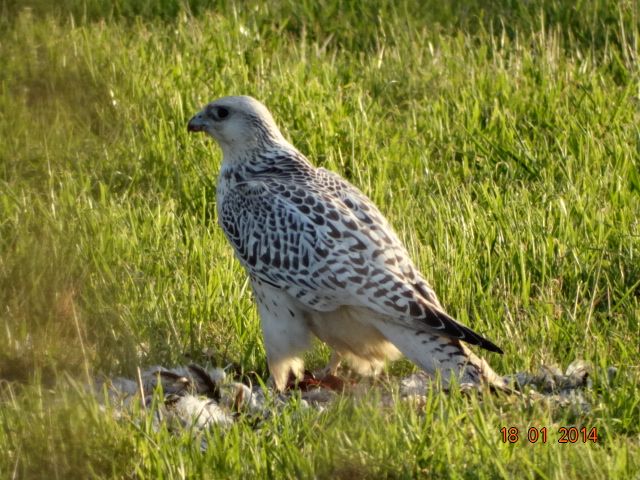 It seems likely that this is the same, wandering individual responsible for sightings on the Iveragh Peninsula at Ballinskelligs on 19th November, and later at Ferriter's Cove and Dunquin, at the western end of the Dingle Peninsula, on 24th and 28th November respectively. As the Gyr flies, Fenit is only 60 kilometres from Ballinskelligs but, with hundreds of miles of suitable coastline between the two and only a handful of active birders, it's easy to see how this bird could have gone missing for so long. And that's not mentioning the fact that Gyrs are notoriously wide-ranging, often pitching up in a particular spot only briefly before moving on again — you only have to look at records from the Outer Hebrides and Orkney in recent winters to realize that.

With no shortage of high cliffs and expansive, waterbird-filled estuaries around its coastline, County Kerry really provides the perfect cocktail of habitats for a Greenland Gyr to spend the winter in. Unsurprisingly, the county can boast 14 accepted records up to and including 2005, with at least three reports since then. Most famously in recent times, a bird found aboard a French trawler c.15 km west of the Blasket Islands on 25th November 2008 was kept on board (and fed chicken!) for a few days before being released again, only to be found back on the boat soon after. The bird was taken in to care in Killarney at the end of November and rehabilitated but, on 7th December, an unsuccessful release attempt saw the bird taken back in to care.