The remnants of Hurricane Gonzalo reaching our shores meant one thing for most birders — the possibility of American landbirds. But for me it meant more than that: I'm based in Gairloch in the northwest Highlands of Scotland and work at sea with Hebridean Whale Cruises, so it meant no work for the week. As such, the decision was Orkney or Lewis for some land-based birding, for a change. The only problem is that I don't drive, so public transport is essential! I went to Orkney for the Sandhill Crane in 2009 and it was difficult to get around, so I decided on the Butt of Lewis.

I was hoping for Gyr Falcon, one at the top of my hit list as I'd missed them on several occasions, so the plan was to get on the ferry from Ullapool on the Wednesday morning as I knew it wouldn't be sailing on the day Gonzalo arrived. I'd done some research on places to stay within walking distance of the Butt and the Decca B&B sounded perfect with Loch Stiapabhat Nature Reserve just over the road.

The ferry crossing was in very poor conditions; rain and a big swell! I managed decent views of a Leach's Storm-petrel and all four skua species. I arrived at the B&B in the late afternoon in torrential rain and gale-force winds and decided to get up early and get to the Butt for first light on 23rd. The owners of the B&B informed me that it was film night and a few locals would be joining us for our evening meal and one of them was a local birder! Chatting with Tony Marr over dinner, his recent sightings left me eagerly awaiting the morning. The weather forecast was pretty bad for the morning, but improving throughout the day.

After the two-mile walk lit only by the beam from the lighthouse, it was still pitch black when I arrived at the Butt. Winds were gusting to gale force and regular, with quick showers. I cowered behind the perimeter wall and prepared my camera with a 500 mm lens plus a 1.4× converter and added much-needed extra layers and waterproofs! First light sort of appeared at 07:30 so I gingerly went west from the lighthouse to find the best view of the sea and the two stacks about 50 metres offshore, which was very dangerous in hindsight and certainly not recommended in those conditions! I was very exposed to the elements, but the view was superb for seawatching and scanning the stacks. 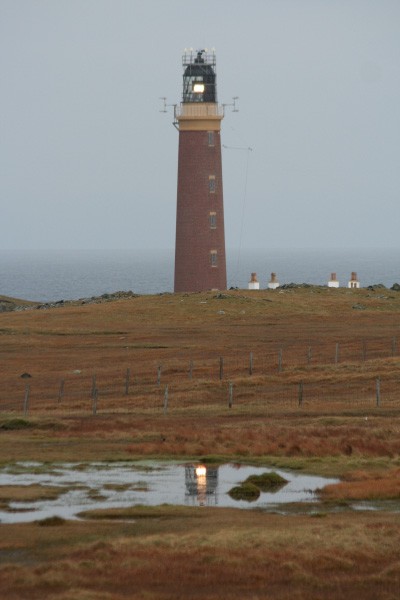 There was lots of seabird activity, with swathes of Gannets and Kittiwakes feeding about 2 km out (just out of range of my 8×42s to pick out any Sabs, etc.) but plenty of skua action kept me entertained. The stacks were turning up mobs of Twite, Starlings and Hoodies. Unfortunately the wind chill was starting to kick in and by 09:30 I was starting to shake, so I made the decision to pack up and leave. Once past the extremely dangerous north path around the lighthouse I had a change of heart and searched for a depression on the cliffs just east past the lighthouse car park where I could shelter from the wind and the rain. I found an excellent site with a restricted view of the sea and only the nearest stack, but I was comfortably warm!

The seabirds were still too far out and I started scanning more inland and then sitting back down in my wee depression to warm up again. Then, while lying horizontal (!), I saw a swift flit around the near stack and head straight towards me with an unusual flight pattern. Was this because of the wind speed it was flying into? Wait a minute, what is a swift doing here a) at this time of the year and b) flying in from the Atlantic? Panic ensued! Binos or camera, binos or camera — I'm sure many others have faced this dilemma!

I decided on camera, hurriedly unwrapping it. Standing up trying to find the swift through the viewfinder was no mean feat in the gusting wind, not to mention with the bird's erratic flight. Nevertheless I managed six shots before it flew past the lighthouse and out of sight to the south. Once I was sure it wasn't going to return I viewed my shots on the back of the camera: only four were in focus but they were all so dark and only in silhouette! Then I checked my settings and realised that in my fumbling attempt to grab the camera I'd knocked the exposure compensation dial down negatively a couple of stops and with the already poor light the images seemed inconclusive. I was gutted because it was obvious this was no typical Common Swift! Camera before binos meant I didn't have a great look at it but I knew it was all-dark with a lighter patch on the throat, much stockier than Common and with a short square tail. I'm no expert on swifts but I knew it wasn't a Pallid or Little Swift either, so perhaps a Chimney or, like the York bird, a weird-plumaged Common so I decided not to report anything until I could analyse the images. 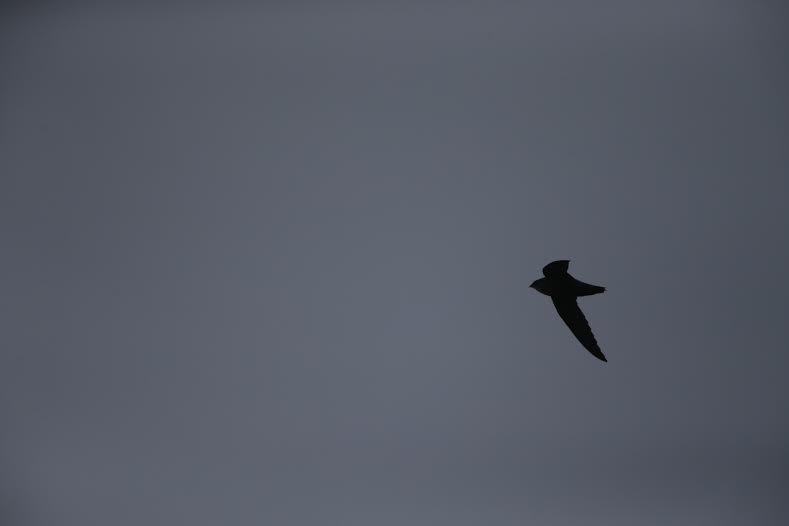 One of Nick's initial Chimney Swift photographs taken at the Butt of Lewis on Thursday morning (Photo: Nick Davies)

I batted it out until 12:30 in case it returned before hunger and cold made me start the plod back to base. Five minutes down the road I met Tony Marr on his way down to patrol one of his patches, so we had a chat about the morning's events. Tony mentioned that he had recorded Common Swift in November before, so I started to doubt my swift as it may have been hypothermia-induced delirium!

I had no way to check the images as I had travelled light; the owners of the B&B were out all day so I spent the afternoon down in the hide over the road — it was here that the incredible coincidences started! At 16:50 I was scanning over 400+ Golden Plover in the field next to the B&B without much success as I didn't have a scope, when I noticed Tony walking back to his car, also from the hide. He saw me and wondered if I was on anything. We had a quick chat and he began walking back when it happened again: the swift was over the field!

He turned back and it flew straight past us and he immediately called "Chimney"!

We lost it over the opposite field and got his book out and it looked good for Chimney. The owners of the B&B arrived back and we asked if we could borrow their laptop and they willingly agreed. One of the images we enlarged and we could clearly see the 3 projecting spike feathers beyond the tail — the Eureka moment! With a roar and much hand-shaking Tony started the reporting process off while I went back outside armed again with my camera. I was also on my phone contacting BirdGuides when it returned. It was searching for a roost around the eaves of the B&B, and was generally too close to focus on with the camera! Before I'd called everyone out it disappeared again but returned at least twice before (and possibly once after) dark — had it roosted at the B&B? 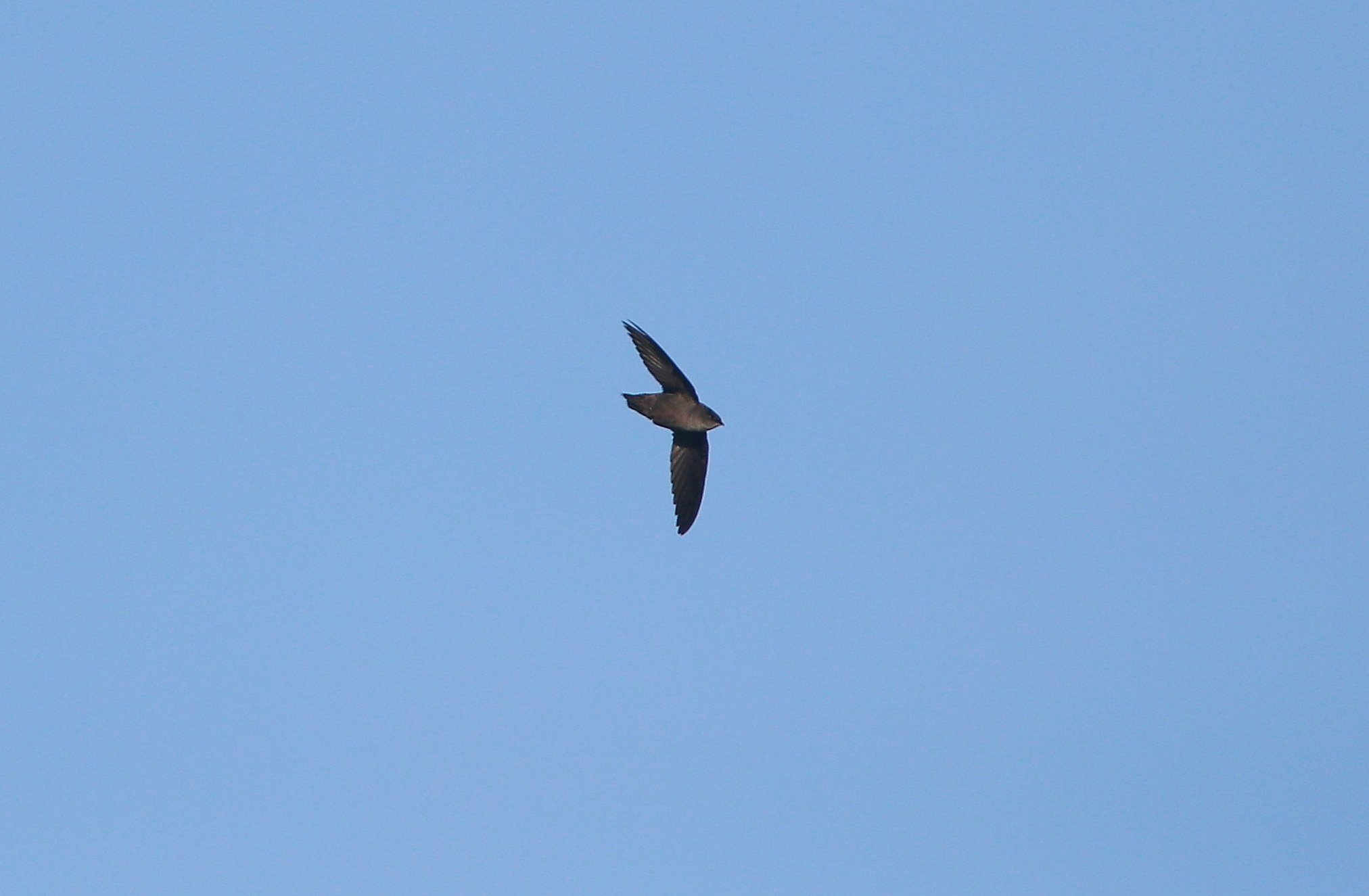 I was up before dawn and ready and waiting for it to pop out of the eaves, as was Tony. At about 09:00 we were joined by two more birders, one of which who'd been at the Yellow-billed Cuckoo in Cornwall the previous afternoon! It was a truly epic effort from Dan and Phil to get to Lewis and we hoped that they'd be rewarded. They had a cut-off point of 12:00 to head back for the ferry, but there was no sign by then. They kindly offered me a lift to Stornoway and we set off for the boat but five minutes into the journey Dan had a call from Tony to say that a swift had been spotted over Port Nis, a mile away from the B&B. It had to be the Chimney so in true Mika Häkkinen style we raced to the site and — bingo — there it was, feeding over fields in all its glory and in great light. I was pleased to see it acting naturally and even happier for Dan and Phil — it was also Phil's 500th British species, so a double celebration there. 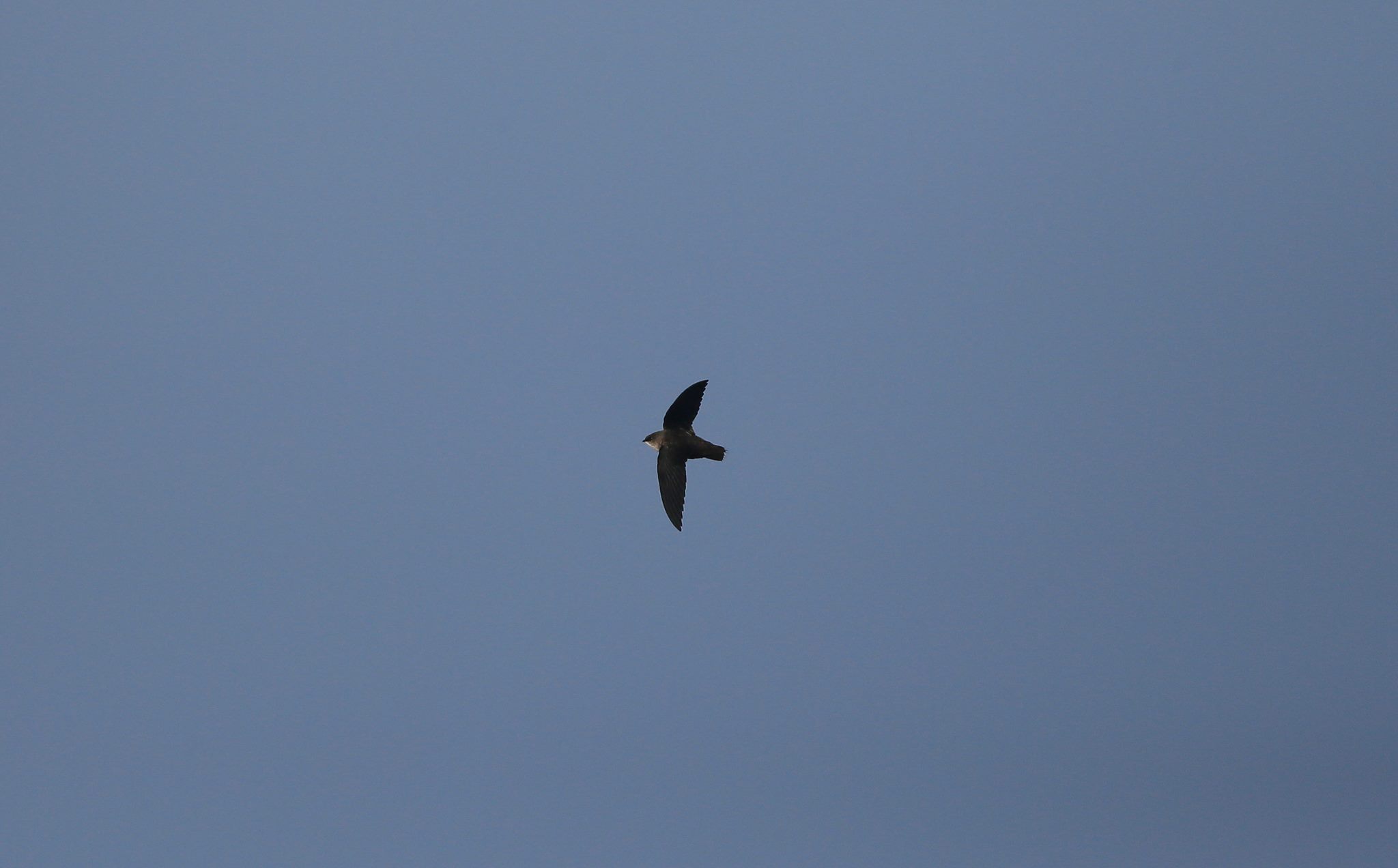 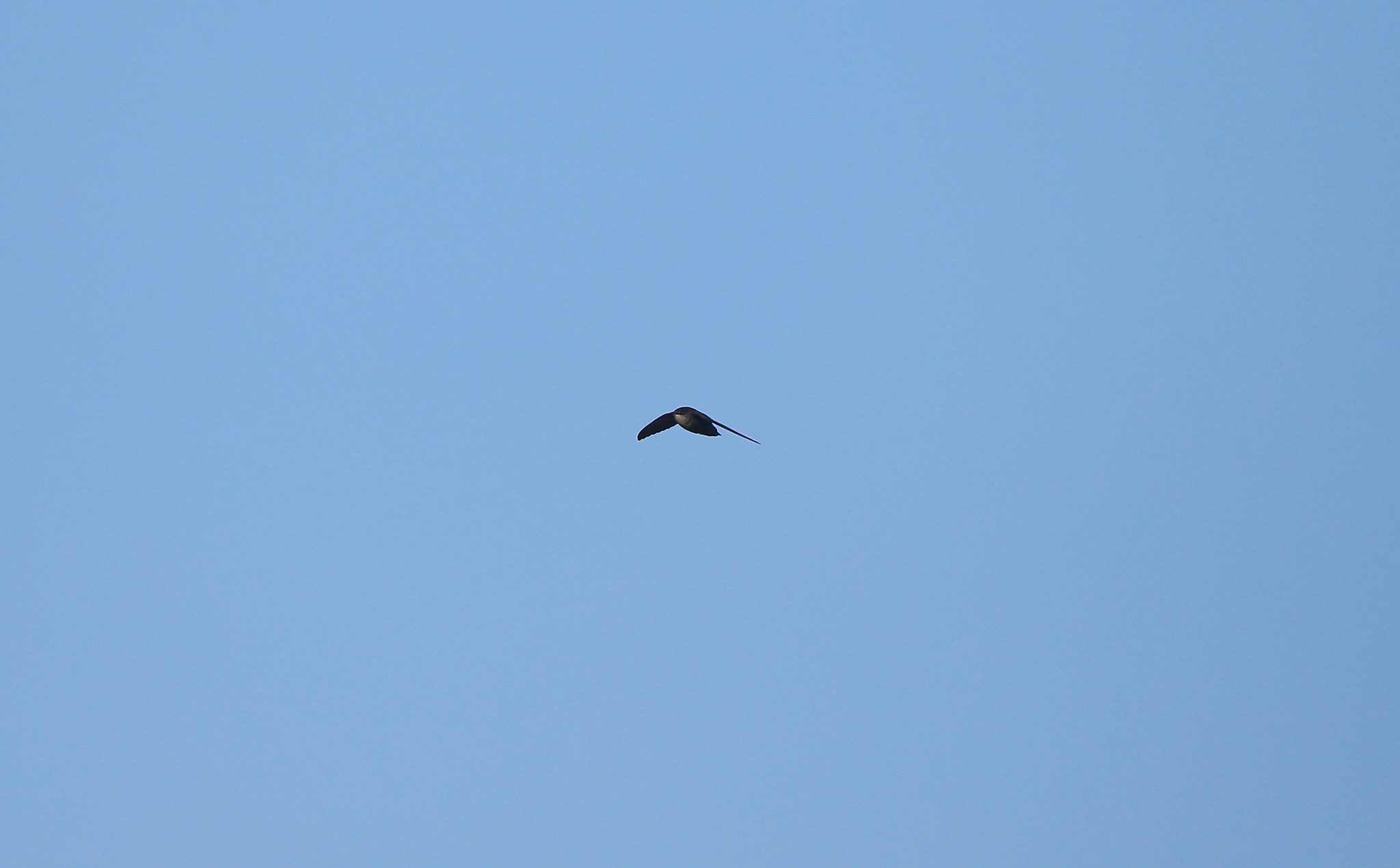 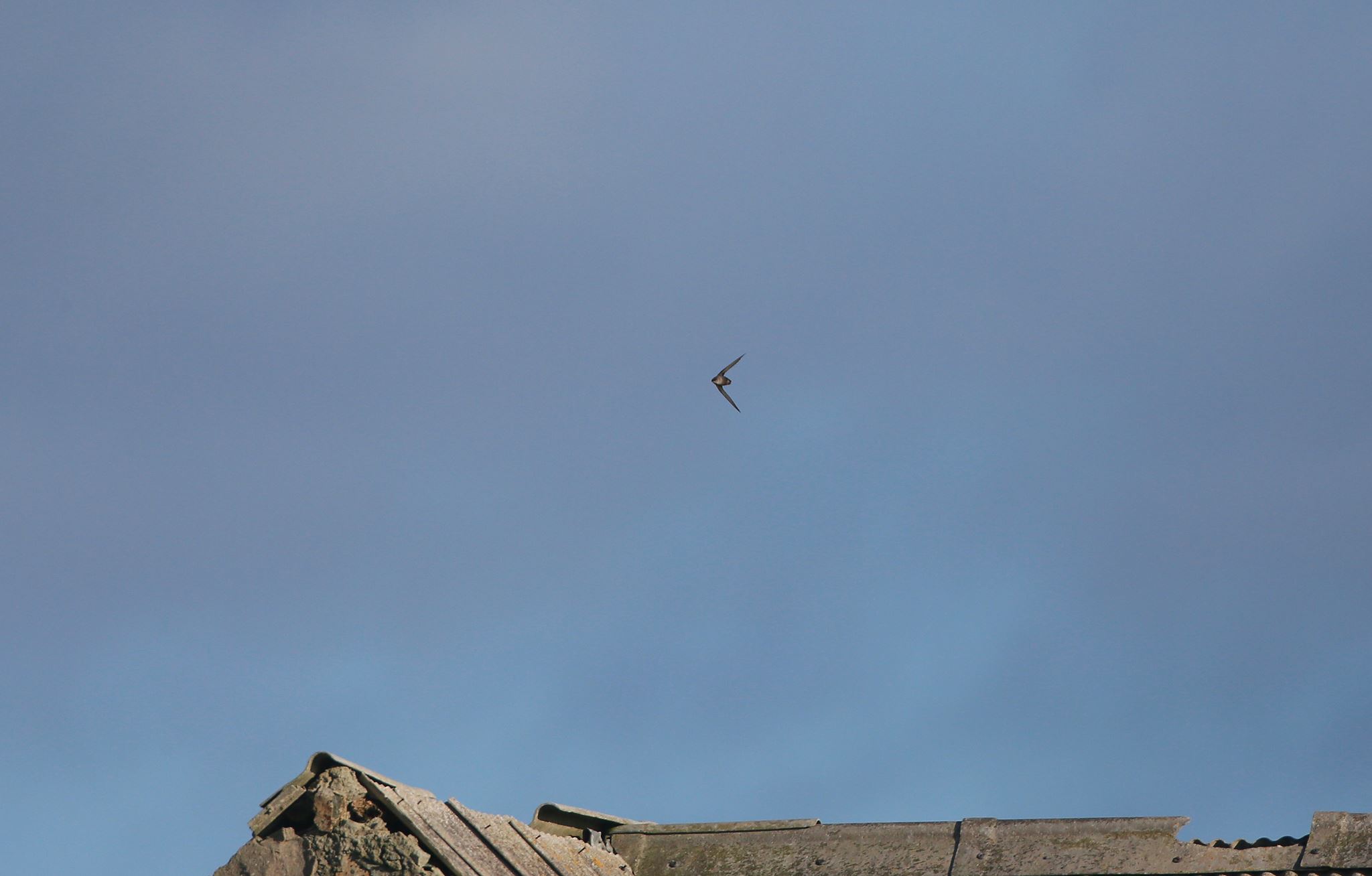 The swift was seen again briefly on Saturday afternoon but conditions were challenging to say the least and it has not been observed any further.