The biggest element in finding a rare bird is surely luck. Perseverance, local knowledge, experience, identification skills — they all play a part — but at the end of the day you have to be in the right spot at the right time when the bird is showing. On 23rd October, after being away for a few days, I decided to walk round Baltasound rather than drive to the north end of Unst; I decided to head towards the school, instead of heading to Halligarth first as I would usually do; and after checking the lone tree in the Manse garden I stopped for a chat and glanced across to the lone tree again, and noticed a strange-looking bird which definitely required a closer look. Such was the chain of fortune that led to the discovery of a second for the Western Palearctic... 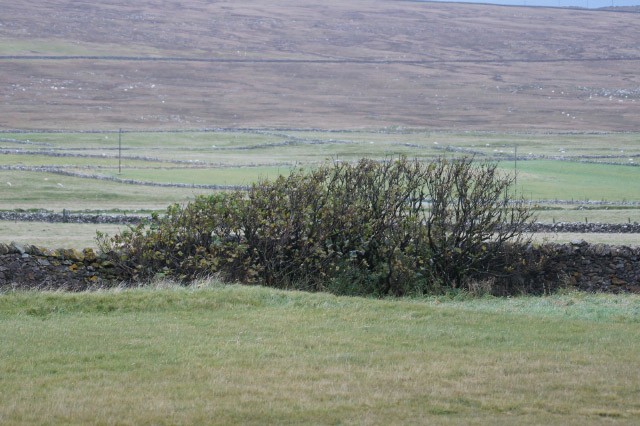 The lone sycamore in the Manse garden at Baltasound, where Mike first saw the bird (Photo: Mike Pennington).

I was chatting to another local birder, Dick Foyster, discussing the day's obvious arrival of thrushes and Blackcaps, when I first saw the bird. From a distance the bird looked vaguely Phylloscopus-like, but it had a big pale patch on the wing. I suggested to Dick that we needed to have a closer look, so we strolled along the road towards the corner of the garden. The bird appeared again on the outside of the sycamore. Incredulously, I realised that this was something extremely interesting: "that's an American wood warbler!" The bird was on view for a good 20 seconds or so, long enough to realise what we were looking at and take in the most obvious features. This was, however, my best view of the bird for the next four hours!

Over the next hour the bird showed fleetingly in the lone sycamore. Dick had to leave as he had people coming to do work at the house. My phone had no signal. My only attempts at taking a photo had captured some out of focus leaves. I could get very little more on the bird. Then it left the sycamore and headed to a small patch of nettles. By the time I got there, there was no sign of it. I returned to the sycamore — no sign. A bird flew past and I chased it — it was a Blackcap. Two more Blackcaps were chased down. It looked as though it had gone and I still had no photos and only a cursory description. 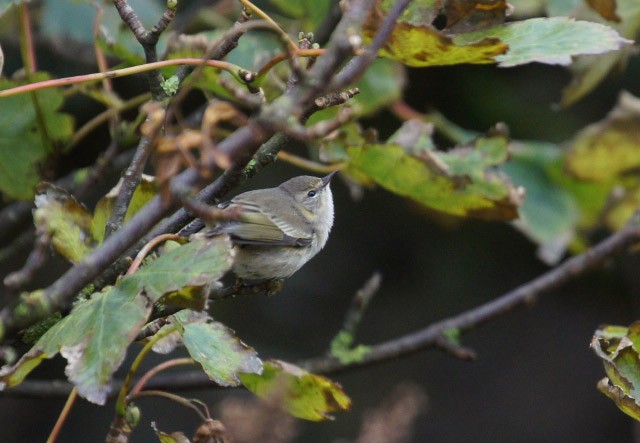 I've never been in this situation before, but faced with a Setophaga (they're not Dendroica any more, remember), and one without obvious bright colours on it, my thoughts have always been start with Blackpoll Warbler and work from there. Some of the features seemed good for Blackpoll: streaked underparts, fairly plain face, two wing bars, pale tertial fringes, white undertail coverts, some white in the tail. But the wing bars seemed odd — from a distance they looked more like a pale wing patch. And Blackpoll tends to be a brighter bird, whereas this was a very dull greyish colour. There was something of Yellow-rumped Warbler in the plain face and streakiness, but there seemed to be no obvious yellow in the plumage (I hadn't seen the greenish rump or yellowish primary fringes at this stage). The bird did remind me of Cape May Warbler, which I had seen in Cuba. But surely not — I knew that there was only one British record and that was in spring. It seemed that I might have something really, really good, but I still didn't have enough to be sure.

I decided to check the lone sycamore in the Manse garden once more before widening my search, and to my relief the bird had returned. This time I was determined to get photos as most views so far had been too brief to get any more detail than I already had. Eventually I grabbed a few poor photos in the worsening weather — it was definitely getting foggier all the time — before the bird left the sycamore and headed determinedly towards the old church at Hillside. The photos revealed one feature I had not yet seen in the field: a bright green neck patch.

At this point my wife Margaret arrived after Dick Foyster had phoned her. She brought two vital items — a copy of Sibley and a mobile phone on another network. I looked through the field guide. Could it be a really dull Blackpoll with dark legs? Check the other species. Nothing fits. Except my long shot of Cape May Warbler — there was that greenish neck patch on a dull greyish bird! This was a big, big call and I really, really wanted someone else to see it. I was pretty sure it had to be a Cape May Warbler, but it was massive leap of faith to actually believe it!

I phoned Brydon Thomason who was on his way back home to Unst, but would not be back for over an hour. Then I phoned Paul Harvey and told him I had a Dendroica (yes, I know I should have said Setophaga!). As Paul was Shetland year-listing I knew he'd come even if it was 'only' a Blackpoll, but I asked him how I would separate Blackpoll from Cape May Warbler. Mantle and leg colour were suggested. Dark legs and plain mantle pointed towards Cape May Warbler again! We decided to put out news on the local grapevine, without a definitive identification for the moment, to give people the chance to come for it. I decided to try and relocate the bird and stay with it until help arrived.

Margaret and I headed down to the old church at Hillside, where there is a small garden holding three sycamores. We saw the bird almost immediately, but it was as furtive as ever, mainly revealing itself when chasing off a Chiffchaff and a Blackcap that dared to enter the trees. Just before Brydon Thomason arrived, though, it started feeding off the walls around the small garden. This meant that Brydon got good views and more photos almost as soon as he got there. The bird even started calling in flight — a sharp 'tsip', almost reminiscent of Song Thrush or a rare bunting. Brydon had also brought a copy of Kaufman (which depicts a very dull Cape May Warbler) and he too went through the process of elimination via the field guides. Conclusion, it had to be a Cape May Warbler! 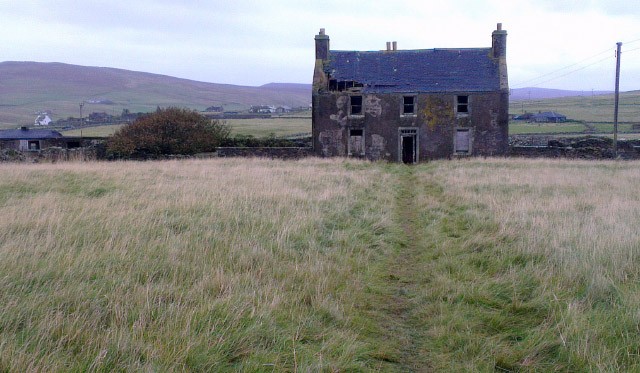 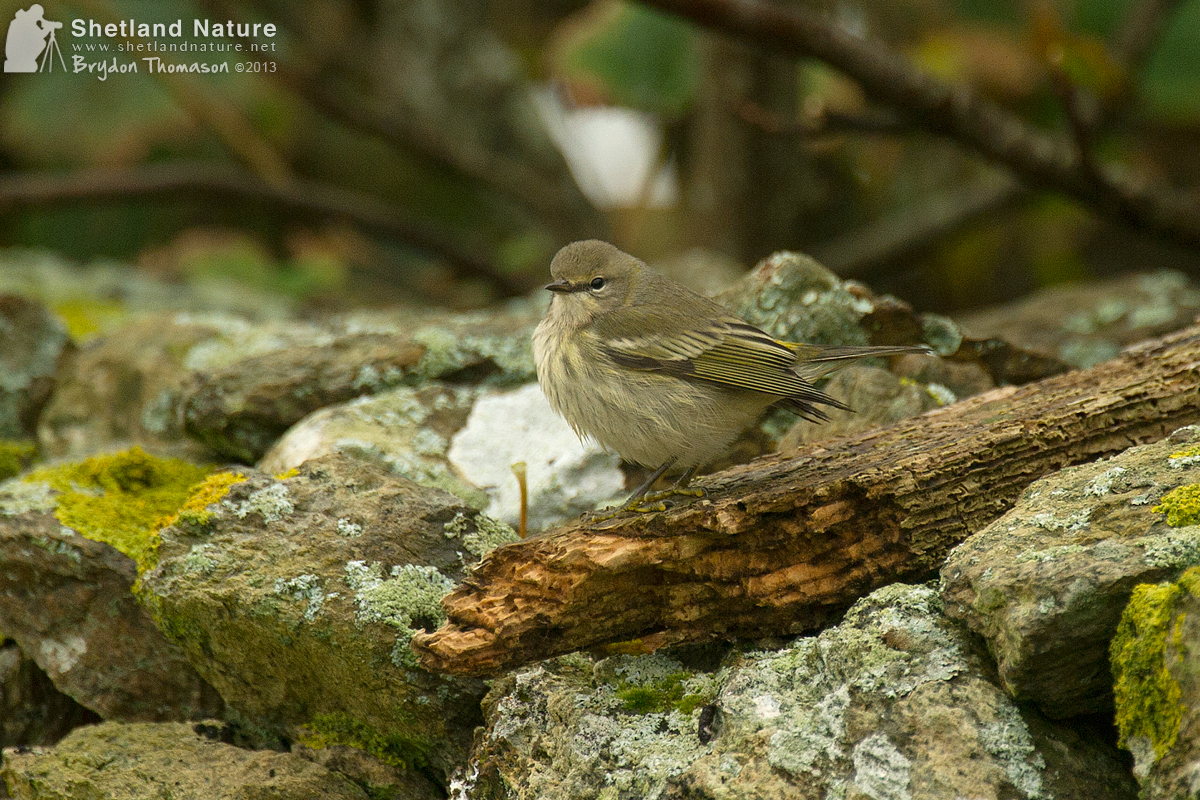 Now that it was conclusively identified, the bird suddenly decided to stop hiding and started feeding along the wall behind the sycamores. Whereas I had never seen it perched for more than a few seconds before, it now sat in full view on the wall. It was only now that I finally saw the bright greenish rump and the yellowish fringes to the remiges, but we could also see the greenish neck-patch, which was only visible at some angles, and the broad fringes to the greater coverts that produced the wing-panel that was so obvious at distance. 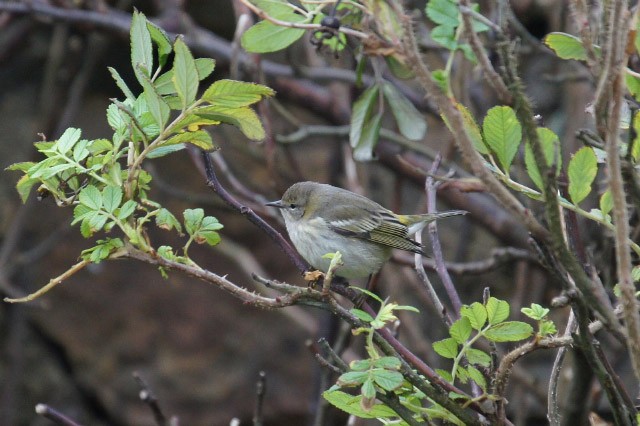 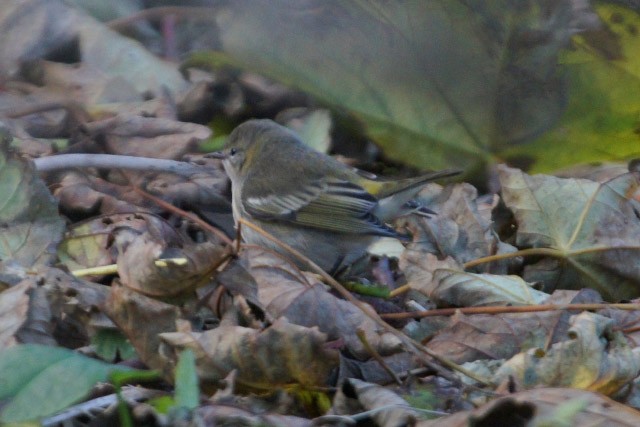 In the strong winds on Thursday, the bird spent a lot of time feeding on the ground beneath the sycamores in the sheltered garden at Hillside (Photo: Mike Pennington).

Paul Harvey and a few other observers arrived soon afterwards, and about 20 or so people made it up from Mainland Shetland before dark. The next day more than 60 people saw the bird, with the highly novel sight of five aircraft parked together on the apron at Baltasound airstrip! By the end of the weekend (27th October) I estimate that at least 200 people had seen the bird. 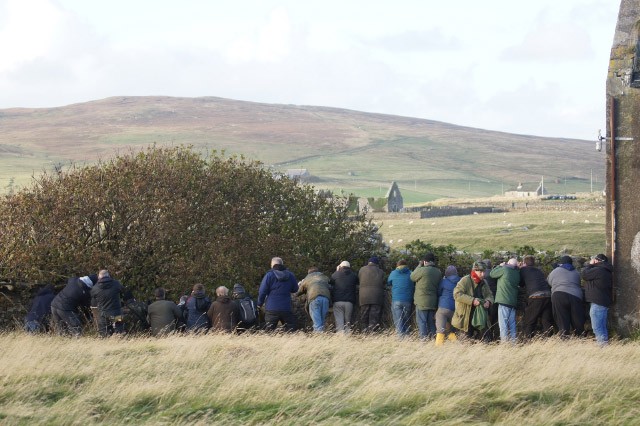 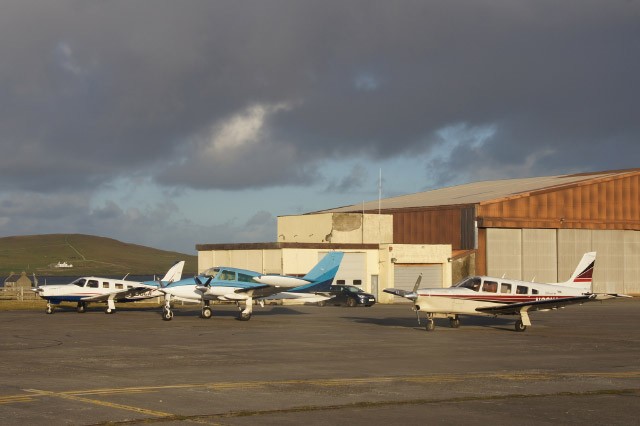 Unst airport has rarely been so busy! (Photo: Mike Pennington).

It was only after it went dark on the first evening that the enormity of the find sank in. This was not just a second for Britain, but it was only the second for the whole of the Western Palearctic. This is a species that has not even turned up in the Azores. This is a species that has never been found in autumn anywhere on this side of the Atlantic, the previous British record involving a singing male in spring, found by Tom Byars and Iain McDonald in Paisley Glen, near Glasgow, on 17th June 1977. It may not be a first for Britain, surely every rarity-finders' Holy Grail, but this was just as good in my eyes.

Ironically, this bird would have been on my local patch if I had got round to entering the Patchwork Challenge, but I never got myself organised. I have been keeping a list and have been thinking of joining next year, but with a Cape May Warbler (and Brydon's Baltimore Oriole from September) means that 2014 might just have too much to live up to! 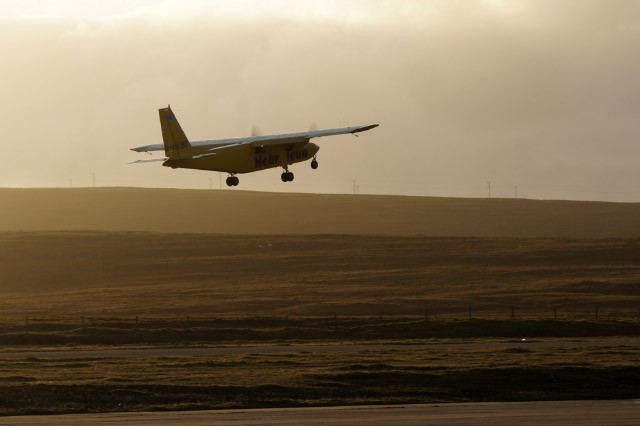 Finally, a thank you for the good-natured manner of the visiting birders and for following the advice put out via the Nature in Shetland website. Unst has not seen anything like this before and most residents actually enjoyed the novelty of the occasion. But there is a way of further showing your gratitude for the hospitality enjoyed by many birders in Shetland in recent years. We may not go around rattling a donations tin, but there is a modern alternative, and Shetland Bird Club has set up Just Giving page to raise money for MacMillan Cancer Support (http://www.justgiving.com/Shetland-Bird-Club). So, if you twitched the Cape May Warbler, or the Pine Grosbeak, or the the Thick-billed Warbler, if you came for a birding holiday, if you enjoyed a warm welcome, exemplified by the friendly sign at the Mid Yell Subalpine Warbler, please consider showing your gratitude by supporting this charity, which does sterling work in Shetland.