Over the festive period we tend to spend Christmas with my parents in north-east Scotland before travelling to Catalonia to spend New Year and the Festival of the Three Kings with my wife's family. Rather fortunately for me, my wife is from Deltebre, a town in the centre of the Ebro Delta — quite simply one of the greatest places to watch birds in Europe. The thousands of waterbirds are the obvious attraction but, with the Delta projecting 20 km out into the Mediterranean, migration periods can also be fantastic for passerines and raptors with falls of flycatchers and warblers, flocks of European Bee-eaters and a nice assortment of Mediterranean scarcities. The Ebro Delta Natural Park bird list is well over 300 species, but this is probably more an indication of the site quality rather than a high number of local birders. Indeed, there are large areas that receive little or no coverage, providing plenty of opportunity for finding interesting birds. Even in January there can be some quite unusual birds around — species you do not associate with winter in the northern Mediterranean such as Black Stork and, one year, even a Tawny Pipit.

I don't really have a current local patch in the UK, but the Delta serves rather well when visiting Spain. Although we tend to only visit a couple of times each year, my Catalan 'patch' list is now approaching 170 species, with the highlights until recently including a Long-billed Dowitcher back in 2011 and a beautiful Little Crake found by my wife (her proudest birding moment). However, these great birds were somewhat overshadowed by a very unexpected visitor first seen on New Year's Eve 2014 …

We had arrived the previous evening and, since the weather was good, I decided to go for a morning walk along the Ebro river. Although there's slightly less interest in the orange and olive groves at this time of year compared with during migration, there are always interesting birds to be seen — incredible numbers of Common Chiffchaffs, big flocks of Tree Sparrows, plenty of Black Redstarts, singing Sardinian Warblers, European Serins and Zitting Cisticolas (or trists, to give them their more evocative, onomatopoeic Catalan name). Furthermore, there are still several supposedly common winter visitors that I haven't seen on the Delta yet. For example, I saw my first Deltebre Sparrowhawk and Great Tit only last winter, and I was hoping to perhaps add something like a Blue Tit or Goldcrest to my list. 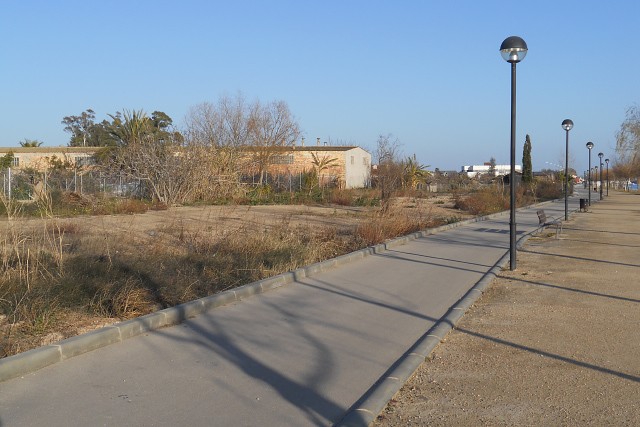 Even before the main event, I'd really enjoyed the walk. Although chilly, it was great to be out in the Mediterranean sunshine. All the usual species were present and active in the cool of the morning — including my second Delta Great Tit — but the highlight was a flock of Common Cranes flying over — another patch second. I was heading home for lunch when something different among the sparrows caught my eye.

The bird was clearly a shrike and, given the time of year and the fact that it did not look like a standard Red-backed, it definitely warranted a closer look. As it was midday, the light was pretty bright but the bird looked very dark and the head was very strongly marked. The mask was much blacker than on a typical female or first-winter Red-backed, and I could see that the lores were fully black. The supercilium was strikingly white. The bird also appeared to have a substantially longer and thinner tail than in Red-backed. In addition, I could not see any white in the wing or any obvious red in the tail that would have suggested Turkestan Shrike. For all intents and purposes, the bird looked like a Brown Shrike. 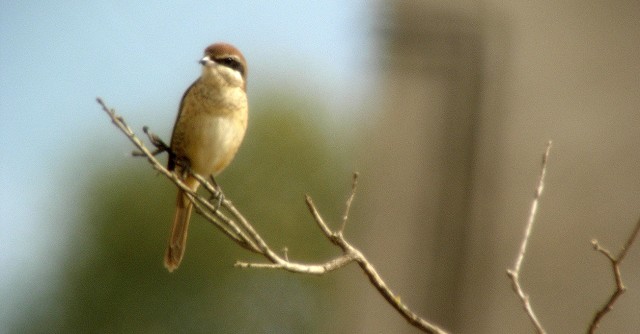 I saw the bird for less than two minutes before it disappeared, and I could not relocate it for the rest of the day. I sent my brief description to friends in the UK, including Mark Lewis, who agreed that it sounded like a Brown Shrike but that my description was pretty sparse and I certainly didn't have enough for the record to be accepted — especially as Mark had confirmed that it would be a first for Spain. All I had was a dark brown shrike, which appeared very long-tailed with striking facial markings.

I tried to pass my description on to Natural Park staff but, not unreasonably, everyone was on holiday. With no one to relocate the bird with, I started to doubt what I'd seen. I guess we don't normally have to 'contend' with such bright sunshine when finding rarities in the UK, so I started to wonder whether the bird really was so strongly marked or whether the bright light could have stopped me from seeing features, such as red in the tail, that could have suggested Turkestan Shrike.

I searched extensively for the bird over the next week, spending more than 15 hours looking — which was all the time I had available between family commitments. I'd pretty much given up hope when, on 6 January, our last day in Deltebre, the bird reappeared in pretty much the same place. This time it was present for about 30 minutes, although it showed only intermittently. However, at one point it caught a large insect and showed really well on the ground, fully out in the open, and at a distance of just 10 metres. 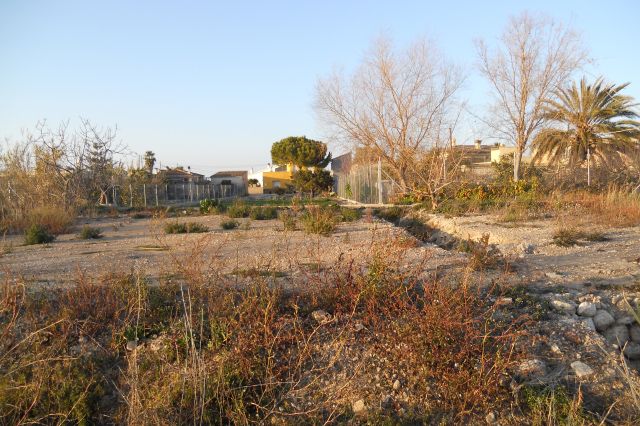 The shrike could be extremely elusive in the tangled vegetation of the fields and gardens along the Ebro river (Photo: Ricard Gutiérrez)

I was able to confirm the features I'd seen before: the strong head markings, dark brown colouring, lack of white in the primaries or red in the tail. I also managed to see other aspects of the bird that weren't clear on the first viewing. The outer tail feathers were noticeably shorter than the central tail feathers while the underparts were a warm buff colour with fine brown vermiculations on the flanks. I was desperate to get some photos of the bird but without my DSLR (we have too many presents to carry at this time of year), all attempts with my compact were rubbish; only the most generous of viewers would even consider the photos to show a shrike! Despite the lack of photographic evidence, with the help of Mark Lewis and BirdGuides, the information was passed on to Ricard Gutiérrez at Rare Birds in Spain.

Finding a national first should be a really exciting experience, but I confess I found it quite stressful. Even though I was happy with the identification, I kept trying to work out how I could be wrong. Before this sighting I'd never seen Brown Shrike or either form of Isabelline Shrike, and I was coming to realise how much more enjoyable it is to find a rare bird with friends when you can share the identification and, I guess, the potential reputational liability of any terrible mistake.

Over the following week, Spanish birders searched for the bird with no luck, with some people travelling long distances to look for the bird. While at least some people believed me, including Ricard, a single observer record of a national first from a foreign birder was never going to be accepted, and was probably considered to be pretty dubious by many people. However, after I'd again given up, the bird was finally relocated on 9 February by Ricard and Sergi Sales close to where I'd first seen it, some 40 days earlier. The identification was confirmed, and a couple of days later the first really good photographs of the bird started to appear. I could finally relax. 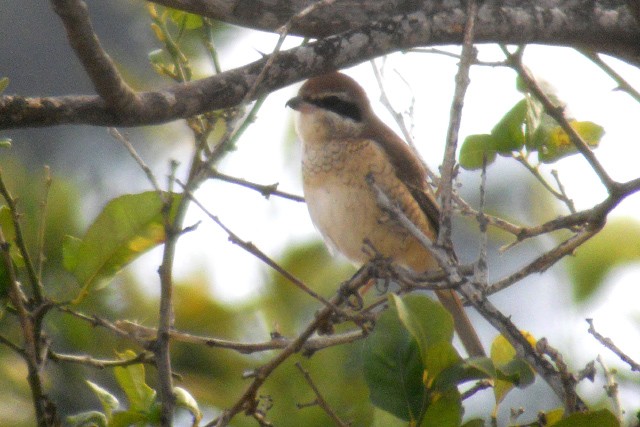 Since the bird was relocated, it has been seen by several hundred people from as far afield as Asturias (which is a pretty big twitch in Spanish terms), and it has even appeared on Catalan TV and radio. My in-laws remain pretty bemused by the whole thing and could not understand what a small brown bird was doing appearing on TV3 news. Oh, and I did eventually see a couple of Goldcrests, so my patch list continues to grow! 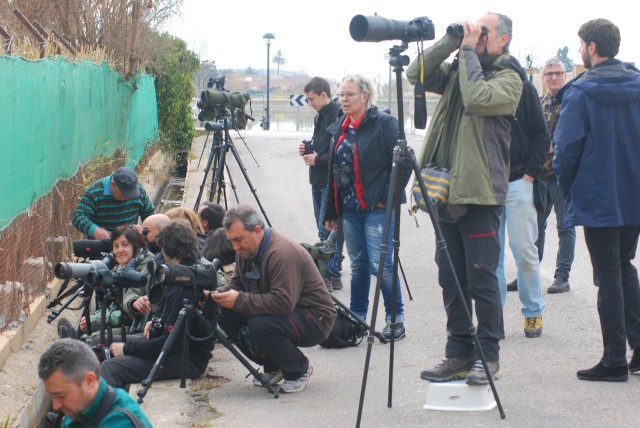