This autumn saw eight of us (seven from Kent and one Sussex birder) spend a week on St. Agnes on the Isles of Scilly. After a good, but largely uneventful, week we took the 10 o'clock boat back to St Mary's on the morning of Saturday 19th October. Myself and three others were due to leave on the chopper later that afternoon while the other four were due to return on the Scillonian.

The four of us went directly to the airport to enquire about getting an earlier chopper off the islands; the impending strong winds and lack of new birds the basis for our decision. Fortuitously, there were no earlier seats available, so we checked in our bags and decided to have a look for the Isabelline Shrike present nearby. After a fruitless runaround looking for the shrike, a late breakfast seemed like the best option! As we finished our 'birder's brekkie', news came through that the shrike had been refound near Porthellick, so off we went in that direction. The bird performed well but unfortunately I was caught ill-prepared and missed out on getting any photos before it flew along the beach and up the slope on the other side. I decided to go and find a decent vantage point and see if I could relocate it. I headed up the path from Porthellick towards the airfield, and found a suitable place to view from. Initially I checked the adjoining field, where there were a few Song Thrushes and Blackbirds, plus a Whinchat showed somewhat more distantly as I checked the bracken and brambles further afield in search of the shrike, but with no success.

It was then that I then noticed a birder heading down through the fields above me, from the direction of the airfield. As I was watched to see if he flushed anything I was distracted by a lone thrush in the field next to me; the bird was facing slightly away and I was immediately struck by its pale underparts and pale secondary panel. I couldn't believe it, it couldn't be, then it turned face-on and any doubts I tried to instill were instantly dispelled as it revealed a monster of a black throat - it was a Black-throated Thrush!!! 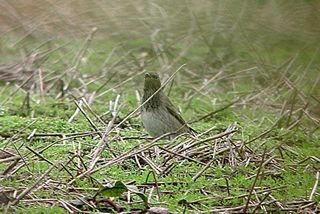 My first reaction was to grab some shots as, rather fortuitously, my digital camera was still attached to my scope. The first two or three shots were a little blurred, but then I managed to compose myself and get a couple of better shots. Satisfied that these shots would quieten any doubters in case it disappeared, I started waving (without trying to spook the bird) at the birder who was heading towards the field with the Black-throated Thrush in it. As he raised his bins in my direction I pointed into the field and made a gesture something akin to stroking an imaginary long beard (meant to indicate a 'throated' something)! He obviously got on the bird immediately as he gave me the thumbs-up. I then started to call round the lads and inform them of my find. Just then some birders were walking along the path towards Salakee Farm. I called down that I had a Black-throated Thrush. Initially they looked a little blankly at me, but I think the added expletive when I repeated my initial statement helped it sink in and they were ecstatically watching it within seconds, and news was broadcast over one of their CBs. The bird then took flight and landed, rather distantly, at the back of a grassy field beneath the runway. Luckily the grass wasn't too long and the bird could still be watched as it fed.

Very soon over 100 people were watching the bird, though unfortunately the early sailing of the Scillonian meant that a fair few birders missed out, with only Lee Evans managing to jump ship just as the gangplank was being raised! The bird then had a little fly-around with a couple of Redwings, and rather obligingly it flew back into the original field and showed very well for the appreciative crowd. It fed here for about five minutes then flew up into some pines. I left at this point and understand the bird flew off over the airfield at 14.35, having been on view for just over forty-five minutes in total - which was nice for the assembled crowds.

Nationally, there have now been just under 50 accepted records of this beautiful thrush. Records were almost annual during the 1990s, with several crowd-pleasers lingering for extended periods. On the Isles of Scilly there have been four previous records, all in October, with birds in 1982, 1987, 1992 and 1993 - Eds
Written by: Marcus Lawson, Kent