It is now 17 years since our 'team' started spending our autumn holidays birding on Barra (see Birdwatch 135: 20-21). We log all our sightings, but the main focus of our visits is to try and find rare and scarce birds, and it has given us some great results. While a large element of luck is involved in any find, being in a good location at that time of year definitely improves our chances. However, there is no getting around the fact that a lot of time and effort is spent searching sites and patches of cover, usually without reward. This year, most of us arrived on 29 September, with the first two weeks dominated by westerlies and regular rain. Although there were relatively few migrants on the move, we had seen Isabelline Shrike, Blyth's Reed Warbler and Pechora Pipit – avian vagrancy is not always easy to rationalise!

The weather improved somewhat in my third week – still windy, but less wet – and on Wednesday 17 October I ventured north from our new base at Bolnabodach. I had checked the gardens of Croft 183 and of the first cottage, Aros, with nothing to show for it except the usual few European Robins, Eurasian Wrens, Blackbirds and singles of Song Thrush and Chaffinch. Next was Northbay House garden, which is often a trap for migrants, and after nearly an hour (going around three times) I had added a few Goldfinches, two Common Chiffchaffs, at least two Blackcaps plus Goldcrests, 14 Redwings and a Fieldfare. Things were looking up! Iain English arrived and after telling him what I'd seen he headed south. I made one last check of the small orchard at the back – nothing new.  I started to head away towards Northbay and the prospect of twitching a couple of Yellow-browed Warblers at Aird Mhor.

As I walked down the drive to leave I had one last look back – a very lucky decision. A bit distant, but gleaming in the sunshine was a fairly slim, orange bird perched near the top of the ash tree. A quick check that it wasn't a bright leaf – it turned its head, it could only be … and then panic set in. 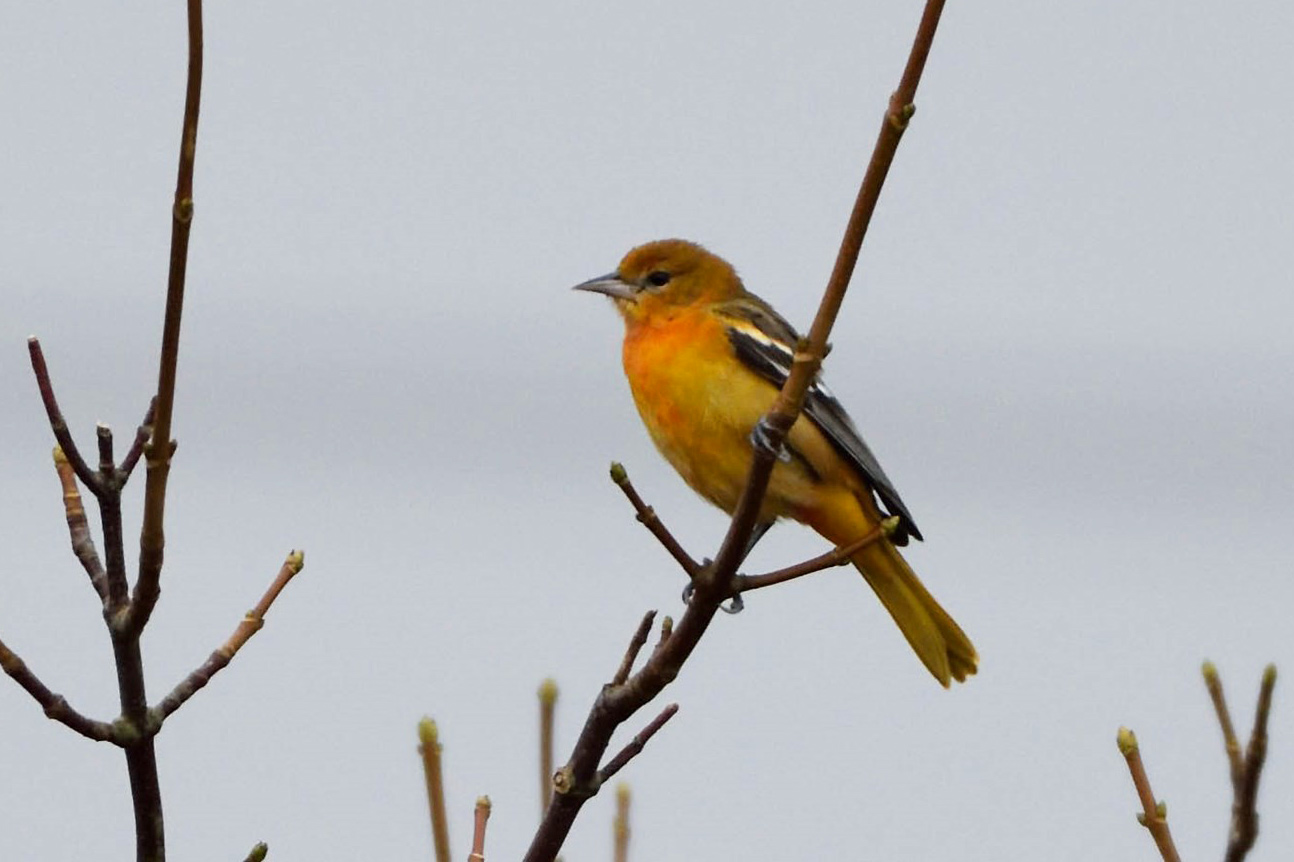 Barra has a lot of mobile phone coverage blackspots and we all now use cheap short-wave radios – great, except nobody was within range. I checked my Vodafone – no signal. Luckily the Orange network (somewhat appropriate!) had been restored after being out of action the first 12 days because of damage to the mast, and bars were starting to appear on that phone. Having sent out texts about a Baltimore Oriole, I looked up to see the bird had gone – a classic schoolboy error. There was still no sign by the time Iain and the rest of the island birders arrived, and we were waiting for Mark Oksien to shut down his mistnets at Creachan (of Scarlet Tanager fame) before trying to locate the bird again – it seemed a long wait.

Bruce Taylor and Calum Scott had walked around the outside of the garden and had heard an unfamiliar short, harsh rattling call a few times – on return they checked this with a recording on Ian Ricketts' phone and were confident it was the oriole. At least it was still present. Some pressure off, then, but I was still desperate for others to see the bird, and indeed confirm it was a Baltimore Oriole. Mark finally arrived and we slowly walked towards the ash tree, which is surrounded by pines, while Iain checked out the small orchard. Within a minute the bird appeared briefly at the top of one of the pines, and most managed a view. Bruce even obtained a photo, which was enough to confirm things beyond all doubt. 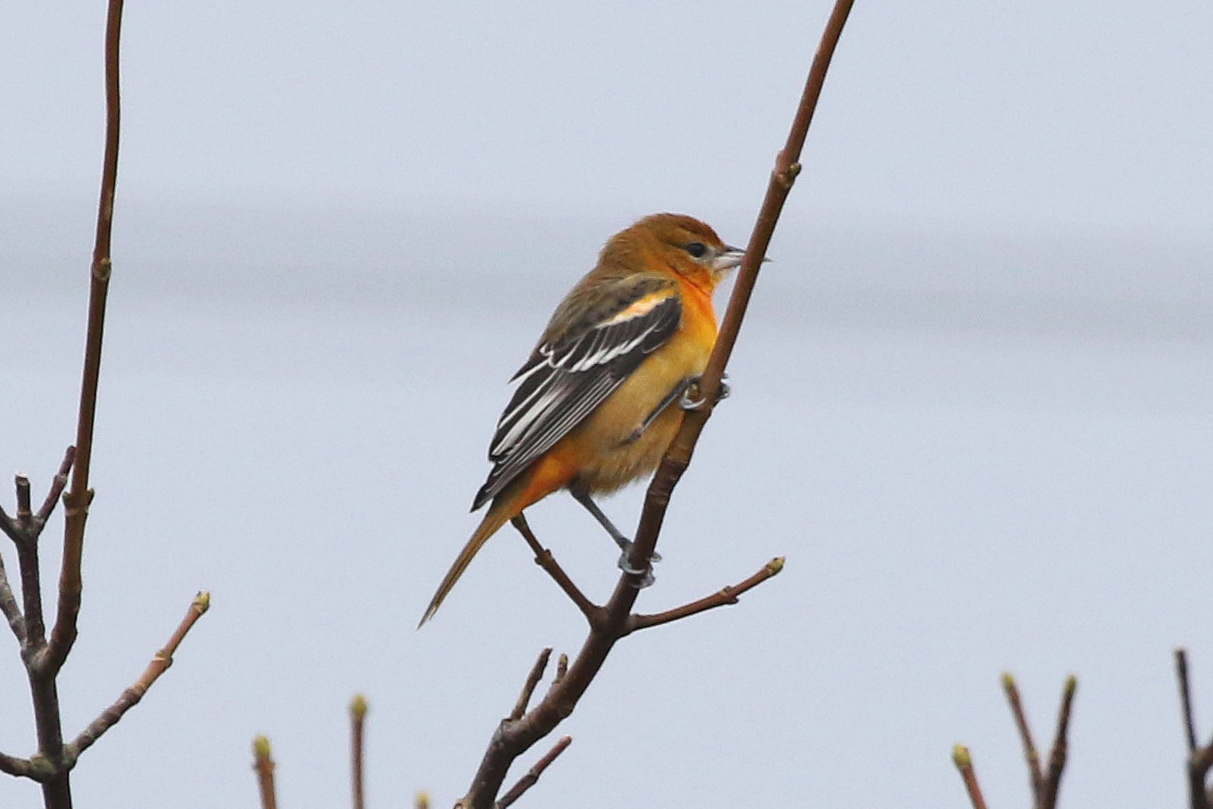 I was so relieved it that it had now been multi observed and really started to enjoy the find – I was buzzing. Over the next hour, Iain, Mark, Kathy, Trish and Angie all caught up with it and we all had several good views, but the bird was fairly elusive. Meanwhile, Bruce had contacted the new owners of Northbay House, for whom he is the gardener, and received permission for us to put the news out. I did get the Yellow-broweds – any day with one of them is a good day. And what a good day it was!

Most of the 'Hebs' birders came for the bird (for some it was a third trip in two-and-a-half weeks), which generally favoured Northbay House and stayed until 21st, though became increasingly elusive. I had always hoped to find a Baltimore Oriole on Barra and now it had happened! If that wasn't enough, we have a 'Guess the next American passerine on Barra' competition in which everyone has two choices and the winner receives a beer from each of the other participants. I received eight bottles of beer, no less!