Tom Wright and I are volunteer Assistant Wardens on Lundy Island, a place that has a history peppered with incredible rarity records including some firsts for Britain. Our autumn season had started strongly with a huge fall of common migrants and several Wrynecks. A long-staying juvenile Rosy Starling and glimpses of Yellow-browed Warblers soon followed. However, almost two weeks of strong south-westerly winds and heavy showers had left sightings relatively unremarkable and we were eager for more favourable weather to return.

A tranquil forecast for Saturday 8 October was very welcome. As the day dawned calm and bright, we were excited and optimistic. What might drop in today? I carried out the morning census, and while it was fantastic to record higher numbers of passage migrants and a diverse list of common species, there was nothing remarkable – yet.

Like many other volunteer programmes, here on Lundy you earn yourself bed and board by contributing to the tasks of the wider island team. After the morning census I joined the team on changeovers, slightly disappointed to be inside for six hours of this superb day. Fortuitously, on this occasion we raced through every job and I was finished by lunchtime, several hours ahead of schedule.

Delighted at the early release, I headed straight back to Millcombe Valley. For those that aren't familiar this amazing island, Millcombe is a hot-spot for bird activity and a must-visit for any birder. For its acreage, Millcombe must be in the running for having the highest count of megas recorded across the UK. A network of paths wriggle through a mosaic of mature trees, mixed scrub, walled gardens and rocky outcrops. Migrants are funnelled into this haven directly off of the sea, providing them with ample opportunity to rest and feed. Notable past visitors include Sulphur-bellied Warbler, Veery, Red-eyed Vireo, Myrtle Warbler, Eastern Towhee, White's Thrush and Green Warbler. 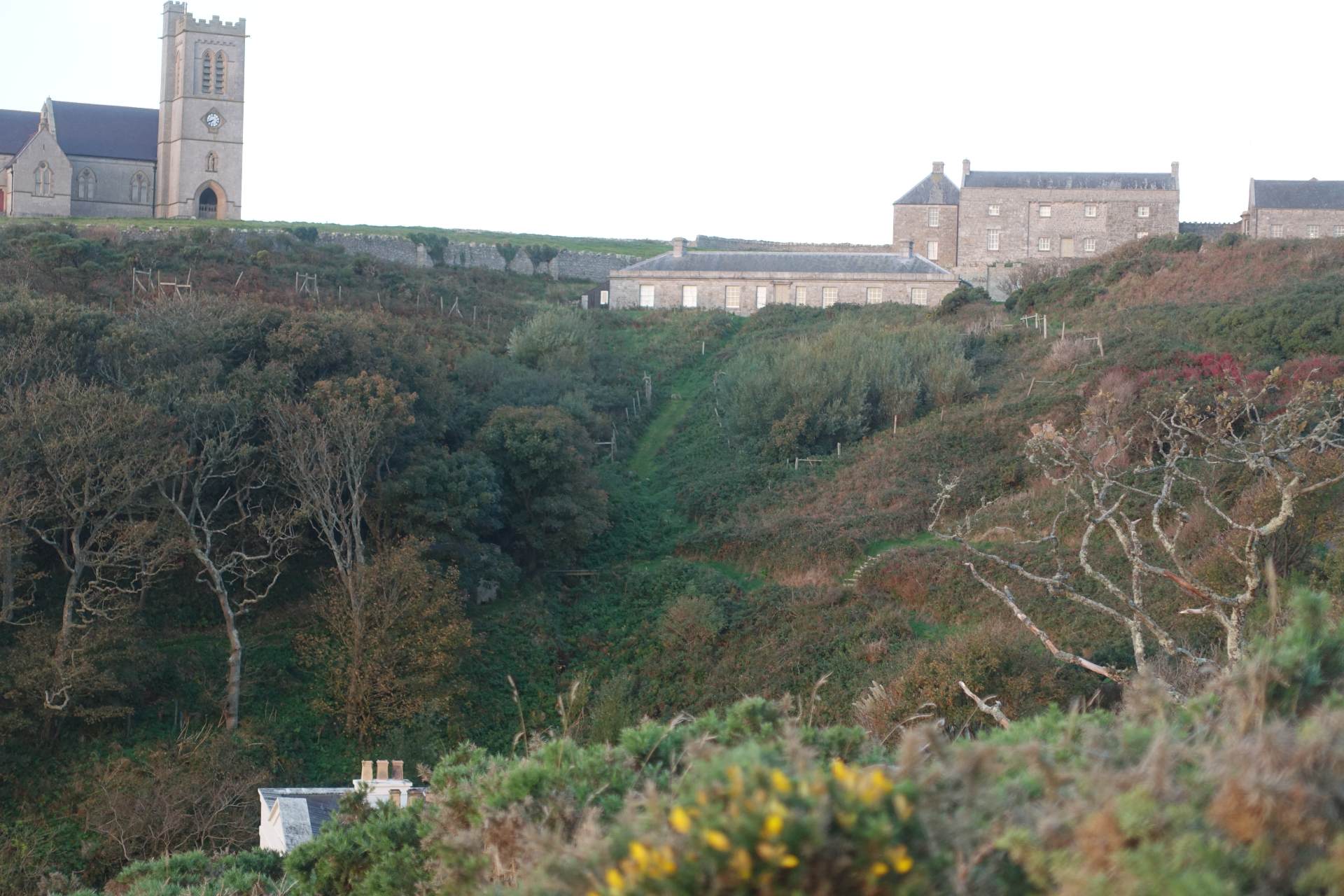 I met Tom at the bottom of Millcombe and we exchanged accounts of our day so far. We then proceeded to plan afternoon sweeps of the island. I wanted to head up to Pondsbury, which is the largest waterbody near to the centre of the island, then working my way back to Millcombe. Tom was going to vis-mig on the coast near Millcombe. I departed for Pondsbury, sauntering up through Millcombe.

On my way up, with a destination in mind I was glancing here and there but not rigorously searching. Perhaps this was to my benefit; during his tenure here as permanent Assistant Warden, Stuart Cossey has found that the most exciting records all appear when he's least expecting it, rather than diligently searching or carrying out a census. In a continuation of this theme, I strolled nonchalantly to the edge of the mature sycamores in Millcombe at 2.30 pm and then my jaw dropped! 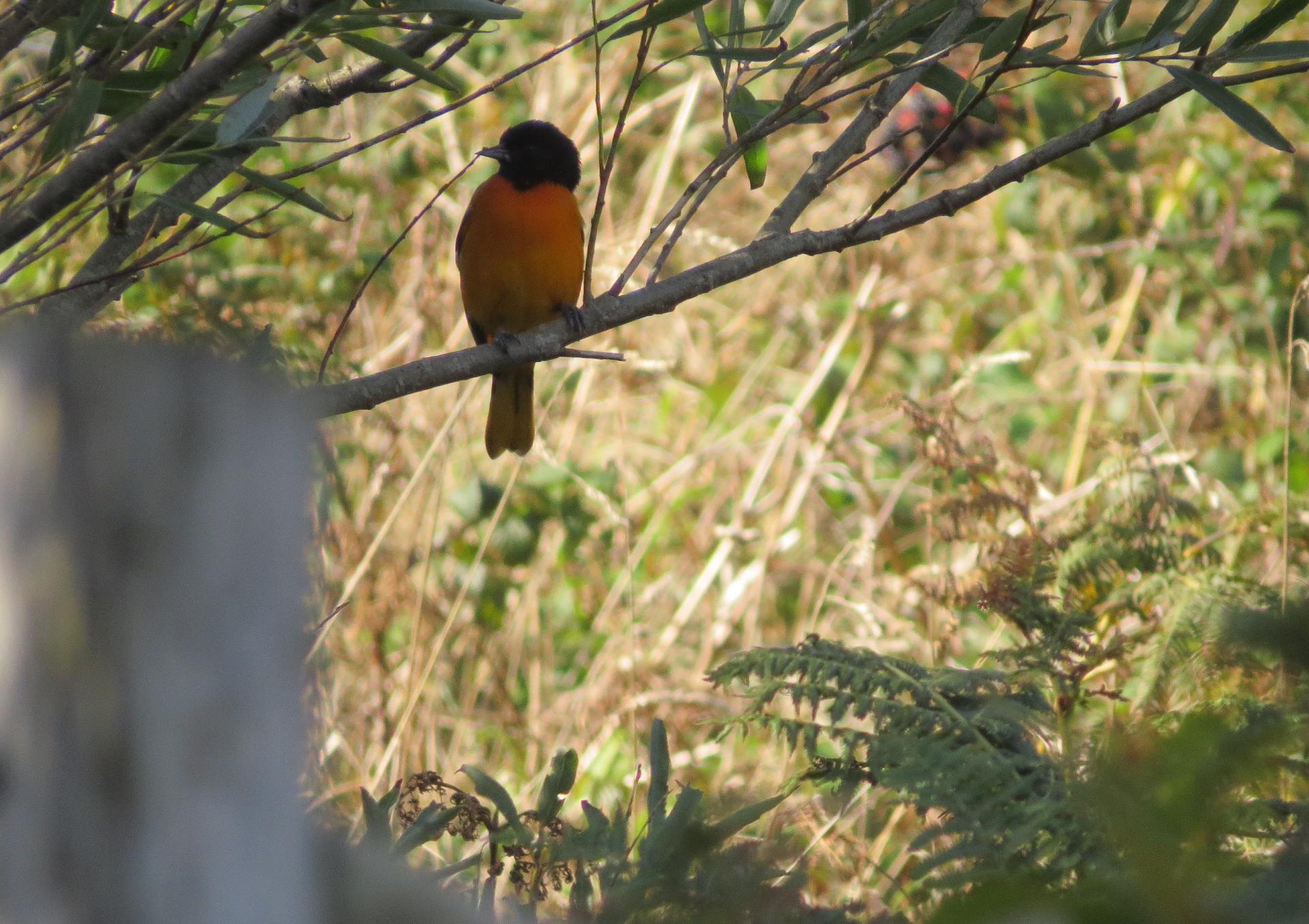 Less than 10 m away, an exotic treat was perched calmly on the lowest branch of a willow. Muscle memory kicked in and, before I knew it, my camera was off my shoulder and at my eye. A record shot was prioritised before bins in this instance, otherwise nobody would ever believe me! I snapped a series of very quick pictures before putting down the camera and watching it move deeper into the scrub and out of sight.

The vivid orange chest was like no bird I have ever seen, topped with a bold black head. 'Oriole, oriole, oriole' was going through my head, but definitely not a Golden, the most likely candidate which I at least knew from field guides …

After a short sprint (on a rather too full stomach – needs must!) I had rounded up Tom and we returned to the willows, breathless and shaking with anticipation. After just one tense minute the bird showed again just a few metres away, displaying a full black head and fairly large pointed beak above the vibrant orange chest, with crisp white wingbars on the black wings.

I would have referred to a book to pin down the species, but Tom's encyclopaedic knowledge of possible vagrants belies his youth, and he saved me the hassle: "Baltimore Oriole," he announced excitedly and confidently. We were looking at an absolute textbook example of an adult male too, making the encounter even more special.

The bird disappeared again, for longer this time. Meanwhile we hastily alerted Stuart. With several angles covered, we waited. A couple of Lundy regulars from MARINElife were slowly making their way back to the boat after a day trip and were equipped with substantial cameras. I politely suggested that it might be worth their while if they paused for a little while by us. Just a couple of minutes later the oriole showed again, flitting from the willow scrub into a small patch of pine via a small oak that was right in front of us. The bird on Lundy is only the third adult male Baltimore Oriole recorded in Britain (Tom Wright).

The beautiful tail with orange sides was strikingly obvious in flight, and with the sun behind us it was a delight to watch from our vantage point. Stuart agreed with our initial ID and, after taking a quick photo of one of Tom's shots for Twitter, hurried off to alert the wider birding community.

It wasn't particularly shy but was quite mobile and full of energy, hopping between a few sycamores before disappearing out of sight by the Upper East Path. Still coming to terms with the display that we had just witnessed, you couldn't have painted a bigger grin on our faces. Dropping all other plans, we spent the rest of the afternoon searching for it, but with no luck. It's amazing how a bird as bright as this manages to elude a thorough search!

We went down for another look in the evening, this time with success. It was now quite contentedly feeding among the sycamores around the tight hairpin bends in the beach road at 5.30 pm. It danced in and out of view above our heads and the whole conservation team, now including Rosie Ellis (Island Warden) admired it quietly for an hour.

By this stage, word was spreading and birders on the mainland were excitedly and anxiously preparing to board charter boats in the morning from Ilfracombe. Both of the two previous Lundy records stuck around for several days, and the first record (which was a first for Britain) actually overlapped dates with our discovery.

The following morning spent searching for the bird was a bit of a rollercoaster as a Eurasian Sparrowhawk was flushed off of a pile of orange feathers. Fortunately, after some debate it was decided that the orange feathers were most likely from a European Robin and definitely not the oriole, which was a brighter shade of orange. Unfortunately, the clear night meant that the bird must have moved on, joining the list on one-day wonders for Lundy. 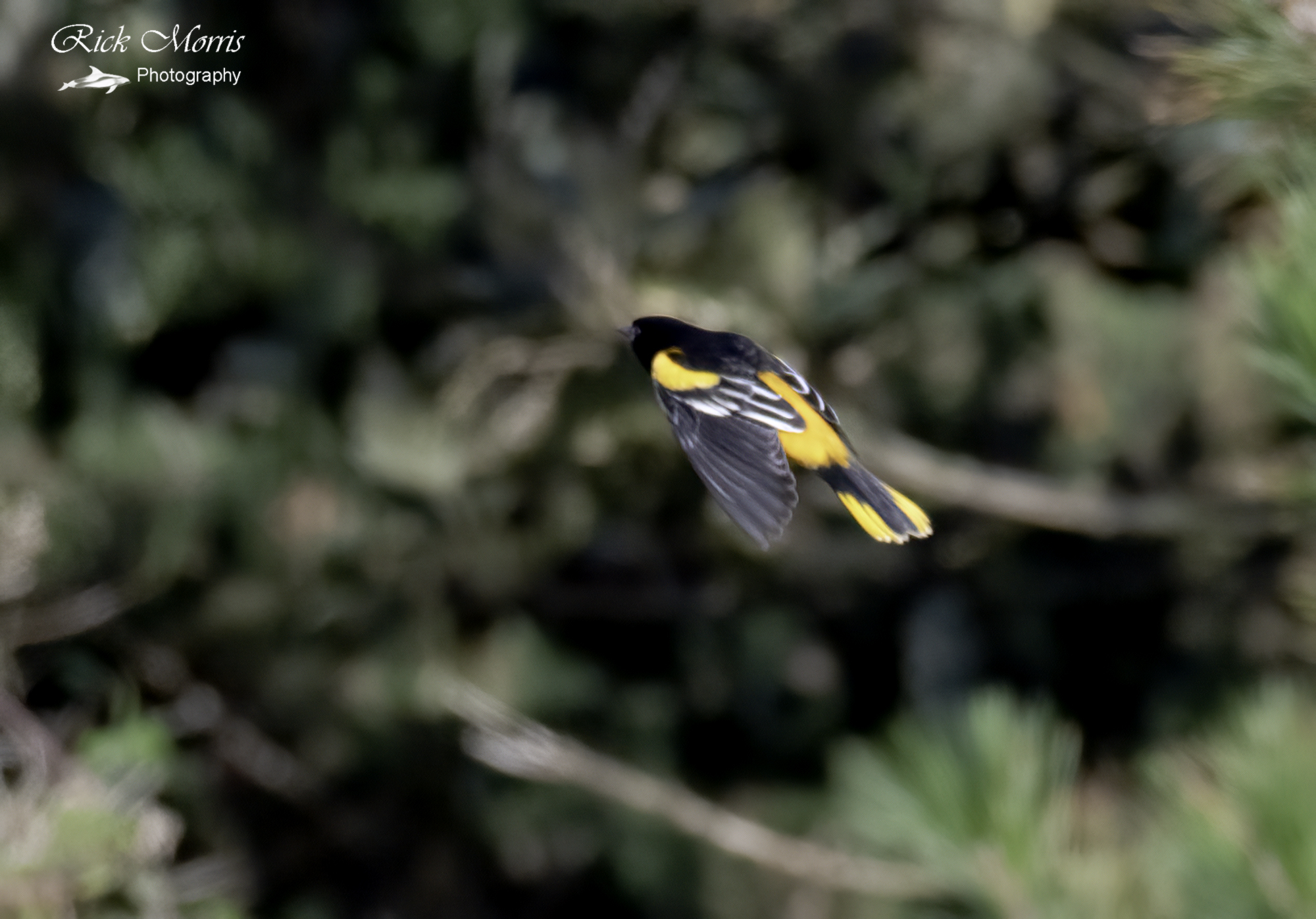 Unfortunately for would-be twitchers, the oriole was only present for one day (Rick Morris).

This beautiful bird is just the third adult male Baltimore Oriole record for Britain. It was a privilege to spot and share it with colleagues, and it will remain an unforgettable day. Additionally, I can't help but wonder what might have happened had I not been lucky enough to get out birding earlier than expected on this day. What else do we miss passing right under our noses due to the fickle whims of fate?

It's worth keeping an eye on our regular blog posts for detailed reports of recent sightings and for information on visiting Lundy; see www.landmarktrust.org.uk/lundyisland.