On Wednesday 18 October, Dougie Preston found a Ring-necked Duck on Sand Water, near Gutcher on Yell, Shetland. A first for the island and Shetland’s second in a week, this was in itself a worthy discovery. It was while photographing it, however, that his day was about to get even better. With the Ring-necked framed up in his viewfinder, an immature/female type Velvet Scoter shot through his field of view as it landed on the loch alongside the small flock of Aythya ducks.

Instinctively he fired off a few frames, then the bird started to dive almost immediately. Barely two minutes later, at approximately 1.20 pm, the duck took flight, heading north in the direction of Gutcher and Bluemull Sound. He was immediately struck by its atypical head shape and bill profile, especially the latter which set off alarm bells, as his as his mind's eye recalled Birding Frontiers articles on White-winged Scoter – a very commendable shout indeed. After consulting the available literature on the species, Dougie posted a photo on the local WhatsApp group at 2.24 pm which read: "Comments welcome ... only touched down very briefly on Sand Water Yell early afternoon". 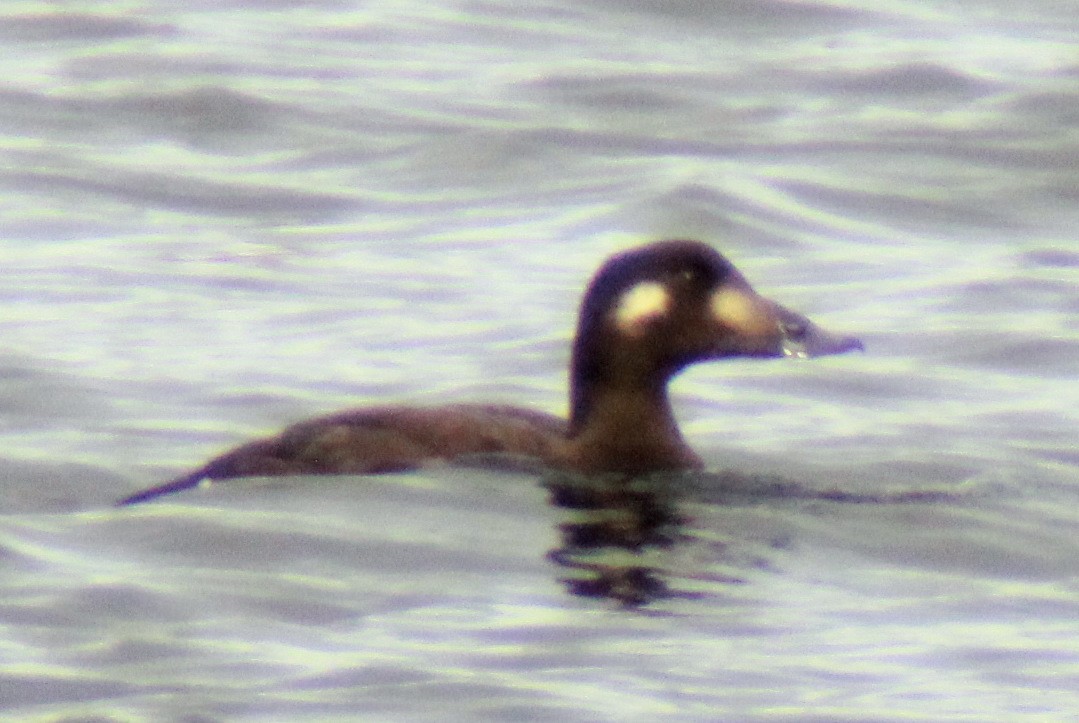 Prior to this I was birding the Belmont Farm area on Unst, having dropped off tour guests at the ferry, when I found a female/immature type Velvet Scoter at approximately 2.15 pm on Loch of Belmont. With 'bins only' views, and at quite a distance from the farmyard, I hadn't much to go on, however was intrigued enough to want to see it in the scope. Velvet Scoter is a scarce enough bird in Shetland that any rarity-savvy birder should always want closer views.

Returning to the car, I drove back through the yard in the hope of getting it in the scope. However, it and the Long-tailed Ducks it had been loosely associating with had gone. A scan of the ferry terminal and closest loch, Snaravoe, drew a blank. It wasn't until back in signal range an hour later in Uyeasound that I picked up Dougie's WhatsApp messages, which had certainly sparked interest to say the least. Paul Harvey had been quick off the mark with positive feedback to Dougie's post and had also contacted him directly to discuss the bird. I was only five minutes away birding at Uyeasound, so hurried back, my heart racing as I thought it must surely be the same bird. It had returned to Loch of Belmont and now with scope views and a few hand held shaky 'phone-scoped' images, I could see enough to see the same 'Surf Scoter-like' appearance, with a square head shape and flat crown, a raised bill profile and a 'broken-nosed' look.

With no signal I had to race down to get on the ferry terminal's wifi to call for back-up from fellow Unst birders. I couldn't get through to Micky Maher, but Mike Pennington had already acted on intuition in the hope of relocating the duck and, knowing that Sand Water was just a few miles away, was just up the road scanning Loch of Snaravoe.

Although the light conditions and distance from the bird were far from ideal, Mike was keen on its 'putative' identity, as was Micky Maher, who arrived armed with various features on White-winged Scoter identification. Dave Cooper and Alan Conlin were not too far behind, each also arriving with the same articles in hand, the most favoured being Guillermo Rodriguez Lazaro's on the Birding Frontiers website, which we found invaluable. This was a peculiar situation for us in that, although Dougie had already found and flagged it up, with only two previous British records and in a plumage not yet recorded in Europe, this still felt a difficult call to make.

It was now well after 4 pm. The light was already poor and, with dusk also approaching, conditions were challenging to say the least. It was becoming increasingly hard to assess and be sure of features we thought we could see. We were nonetheless confident that based, on its distinctive overall Surf Scoter-like head shape and appearance, and especially its bill structure, profile and length, that this bird could surely not be a fusca but was a very good fit for deglandi, having also considered stejnegeri.

In addition to the above we were also struck by the size and position of the large oval-shaped nostril (we all commented that you could see straight through it) and, now 'genned-up' on finer ID points on the bill feathering-pattern and angle, we knew what to look for. The latter looked to be a good fit, certainly appearing to extend beyond the nostril, and, more importantly formed a 90-degree angle. However, in the difficult light conditions and distance this was not easy to assess with certainty, and the unfortunate reality was that we just ran out of time that day. 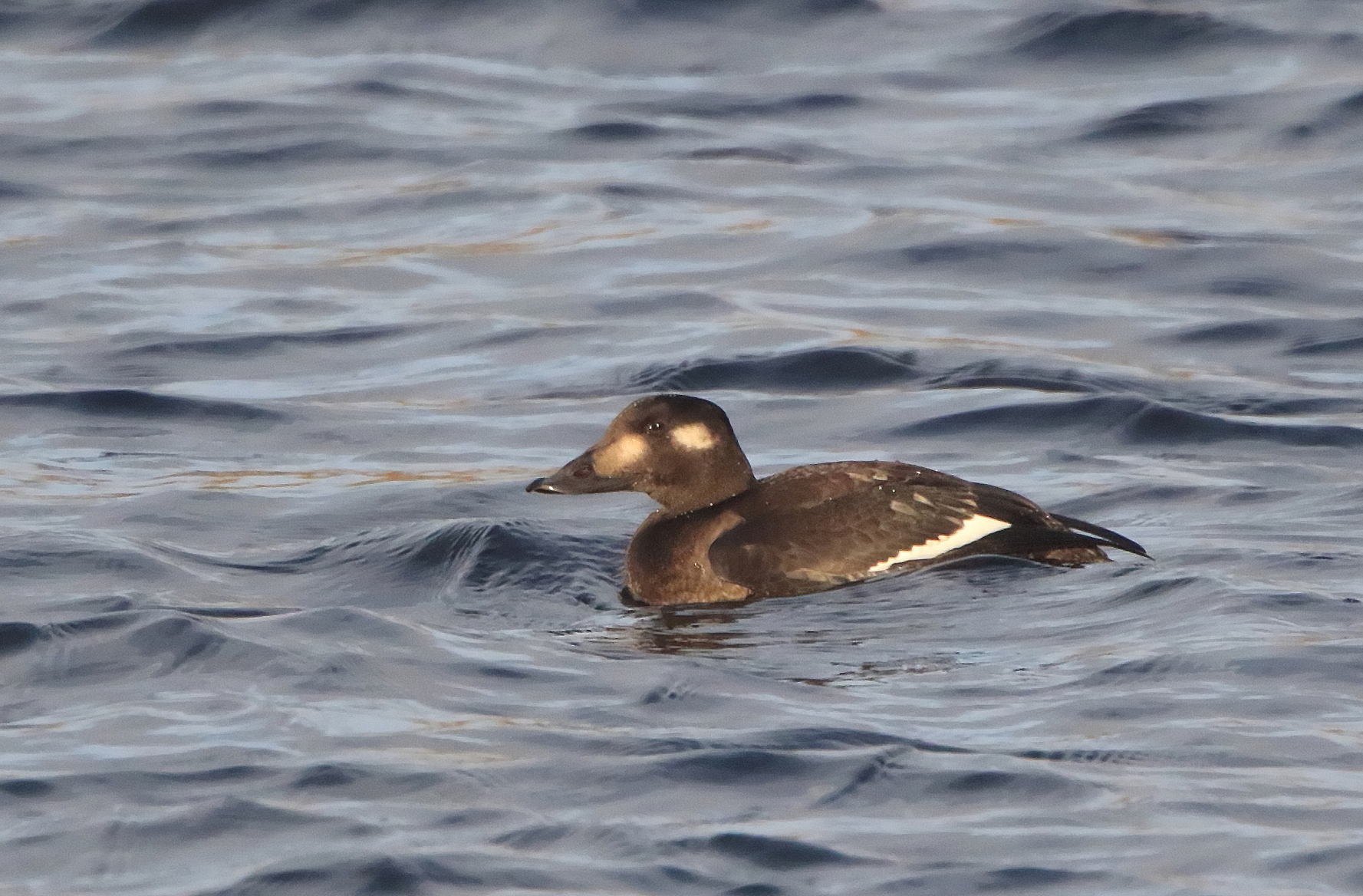 We decided on a cautious approach. It was agreed that further research of both Velvet and White-winged Scoter was needed and, better still, closer views in the morning! We had also considered that, due to ferry times, no one would have been able to make it before dusk and, after all, news was already out.

We discussed the bird at length that evening and put the news out that it had been relocated on Loch of Belmont. I also spoke to Dougie, who was naturally delighted both that it had been relocated and to hear that our opinion was very much in agreement with his. Of course, this is said after just about every 'big' bird, but in hindsight we had enough at that stage for a conclusive identification that afternoon, especially with Dougie's photo and our field observations, as well as other supporting images. With the chance to reflect, confidence continued to grow. Mike's wife Margaret pointed out a distinguishing feature that confirmed for certain they were the same bird. It was a small white smudge on the bill bellow its right-hand nostril, which was consistent on all images.

Dougie had commitments the following morning, so couldn't be there with me at first light, but thankfully the scoter was still present. Mike and Dave arrived soon after, and with better views there was a much more relaxed vibe as we watched the bird, helped eventually by shared opinion from Paul Harvey and Roger Riddington, who were among the first to arrive. They agreed how subtle it was and how that in different circumstances it might have been overlooked. Needless to say, it was quite the performer that morning! This was quite the opposite to our first encounter, allowing for really good images to be taken, in turn confirming the key features we'd tentatively noted, leaving many to no doubt think: “oh yes, surely that was never a Velvet; it's obviously a White-winged Scoter!” 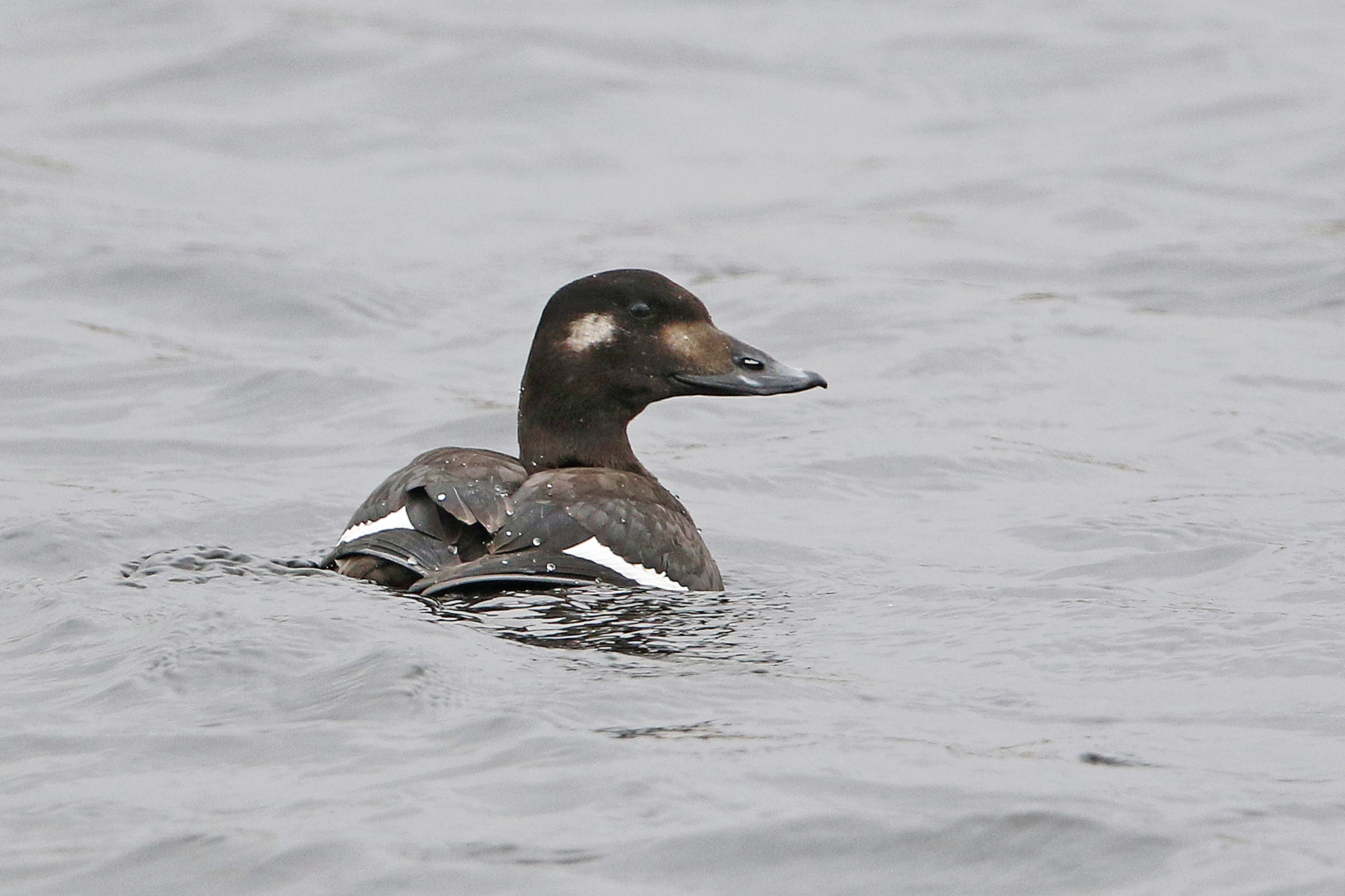 The American White-winged Scoter performed much closer on the morning of 19 October and allowed for excellent images to be taken, documenting the identification beyond all doubt. The distinctive head and bill structure are particularly apparent in this photo (Jim Nicolson).

I recently contacted Guillermo Rodriguez, asking him for comment and if we were right in thinking it was a first-winter male. He responded:

"Hi Brydon, I fully agree with your diagnosis - the bird is a first-year male White-winged Scoter. Key features for ageing are the neat, homogeneous plumage and velvet-like feathering around the bill, all certainly pointing towards a juvenile; sexing is slightly more complicated as this bird isn't particularly short or long billed, but the relatively square head and bumpy bill, and presence of significantly large white spots on the greater covert tips, all support sexing as male.

" And I agree Martin Garner would have been super excited about this bird!"

Guillermo kindly allowed us to reproduce his composite of first-winter drake American White-winged Scoter images below, alongside an excellent image of a first-winter drake Velvet Scoter, taken in Shropshire in November 2016. We believe these help to illustrate and compare the key features of fusca and deglandi, which were key to the identification of the Unst bird. 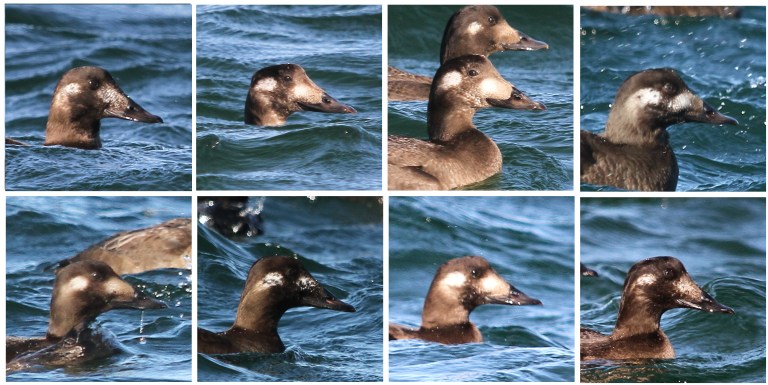 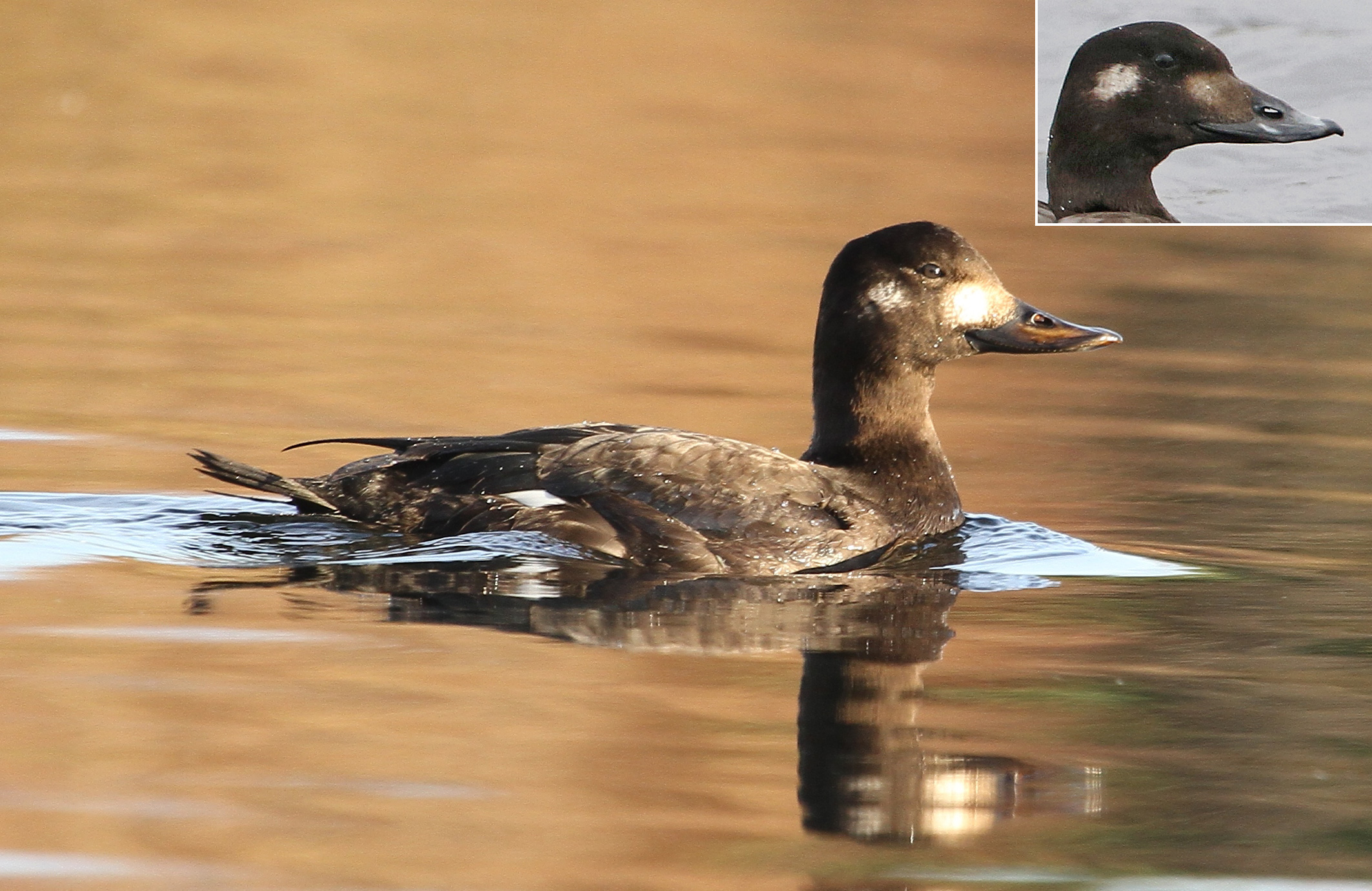 Having fantasised about finding White-winged Scoter in Shetland, it was a real privilege to have played a part in what turned out to be a real team effort, heralded by an impressive bit of impulse identification by Dougie.

It is perhaps relevant to add that it later transpired that this bird had been identified and actually photographed as a Velvet Scoter off Belmont just a few days before. Hopefully this bird may serve to encourage/remind birders to scrutinise the age and sex of all 'Velvet Scoters', when possible. Having not been seen here since 22 October, might this bird turn up again in a scoter flock somewhere else in the country?