Thursday 21st November 2013 dawned and, for once, the weather forecast looked to be correct — it was calm. "Calm" is a relative expression here, as the previous three days had been particularly blustery, with winds gusting to 54mph from the north-west. Indeed, the whole of November had been inclement with winds predominantly from a northerly quarter.

With the lull in the weather, it was an opportunity to carry out the BTO Winter Thrush Survey. Yvonne, my wife, and I share six self-selected squares on South Uist: two at Druidibeg, two at North Locheynort and another two at South Locheynort. The first two locations, Druidibeg and North Locheynort, were chosen because they actually have some trees — especially the latter — and both are considered to be local hotspots. We covered the South Locheynort tetrad for the Bird Atlas, finding it to contain a variety of habitats which made it particularly interesting. Add to that, it's a place that is not frequently visited. Another advantage of all three locations is that a single-track road passes through the middle of each square, affording good coverage on foot. Access does not come easy for squares on the east side of the island!

That particular morning, as Yvonne was attending an arts course, I was to carry out the survey alone. Because of the weather, I decided that I would survey North and South Locheynort and make a morning of it. I normally carry a bridge camera but, again because of the weather, I decided to take the SLR as there are often some good photographic opportunities with seals or otters at these two locations.

North Locheynort was quieter than I had expected, with just a few more Blackbirds and Song Thrushes than usual, but no Redwings. Although being very much in evidence around the island over the past few days, they had probably taken advantage of the overnight conditions to move on.

The situation was similar at South Locheynort, but there were a few Redwings to be seen. By the time I had finished the survey, I had a few shots of the seals loafing on the rocks, good views of a sub-adult White-tailed Eagle and an adult Golden Eagle being mobbed by a male Hen Harrier. Not unusual sights around Locheynort, but a good day's birding just the same.

I was returning to the car when I heard a 'tut tut tut'. I looked in the direction of the sound to see what I instinctively thought to be a Blackbird, which then flew across the road in front of me to settle on a rock in some rough pasture about 60 yards away. I might not have taken any notice of the bird, but it was in an area where I had not seen any thrushes on the survey and thought I might just sneak it in (I hope that's not against the rules!). It then continued to call, and it did indeed look more robust and erect than a Blackbird. Even so, when raising my binoculars to view the bird, my thoughts were more about which square to record it against, rather than "this is different". 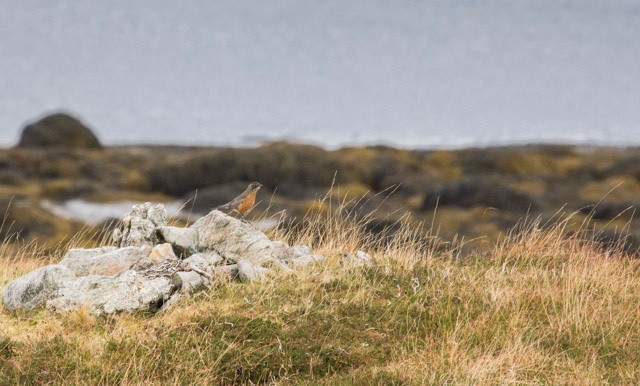 What I saw made me look again. Not that identification was the issue: Turdus, black head, orange breast and belly, grey back — I just wanted to make sure that it was real! Yes, I wasn't seeing things — it was an American Robin!

The robin then flew to the road some 200 yards ahead of me, and began foraging in the rough pasture and along the grass verge beside the road. I watched and photographed it for some 15 minutes, and it allowed me to approach within 50 yards before rising to sit on the fence and subsequently moving some 10 to 20 yards further away. Eventually, however, it flew east and out of sight. 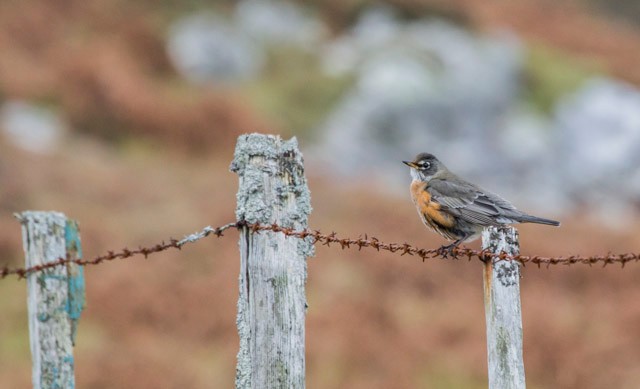 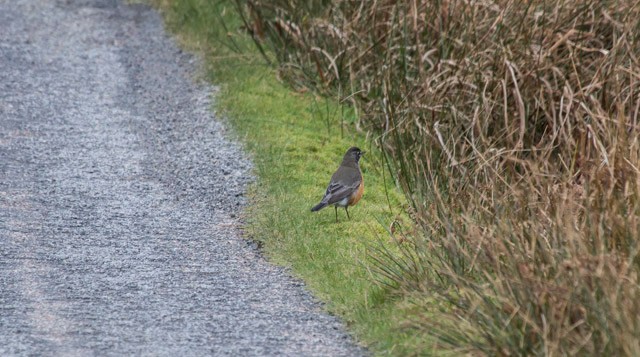 Having no mobile telephone with me, I returned home and informed some of the local birders. I returned later that afternoon with three fellow birders, when the bird was relocated on a large vegetable patch covered in seaweed, some 100 yards from the road and close to one of the few houses in South Locheynort. It stayed in this area until dusk. 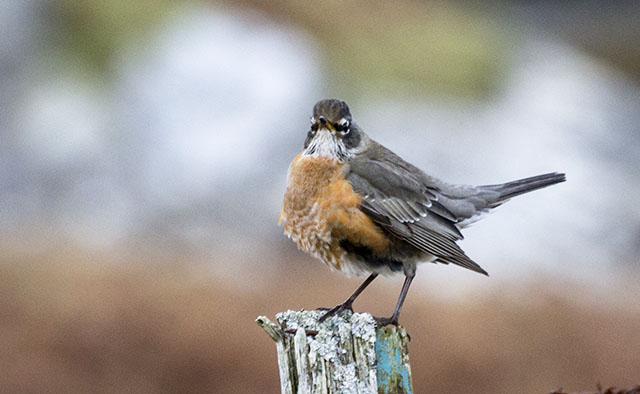 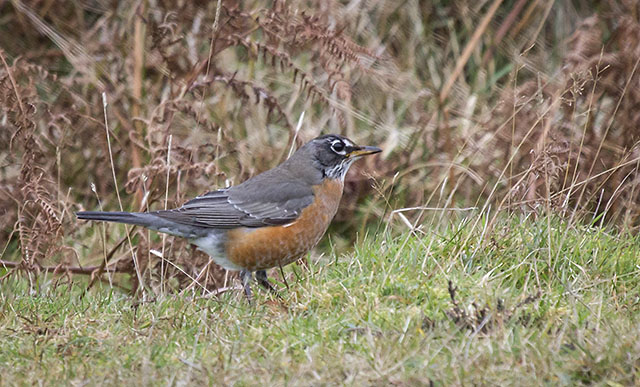 The South Locheynort American Robin can easily be aged as a first-winter by the white spots to the tips of the greater coverts (Photos: Ian Thompson)

It was subsequently revealed that the bird had been seen some four days previously, but the landowners did not want the news to be made public. The bird is probably still to be found in South Locheynort, and was last reported on 3rd December. It is often seen along the road but shows a preference for the seaweed-covered vegetable plot, which can easily be seen from the road. Should it prove to be a long stayer and anyone decides to twitch the bird, please be aware that there are some sensitivities around this bird and please respect the local residents' privacy. Thank you in advance for your co-operation with regards to this and any future rarities on the islands — it's very much appreciated!