More at home in the Mediterranean region, Little Bittern and Squacco, Black-crowned Night and Purple Herons have previously been rare visitors to Britain and unfamiliar to many birders. However, as our climate warms, occurrences are becoming more numerous, and some of these species have even successfully bred here. While they might not be overly similar to Britain's native herons, their very unfamiliarity may cause confusion. Learn how to identify these sought-after species in all plumages with confidence using Andy Stoddart's definitive guide. 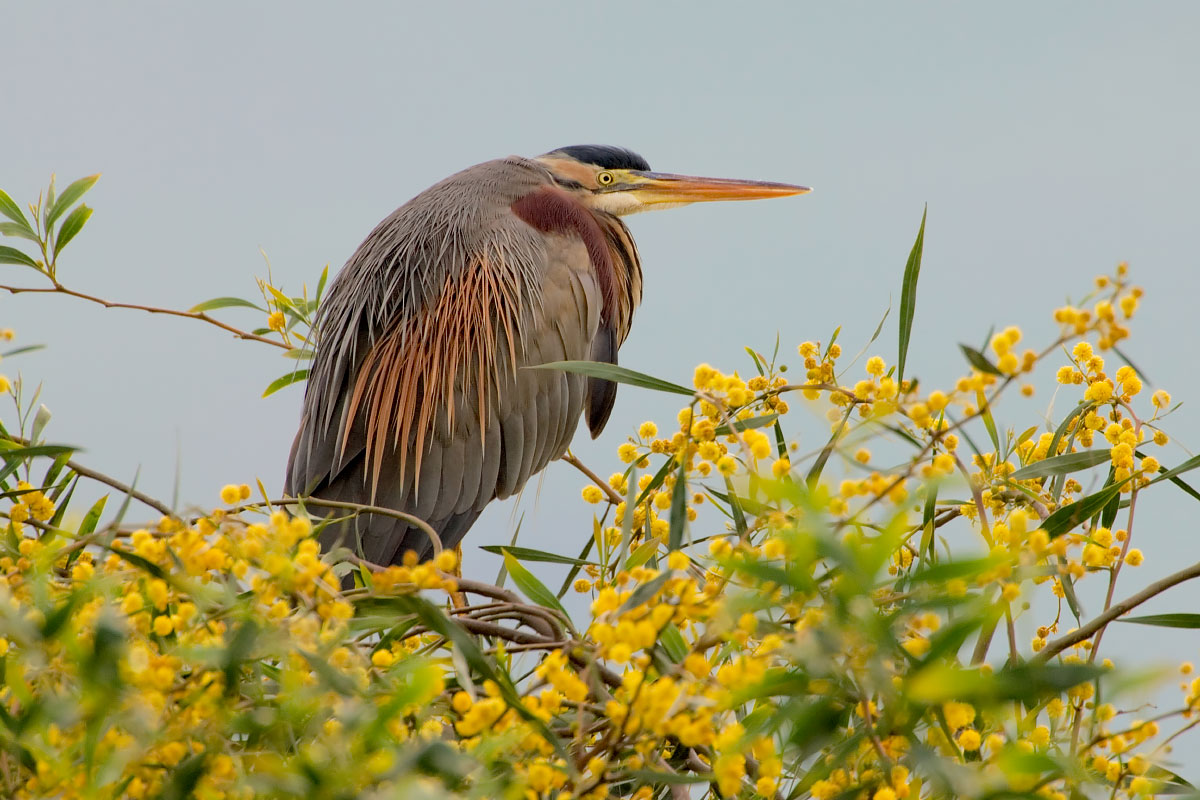 Adult Purple Heron (Hula Valley, Israel, 3 April 2007). Rare herons are not hard to identify if seen well, and this beautiful Purple Heron is posing better than most. Normally a shy bird of dense reedbeds, this is an excellent view, allowing a full appreciation of its purple 'shoulder' patch, rusty elongated scapulars, stripey face and neck, and long, dagger-like bill (Daniele Occhiato / www.agami.nl).

The effects of climate change on our birds are becoming ever more obvious, with a number of Mediterranean species advancing northwards and becoming more regular in Britain. The clearest evidence for this is provided by the herons, with first Little Egret and now Western Cattle and Great Egrets establishing themselves as part of the British avifauna. Following in their footsteps, albeit a little more tentatively, are a number of other, rarer, southern herons.

This species breeds across central and southern Europe and also in south-west and Central Asia, wintering in sub-Saharan Africa. It has traditionally been a rare spring vagrant to Britain  – mostly in May and June but with a few in summer and early autumn – with just over 250 records between 1950 and 2016.

It remains quite rare, but famously bred at Potteric Carr, South Yorkshire, in 1984, and since 2010 has bred in Somerset's Avalon Marshes. Might this new toehold in Britain represent the beginning of a colonisation?

Little Bittern a very small heron indeed, smaller even than a Common Moorhen. It is most at home clambering around in dense reedbeds and reedy ditches and can be frustratingly hard to see, giving away its presence only by its spring territorial call – a low-pitched, croaking, frog-like hogh repeated every two seconds – and by occasional short flights with rapid wingbeats and glides low over the reed tops. On such occasions it is the small size and striking pale creamy-buff forewing patches which catch the eye.

When seen perched this is a beautiful heron, with the males showing blackish crown, nape, upperparts and flight feathers and creamy-buff face and underparts. Females are similarly patterned but duller and browner with reduced plumage contrasts. Juveniles are duller still and heavily streaked, recalling a miniature Eurasian Bittern.

This heron has a more south-easterly distribution than Little Bittern. It can be found patchily throughout the Mediterranean, but most breed in south-east Europe and south-west Asia. It is also a migrant to sub-Saharan Africa.

In the relatively recent past it has been a very rare species in Britain, with only just over 100 recorded between 1950 and 2016. However, prior to 1914 it occurred more regularly. It has become commoner again since the 1990s, with a record 10 in 2015, but there has been no indication of breeding. Most Squacco Herons occur in May and June, but there are also autumn records.

At rest, this is a beautiful golden-buff small heron with elongated black-and-white nape feathers. In flight, however, it is utterly transformed into a white-looking bird with white wings, rump and tail and it could then be mistaken for a Western Cattle Egret, although it is smaller, slimmer and more elegant than that species. The sexes are alike, but juveniles are a little duller and more streaked.

Black-crowned Night Heron has a worldwide distribution, breeding across southern and central Europe and south-west Asia, much of Africa, the Indian subcontinent, East and South-East Asia and most of the Americas.

It is classed as a scarce migrant in Britain – mainly from April to June, but there are also summer, autumn and winter records – and there is evidence of a recent decline. Its true British status is, however, clouded a little by its crepuscular habits and by a long history of escapes, particularly around Edinburgh and in central Norfolk.

It generally roosts by day in waterside trees, emerging at dusk to fly to a feeding area. The most recent addition to the list of British breeding waterbirds, it first successfully fledged chicks at Westhay Moor SWT, Somerset, in July 2017.

This is a small, stocky heron, stout billed with a short neck and legs. The sexes are alike, adults having a black crown and back and grey wings, rump and tail. The forehead, cheeks and underparts are white. Juveniles are brown, spotted white above and streaked below, and might be taken for a Eurasian Bittern. In flight this is a compact and stocky heron with a slightly drooping bill and a short foot projection. The call is a low Raven-like croak.

This species breeds throughout southern Europe, southern and south-west Asia and also occurs in the Far East. It winters south into Africa, the Indian subcontinent and South-East Asia.

Historically rare in Britain, Purple Heron has become commoner in recent years and is now classed as a scarce migrant, mainly in spring but also in autumn. After 'teasing' for many years with extended stays in spring, it bred in Britain for the first time at Dungeness, Kent, in 2010. It is a shy and furtive species which favours large reedbeds.

Purple Heron is a supremely slender, snake-like version of the more familiar Grey Heron. It is smaller than its commoner relative, with a long and fine bill, extremely long, thin neck, slender body and long toes. In flight it shows a prominent drooping coiled neck, narrow body and wings, and a long and prominent foot projection. Its flight action is more jerky and hesitant than that of Grey Heron.

Adults (the sexes are alike) are grey but have reddish-buff sides to the neck, dark stripes in the face and neck, and a rich vinous colour on the 'shoulders', breast and belly. In flight the underwings look strikingly dark. Juveniles are a bright rich orangey-buff with a striped neck.

Adult male Little Bittern (Hyères, France, 30 April 2015). This male Little Bittern is caught in a typical pose, creeping furtively along the edge of dense waterside vegetation. Note the solid dark cap and upperparts, contrasting sharply with the pale ochre wash across the underparts and wing coverts. Though not shown in this individual, a vivid red flush to the base of the bill is acquired by males during the breeding season (Aurélien Audevard). 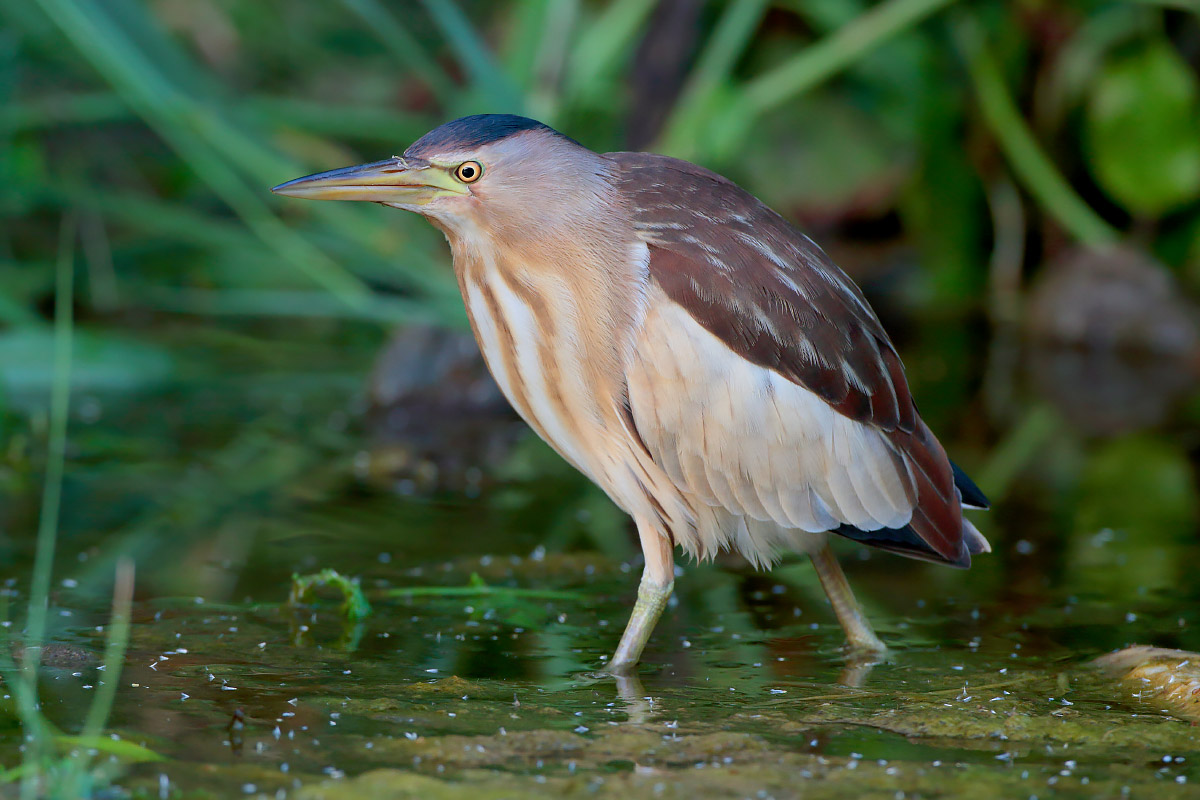 Adult female Little Bittern (Lesvos, Greece, 8 May 2010). This female Little Bittern shows the same plumage contrasts as the male, but they are more subdued. The crown and upperparts are brown rather than black and there is fine whitish streaking in the latter. The ochre wash across the underparts and the closed wing is paler too (Kit Day). 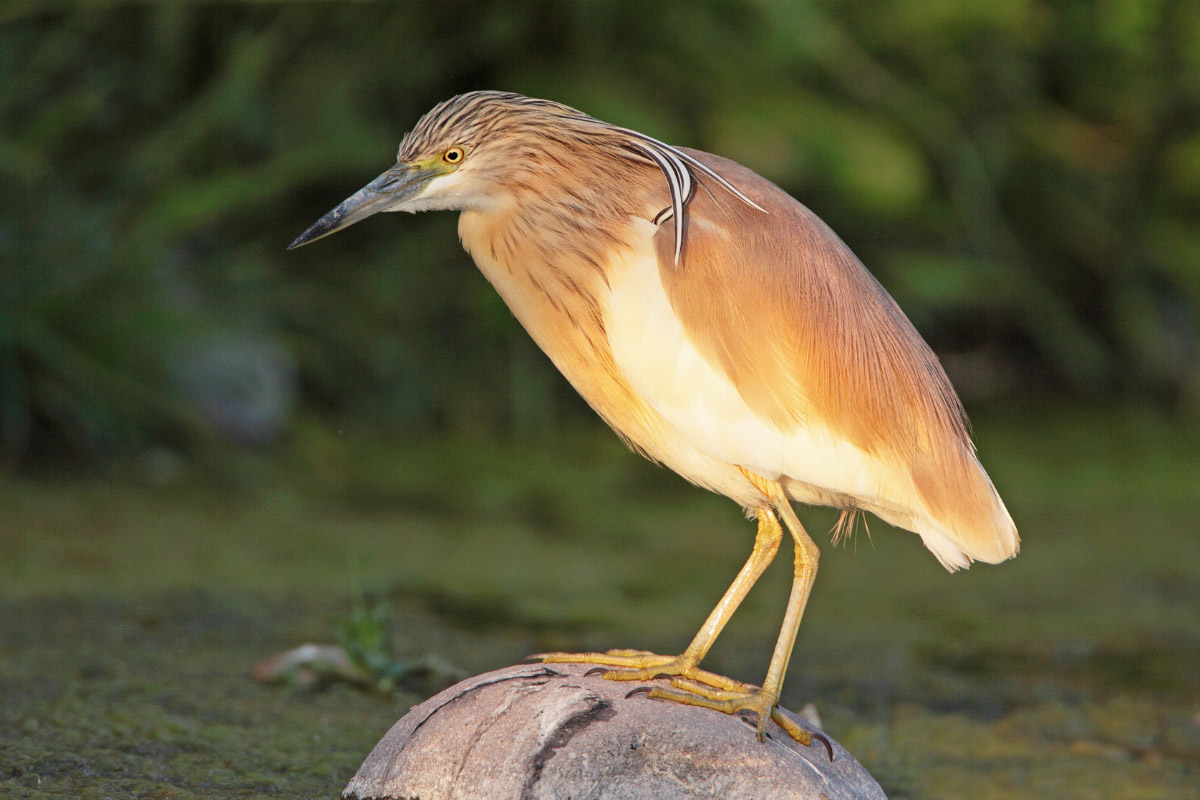 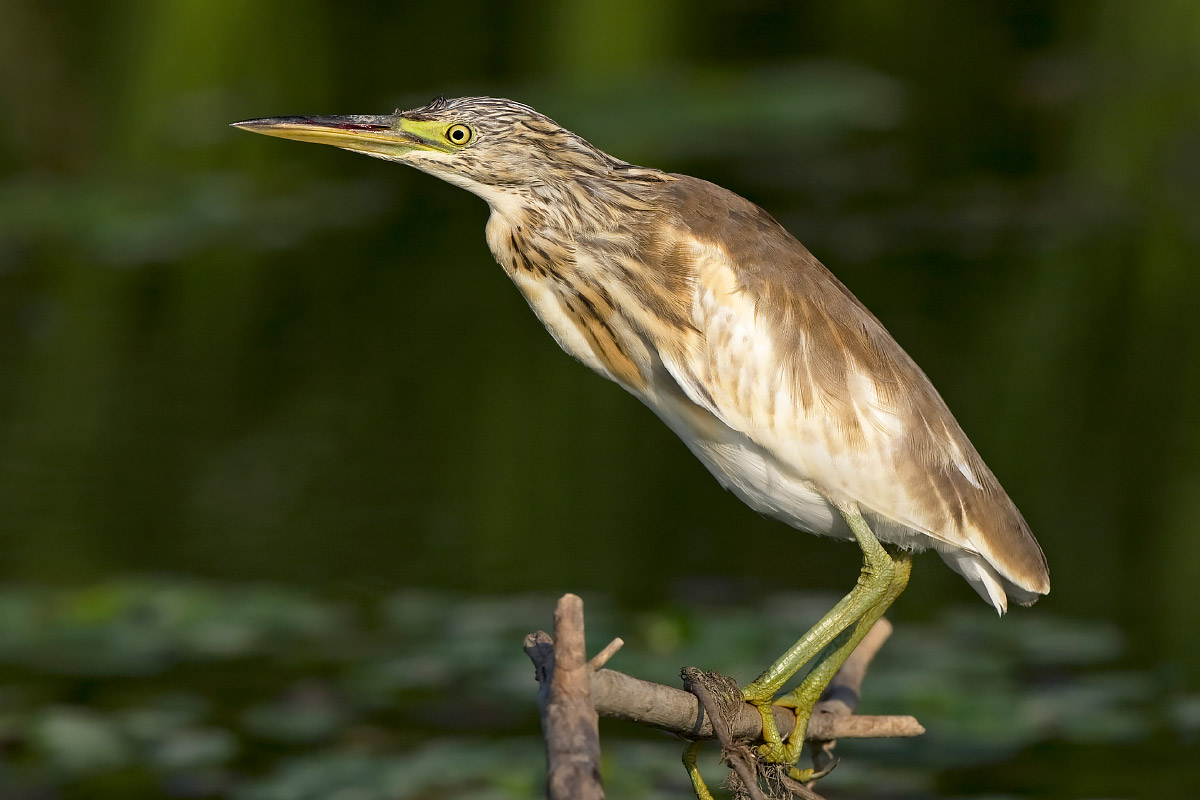 Juvenile Squacco Heron (Danube Delta, Romania, 22 August 2007). Young Squacco Herons are much drabber, being dull brown above with a prominently streaked head and neck. The wings and tail are already pure white, however. Although beyond the scope of this article, any young Squacco Heron should be checked for the much less likely possibility of Chinese or Indian Pond Herons (Robin Chittenden). 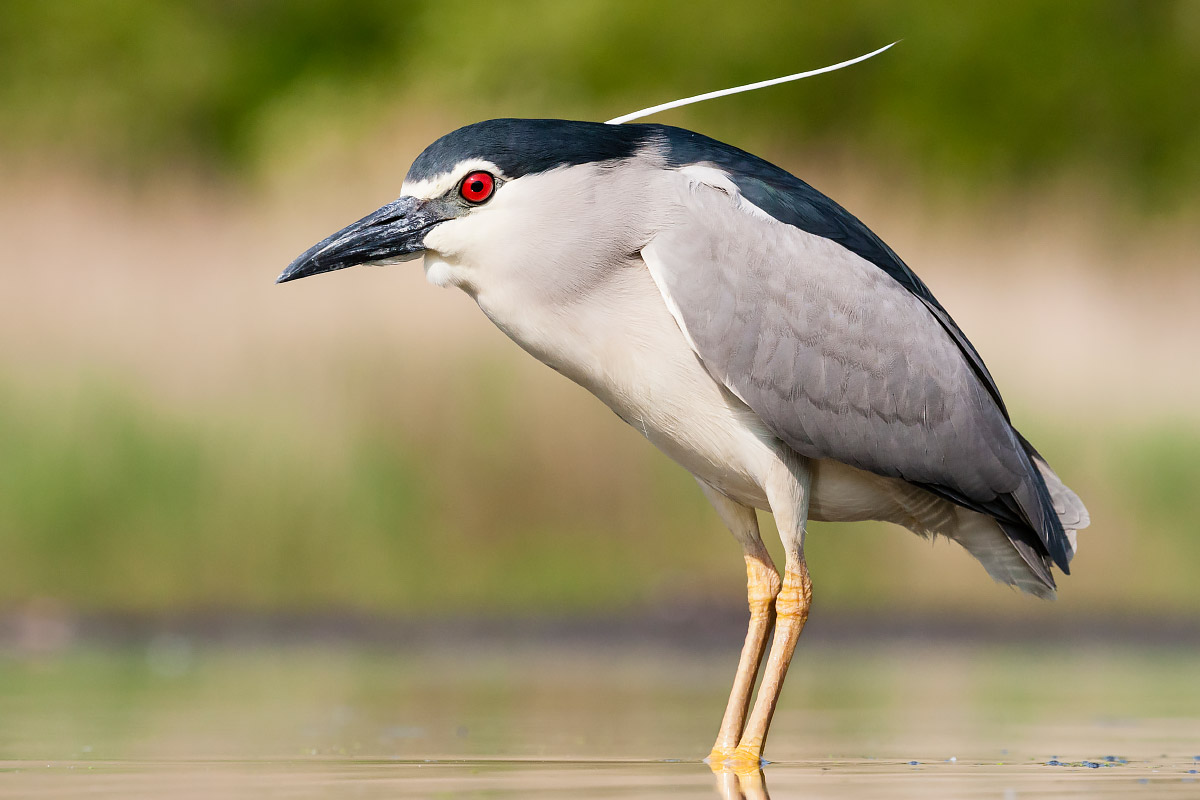 Adult Black-crowned Night Heron (Pusztaszer, Hungary, 3 May 2014). With its black crown and upperparts and paler wings, adult Black-crowned Night Heron has the same basic plumage contrasts as Little Bittern. However, the two species are very different, the closed wing of the night heron being pale grey and the underparts greyish-white. Note also the large and piercing red eye and the much stockier structure, in particular the rather short but very stout bill (Marc Guyt / www.agami.nl). 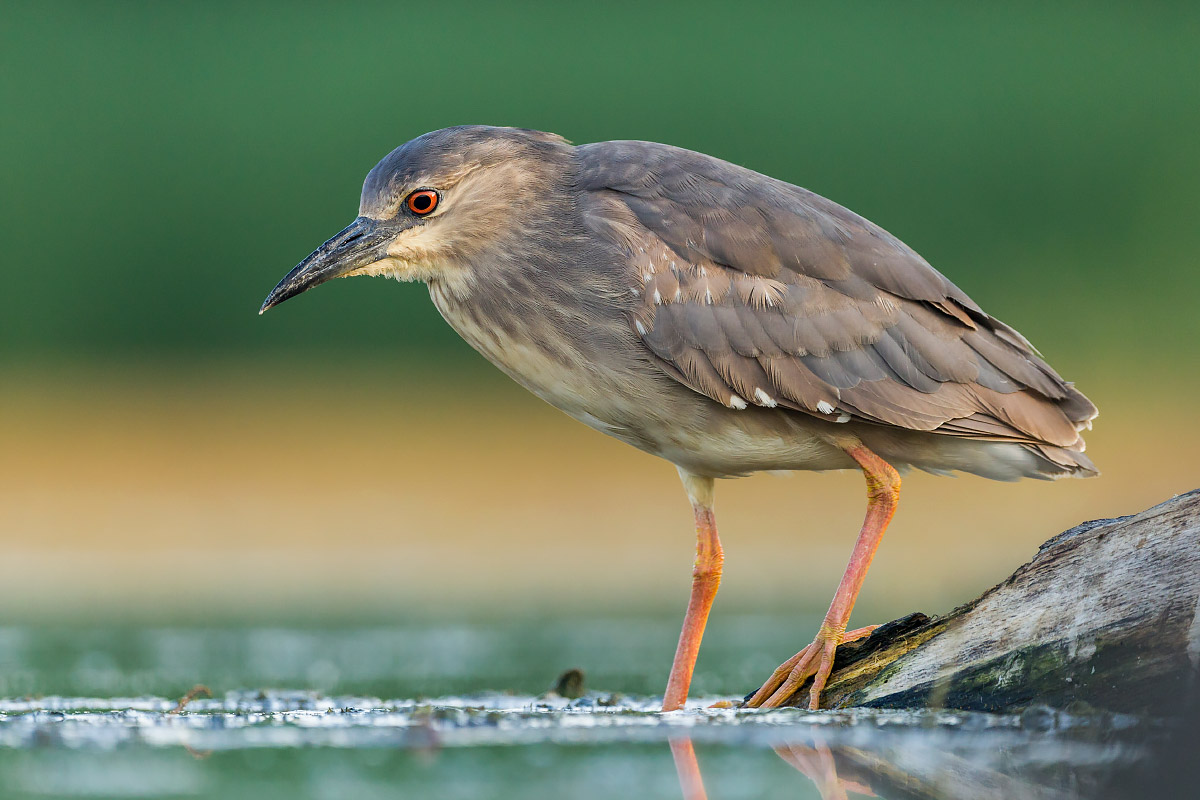 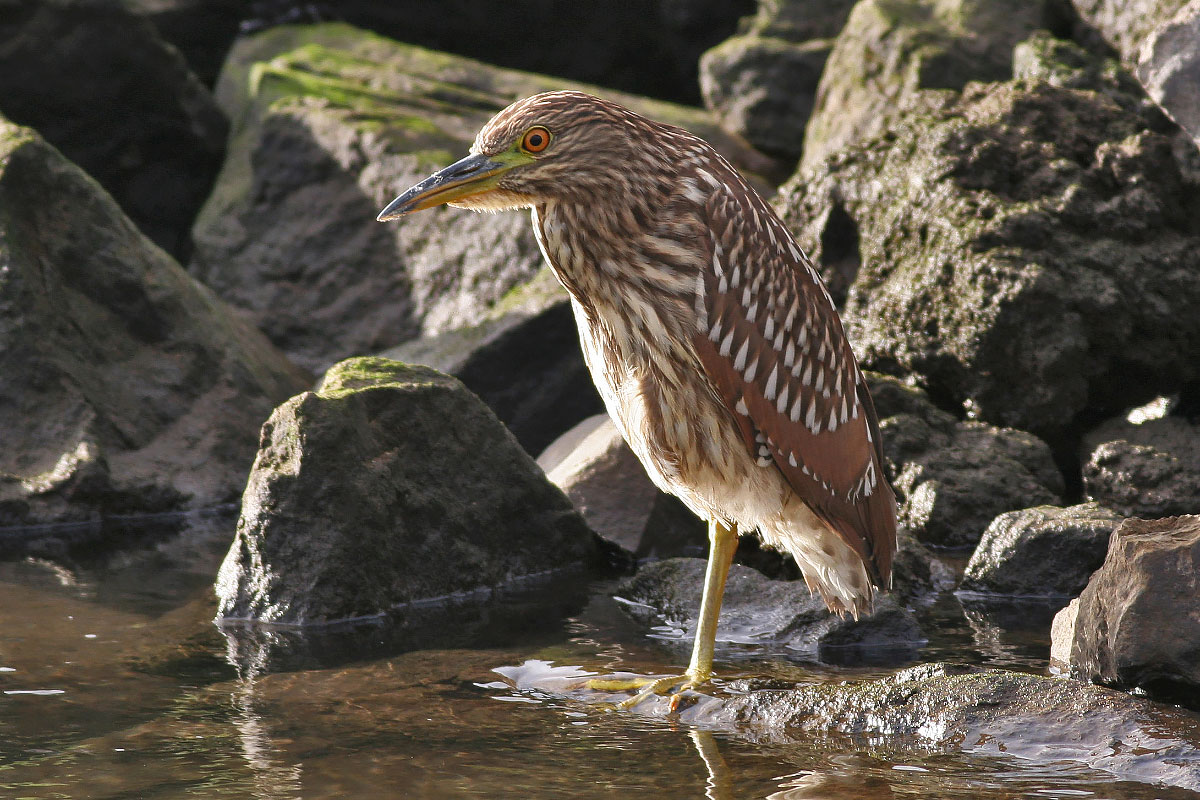 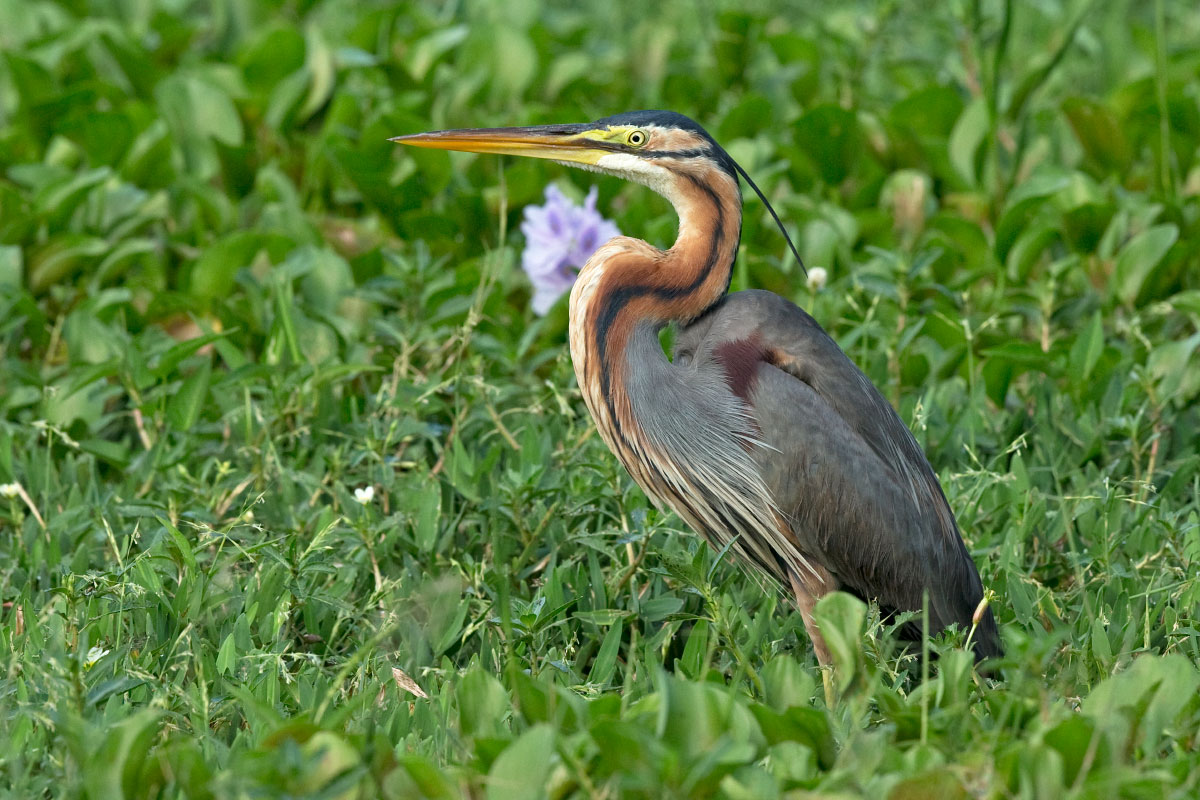 Adult Purple Heron (Debarawewa, Sri Lanka, 9 February 2015). This is a similar view of a Purple Heron to that in the introductory image, but this bird is showing its striped and ginger-hued neck to better effect. The purple 'shoulder' patch is just visible too, though partly cloaked by the elegant, elongated neck feathers. Note also the small-looking eye and long, dagger-like bill (Robin Chittenden). 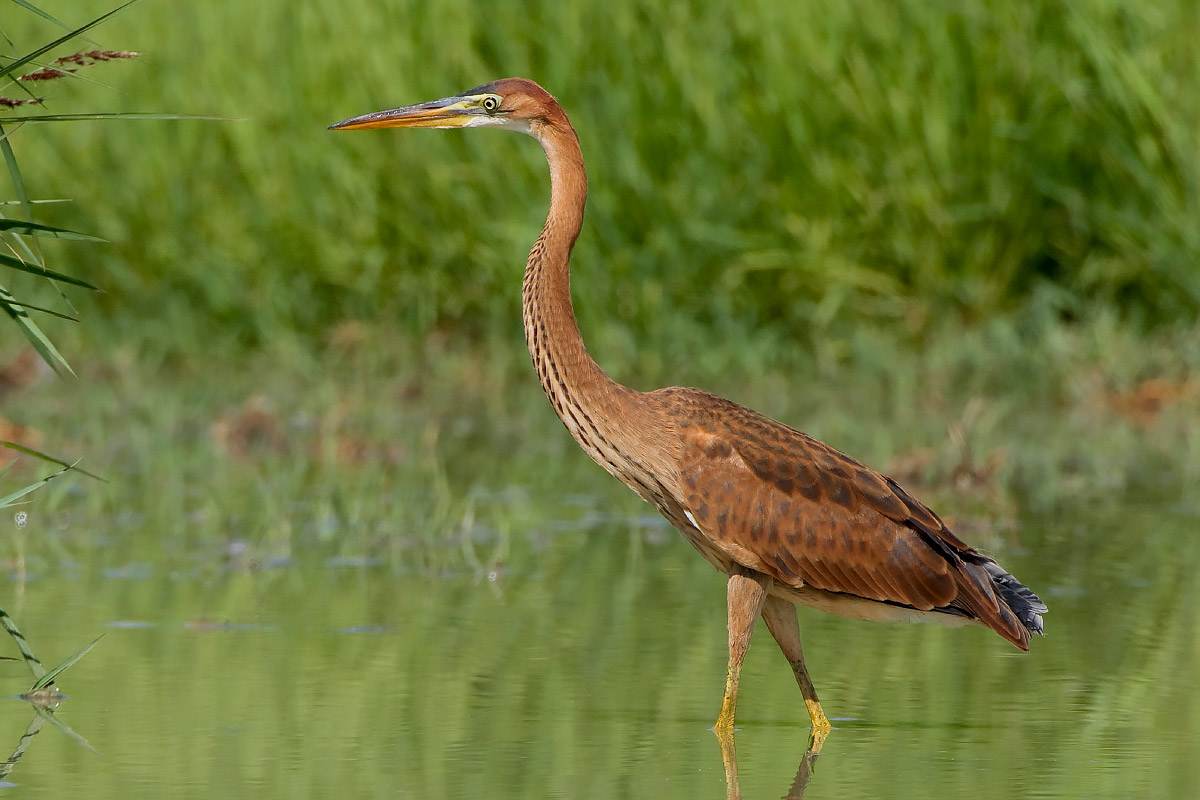 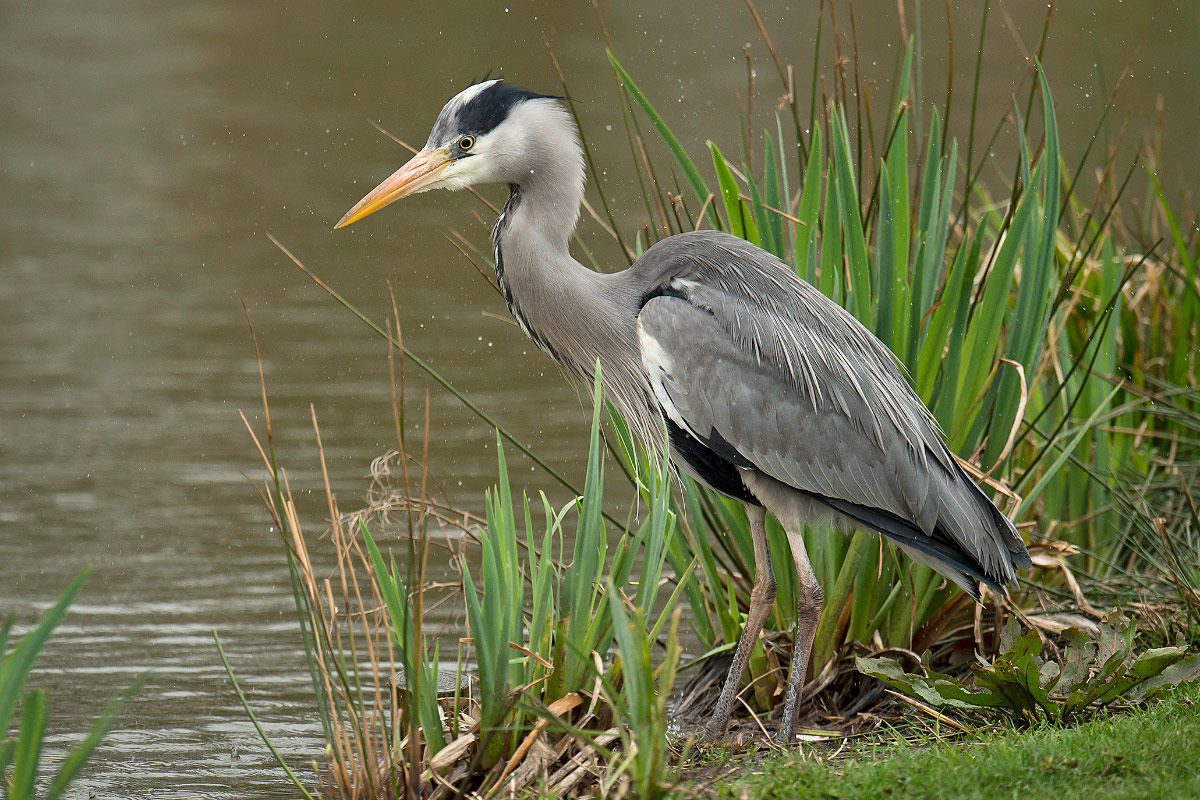 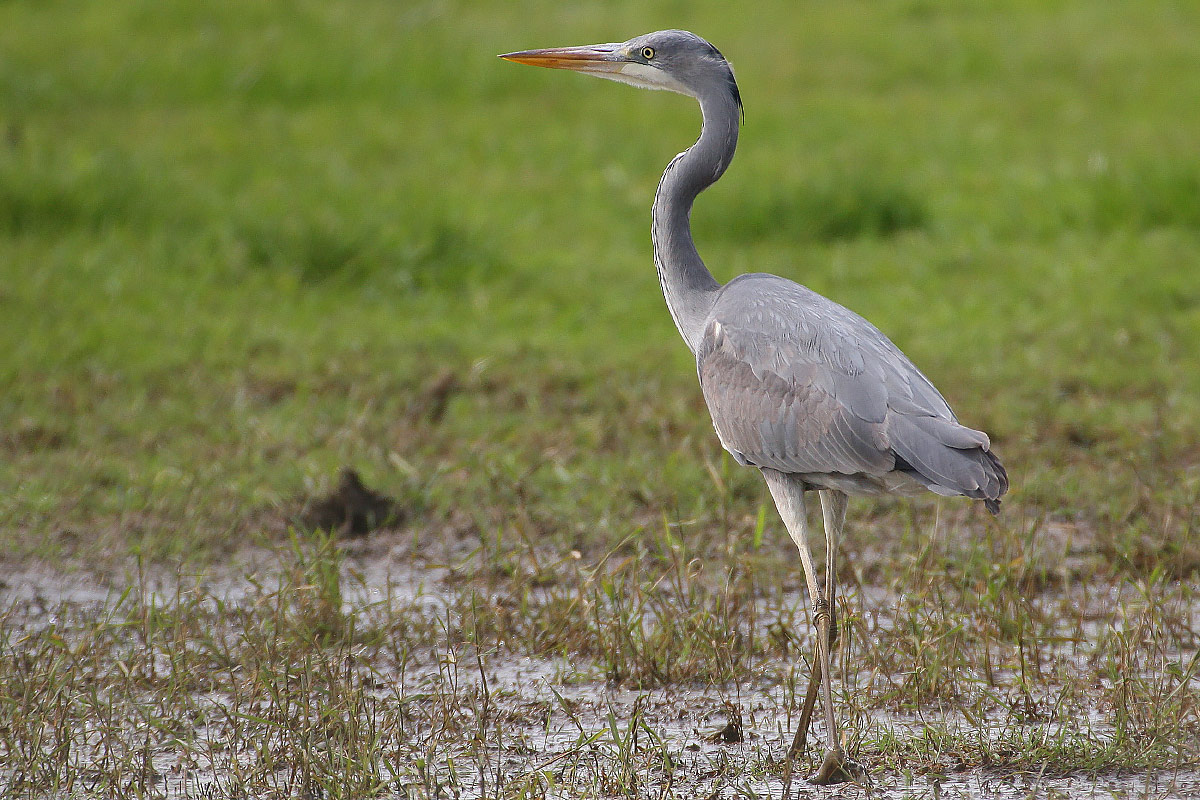 Juvenile Grey Heron (Fen Drayton, Cambridgeshire, 4 May 2014). Although also an elegant bird, this Grey Heron is nowhere near as slender as its Purple Heron cousin. Its identity is also quickly confirmed by its overall grey hues and, as in its cousin, a rather bland face and – just visible – weak neck markings (James Hanlon).