A new study from The Condor: Ornithological Applications has concluded that populations of two endangered seabirds, Hawaiian Petrel and the Newell's Shearwater, have exibited worrying declines on the Hawaiian island of Kauai in recent years.

Monitoring these species, which are nocturnal and nest in hard-to-access areas, is challenging, but observing the movements of birds via radar has given researchers a solution. To assess the population trends and distribution of the birds in recent decades, André Raine of the Kauai Endangered Seabird Recovery Project and his colleagues examined past and contemporary radar surveys as well as data on the numbers of shearwater fledglings rescued after being attracted to artificial lights. Their results shows continuing population declines in both species over the last twenty years — a 78 per cent reduction in radar detections for Hawaiian Petrels and a 94 per cent reduction for Newell's Shearwaters, with the shearwater decline mirrored in decreasing numbers of recovered fledglings over time.

For the shearwaters, this is consistent with previously published work, but past analyses of petrel radar data suggested their population was stable or potentially increasing. The researchers attribute the difference to the fact that for this new study, they carefully standardized the data based on sunset times, which ensured that the time periods (and thus bird movement periods) under consideration remained constant from the beginning to the end of the survey period. They believe that the steep declines may have commenced in earnest in the aftermath of Hurricane Iniki in 1992, which led to permanent ecological changes such as the opening of new routes for invasion by exotic predators and plants, as well as significant infrastructure changes across the island. 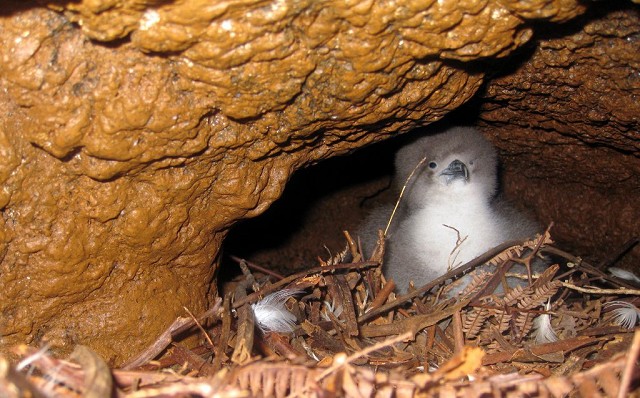 A Newell's Shearwater chick in a burrow (Andrew Raine).

"These seabirds face a wide range of threats," says Raine. "Conservation effort needs to be focused on reducing power line collisions, fall-out related to artificial lights, the control of introduced predators, and the overall protection of their breeding habitats. Many of these efforts are now underway on Kauai, and I am hopeful that these will continue and expand over the next few years. Ultimately, the conservation of the breeding grounds of endangered seabirds on Kauai is actually the conservation of our native forests and watersheds, with far-reaching benefits for other native plants and birds that rely on these habitats, as well as — ultimately — ourselves."

"It is important to publish this information so that everyone can better understand the severity of the declines in these species and the threats they face," agrees Pacific Rim Conservation's Eric VanderWerf, an expert on Hawaiian seabirds. "We need to consider these data in order to make informed decisions about the best conservation measures."