Postcards from the edge: autumn in Filey – part 1

An east-coast bird observatory as a backyard playground, autumn in full swing, and the decks (and diary) duly cleared. Sounds like paradise, I know, and on those occasions when events, conditions and luck conspired accordingly, it was; the season that is quietly ebbing away as I write delivered its fair share of memorable experiences here in my adopted manor, a personal flavour of which follows.

On many occasions, of course, it was rather less glamorous, with notebook entries oscillating wildly between the mundane, the mediocre and the magical (and, more often than not, the somewhere in between). But the enjoyment of patch birding here in Filey, like anywhere, is entirely contextual; where there's muck there's brass, and where there's toil there's inevitably reward. Judging success purely on a connection rate with rarities, for example, is a sure-fire shortcut to burn-out, but with a broader, less blinkered perspective the rewards are rich and varied.

Despite sharing bird observatory status, and the same stretch of coastline, with Flamborough and Spurn, Filey is naturally overshadowed — literally, in the case of the former — by both, and comparisons are, at best, unrealistic. But while the obvious pull of the aforementioned honeypots (for both birds and those pursuing them) is entirely justified, Filey's status as a somewhat darker horse with a long-gone heyday was one of many good reasons to embrace its more modest charms.

And while there may not be the same opportunities for rarity-finding and glory-seeking, as a place to holistically soak up the esoteric wonders of migration — and to clock up a tidy self-found haul while you're at it — it'll do more than fine. With rocky shoreline, coastal scrub, fields and hedgerows, sandy beaches, two small wetland reserves, and an expansive, sheltered bay within ten minutes of the front door, not to mention a purpose-built seawatch hide a short amble along the beach, as doorsteps go it takes some beating. 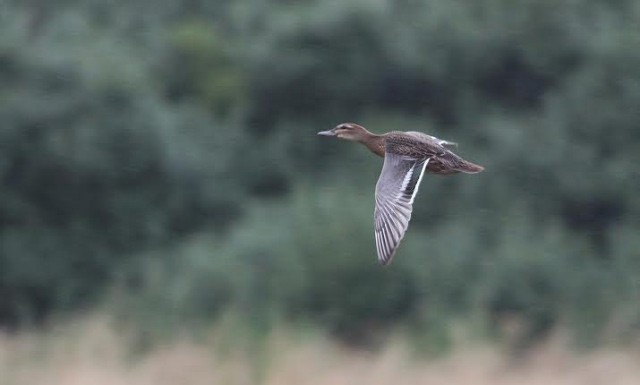 As someone unhealthily obsessed with patch-birding for too long now, most notably in recent years at Stoke Newington Reservoirs — deep in the dark heart of east London — the variety of habitats here in Filey, along with an infinitely more advantageous geographical location, naturally equates to another birding world altogether. At the same time, there's a certain continuity to be found in one's past and present stomping grounds being defined (within differing contexts) as archetypal underdogs, providing a welcome extra shot of bloody-mindedness when out in the field.

Arriving back on the Yorkshire coast last March after a lengthy absence, I hit the ground running and was blessed with a wonderfully high-scoring spring. Last autumn, meanwhile, included a magical five hours on the last day of August which saw the best counts (and point-blank views) of storm-driven skuas in years; an unforgettable morning in late September, which provided me with Greenish Warbler, Wryneck, Barred Warbler and Red-breasted Flycatcher (among many others), all in same small stretch of migrant-laden, rain-soaked hedgerow; and three fogbound days in mid-October which saw a record-breaking arrival of thrushes, with five figures of Redwings, Fieldfares and Blackbirds carpeting all available terra firma, from the wave-battered rocks on the Brigg to the mist-shrouded northern stubbles.

And while the privilege of enjoying all the above (and plenty more besides throughout the autumn) was far from lost on me, compared to the spring, the season as a whole was somewhat more sobering, at least where landbirds were concerned. Periods of promising conditions, depositing riches elsewhere on the coast, frustratingly failed to produce, despite best efforts and more hours in the field than I care to think about; on reflection, a valuable lesson in tempering expectations for the long game.

Fast forward to this year, and after a sun-drenched, cetacean-themed summer to remember (previously described here and here), I spent much of an equally balmy August enjoying the undisputed the stars of the early autumn: waders and seabirds. My time in the field was divided largely between the Dams — a small but perfectly formed wetland reserve nestling innocuously behind a housing estate on the edge of town — for a rich and varied turnover of passage waders, and the Brigg — the wave-smashed, rocky promontory forming the bay's northern border — for various coastal species. Not the worst choices in the world, especially within little more than a stone's throw of the house. 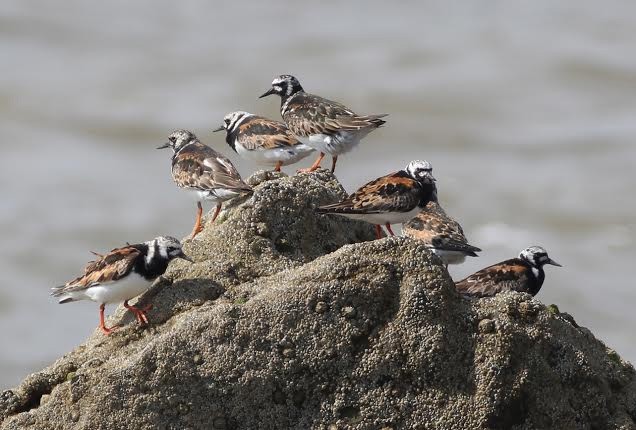 Turnstones are omnipresent on the Brigg in all seasons excluding midsummer (Photo: Mark James Pearson) 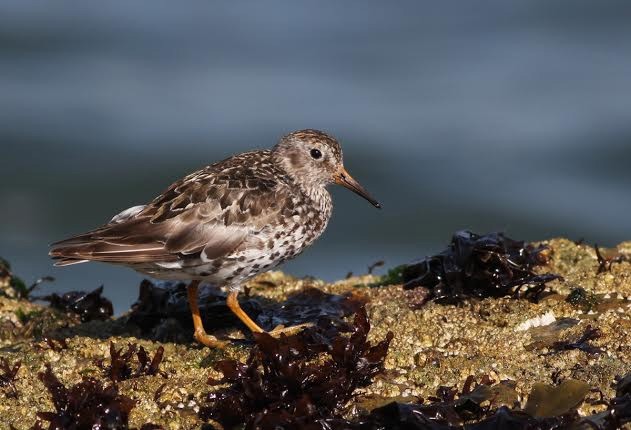 ...and only a few weeks pass without the presence of Purple Sandpipers, with small numbers back on the Brigg in August (Photo: Mark James Pearson)

Over the following few weeks, the muddy pools at the Dams attracted a fine cast, with each thunderstorm depositing new riches and therefore many a contented session spent on stake-outs in the East pool hide.The Brigg, meanwhile, is a magical place at any time of year, whether from the hide for fly-bys or from its surf-smashed edges and platforms for loafers and feeders. Despite its understandable popularity with tourists (particularly during the high season), it's similarly magnetic for waders and various other species, and provided new adventures pretty much daily throughout the month. 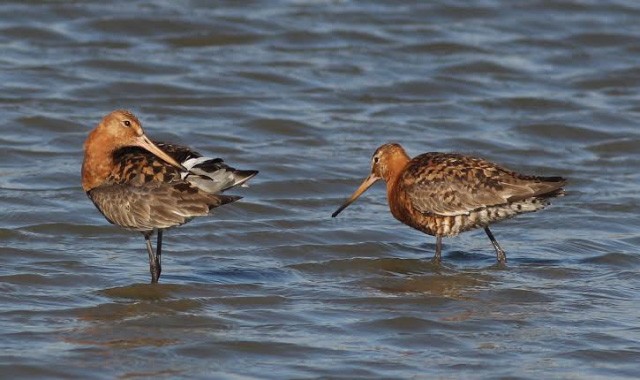 Black-tailed Godwits, still in their impressive summer plumage, were one of many wader species stopping by in early autumn (Photo: Mark James Pearson) 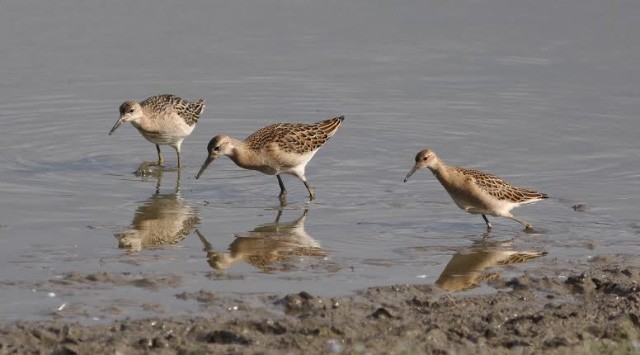 ...and this trio of juvenile Ruff were at the Dams (Photo: Mark James Pearson).

For example: a couple of hours seawatching in warm sunshine on the afternoon of the 11th barely troubled the notebook, but less than two hours later the same formerly blank page bore evidence of a surge of shearwaters including 75 Manxies, five Sooties and a cracking, close-in Cory's, cruising effortlessly north past a feeding party of four Minke Whales. While in the company of various summer-plumaged shorebirds and foolishly tame seal pups a few days later, a distinctive call from above ("like the other terns played backwards", as my wife Amity brilliantly put it at the time) advertised three Roseate Terns patrolling the rocky shoreline. And much more was to come over the following weeks. 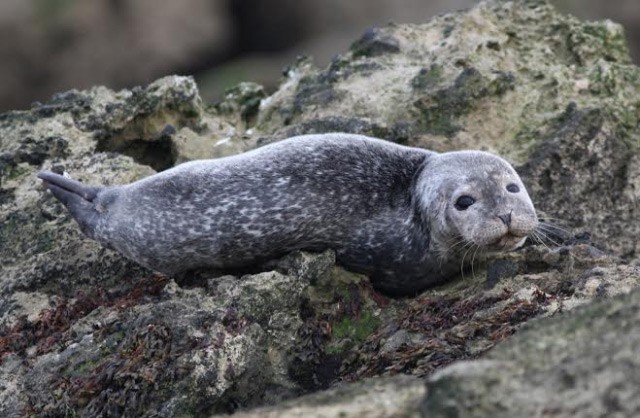 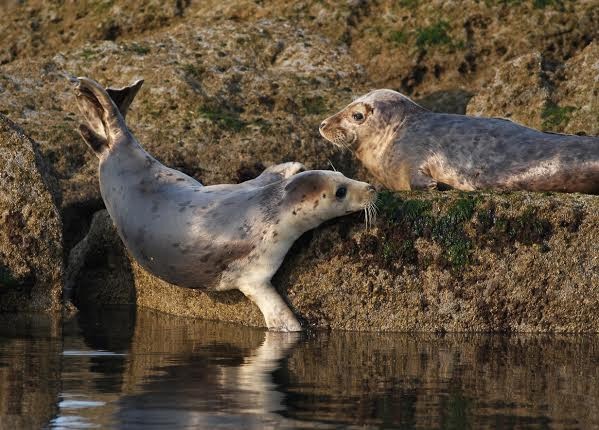 ...while young Grey Seals brought plenty to the table in the early autumn, much of it comedy-related (Photo: Mark James Pearson)

With so much else to enjoy, the fact that the month appeared to be passing without any real passerine action barely registered; the weather maps for the bank holiday weekend, however, suddenly bode well for seabirds and inbound migrants, and the last week of the month delivered the first real fall of the season.

Mist, intermittent drizzle and favourable winds on 24th loaded the die in favour of the land, and so the first of many fine-tooth combings of the coastal circuit beckoned — incorporating Carr Naze (the grassy plateau crowning the Brigg, and 'first contact' for new arrivals), Top Scrub (the first real cover available after the North Sea crossing), and various other local hotspots. But with limited returns after many hours in the field — Pied Flycatcher, Redstart, Tree Pipit, Whinchat, Willow Warblers and Wheatears (and dozens of Painted Ladies) on Carr Naze, and a small scattering of migrants elsewhere — hopes of much more steadily disappeared as the fog descended.

Come the 25th, and after a similarly promising first-light start again failed to deliver more than a light scattering of new arrivals, a strengthening northerly tempted me down into the hide; back rolled the mist, and three hours quality seawatching followed, including four Black Terns and a gorgeous, pristine adult Long-tailed Skua. Duly revitalised and with passerines (including a Redstart and several Wheatears) arriving in off the sea and onto the rocks, I ascended the slope again, and was soon barraged with texts as my mobile reception kicked back in.

All were from local birding friends, and all told of classic early-autumn scarcities continuing to make landfall along the coast, either side of Filey. An entertaining haul over the next few hours included twenty-odd Pied Flies, Whinchats and Lesser Whitethroats into double figures, thirty-odd Willow Warblers, a few Garden Warblers, a juvenile Cuckoo and more; but, plagued by disturbance not only from countless canines and their zombified human charges but also the ever-increasing ranks of day-trippers, the clock was running down, and the odds of finding something special were lengthening. 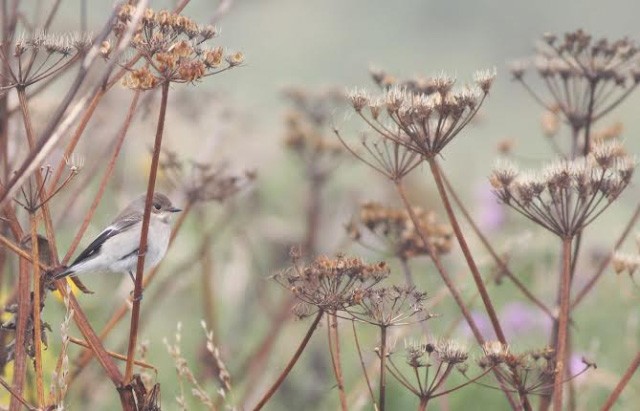 By the evening I'd been in the field for twelve hours, engaged in a vaguely perverse but familiar battle to draw out the last few drops of almost-spent concentration and focus. As I stood in the Top Scrub again beneath a dark, seemingly empty canopy, finally an encouragingly shaped movement shuffled forth against the light, obscured by foliage; a challenge on its own, but with additional distractions within a few metres in the form of a sunburned beer monster belting out tone-deafeningly loud Elton John singalongs from his car stereo, and thick black smoke billowing through the trees from one of many lighter-fluid-flavoured barbecues, an altogether more demanding proposition.

Fifteen minutes and slightly better views later, and I finally had it nailed — a very welcome Icterine Warbler, my fifth, and hardest-earned, since arriving last spring — and against all odds, nobody had to die (this time at least). Was it worth it? Absolutely; it may not have been the most auspicious start to the season, but it got Filey on the scorecard and a monkey off my back. 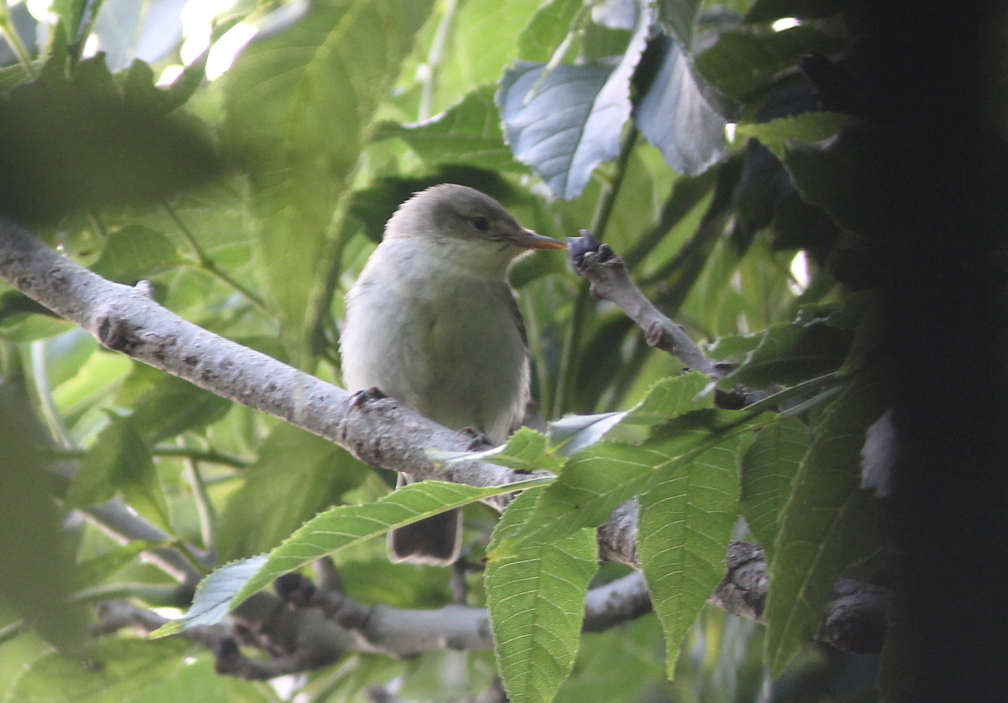 You'd have thought I'd have learned my lesson by the final few days of the month, but stubborn persistence with the land went essentially unrewarded, and an overflying Crane (luckily for me, my ninth on the patch) was the pick; but the sea, of course, continued to provide. A warm and sunny 27th with barely any wind hardly inspired, but a brutish Pomarine Skua, a Balearic Shearwater, four Sooties and a supremely tame Curlew Sandpiper on the Brigg proved otherwise; better still, a lazy afternoon seawatch on the 28th provided summer-plumaged Red-necked Grebe, five Black Terns, a Velvet Scoter and a heart-stoppingly beautiful adult Sabine's Gull. A fittingly special end to the month. 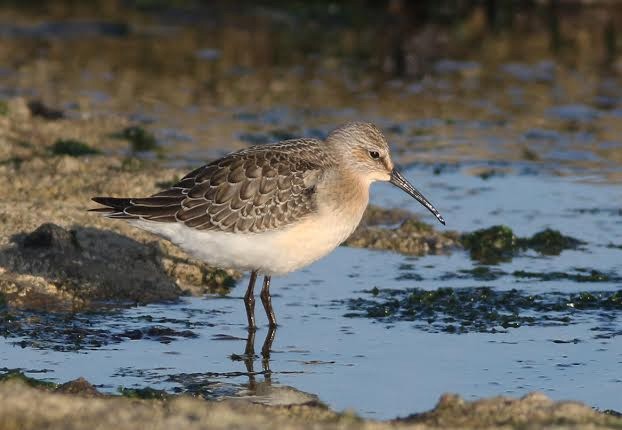 So with August over and done with, migration primetime approaching fast and plenty of spare time in the bank, there was everything to play for as September began...