Please give House Martins a chance

BTO scientists are pleading with Britain's homeowners to be tolerant of the mess made by House Martins, especially this year, as numbers seem to be down on normal levels. They are also asking for people to take part in a new House Martin Survey launched on World on the Move, the Radio 4 series that focuses on migratory species. 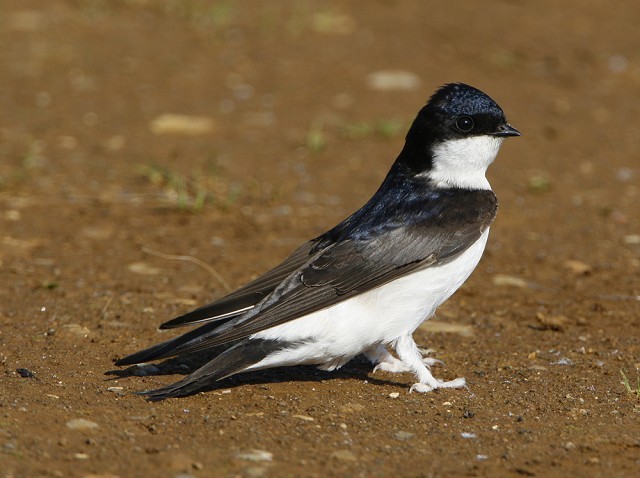 House Martins breed under the eaves of houses and other buildings. Many people really treasure these summer visitors, waiting anxiously for their arrival in April or May, and marvelling as they dive into their nests, made of mud and lined with feathers. For these people, finding discarded eggshells and piles of droppings under a nest is a sign of a successful breeding season, even before the first begging youngster pops its head out of the entrance hole.

For other people, House Martins are a nuisance. In an attempt to avoid having to cope with a bit of mess, some people knock down House Martin nests - even in the breeding season, when there are youngsters inside. This is illegal. There are several possible solutions to lessening the mess. You could try: 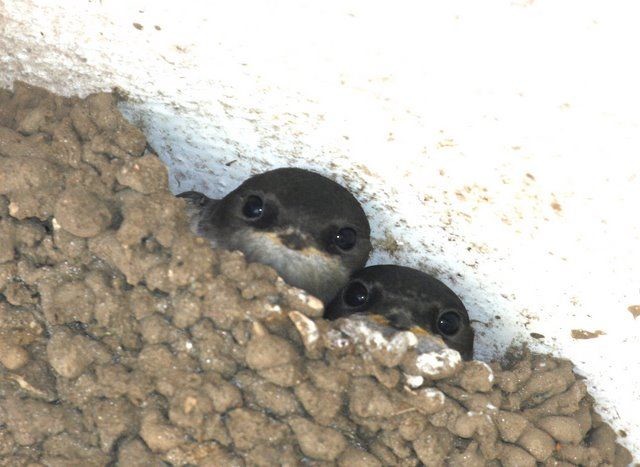 Having travelled thousands of miles from equatorial Africa and apparently having faced some really horrible spring weather in southern Europe, it seems just a little unfair that a pair of House Martins will find that last year's nest has been knocked down by house-proud homeowners. If birds can re-use a nest from a previous year, they save themselves up to ten days of work. Most House Martins breed under the eaves of houses and other buildings. They often breed in groups and nests are sometimes joined together in terraces. Mud is collected from the edges of puddles and streams. Birds rarely travel more than 150 metres to collect mud.

As part of the new national Bird Atlas project, BTO scientists are keen to know where House Martins are breeding this year. They would also like to know whether there are fewer nests this year than last year. Launching the survey with Philippa Forrester on World on the Move on Radio 4 the BTO's Graham Appleton said, "We are pleased to be working with the BBC Radio 4 World on the Move series, to look at what is happening to House Martins this year. With the help of volunteers, we shall be able to produce a House Martin map for the new national Bird Atlas project and hopefully get a first indication of just how serious losses have been since last year."

Graham went on to say, "House Martins are believed to spend our winters hunting for insects over the forests of equatorial Africa. They fly north in the spring, crossing North Africa, Spain and France and arriving here in April and May. Birdwatchers contributing to BirdTrack, the joint BTO, RSPB and BirdWatch Ireland project to collect bird records, are worried that far fewer House Martins made it back this summer. They may have been adversely affected by poor spring weather in southern Europe."

Mark Grantham, who runs BirdTrack writes, "All summer we've been receiving emails and phone calls from recorders, wondering where their House Martins are and concerned at the lack of birds at traditional breeding sites. It appears that a few House Martins arrived quite early, in mid-March, but the main influx of birds was a good week later than in recent years. All our birds have arrived now and most will be hatching chicks, so it does look like we're missing a lot of our breeding birds."

To get involved in the House Martin Survey, visit www.bto.org and click on the House Martin link or phone 01842 750050 and ask for a survey form. Volunteers will be asked to count the nests on their houses and to look for evidence that chicks have been produced; discarded eggshells and piles of fresh droppings. Additional nest counts from 2007 will be exceptionally valuable.
Written by: BTO
Login to leave a comment
Return to List