The brain function of important pollinators can be affected by pesticides even at low concentrations, say scientists. The study, published in Nature Communications, finds that neonicotinoid and organophosphate pesticides disturb the function of the honeybees' learning centre in the brain. "These pesticides, at field-relevant concentrations, cause hyperactivity very quickly," says Dr Chris Connolly of the University of Dundee, one of the study's authors. "The prediction is that the bee is not able to learn efficiently. You would expect all higher-order functions to be affected, so that's their ability to learn, communicate and navigate. Bees are social insects and their efficiency relies on the fact that they share information. They must be able to share information on new food sources and hive sites and they must be able to learn new food sources."

Connolly and his team find that because the two pesticides affect the same part of the brain in the same way, using them together makes the problem even worse. "Both pesticides have exactly the same effect. They work additively with one another," he says. The news comes in the same month that the EU failed to agree a ban on neonicotinoid pesticides after 14 of the 27 member states declined to support the European Commission's proposals. Many cited a lack of scientific evidence that bees were affected at the low concentrations experienced in the field. The proposals are expected go before the member states again. 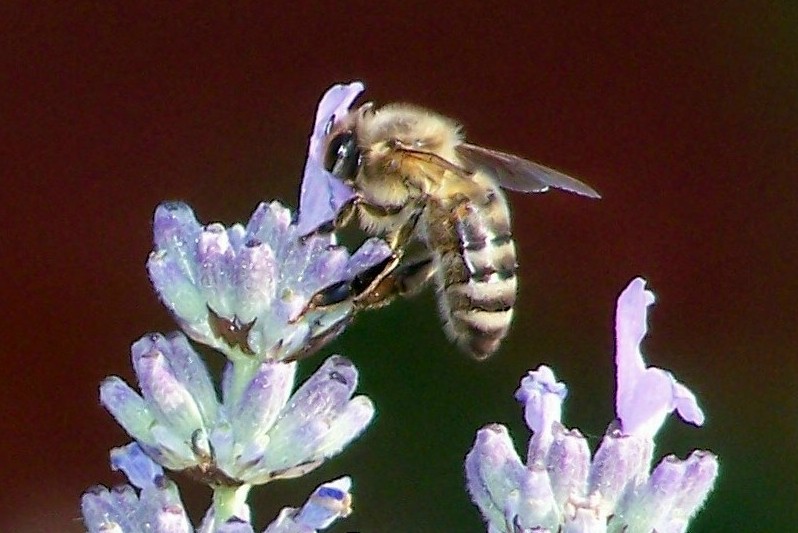 Farmers use neonicotinoid pesticides to protect their crops from insect pests. The chemicals are not intended to harm pollinators, which play a vital role in food production, contributing an estimated £440 million to the UK economy every year. The organophosphate coumaphos is designed to attack the Varroa parasite, thought to be a major factor in honeybee decline, but the study suggests it may actually be harming the bees. Coumaphos is not licenced for use in the UK but is used widely in the USA, which has seen higher rates of honeybee decline in recent years.

The team examined the effects of the pesticides on an intact half of a honeybee brain, focusing on the area of the brain that handles learning, known as the mushroom body. Previous studies had looked at disconnected brain cells in controlled conditions using a process known as cell culture but, according to Connolly, those studies were not getting the full picture. "You can look at cells in culture but they don't operate exactly in the same way they do in a functioning brain," he says. "They needed 1000 times higher concentrations of neonicotinoids to have the same effect. We looked at half a brain, which has full functionality, and looked at the effect of these pesticides at lower, more realistic, concentrations."

Connolly says similar effects on learning would be expected for other important pollinators, although the extent of those effects for individual species remains unknown. But he is concerned that banning neonicotinoids could open the door for untested alternatives that could do even more harm. "Direct comparisons of alternative compounds should be made and this should inform policy choices," he says. "We also need to know which compounds work together to increase risk. Pesticides need to be tested for chronic exposure and at multiple levels; pharmacologically, physiologically, at the hive level and at the ecosystem level. The real question is: how did we get into this devastating position in the first place? We have to find a way to sustainably interact with our environment to feed ourselves."

The study was jointly funded by NERC, Defra, BBSRC, the Scottish Government and the Wellcome Trust under the Insect Pollinators Initiative.