It's late afternoon and a wavering mist clings stubbornly to the surrounding hills. The light is low and the valley silent save for the occasional insect or bird betraying its presence. There is an eeriness to the atmosphere, which is amplified as a few light raindrops begin to fall. The occasional hummingbird squeaks as it zips past: Sparkling Violetear, Chestnut-breasted Coronet, White-bellied Woodstar …

But there is one particular hummer that draws birders to this small pocket of the northern Peruvian Andes. It is the reason we've ascended from the oppressive heat of the Marañón valley floor to the altogether cooler transitional forests at Huembo, at an elevation of around 2,000 m. Almost solely restricted to the eastern slopes of the Río Utcubamba Valley, Marvellous Spatuletail is not only localised and rare but also one of the most spectacular of all its family: males are instantly recognisable by their remarkably long outer tail feathers, which cross over and are tipped by the glossy 'spatules' that give the bird its name.

Fortunately it's not long before we witness this most desired of all Peruvian endemics. Lightning fast, a male shoots across the clearing in front of us and hovers at a flower, the outrageous tail feathers bouncing around with a life of their own. Over the next half hour we're treated to several more exhilarating views of the species, including one briefly perched, its uncompromising energy a stark contrast to the dreary half-light that is gradually enveloping the valley. 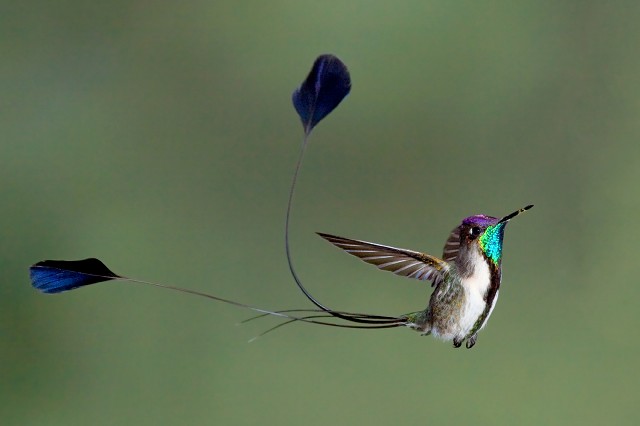 Marvellous Spatuletail is one of the most spectacular of all hummingbirds (Dubi Shapiro).

Northern Peru is one of the least-known yet most endemic-rich areas of South America, and the spatuletail forms one of the cornerstones around which the Northern Peru Birding Route, as it has been named, is designed. The distance between the trail's eastern outpost in Tarapoto and Chiclayo on the Pacific Coast is around 250 miles as the condor flies. Yet the significant presence of the Andes between these two localities ensures that this relatively small area is blessed by an overwhelming array of habitats and micro-climates.

Such vast diversity naturally equates to an incredible bird list. A three-week tour along the main route and its subsidiaries can notch up more than 700 species; our own seven-day trip was undertaken at a fairly relaxed pace and yet we still scored more than 300. In addition to the dozens of endemics there is a whole host of range-restricted and endangered species which only serve to reinforce the potent appeal of this unique region.

'Endangered' and 'threatened' are words saddeningly prominent when looking at the status of many of the route's most appealing birds. Like many other areas of South America, Peru has been subjected to widespread (even catastrophic) habitat destruction, notably deforestation, with this still continuing today.

The designation of nature reserves and national parks is vital in the preservation of many species, and there are a number of these along the route — some well-established, others embryonic. Eco-tourism plays a crucial part in their continued existence, and the increasing recognition of the Northern Peru Birding Route as one of the ultimate Neotropical birding experiences at least bodes well for its future.

Our trip commenced in Chiclayo, to the west of the Andes. The Tumbesian region lies in the rain shadow of these mighty mountains and is naturally arid. Habitats include a blend of dry forest and semi-desert which support a number of Tumbesian endemics. In the acacia forests of Bosque de Pómac, listen out for a sound reminiscent a fisherman's reel losing line to a hooked fish — the source is the endangered Peruvian Plantcutter. A visual highlight is Rufous Flycatcher, unique among its genus for its orange-and-brown plumage. 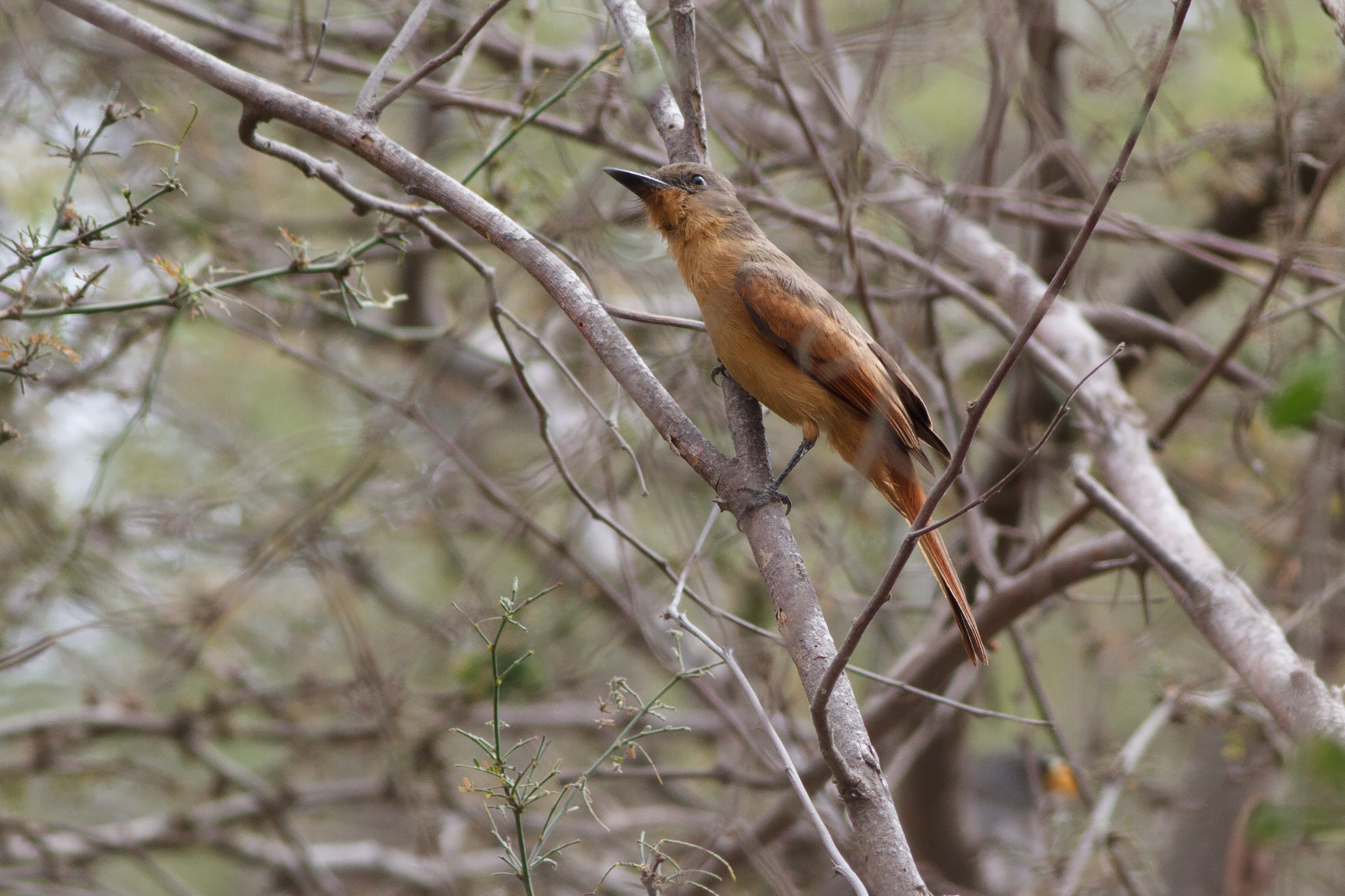 Not far away, in the foothills of the Andes, lies the Chaparri Reserve, the site of a reintroduction scheme for the critically endangered White-winged Guan (truly wild guans can also be seen in the surrounding forests). At ground level you are likely to find the stunning Elegant Crescentchest, which is surprisingly elusive despite its eye-catching appearance. Gaudy Vermilion Flycatchers, however, are both conspicuous and abundant, though it is a black-and-yellow flycatcher that is the real prize: Tumbes Tyrant, another near-endemic.

A trip to higher ground at nearby Casupe brings with it further dry forest species and, with luck, Andean Condor high over the hills. Back at the lodge, expect a visit from a friendly Sechuran Fox at dinner, its tameness rivalling even the boldest of London's urban counterparts.

Our next destination required a journey through the western Andes. This gives a first taste of the spectacular scale of these supreme peaks and, as we climb, produces further new birds. A chance stop to photograph Black Vultures poking their way around a carcass produces Watkins's Antpitta in adjacent scrub, its comically large eye staring intently at us through the chaparral. 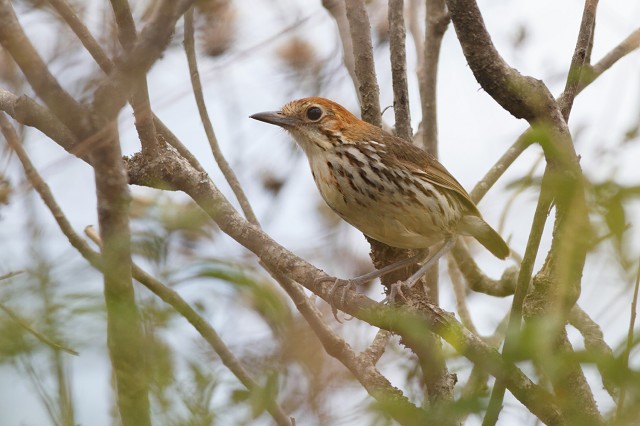 Watkins's Antpitta is another Tumbesian endemic that can be seen well in northern Peru (Josh Jones).

A little later, great excitement begins to unfold as a call of 'condor' comes from the front of the vehicle. Andean Condor isn't rare, but it's the iconic bird of the mountain chain we're crossing and a blockbuster species for most birding trips to western South America. Bustling out of the van, nerves are instantly settled: first one, then two, then a delectable dozen birds silently floating around the canyon on their 3-m wingspans. This truly is a species befitting of its gargantuan surroundings and a bird I'd wanted to see since I was very young.

After a number of welcome distractions en route we reached the city of Jaén, nestled at the base of the Marañón valley, just in time to watch Lesser Nighthawks feeding acrobatically against an ever-reddening post-sunset sky. The Río Marañón forms the principal source of the Amazon and, over millions of years, has carved its path through the middle of the Andes. Left isolated by the huge peaks both to its east and west, the dry river valley forms a self-contained hotbed of endemism and lends its name to a thrush, a critically endangered spinetail and a crescentchest. This last species can be seen just a stone's throw from Jaén and is similar to the previously encountered Elegant, though the coverts are fringed white rather than chestnut and the underparts are a brighter orange. 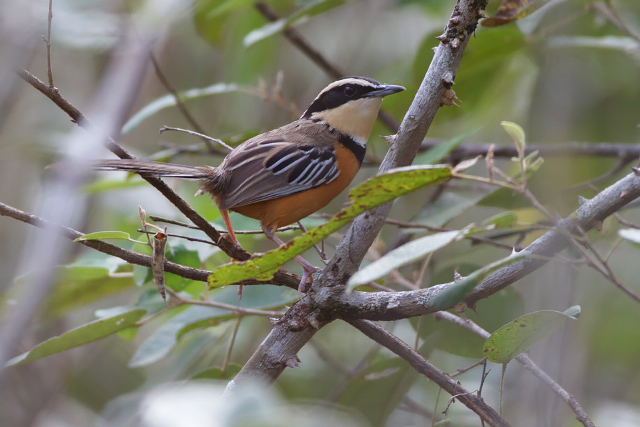 The immaculate Marañón Crescentchest is found only in the river valley that gave it its name (Josh Jones).

Rising east into the Andes once more sees rapid changes in climate and ecosystem. Water is far more apparent as the cast of the Andean rain shadow ebbs away. Drizzle begins to fall and we notch up roadside Torrent Duck and Fasciated Tiger Heron among the cascading rapids at the bottom of a steep-sided, winding canyon. We subsequently ascend to the realm of the spatuletail: a world unrecognisable from the parched floor of the Marañón valley just a couple of hours away.

An hour further east lies the legendary Abra Patricia reserve, situated above 2,000 m. The humid cloudforest here is one of the most ecologically diverse habitats on the planet and, with more than 300 bird species recorded on the reserve, the birding is simply phenomenal.

Long-whiskered Owlet — one of the smallest, rarest and most range- restricted owls in the world — is top of the menu here, but other localised endemics such as Lulu's Tody-Flycatcher, Ochre-fronted Antpitta and Yellow-scarfed Tanager are also headline species. Birds aside, the reserve is home to the critically endangered Yellow-tailed Woolly Monkey, while the nightly showing of moths around the aptly named Owlet Lodge is a spectacle in itself. The lodge, nestled in a spectacular valley carpeted by virgin forest, is the essential base for anyone birding this area of northern Peru, and the surrounding reserve is worthy of at least two full days' exploration. 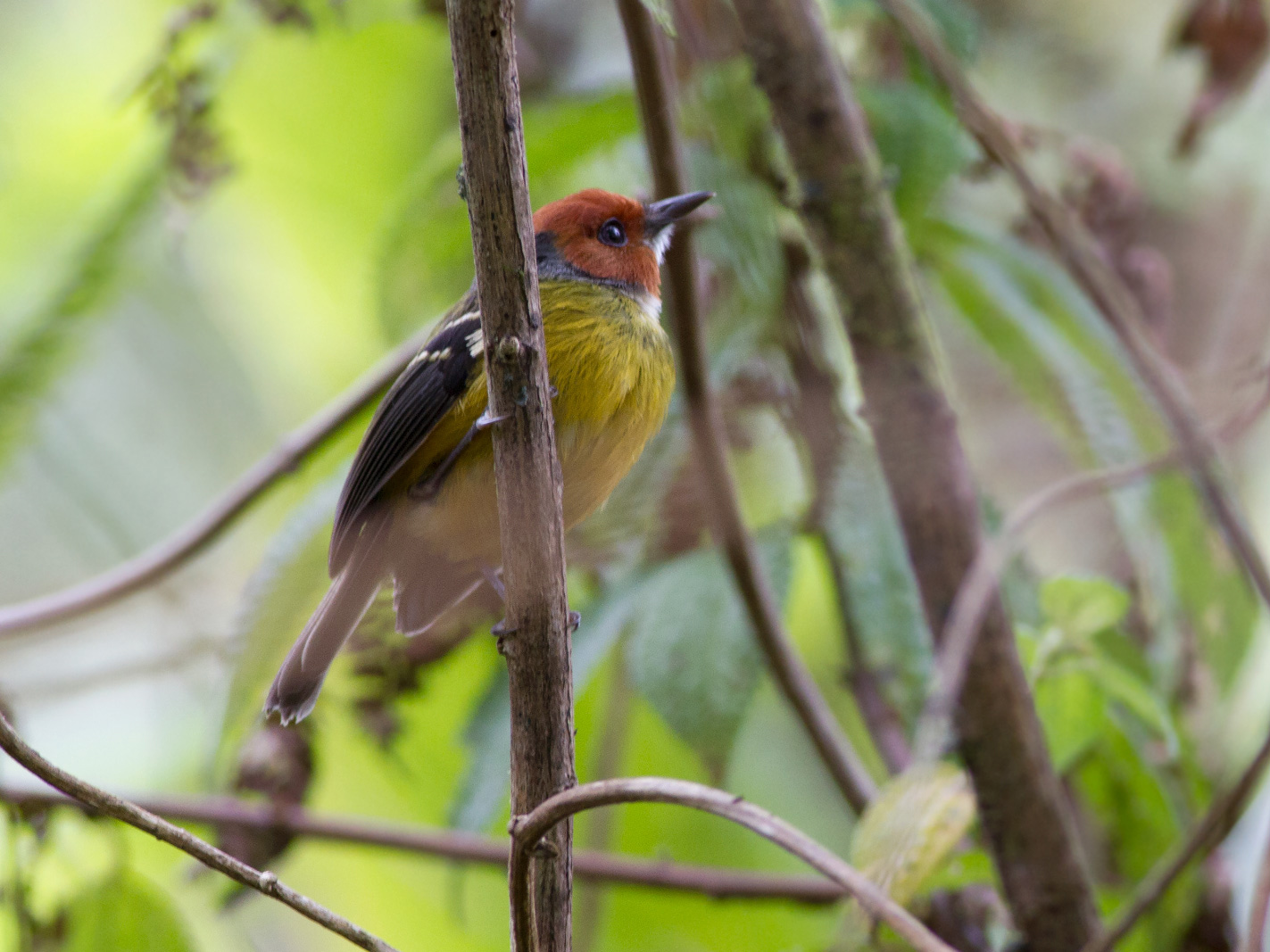 Another Peruvian endemic is the tiny but beautiful Lulu's Tody-Flycatcher (Josh Jones).

Descending slowly eastwards to the steamy, forested lowlands of Amazonia produces a plethora of species as both the climate and habitats change again. As is typical for the Neotropics, the composition varies with altitude and new birds were still coming thick and fast as our trip concluded in Tarapoto. There were many highlights there, but those that particularly stand out include a remarkably accessible Oilbird colony lurking under a busy road bridge and the feeders at Waqanki, which offer an almost overwhelming experience as literally hundreds of hummingbirds — including the stunning Rufous-crested Coquette — zoom about you. The bizarre sight and sound of lekking Andean Cock-of-the-rocks is encountered at several locations. Overhead King Vulture, Plumbeous Kite and Black-and-white Hawk-Eagle each cause great excitement, while the forest canopy is full of seemingly limitless tanagers, woodcreepers, antbirds and plenty more besides. 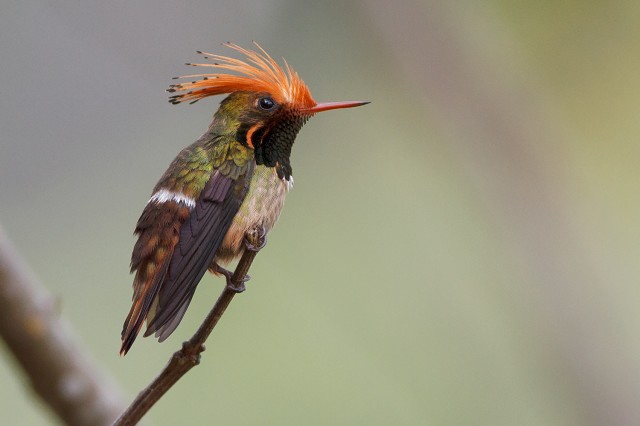 Rufous-crested Coquette was arguably the most extraordinary of the 40+ species of hummingbird in little over a week (Josh Jones).

Northern Peru is one of the most incredibly bio-diverse parts of the world. Its avifauna is spectacularly varied and the birding here impresses even the most road-hardened world birders. With such a range of fantastic habitats accessible over a small area, it is no wonder that the Northern Peru Birding Route is rapidly becoming a must-visit destination for birders wanting to experience the Neotropics. My eight-day whistle-stop tour has left me desperate to return, and anyone else visiting this fabulous corner of South America will surely leave just as captivated.

The fully illustrated article can be read in the August 2015 issue of Birdwatch magazine. To purchase a copy of the digital edition, available for iPhone/iPad, Android Tablet/Smartphone, Kindle Fire, PC or MAC, click on one of the following links below.