The end of August saw a large fall on the east coast and for many of us it was the start of autumn, with two months of mayhem to come. Or at least so I thought, as I sat in Hemsby waiting for similar falls to occur throughout September. It never really materialised down here in the south-east: several East Anglian PWC big-hitters only recorded Yellow-browed Warblers or Long-tailed Skuas as their highlights, with very little else to add! As to be expected, Yellow-browed Warblers featured prominently in the highlights submitted by many, with at least 12 patches recording one, or four in some cases such as at The Gramps in Aberdeen. Other classic autumn birds graced a few patches: Wryneck (six patches), Red-backed Shrikes (4), Ortolan (2), Common Rosefinch (2), Barred Warbler, Bluethroat, Red-breasted Flycatcher, Richard's Pipit and Rose-coloured Starling (all 1 patch). All excellent birds and a well-deserved six points for the lucky finders.

It may not have been a rarity-fest everywhere in September, but several patches fared rather well throughout the month. Six patches managed to clock up three or more scarce or better birds during the month; Barrie Hamill on Burray, Orkney managed to find a Western Bonelli's Warbler as well as a Yellow-browed Warbler and Rosefinch, not to mention a Lapland Bunting and Wood Warbler, while Kev Rylands at Dawlish Warren managed to see Red-backed Shrike, Rose-coloured Starling and Buff-breasted Sandpiper. In Northumberland, Alan Tilmouth found Red-backed Shrike and Yellow-browed Warbler while saw Common Crane at Newbiggin. Going one better, Jane Turner's Red Rocks patch produced a haul of two scarce and two rare birds: seawatching gave Long-tailed Skua and Leach's Storm-petrel, and scanning the wader flock finally proved worthwhile when she picked out a Semipalmated Sandpiper. Last but not least was a rather skulky Blyth's Reed Warbler.

A splendid month's patching for all involved, but even they were trumped by three particular patches — unsurprisingly on islands. Moving from north to south, first up is Rob Fray. Rob has featured heavily in many of the highlights during the year and again September was kind to Virkie (Shetland). Best find of the month for Rob was a Lesser Yellowlegs, although a supporting cast of Short-toed Lark, Wryneck, Bluethroat, Yellow-browed Warblers, Richard's Pipit and a twitched Western Bonelli's Warbler isn't too bad either! As if that wasn't not enough, he even managed a bit of 'patch gold' in the shape of a Pintail. Apparently it is rarer than Pechora Pipit at Virkie — how about that for a bit of trivia? 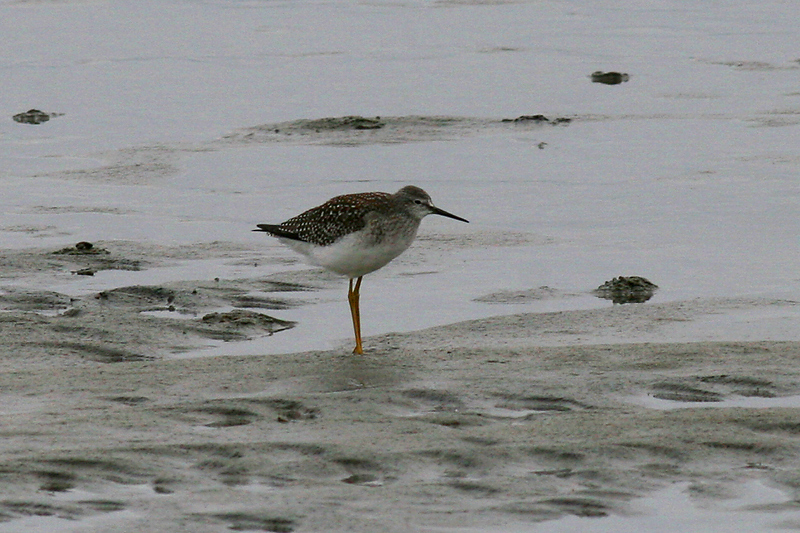 We now make our way down to the west coast of Scotland and to John Bowler on Tiree. Unfortunately, for John, the best bird on the patch was found by someone else but he still picked up a handy four points for the Baird's Sandpiper. At least John picked up the bonus points for the Pectoral Sandpiper, Buff-breasted Sandpiper, American Golden Plover, Yellow-browed and Barred Warblers. And, just like Rob before, he also enjoyed a moment of 'patch gold' — Tiree's second-ever Reed Warbler. That said, John missed out closely when a Cedar Waxwing was found in a nearby garden on the island!

Finally we find ourselves off the coast of Wales on Bardsey. Steve Stansfield, by his own admission, has had a slow start to PWC but September has boosted his totals no end. In all he clocked up eight species that earned him bonus finds points. The obvious highlights were the Siberian Stonechat and Fea's Petrel, with the cracking backup of a Leach's Storm-petrel, Long-tailed Skua, Red-breasted Flycatcher, Yellow-browed Warbler, Common Rosefinch and Wryneck! 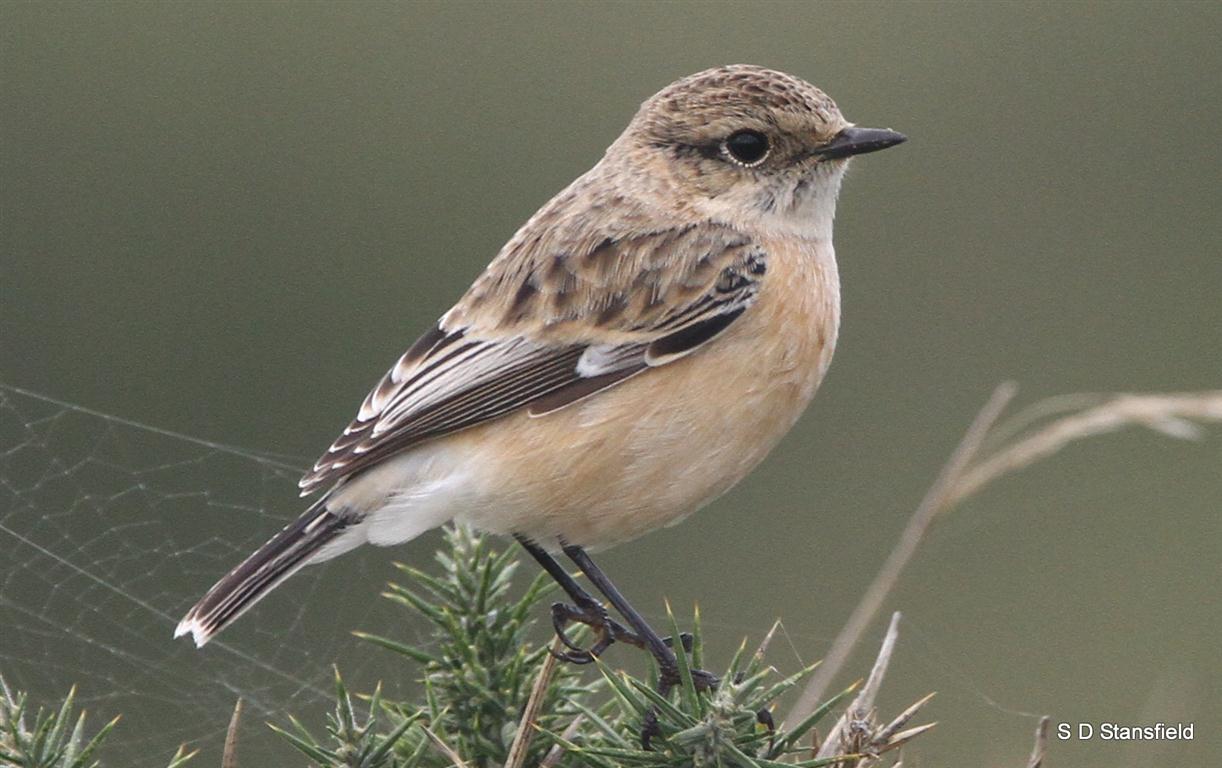 Elsewhere among the abundance of scarcities there were a few more additions to the PWC list. Marcus Lawson found a White-winged Black Tern along the south coast, Paul Higson on Orkney had an Arctic Warbler, and Glossy Ibis made it onto the list when one appeared on Roger Musgrove's patch at Wall Common. Will any of these be in contention to win the Meopta and Forest Optic best find competition?

And finally we move onto the 'patch gold' section to add to the two moments already mentioned. In no particular order we will start with Pete Antrobus, who found a first-ever Caspian Gull for Marbury/Neumann's Flashes (Cheshire). Not too far away, Phil Woollen managed a patch lifer — Water Rail — and a second Redstart in 14 years at Backford Cross. Other notables were a first Marsh Harrier at RSPB Conwy for Julian Hughes, a Nuthatch (2nd or 3rd site record) at Marston sewage works (Lincs) for Dave Roberts, a Jay (patch tick) for Iain Robson at Druridge Pools and an incredible 30 Stone-curlews at Paul Eele's patch in Syderstone (Norfolk).

All these additions have seen the cumulative PWC list creep ever closer to the magic 300 mark: by the end of September the total had reached 296 species. Check out the list on Bubo and keep adding anything new that you find on your patch. There's a good reason for knowing how many species have been recorded on the Patchwork Challenge, and that of course is that each species translates to a pound for the BTO's Out of Africa appeal — specifically, contributing towards data collation from Patch the Cuckoo's satellite tag. This money will be donated very generously on our behalf by Meopta and Forest Optic, and will help ensure we can follow Patch's remarkable progress through Africa this winter.

The points table is incredibly close, only one point separating the top two: Moss Taylor is currently edging out John Bowler, with Rob Fray one good find away from them both in third place. It's not all dominated by the Scottish and East Anglia coast, though, with patches from Wales, northern England, the south-west and Ireland all making it into the top ten.

The comparative table is equally close, with only 0.3% separating the top 2, Roger Musgrove edging out Marc Hughes this time. The top five are separated by 10%, so the top spot is up for grabs!

Moss Taylor again leads the way in the most species seen table as coastal East Anglia dominate the top 3, with Jonathon Gibbs at Minsmere and Simon Chidwick just along the coast from Moss at Felbrigg. The entire top 20 have passed the 150-species mark and it's great to see a couple of inland sites in the mix. 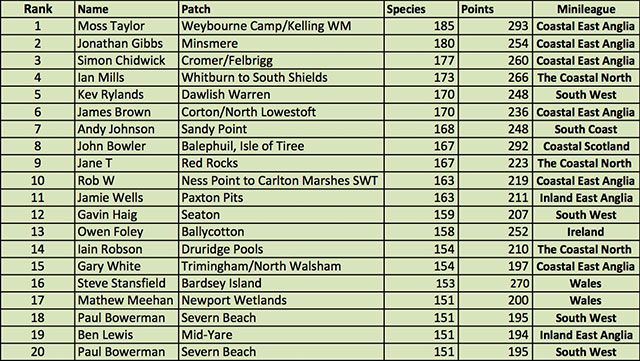 Rob Fray's great September has seen his points per bird average rocket to just less than two points per bird, and he has a healthy lead over Steve Stansfield and John Bowler. Coastal Scottish patches make up six of the top 10, with Owen Foley and Ian Mills flying the flag for Ireland and northern England in the top 10. 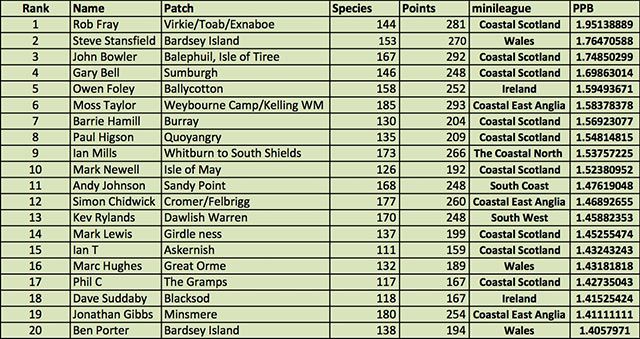 And finally, the inland top 20, where Jamie Wells finally submitted his score for Paxton Pits and jumped straight to the top of the pile. Ben Lewis isn't too far behind and can still pinch the top spot, while Jonny Holliday looks to be safe in third — but you never know what October will bring!

And so we find ourselves in October: the east coast is swimming in migrants, seabirds are hitting inland areas and finally the leaves are falling making it a heck of a lot easier to find stuff....maybe!