I have been watching Pugney's Country Park and Calder Wetlands, on the south side of Wakefield, for over 10 years with varying degrees of intensity. For the last few years I have been more regular and diligent in my coverage and in 2013 I took part in the Patchwork Challenge for the first time. This almost immediately led to an increase in coverage as local rivalries built up and, through various social media outlets, success and failures were the source of much 'friendly banter'! I eventually made it over the line in the #InlandNorth league, largely due to finding the patch's first record of Lesser Scaup in April.

And so to 2014. The number of patches taking part in the competition had increased and, along with old rivals, new challengers appeared. Alongside this was the personal battle of the Comparative Score — could I score as many species and points as last year? This will be the foundation to most people's participation as the competition develops. So how did I do in 2014? This is a short summary of my patch year.

There is always excitement and anticipation for getting the New Year off to a good start. I managed OK with the regular Smew and wintering Chiffchaff among the regular stuff. The gull roost soon gave Yellow-legged and Caspian Gulls, but missing a brief Great Northern Diver hurt! An immature Iceland Gull late in the month was handy as this species tends to be barely annual. The rest of the month was spent mopping up goodies such as Jack Snipe and Willow Tit. 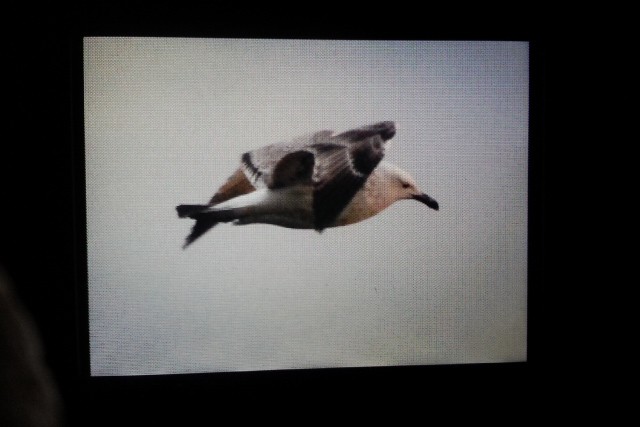 Highlights of the month included Whooper Swan, Mediterranean Gull and, best of all, the only Brambling of the year. Just as interesting to the patchwatcher, though, was the subtle arrival of spring, with the first passage Curlew, Ringed Plover and Oystercatcher late in the month.

More signs of spring, with Dunlin added before the first Sand Martin, Wheatear and Little Ringed Plover. At the end of the month winter bit back with an immature Glaucous Gull in the roost — another tricky species in the bag! The big surprise came on 29th when I found what was presumably last year's Siberian Chiffchaff singing at Calder Wetlands. Unexpected and a very handy boost to the points total!

Summer migrants were now trickling in, including one of Yorkshire's earliest-ever Reed Warblers on 6th. A male Redstart on 12th was another bonus as they are less than annual (although three were recorded on 2014). A Tree Pipit later in the month was similarly well received, but just as tricky for me was a Green Woodpecker — although records are slowly increasing. Arctic Tern passage was good but spoiled slightly by missing a brief Little Tern...you can't see them all apparently!

Often an exciting month, May was actually a little disappointing this year. Sanderling, Black-tailed Godwit and Hobby are all expected and joined some of the later migrants. Barn Owl also made it onto the year list, but I wondered whether this surprise-free month was one I'd live to regret...

The first week or so of the month were spent on Shetland — a great trip but I missed Sandwich Tern on the patch. New birds were now becoming more difficult to find and I added only Little Gull and Black Tern. The latter is always a good bird to add to the list as they have been very scarce of late. I now felt I was falling behind and the banter on social media seemed to be reinforcing this view!

A slightly better start to the month, with Green Sandpiper (always unpredictable here), Little Egret and Nuthatch finally bagged before I headed off to Islay for the small matter of getting married! More time away from the patch and I missed Sandwich Tern — again!

No new species until a Greenshank on 13th and a locally rare Spotted Flycatcher on 20th. A flurry of activity late in the month saw Whinchat, Whimbrel and Common Scoter all clawed back on my competition. My third Sandwich Tern dip (ggrrr!) was somewhat made up for by two Ruff on the last day of the month.

A good start to the month, with four Pintail on 6th, eclipsed by my first patch tick of the year the following day — Spotted Redshank! Later in the month more points were bagged, with a Stonechat quickly followed by Rock Pipit. A good month with plenty of scarce birds but many were already 'on the list' and other competitors were also enjoying a productive September. 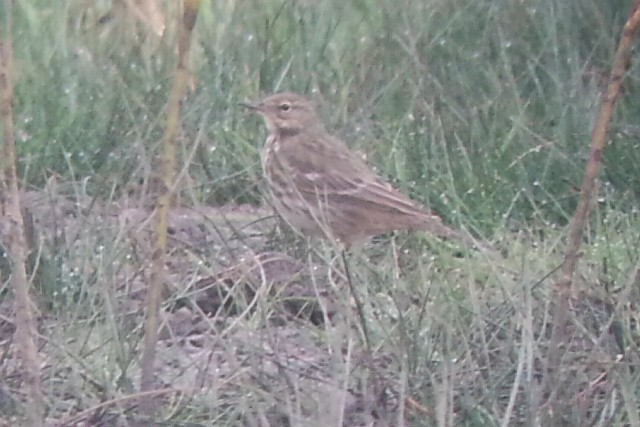 Rock Pipit is always a handy addition for inland patchers.

Often a great month, but for many aspiring rare bird hunters October means islands, and my time on St Agnes, Scilly, meant only one patch visit before 22nd! A disappointing month was salvaged at the death when a Long-tailed Duck was found on 29th, but the trips away were surely costing me valuable points...

One of my favourite patch months, with lots of potential. A good start on 2nd, with Merlin and inconclusive views of a swift species on the same date — one of a number of interesting late records and one that got away? A Common Sandpiper on 9th was more obliging and anything rarer was sadly ruled out. Things improved as the month continued, with Bittern and Woodcock finally ticked. The latter was only a sign of things to come on 23rd when I found only my second patch tick of the year: a Ring Ouzel! Another late record and only present briefly, it showed to just two observers but it made my month — although a Grey Plover on 29th was another bonus. Gulls were also a feature of the month, with several Caspian Gulls appearing regularly.

And so to the finale of the patching year. The gull roost was proving highly interesting, with unprecedented numbers of Caspian Gulls and three different Iceland plus a single Glaucous Gull. With generally settled weather, the chances of anything unusual seemed to be slipping away. And then it happened. Inland patch workers can generally only dream about finding 'the big one', that one 15-pointer that changes the game, but on 8th I stumbled upon mine. That awful sick feeling as you realise you have found one but are alone, the adrenaline when friends arrive and confirm you are not making some horrible mistake. The Blyth's Pipit produced all these emotions and stayed to the year's end, allowing upwards of 2,500 visitors to enjoy it. A first for Yorkshire is beyond wild hope and the surreal first couple of days make the hundreds of birdless days and miles seem a distant memory. 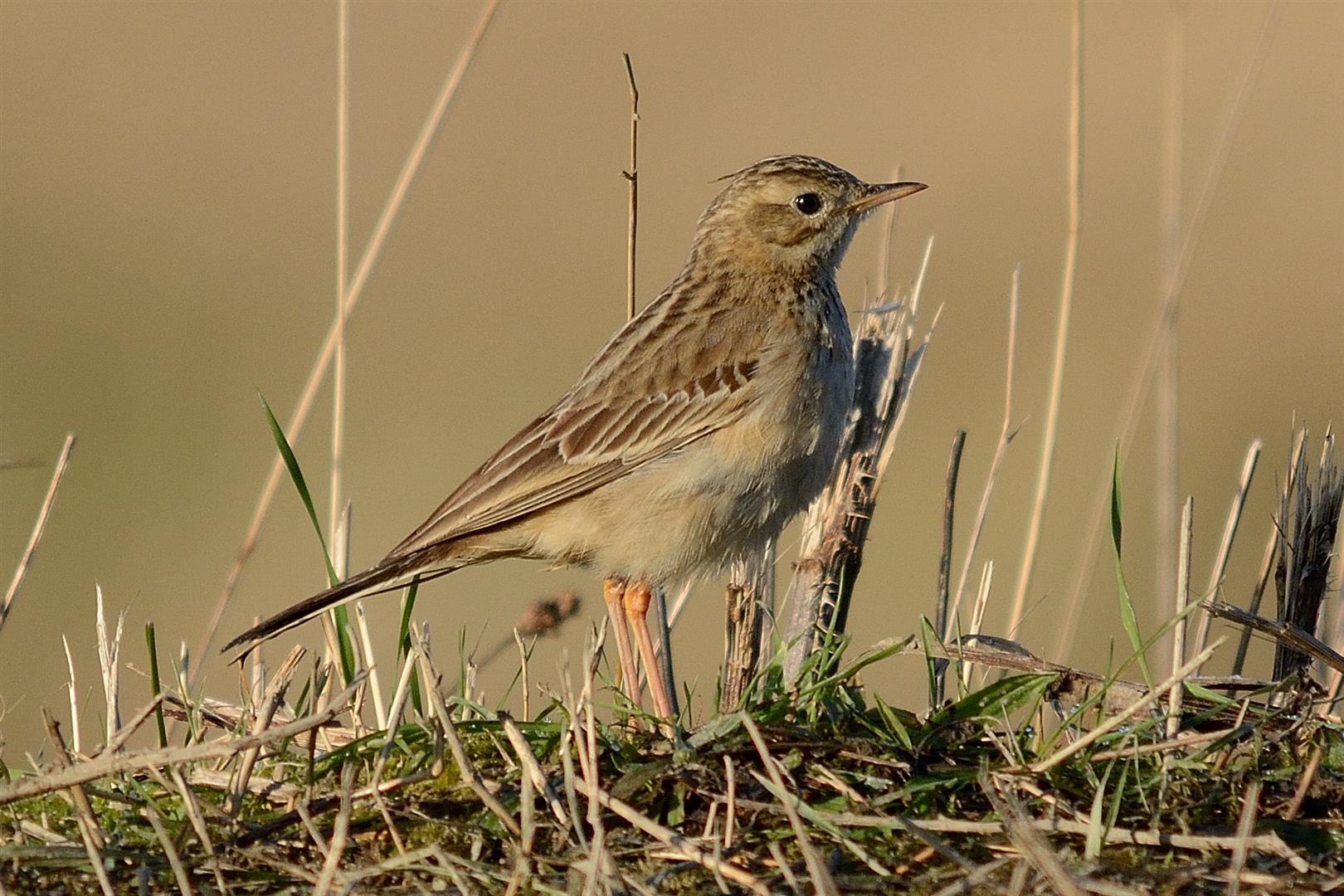 Fast forward to 28th. Photos had surfaced of a pretty convincing looking Thayer's Gull candidate only a few miles away. During the following morning we obtained good views and the identification was firmed up. We discussed the possibility of the bird roosting at Pugney's but surely lightning would not strike twice? Well, Garry Taylor located the bird in the roost early in the evening and about 200 people were able to make it before dark. A Thayer's Gull! The debate about the ID and species status are for another place — this was potentially another first for Yorkshire on my patch! So often you hear of the bizarre Nearctic/Siberian combinations, usually on Scilly or Fair Isle, but here was one in sight of Wakefield town centre! So another 5 points in the bag (and patchers will appreciate me not missing out the Red Kite that flew over the Blyth's on 14th) and I now have only incredible memories tinged with a nagging thought in my mind, namely...what have I done to my comparative score?!?!

So that was my year — pretty amazing! Despite the many highlights there was no Marsh Harrier, Black-necked Grebe, Crossbill, Osprey, Turnstone, Cetti's Warbler, Scaup...the list goes on!

To all you patch workers out there — good hunting and here's to 2015!