Despite the fact that several contestants spent at least some of the month birding off-patch, October was truly a month to remember for the Patchwork Challenge. If you thought September was good, then October was truly excellent!

Rare birds are inevitably high on any birder's agenda during October but to start off, let's have a look at events at the other end of the scale. There were some real snippets of patch gold on the Northern Isles, with the autumn influx of continental Great Spotted Woodpeckers scoring patch ticks for both Shetland patches. Gary Bell at Sumburgh also listed Greenfinch among his highlights this month — along with one or two more memorable things of course! At the other end of the country, a Treecreeper brightened up Thorpeness Caravan Park in Suffolk, and across to the west, Steve Stansfield's Pintail on Bardsey Island merited a full five exclamation marks on our scoresheet! Paul Higson's Goldcrests on South Ronaldsay were perhaps more vented frustration than patch gold, though... 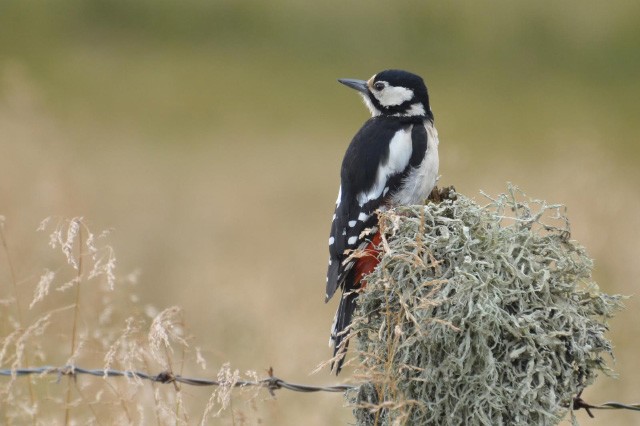 Fortunate inland patchers claimed some species that even coastal birders would have been very happy with. A Great Skua was a great find at Stocks Reservoir, and a Pectoral Sandpiper no doubt brightened up Ali Shuttleworth's day at Cullerloe. Linford fared best of the inland sites though, with both Eider and Leach's Storm-petrel turning up there. In fact, Leach's were seen on several patches, with East Anglia particularly well represented. There were plenty of littoralis Rock Pipits on the move, a number of inland sites listing them among their monthly highlights.

Other recurring themes on the scoresheet were decent numbers of Shore Larks, Siberian Chiffchaffs and, perhaps predictably, Yellow-browed Warblers. At least nine patches scored the bonus points for this ever-more-familiar sprite — definitely no longer rare, but always a joy to see! Special mention though should go to our two inland patchers who managed Yellow-broweds: Marek Walford at Dinton Pastures, and Dave Roberts who found one at Marston Sewage Works, a first for the site.

So, on to the real goodies! We'll start with a roll-call of the great birds that turned up on patches but where unfortunately the finds bonus has eluded PWC contestants. A Pied Wheatear was on Bardsey Island, and on Shetland, Rob Fray caught up with his fourth patch Pechora Pipit, no less. A bunch of Glossy Ibis toured a series of Norfolk patches, but the best of all was only seen from a sole patch in the county — Simon Chidwick received news of a Black-browed Albatross passing Overstrand while he was looking for a Pallid Swift! 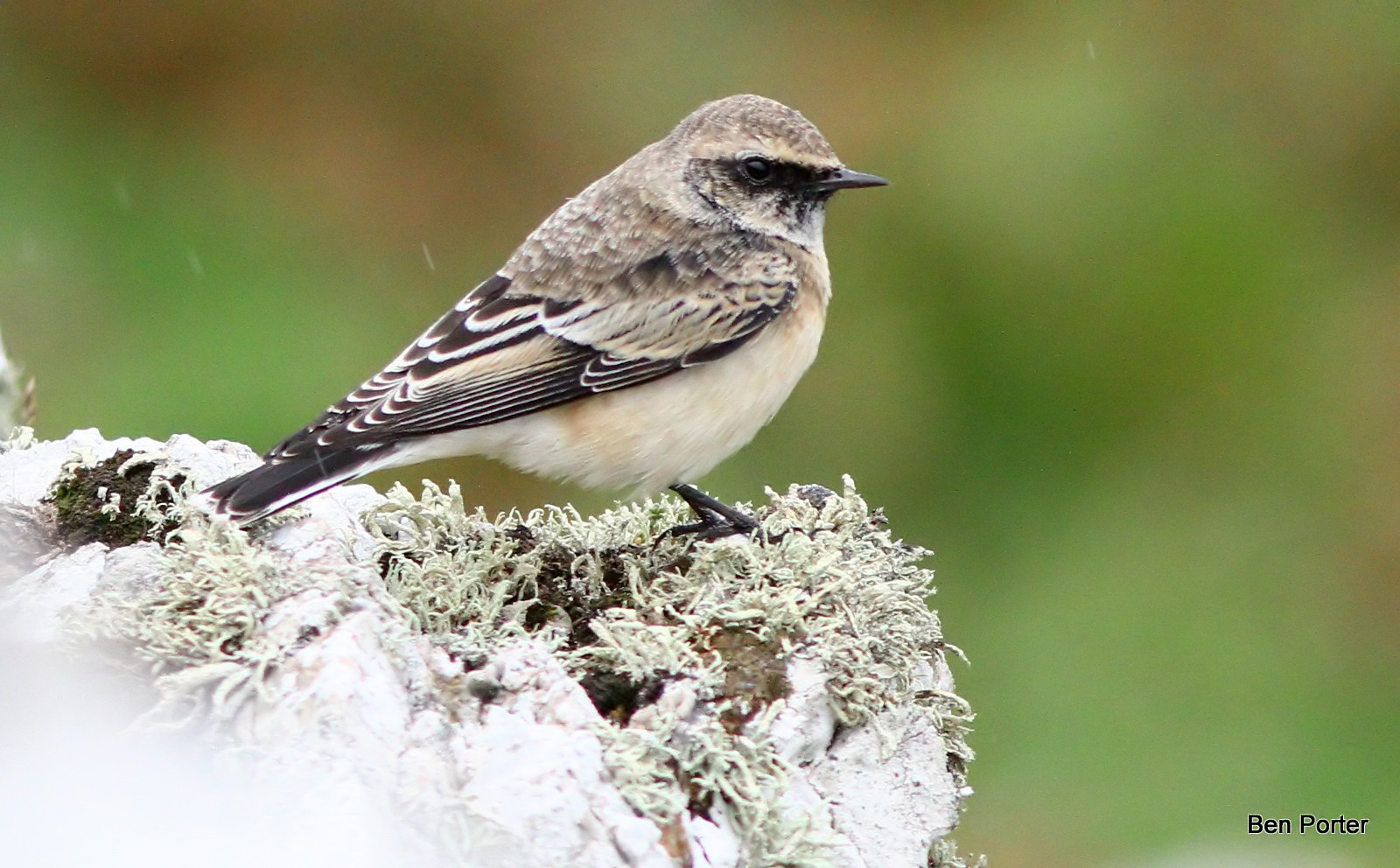 There were plenty of great finds as well. Parrot Crossbill and Pallid Swifts were found on multiple east-coast patches, as were Pallas's Warblers. In the north there was a Snow Goose, and to the west there were both Baird's and Semipalmated Sandpipers. The south stole the show though, and indeed special mention should go to Andy Johnson. During October, Andy found Dusky Warbler, Red-breasted Goose and, to top it all off, the Semipalmated Plover! This would have course been the undoubted bird of the month but for Sean Morris looking out of his window on Rhum and clapping eyes on a Mourning Dove! Breathtaking stuff and a month that will linger in the memory for many. It'll no doubt make the forthcoming polling for the Meopta and Forest Optic best find competition interesting... 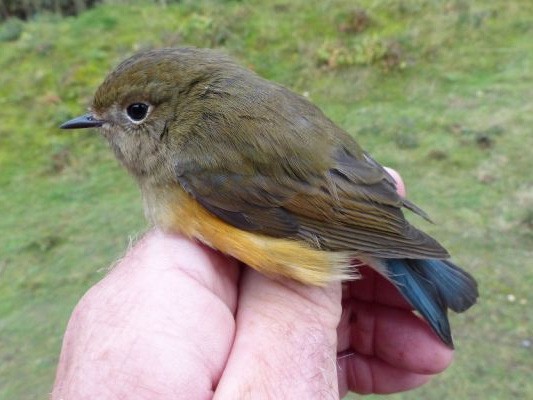 Red-flanked Bluetail: just one of the many great finds on PWC patches in October (Photo: Moss Taylor).

The addition of all of these rarities took our cumulative list to a cracking 311 species, which of course translates as £311 donated by Meopta and Forest Optic to the BTO's Out of Africa appeal. If you want to have a look at the mouthwatering list of species we've accumulated over the course of 2013, you can see it here on BUBO listing.

Naturally, with all of these new species, plenty of bonus points and a couple of 15-pointers, it's well worth having a look at the Top 20s. Moss Taylor leads the points table again — no doubt aided by his Red-flanked Bluetail — though a host of patchers with a string of rarities to their names follow in his wake. Ryan Irvine deserves a special mention too: having moved to Hemsby last year and taken a bit of a punt on a new patch I think it's fair to say he's made a good decision. 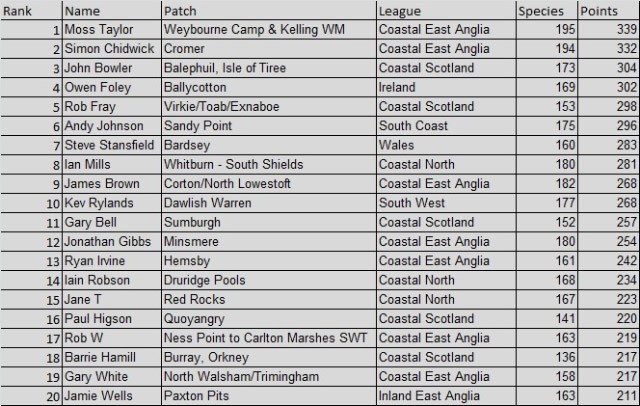 It's no great surprise that the species league reads in a very similar fashion to the points league! Moss leads the way there too, but at the moment he's only one species ahead of Simon Chidwick. 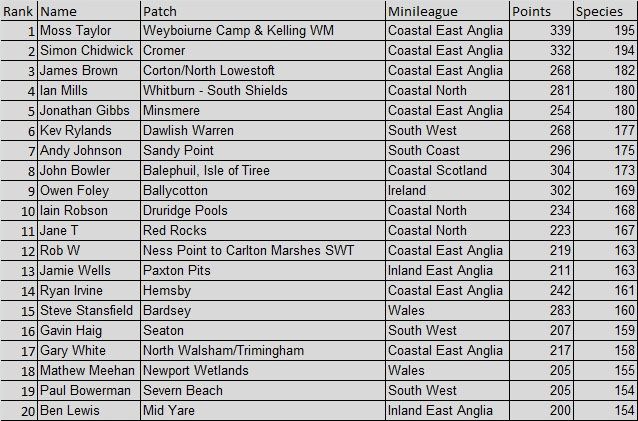 Inland it's a different story — some real graft must have gone into those 150 species/200+ point patches, so a big hand to Jamie Wells and Ben Lewis. 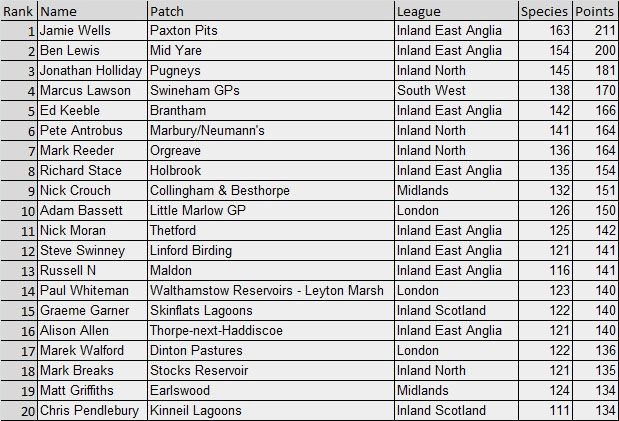 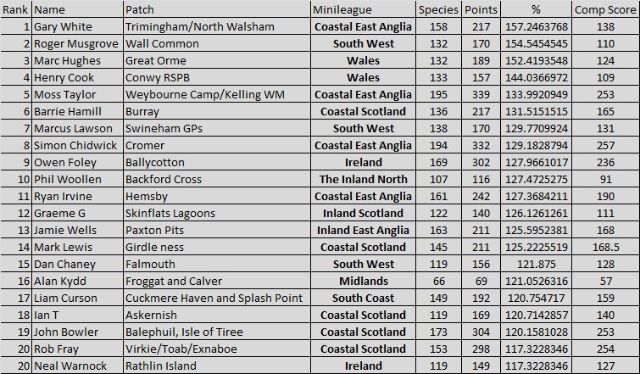 And finally, Mark's favourite league, the points-per-bird. It's no surprise that a Shetland patch heads the way here: a points-per-bird score of two or more would be an incredible achievement, so good luck to Rob Fray for the rest of the year. 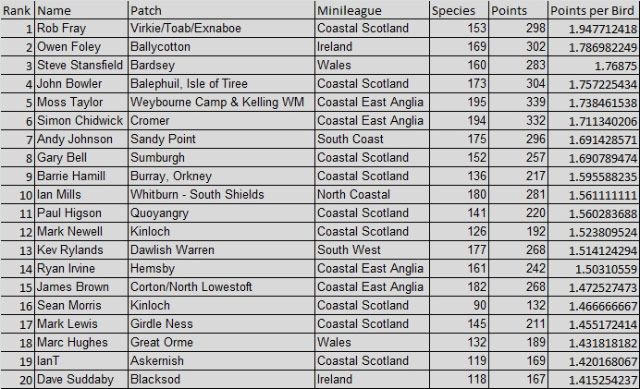