A quieter February was always on the cards after the newness of January. Despite this, the challenge has been widely embraced again and with over 320 patches recording scores so far it is the biggest year yet. If you haven't got going yet, there is still time to hit the patch and get involved in one of the most rewarding birding experiences out there — learning what is on your doorstep. It is probably a lot more diverse than you realise.

The best bits of one of the least valued months in the birder's calendar were really quite decent. Find of the month goes to new entrant and NGB member Laurie Allnatt, who managed to turn up a superb Bonaparte's Gull at Llanelli WWT. Regular birds in several locations slightly devalue this species but a new bird is certainly worthy of plaudits. The other big find for February was a Lesser Yellowlegs at Skibbereen for Julian Wylie in West Cork: a superb one to get on the combined list for our year-listing challenge, but possibly not good enough to make the cut for the Bresser & Forest Optics (www.marchwood.co.uk) Best Find Competition. The final part of the high-quality triumvirate wasn't actually from February but a wintering Dusky Warbler found by David McGrath at Marton Mere in January. A few individuals of this classic late-autumn skulker overwinter, but it is a superb record for the North-West and shows what a bit of patch perseverance can do.

There was a good sprinkling of patch padding this month, with three-pointers from plenty of patches. It was the usual suspects in terms of flavour, with gulls and ducks featuring widely. Three patches managed to turn up Great White Egrets — or in Dave Craven's case, three of them at Pickering Pastures. Others were at UEA and Frampton RSPB. Arlo Jacques managed to find the only Spoonbill of the period at Tramore Backstrand, where there is also a wintering Glossy Ibis. Common Cranes in East Anglia are no surprise, but one for Garry White at North Walsham would certainly have brightened up a February day. 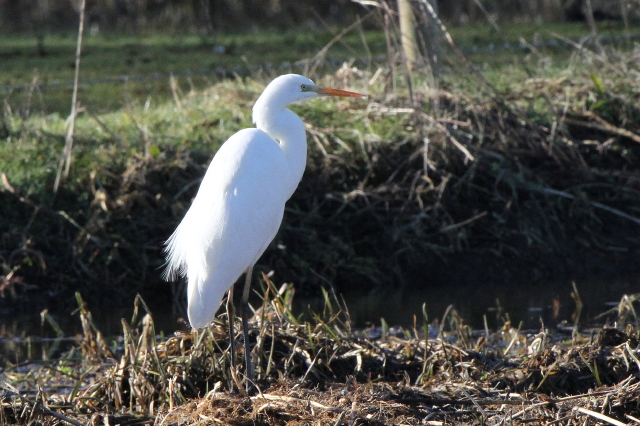 A wintering Surf Scoter at Musselburgh failed to garner points, as it turned up in late 2014, but the finders of Green-winged Teal at Balivanich and Ninch were more fortunate. Two patchers in Ireland managed to find Yankee gulls, but these were both of the relatively low scoring Ring-billed variety. Jim Dickson managed to find a White-tailed Eagle on his Kintyre patch — presumably a species that will become increasingly common on the mainland in the west of Scotland. Further raptorial quality came in the form of a Rough-legged Buzzard for Tim Hodge at Horsey. 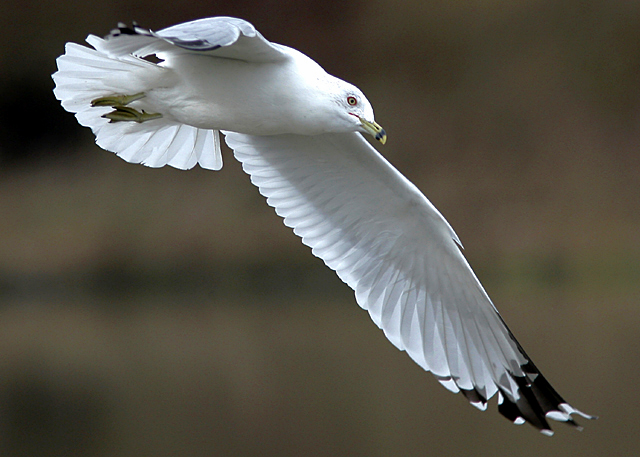 Two patchers registered self-found Great Grey Shrikes, with one for Benjamin Ward at Aubourn and a second for Matthew Dick at Darley Dale. The final bonus points of February, for a Siberian Chiffchaff, came on a plate to Joe Stockwell as one visited his garden in Dorset. 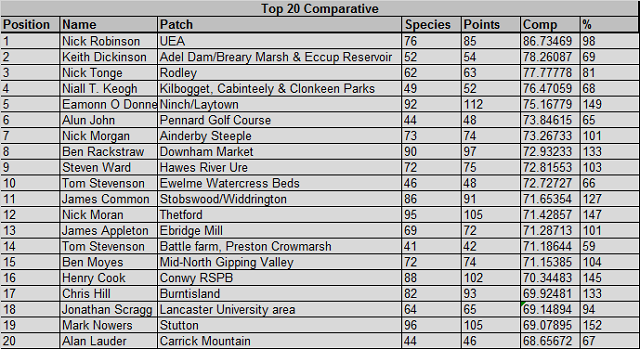 Nick Robinson heads this month's Comparative minileague with a mighty 86.7% at UEA, Norwich. Nick has taken part since PWC's inception and his heady score is well deserved. Keith Dickinson failed to add much to last month's score but remains in second place thanks to his quick start. Rounding off the top three is Keith's local rival from across Leeds, Nick Tonge, who patches Rodley and despite the reserve's limited opening times has scored well. Unsurprisingly it is the inland sites which profit most early in the year, so Eamonn O'Donnell's start at the coastal Ninch and Laytown in County Meath is particularly impressive. 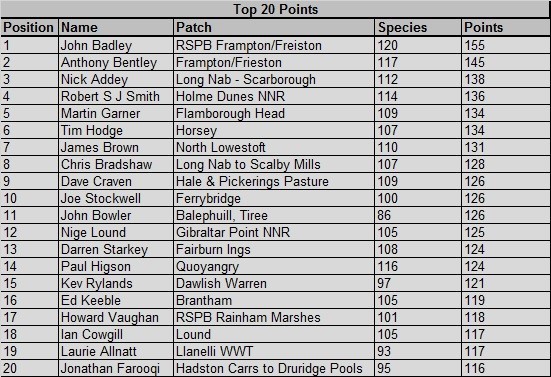 For those new to the competition a good placing in the Points tables is all-important, and several newcomers are present in the Top 20. Frampton and Freiston feature twice, both in the top two, and with a number of patchers at both sites the competition will be fierce. John Badley is top dog at present with a princely 155 points. He will have to score heavily to hold top spot for much longer as the traditional high scorers start to see returning migrants in the spring. Anthony Bentley is top NGBer and holds overall second place. Rounding off the podium positions is Nick Addey at Long Nab, Scarborough, who is outscoring local rival Chris Bradshaw in 8th. 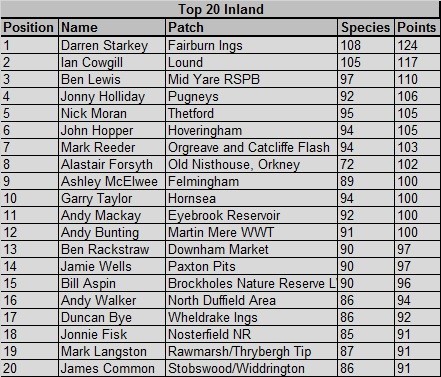 For those without the benefit of a coastline there is the Inland Top 20, and last year's fourth-place finisher, Darren Starkey, is leading the way from Fairburn Ings. Ian Cowgill at Lound is in second place, while Ben Lewis who patches Mid Yare RSPB reserves is in third. 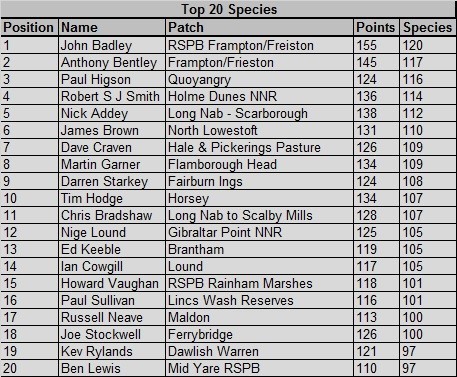 Diversity is key in the Top 20 Species minileague, and John Badley heads up here as well with 120 species while Anthony Bentley is on 117. Paul Higson on Orkney has managed to tally 116 species — a superb total on the Northern Isles before spring has arrived. 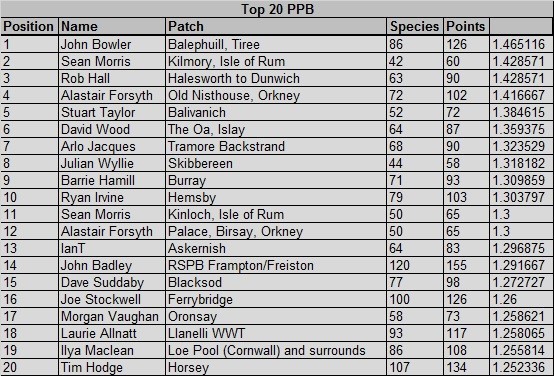 The Top 20 Points per Bird minileague is always an indicator of who is having a purple patch. Routinely near the top is bird-finder extraordinaire John Bowler and he is number one thanks to January's American Herring Gull as well as a handful of scarce birds. Sean Morris on Rum has managed plenty of quality, if not quantity, at his Kilmory patch to take second place. A high-scoring start at Dunwich for Rob Hall has seen his patch register the highest mainland PPB so far. 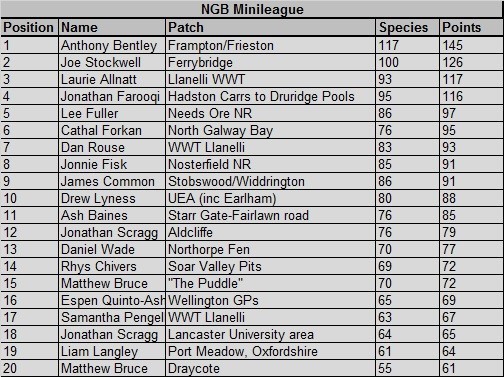 The NGB Top 20 is more competitive this year with 29 patchers fighting it out this year in the Under–25s. Anthony Bentley is in pole position for the Cameron Bespolka prize at the moment, although Joe Stockwell and Laurie Allnatt in second and third respectively will be doing their utmost to prevent that. 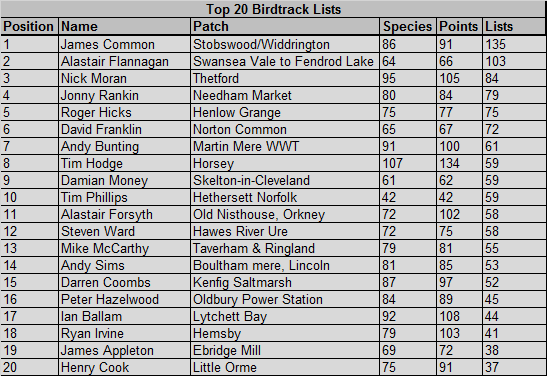 James Common at Stobswood is leading in the BirdTrack Birdrace thanks to an influx of geese and raptors to his Stobswood patch encouraging him to visit extensively, and he has logged a whopping 135 complete lists. Alastair Flannagan has also broken the ton with 103 lists, while the BTO's own Nick Moran lies in third place with 84 complete lists. 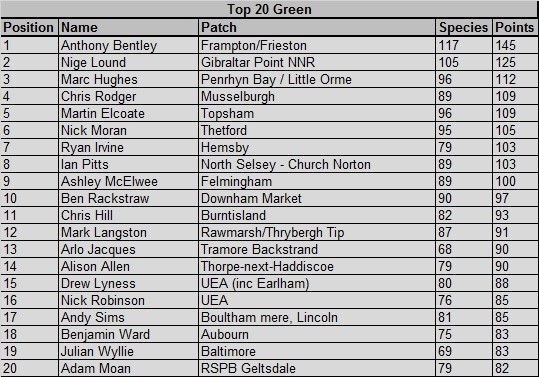 For those that like to patch without petrol there is the Green minileague, sponsored by the Sound Approach (www.soundapproach.co.uk), and somehow Anthony Bentley is top here — he must be sleeping in the hides at Frampton! Fellow Lincs patcher Nige Lound is in second with 125 points and Marc Hughes at Little Orme is in third place.

So that's the first winter period over and reports via the Patchwork Challenge Twitter feed and Facebook groups indicate that the arrival of Northern Wheatears, Sand Martins, Garganey and Little Ringed Plover have been shared by many patches already across the country. Who will find the first mega of the patchwork year? Will somebody manage a Great Spotted Cuckoo before March is out? Surely there must be some Alpine Swifts in 2015 after a blank spring for them in 2014!