Most travelling British birders take in India as soon as they can, but for me it never happened. My wife Beryl suffered life-threatening kidney problems some years ago and she tends to avoid upset stomachs: stories of the dreaded "Delhi Belly" were enough to prevent us both from making the trip. Anyway, at last a few good travelling friends prompted me to organise a visit earlier this year using Indian Nature Tours. We set off in late January heeding lots of advice on how to avoid tummy problems. "Drink and clean your teeth in beer and stay vegetarian" advised Bill Oddie, which I did and survived.

Arriving in Delhi was exciting as well as slightly scary when we realized all vehicles including bullock carts aggressively went for every gap in traffic, and kept their hands on the hooters permanently. After a tentative meal we lined up at Delhi Railway Station to board our 4.50pm train to Ranthambore. Even in these unlikely surroundings the bird list began, with White-throated Kingfisher, Black Kites (of course), Black Drongo, Red-vented Bulbul, Indian House Crow and Bank Myna. Five hours later and surrounded by what seemed like the whole of humanity we realised that despite the enthusiastic announcer our train was not coming and we faced an uncomfortable journey of thirteen hours by road. 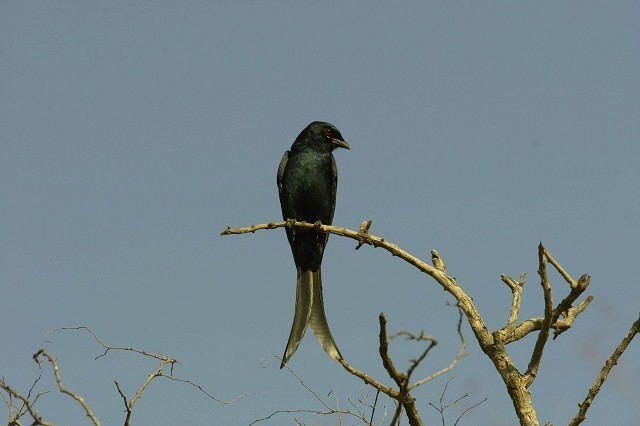 This we did, and although sleeping on a bus with our and other drivers hooting their way through the night was tricky we managed to reach dawn still with some enthusiasm. This was not in vain, as a "toilet stop" in an agricultural area immediately brought bonuses. First a group of 50 Indian Coursers was enough to plug bladders for a few more minutes, whilst Yellow-wattled Lapwing, Singing Bush Lark, Hume's Short-toed Lark, Bay-backed Shrike, Brahminy Starling, Spotted Owlets and Common Babbler were all sufficient to pump adrenalin until we reached our destination Ranthambore. 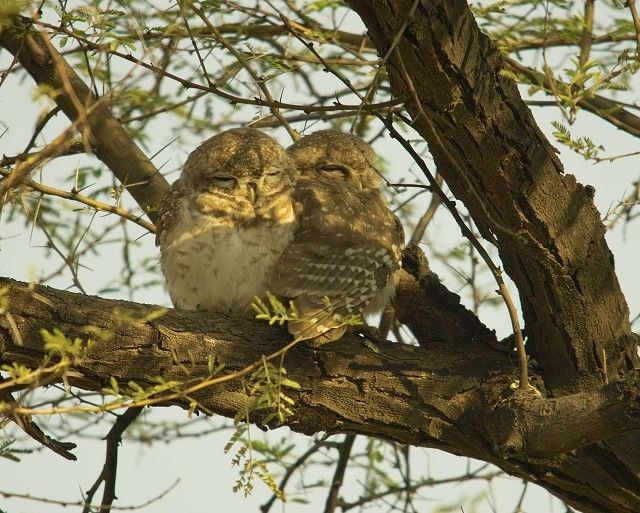 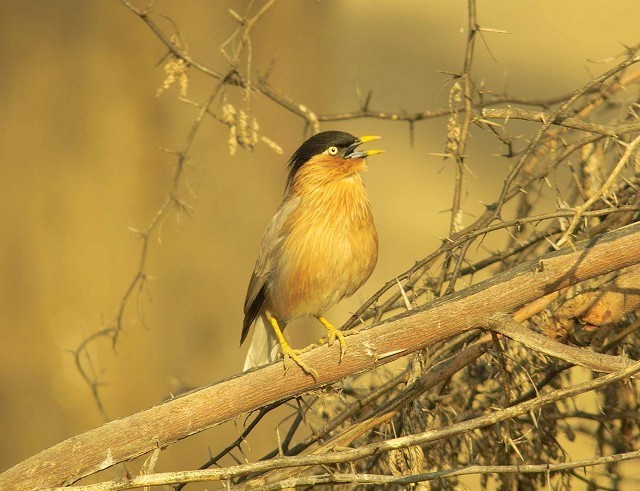 Ranthambore was one of our two chances to see Tiger, one of the main objectives of the trip. We had lost one of our scheduled drives because of the train delay, but four were still available. Apart from the first, they were all mainly in the same area, comprising wetlands and dry forest. Plenty of Wild Boar, Spotted Deer and Sambur were around, the latter often feeding in the water with Indian Pond Herons sitting on their haunches. As the animals stirred up the water, the herons leapt off to grab a fish. A few Nilgai were also encountered. The lakes contained good numbers of Bar-headed and Greylag Geese as well as Ruddy Shelduck, Teal, Shoveler and Pintail. Waders fed at the muddy edges and contained familiar species like Greenshank, Spotted Redshank and Wood Sandpiper as well as less familiar birds like Red-Wattled Lapwing. A few glorious Painted Storks frequented the shoreline as did large goggle-eyed Great Thick-knees. 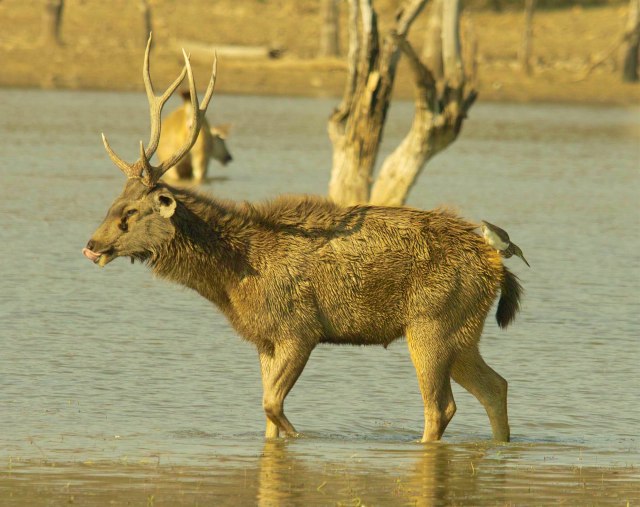 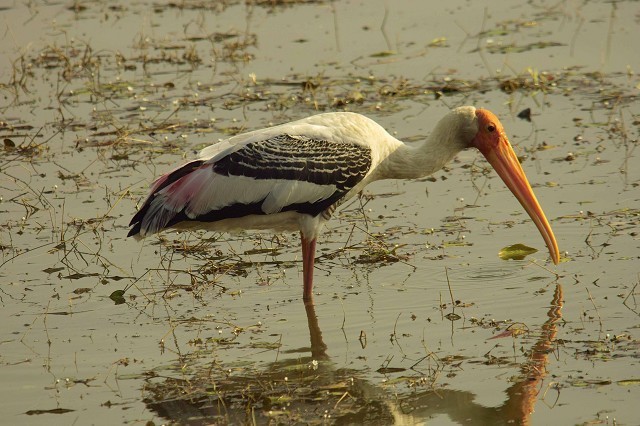 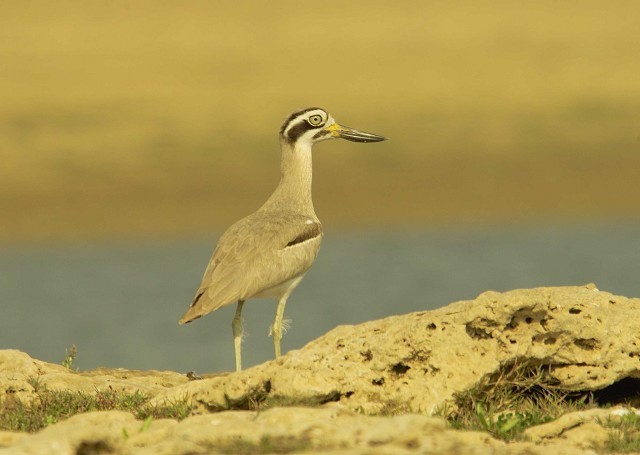 Rufous Treepies were extremely pushy begging for food, and flocks of Yellow-footed Green Pigeons sat around in the treetops. Indian Jungle Crows kept a noisy watch on us, Alexandrine Parakeets called loudly from dead trees submerged in the water and Grey Francolins called incessantly around us. The woods themselves contained a number of species including Oriental Magpie-robins, Jungle and Large Grey Babblers and woodpeckers including Black-rumped and White-naped Flamebacks. Smaller birds could be a problem but Hume's Warblers and Plain Prinias were identified. The most obvious were somewhat surreal; I can never get used to seeing Indian Peafowl hurtling through the trees at dawn and feeding happily amongst herds of herbivores. 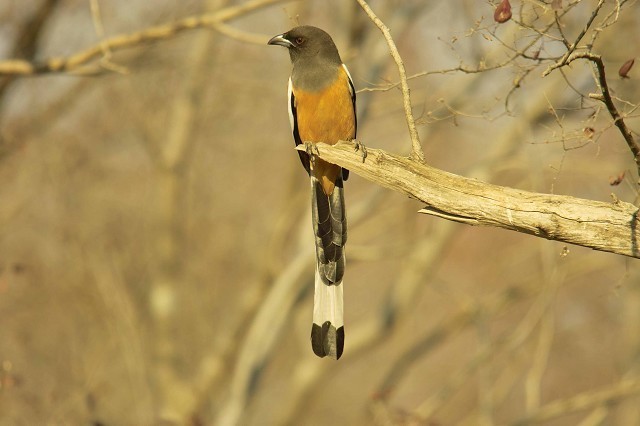 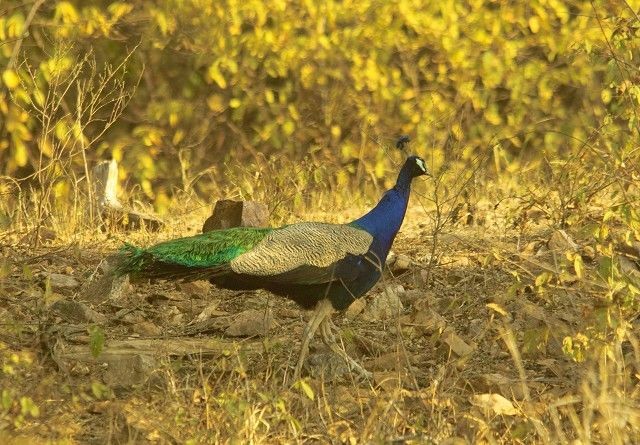 Raptors were obvious with Indian, Eurasian Griffon and Red-headed Vultures all being picked up overhead, whilst Shikra and Black-shouldered Kites were a regular sight. Crested Serpent Eagles were probably the most numerous raptor, sitting around in the trees and allowing a very close approach. Also overhead Dusky Crag Martins flew along rocky ridges.

Well, we got to our final drive without having had a sniff of a Tiger. On that final morning we were out in the Park by first light and were greeted by a loud and somewhat scary roar that flushed a Purple Heron from distant reeds. It was very misty and we could not quite see the far shore. More roars came, and our guide and driver became very agitated. They were urging us to train our binoculars into the murky distance. Then suddenly a large feline shape emerged into the water and began rolling about. Our guide explained that mating had been taking place and that the animals always wash immediately afterwards. Then the animal disappeared, leaving us wondering if that was that. No — our wonderful driver eventually took us down a small track where Hanuman Langurs were very vocal, hurling bits of branch to the ground. Suddenly we rounded a corner to find a female Tiger fast asleep and an enormous well-fed male sitting staring at us. He got up once as if to satisfy our lust for better photographs and then relaxed again. We quickly left these magnificent creatures, reflecting on how privileged we had been to see them at all. 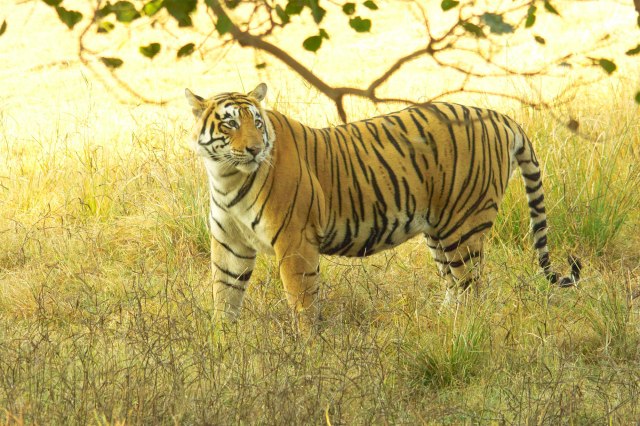 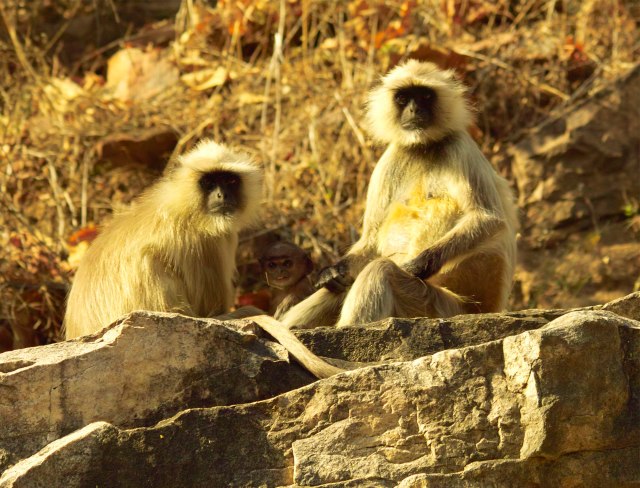 As we left the Park for the last time, we were able to watch some skulking Painted Spurfowl before going off to bird the arid lands outside the Park. Wandering around some very sandy areas we discovered Ashy-crowned Finch Larks, Hume's Short-toed and Rufous-tailed Larks together with Brown Rock-chats and Isabelline Wheatears. We noted Southern Grey Shrikes and more Yellow-wattled Lapwings before finding groups of marvellous Painted Sandgrouse. The latter were so tame and allowed fantastic views. 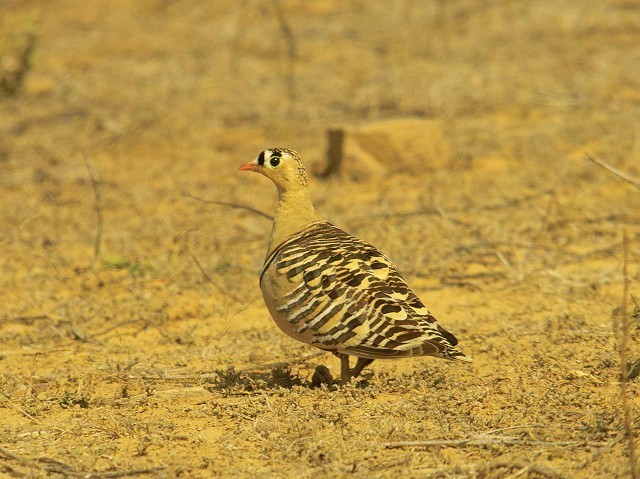 Our next venue was to be the world-famous Bharatpur. We were staying at the Sunbird Hotel and were up early to begin the next stage of the adventure. Assembling at the entrance, we were assigned to our rickshaws and introduced to our drivers. The next hour was very frustrating, as we could not set off because of thick mist. We amused ourselves watching House Sparrows. 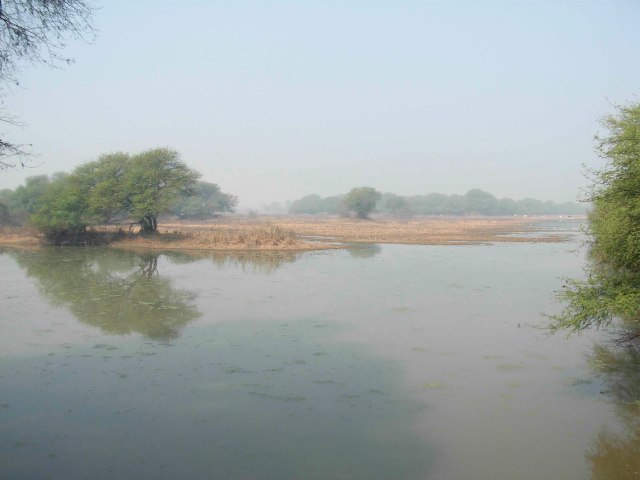 Eventually the sun broke through and we began our journey. The first bits of excitement were both mammals: first a Golden Jackal crossed the road then, as we looked right, a Jungle Cat stared back at us from some bushes. The first birds were a sizeable flock of Red Collared Doves and we stared into a thick bush to see an Indian Scops Owl; a Greater Coucal flew across the track. Apart from mist, the other negative was the lack of water at what is one of the world's great wetlands. It was some time before we found our first water, and therefore waterbirds. Immediately White-breasted Waterhens were the most obvious. An enormous Black-necked Stork and a Black-headed Ibis were feeding quite close and also a White-tailed Plover. There were groups of Bar-headed Geese and Ruddy Shelduck but also a small numbers of waders. We managed a group of four Marsh Sandpipers and some Avocets and a Temminck's Stint amongst commoner species. The lack of water was disappointing, and destroyed the image I had from TV documentaries and books. We pressed on and, looking up, identified both Steppe and Great Spotted Eagle, as well as Egyptian Vultures and a Peregrine. A female Pallid Harrier and a very obliging Black-shouldered Kite also attracted our attention. We progressed to another wooded trail where we saw Long-tailed Shrike and Large-tailed Nightjar and eventually found an enormous Indian Python happily asleep. Retracing our steps we enjoyed our picnic lunch with a very tame White-breasted Kingfisher and a Greenish Warbler. Before leaving the Park we worked a wooded area near the entrance and added a splendid Dusky Eagle Owl sitting on a nest and a Grey Nightjar perfectly camouflaged on an overhanging tree branch. 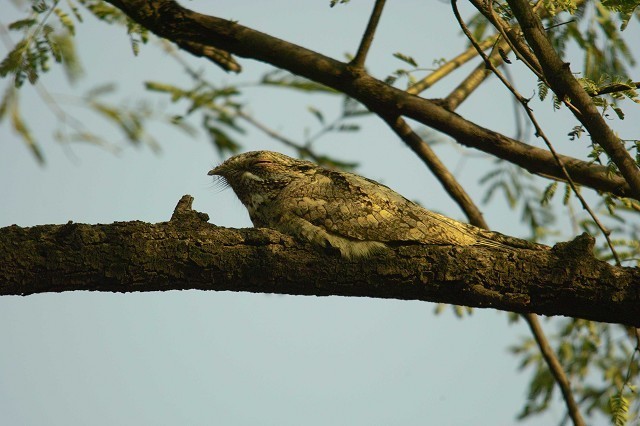 The following morning we were heading for a reservoir known as Baretta Bund. Here we were told there was much more water and we would find some of the birds we had missed on the previous day. We drove through agricultural villages and fields and stopped once to watch Crested Bunting, Baya Weaver and Plum-headed Parakeets. Pressing on to the reservoir, we walked down a small track to a bridge where we could scan for birds. We were immediately fortunate in seeing our only Grey-headed Lapwing of the trip. Scanning around we found plenty of Bronze-winged Jacanas, Ferruginous Ducks, Red-crested Pochards and an Openbill Stork. We retreated to the main dam to look at a different area. There were plenty of Lesser Whistling Ducks and Cotton Teal in this area and a few Pheasant-tailed Jacanas with the more numerous Bronze-winged. A splendid Black Eagle overhead was our only one of the trip.

Boarding the bus home, we had to screech to a halt pretty quickly as a splendid Cinnamon Bittern was picked out in a roadside ditch by one of our eagle-eyed observers. Just before returning to the hotel we were more than delighted to find a pair of Sarus Cranes, albeit a bit distant. 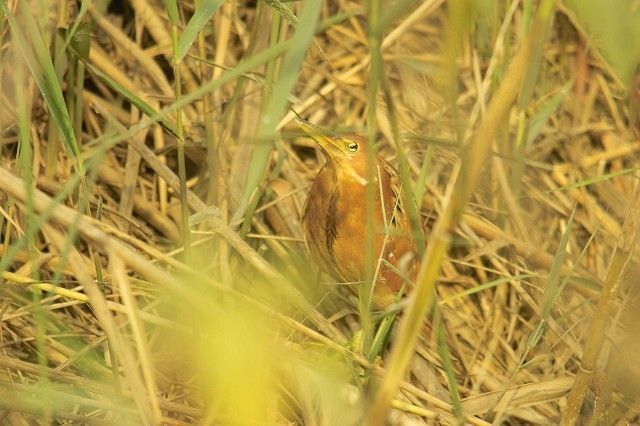 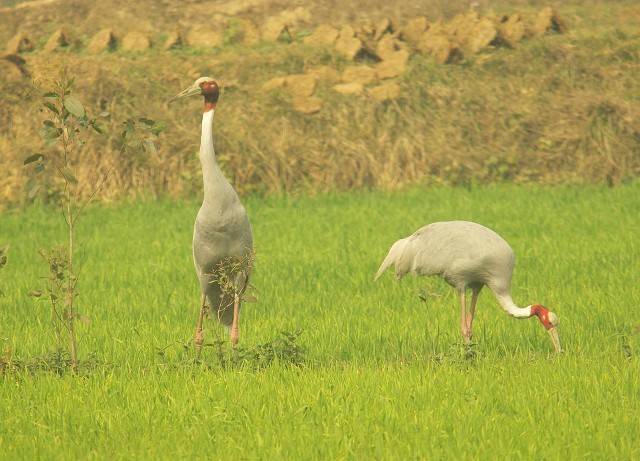 Later in the day we headed out to a very industrial area to a bit of wetland set in very urban surroundings. The site was full of rubbish, but even so there were large flocks of waders, mainly Ruff and Wood Sandpipers. As the light started to fade we staked out a small marshy area and were rewarded with a dozen Greater Painted Snipe at very close range. 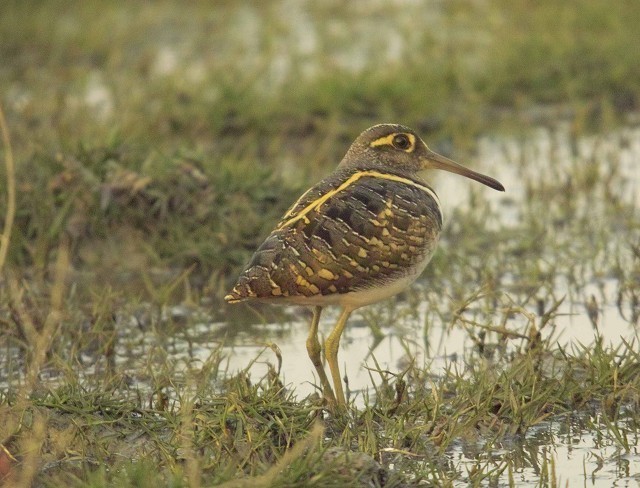 We left Bharatpur and journeyed on to Agra, where we made the obligatory stop at the Taj Mahal. I must confess to missing out on the tour inside the building, as I preferred to scan the river behind and find large flocks of Eurasian Spoonbills, Painted Storks, Pallas's Gulls and my first River Lapwings. 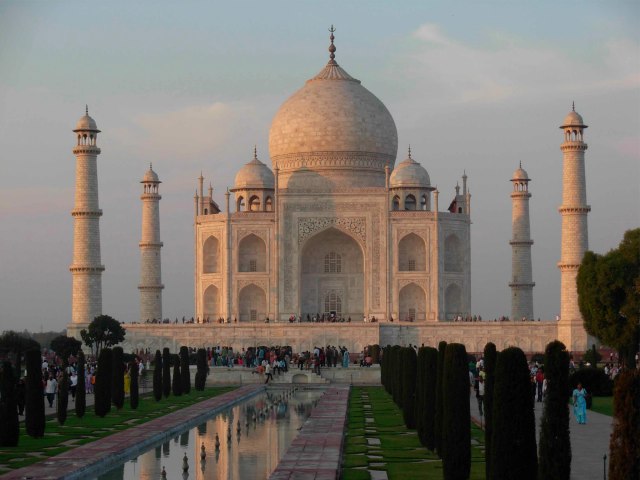 The next part of our adventure was a boat trip on the Chambal River. We were to have an overnight stop at the Chambal Safari Lodge. Before darkness fell we found a Brown Hawk Owl roosting, and were pleased to find a number of Indian Fruit Bats in trees above our cabins. We were up early and down to the river to board our boat. En route, a couple of Oriental Honey Buzzards flew across the road. There was eager anticipation as we cast off and almost immediately we had stunning views of Black-bellied Tern, three Small Pratincoles, two Indian Skimmers, Greater Thick-knee and more River Lapwings. Moving further along the river banks we soon had our first views of the wonderful prehistoric Gharials. These amazing thin-snouted crocodiles stunned us by their large size. Marsh Muggers were also present, seemingly ignoring the flocks of Lesser Whistling Ducks. We saw more wildfowl, including Spot-billed Ducks, Comb Ducks as well as the usual Ruddy Shelducks and Bar-headed Geese. Further on an Osprey landed on the beach and a Bonelli's Eagle and a Long-legged Buzzard cruised overhead. Coming to some small islands, we enjoyed great views of River Terns before finding a White-capped Bunting by the shore. We waited a while to see River Dolphins but only achieved frustratingly brief views. Turning back along the other shore, where Little Cormorants were drying their wings, we found a splendid Indian Black Ibis, and had glimpses of a Brown Crake as it played hide-and-seek behind a wrecked boat. On landing we just had time to spot a Sand Lark on the opposite bank. 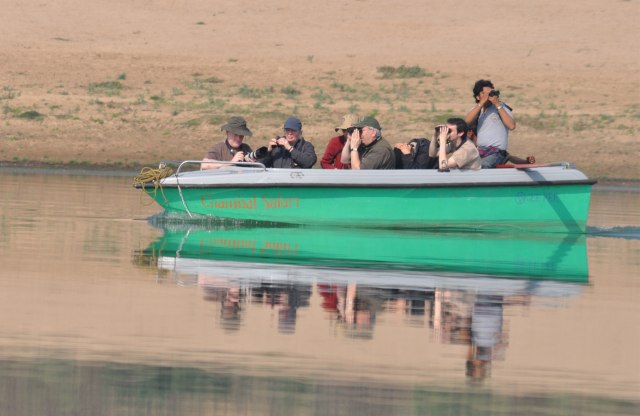 The author enjoying a boat trip on the Chambal River (photo: Ian Spence). 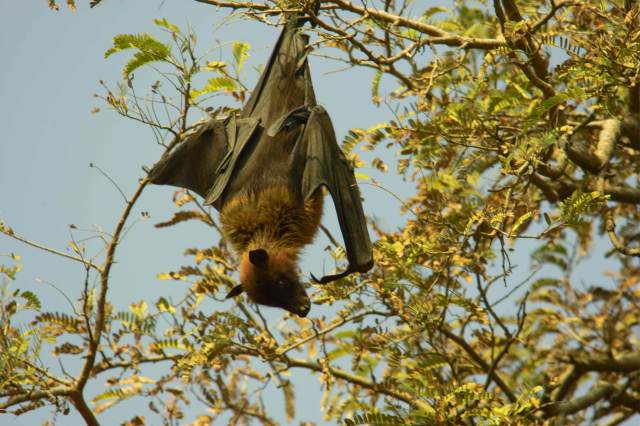 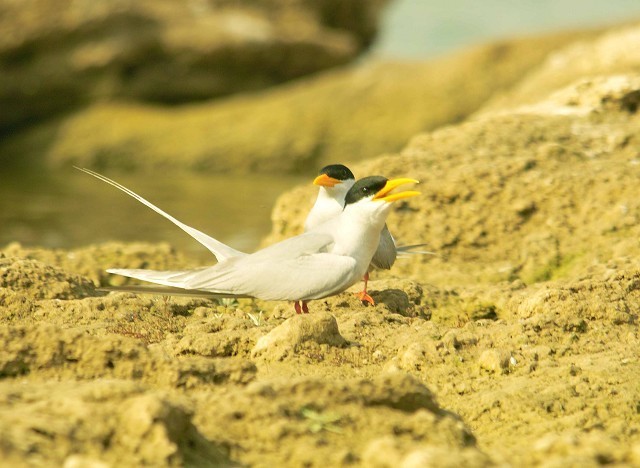 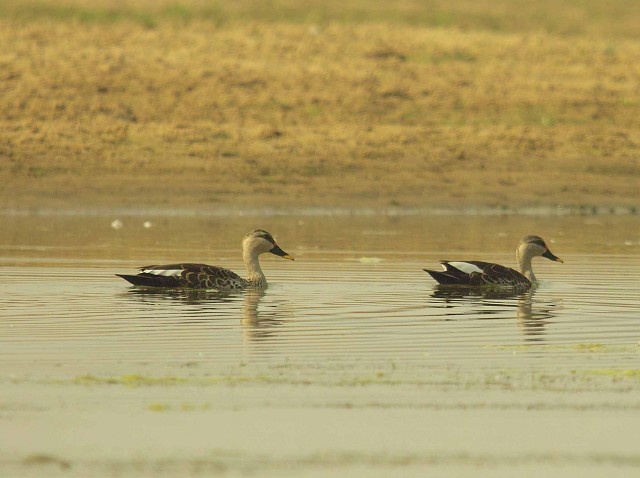 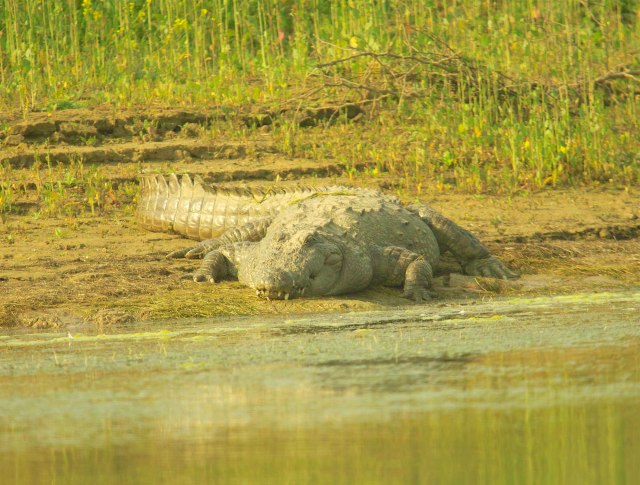 This river trip was one of the best I have ever experienced, but alas it was time to head back to Delhi before the second part of our adventure.

Derek is leading a tour to India next year to coincide with the Cricket World Cup, taking in the India v England match (amongst others). You can see the itinerary here.